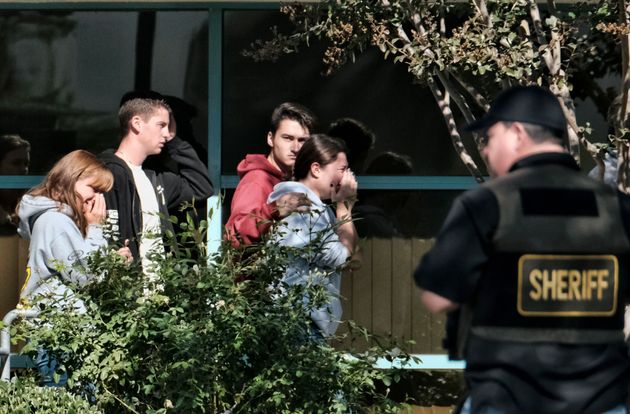 
Grieving people are led into the Thousand Oaks Teen Center where families have gathered after a deadly shooting at a bar on Nov. 8 in Thousand Oaks, California.

THOUSAND OAKS, Calif. ― Speak to young people across this community about the shooting that occurred at their favorite Wednesday-night bar this week, and you might get this gut-wrenching response: “I’m not surprised.”

Some students were simply “not surprised” to learn that 12 of their peers had been gunned down at Borderline Bar & Grill ― a hub for local students ― in an act of pointless homegrown terror.

“I feel like in this day and age, no matter where I go, I look around before I even relax,” said Shardonaye Moyes, 22, who attends Moorpark College. She was among several other students who spoke to HuffPost this week about the shooting that eclipsed the Thousand Oaks community’s much-lauded safety ― it was, after all, the third safest city in America this year by one count.

“You’re having shootings at elementary schools, high schools, college campuses. At a bar, it’s sad to say, but it’s not that surprising. It’s a tragedy and it’s really sad.”

For 27-year-old Chrystal Salas, a Moorpark College alum, the shooting was yet more evidence that, because of the gun violence crisis in America, there is inherent risk in just waking up in the morning.

“It makes me reflect on how you can’t go anywhere — you can’t go to your small-town neighborhood bar without fear,” she said.

Quotes like that are a lot more common these days, especially after the February shooting in Parkland, Florida, that left 17 students at Marjory Stoneman Douglas High School dead. Americans ― and especially young people ― see the horrific rate of mass shootings in this country, and are beginning to collectively show signs of dissociation and desensitization.

Drama therapist Jessica Asch spent her summer working with victims of trauma from Stoneman Douglas through two-week art therapy courses. Those students, she said, still have an acute fear of leaving the house every day, and some students’ level of dissociation can make it difficult for them to brush their teeth, let alone work on their schooling.

“Eating breakfast, brushing your teeth, getting dressed in the morning; these are things we take for granted, and these students struggle with immensely,” Asch told HuffPost on Friday. “Trauma dissociates you from your body and it takes a long time to integrate back.”

According to the American Psychiatric Association, dissociation involves “losing touch with awareness of one’s immediate surroundings.” Everyone’s experienced it, as it ranges from daydreaming to “mentally escaping from the fear, pain and horror” of a traumatic experience.

Evidence of such disassociation here is anecdotal, and Asch said that “everyone is different and I can only speak about the people that I work with.” The evidence of trauma in young people dealing with shootings on a near-daily basis, however, is well documented.

The constant barrage of shooting incidents can also have a lasting effect on all of us. One of the most jarring quotes after the Santa Fe High School shooting in May ― in which a gunman killed 10 people ― came from a student who said: “I wasn’t surprised. I was just scared.”

Paige Curry, 17, told reporters that she was three classrooms away from where her fellow students were getting murdered, hiding while she waited for authorities to arrive. By that time in May, there had already been 21 other school shootings in which someone had been killed or injured.

“I’ve always kind of felt like eventually it was going to happen here too,” she said.

Asch said it’s extremely debilitating ― even for a therapist ― to live with the understanding that another mass shooting can and likely will happen very soon, at any place. Quotes like Paige’s are signs of disassociation brought on by the barrage of bad news, and there is a lot of bad news.

“Staying in a constant state of panic is just too exhausting, so instead, people just have to turn it off,” she said. “The Parkland kids, they’re still so fearful. But others in the country are turning off. It’s too much work to wake up and say, ‘I might die today.’ That’s just too much for someone to handle. You end up dissociating.”

For many people, every mass shooting ― as common as they are ― can be re-traumatizing. In fact, as many as 30 people at Borderline bar during this week’s shooting also attended a music festival in Las Vegas last year at which a gunman killed 58 people and injured over 800 more.

The young people in the Thousand Oaks community ― and nationwide ― have to grapple with the fact that mass shootings now occur at places of worship, movie theaters, schools, airports, yoga studios, music festivals and anywhere else they might go when they walk outside their door.

In one sense, that knowledge may have helped; young folks know to escape quickly when they hear gunfire.

“Unfortunately, our young people or people at nightclubs have learned this may happen and they think about that,” Geoff Dean, the Ventura County sheriff, told The New York Times. “Fortunately it probably saved a lot of lives that they fled the scene so rapidly.”