The banker husband of an ‘amazing’ horsewoman found dead at her stables was last night being questioned by police in connection with her alleged murder.

Ann Marie Pomphret, 49, who volunteered at prestigious dressage events, was discovered with fatal head injuries at the remote stables near Warrington, Cheshire, on Friday night.

Her husband, David, 50, listed as an associate vice-president at Barclays on his online cv, was arrested on suspicion of murder and remained in custody yesterday.

The couple, who live in a £500,000 home in the village of Winwick, Cheshire, have been married for 21 years and have at least one daughter, Megan, 17. 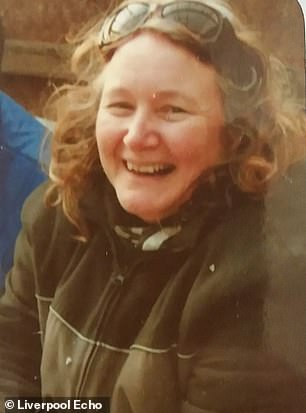 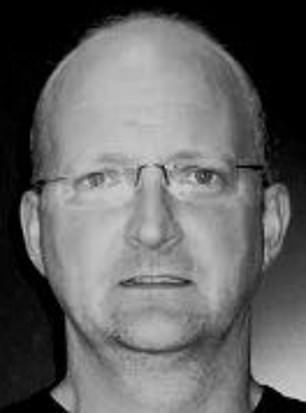 Ann Marie Pomphret (left), 49, who volunteered at prestigious dressage events, was discovered with fatal head injuries at the remote stables near Warrington, Cheshire, on Friday night. Her husband, David (right), 50, listed as an associate vice-president at Barclays on his online cv, was arrested on suspicion of murder and remained in custody yesterday

Forensic officers, including underwater search teams, have spent the past three days scouring land and a brook close to the stables for a murder weapon. Police were alerted at around 10pm on Friday but residents said they initially struggled to find the remote location.

One woman told the Mail that officers banged on her door saying they were looking for a casualty who ‘urgently needed CPR’ as they tried to find Mrs Pomphret, who was known as Marie.

Last night friends and family paid tribute to the former finance worker and civil servant, who was a registered volunteer with British Dressage and devoted much of her spare time to helping out at events and shows.

She and Megan, who took part in competitions and is described as a talented young rider, were both keen horsewomen and well known in the dressage community.

A stable owner and friend of the family, who asked not to be named, said police initially checked the hooves of Mrs Pomphret’s horses fearing she had been trampled to death. She described Mrs Pomphret as kind and generous and said her death has ‘hit us hard in the horse world’.

Neighbour David Lewtas, 57, said Mrs Pomphret was often seen ‘dressed in jodhpurs and riding boots’ and added: ‘Marie, David and Megan always seemed to do things together – apparently devoted to each other.’ 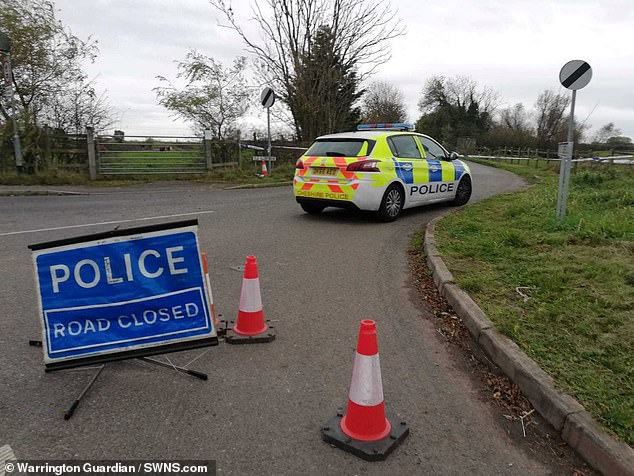 Ms Pomphret’s family have paid tribute to the ‘beloved daughter, wife and mother’. Pictured: The scene near Old Alder Lane in Burtonwood near Warrington, Cheshire

He said police had been searching the couple’s home, which was once owned by pop singer Kerry Katona and is around two miles from the crime scene, since the early hours of Sunday.

Mr Pomphret was also sometimes seen helping set up and score dressage events. On a social media profile, he describes himself as a ‘husband, father, geek, cyclist, keeper of horses, walker of the dog and lover of the great outdoors’.

In a statement, Mrs Pomphret’s family said: ‘Marie was a beloved daughter, wife and mother. She loved nothing more than spending time with her family out in nature, looking after their horses.

‘We are devastated that she has been taken from us so young and in such a senseless way.’

A woman, believed to be Mr Pomphret’s older sister, Alison, who answered the door at their elderly parents’ home in Southport, Merseyside, said they had been told little about what happened. 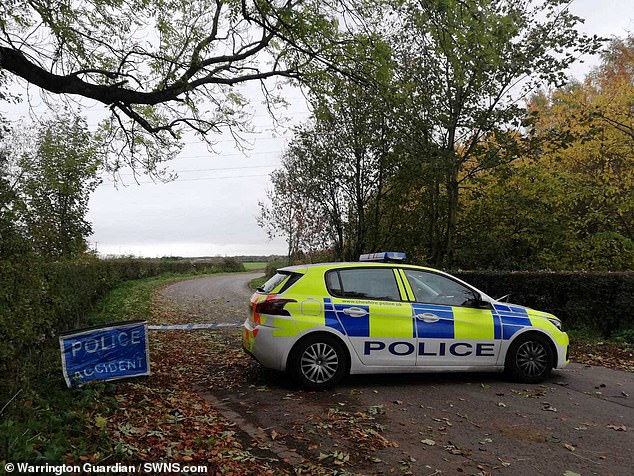 ‘My parents are in their eighties and do not want to talk about this,’ she said. ‘You can imagine how they feel but the police have told us very little. I know my niece is being supported by police.

‘There are officers with her wherever she goes. I really cannot say any more.’

It is understood Mrs Pomphret was an expert in quadrille – a dressage discipline where a minimum four horses perform to music – and regularly helped out at the Bolesworth International Horse Festival, a prestigious annual event near Chester.

Friends and colleagues praised her contribution to the sport. Debbie King, owner of Somerford Park Farm, an equestrian centre in Congleton, Cheshire, said: ‘Marie did so much for dressage.

‘She was incredibly knowledgeable about the rules, scoring, judging, everything to do with it.

‘She endlessly volunteered to help out at events – she gave so much of her time. She was an amazing, selfless person.

‘Megan was a talented dressage rider, but the sport was Marie’s life as well. They had a lovely relationship.’

A spokesman for Cheshire police said: ‘A 50-year-old man arrested as part of enquiries into the death of Ann Marie Pomphret on Friday 2 November in Burtonwood has been released on conditional bail.’

Detective Inspector Adam Waller said: ‘I’d like to reassure residents that we are working around the clock to investigate this tragic death and are following a number of enquires.

‘I am leading a team of specialist investigators from the Major Investigation Team as well as many other officers and staff from across Cheshire.

‘Specially trained officers will continue to support the family at this difficult time. If you have any information that may help, no matter how small you think it is, please contact us.’