U.S. President Donald Trump has a knack for dragging down his political adversaries with a well-deployed nickname.

Which is why it seemed curious this week that Trump would appear flummoxed when it came to maligning House Speaker Nancy Pelosi, his opponent du jour, amid the record-long partial government shutdown.

What pejorative would best burn Pelosi, the Democratic leader who has blocked him from getting the $5.7 billion he wants to build his border wall? What cutting moniker might he use against the 78-year-old grandmother who used her authority to deny him a State of the Union address before Congress?

In the White House on Wednesday, as he vented about Pelosi’s latest power move, Trump revealed to reporters what that nickname was. “Nancy Pelosi,” he began, “Or ‘Nancy,’ as I call her…”

And that’s the point, say political observers, who saw in Trump’s inability to launch personal attacks against Pelosi a grudging acknowledgment of her legislative power.

“He’s really stumped by her,” said Trump biographer Michael D’Antonio, who has interviewed Trump extensively for his book The Truth About Trump. “He hasn’t quite figured out how to fight with her. Pelosi is someone who I think has earned his respect.” 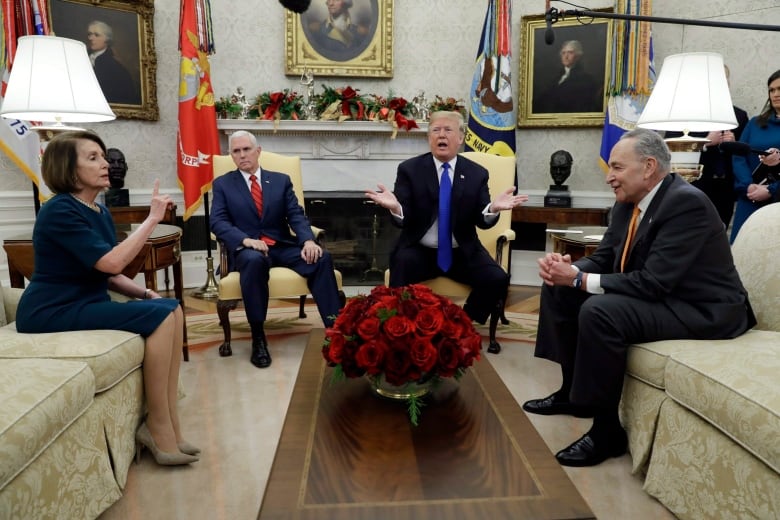 In a public meeting last month with Pelosi and Senate Minority Leader Chuck Schumer, Trump said he would be ‘proud to shut down the government for border security.’ (Evan Vucci/Associated Press)

The fact is, without her help leading the Democratic caucus, the president cannot end the current shutdown — a shutdown that has now entered its 35th day and is eroding Trump’s approval ratings, as well as caused two Republican senators to defect Thursday by voting for a Democratic bill to reopen the government.

Pelosi is a formidable opponent, with 16 years leading House Democrats. While former Republican House Speaker Paul Ryan often expressed his reservations to Trump, he ultimately did the president’s bidding. Pelosi has engaged in a fight.

“I think that impresses him,” D’Antonio said. “The way she wields her power. I think he respects her more than he ever respected Paul Ryan.” 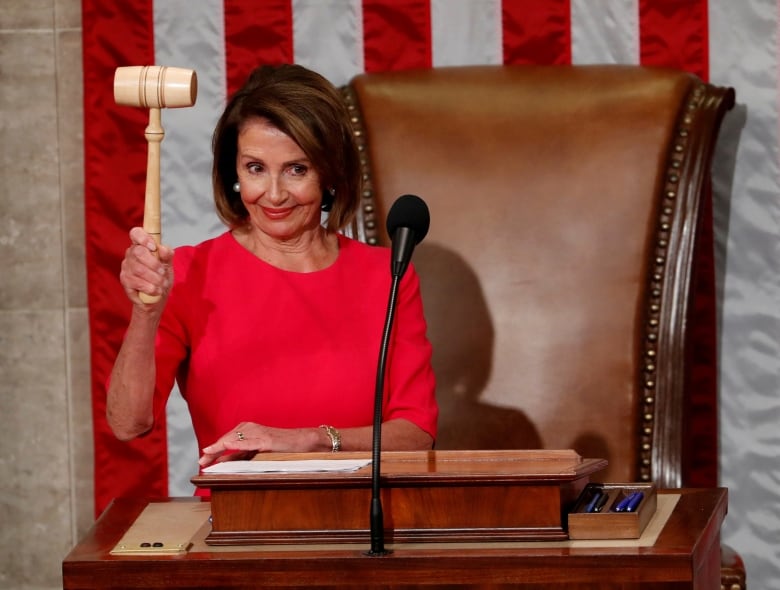 Pelosi raises the gavel after being elected as Speaker, as the U.S. House of Representatives meets for the start of the 116th Congress on Jan. 3. (Kevin Lamarque/Reuters)

That may be why the president has held his tongue so far on demeaning Pelosi, particularly now that the nation has a divided government, said Worth Hester, the assistant director of the Government Affairs Institute at Georgetown University.

“If you want something out of somebody, the last thing you do is piss on her shoes,” Hester said.

Pelosi has already punished members of her own party who opposed her speakership by depriving them of coveted committee assignments they had lobbied for.

She warned Trump about the new power dynamic in December when, during a tense meeting in the Oval Office, she declared: “Don’t characterize the strength that I bring to this meeting as the leader of the House Democrats, who just won a big victory.”

The president, who D’Antonio says has “never been good with collaboration,” appears to be catching on. Take for example his out-of-character concession on Twitter late Wednesday night.

After days of tit-for-tat between Trump and Pelosi that began when she requested that he delay his State of the Union speech until after the shutdown, followed by Trump’s insistence he would deliver the address anyway, Pelosi — who controls the lights and TV feed in the House chamber — took up Trump’s dare to disinvite him.

As the Shutdown was going on, Nancy Pelosi asked me to give the State of the Union Address. I agreed. She then changed her mind because of the Shutdown, suggesting a later date. This is her prerogative – I will do the Address when the Shutdown is over. I am not looking for an….

….alternative venue for the SOTU Address because there is no venue that can compete with the history, tradition and importance of the House Chamber. I look forward to giving a “great” State of the Union Address in the near future!

D’Antonio was also astonished by the tweet’s tone, its abiding by facts, and its sense of decorum.

“I didn’t think he was going to suddenly cave like that,”  he said.

The Trump biographer mused that the bickering over the State of the Union might play as a “proxy” battle in the larger fight over the wall that has caused this shutdown.

“If she had demonstrated that she can outfox him on this one, he has to be thinking she has many other moves to make that will surprise him.”

For now, Trump appears to be learning a lesson about the coequal branch of government, said Marc Sandalow, a politics professor at the University of California’s Washington Program, who has interviewed Pelosi dozens of times as a reporter in San Francisco.

“But the idea that Donald Trump is scared of Nancy Pelosi is too simplistic,” he said. Sandalow believes the president is likely getting a better grasp of her as a “tough tactician.”

“She does not tolerate people who challenge her power,” he said. “So it doesn’t surprise me that he has met a match in Nancy Pelosi.”

‘She doesn’t apologize for who she is’

Trump’s sexism and treatment of women is well-documented. And while the president has come toe-to-toe with assertive women before — most notably former U.S. secretary of state Hillary Clinton during the 2016 election — having to work alongside an opponent presents different challenges than attacking one as a pure political rival. 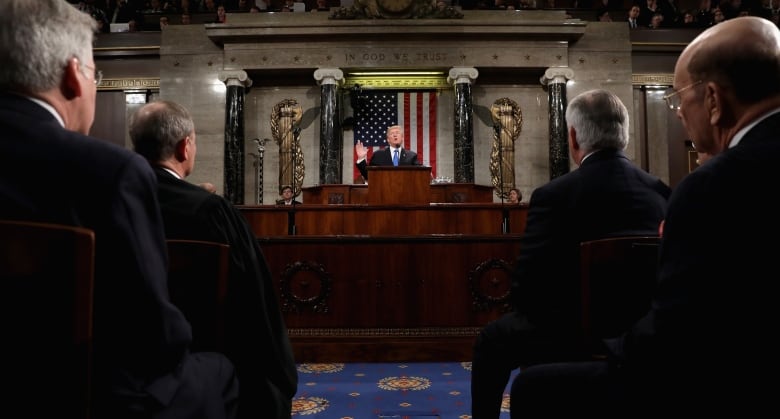 Trump delivered a State of the Union in the House Chamber last year. But exactly when this year’s address will happen is still unclear, as the partial shutdown drags into Day 35. (Win McNamee/Reuters)

Drexel University associate law professor Lisa Tucker, who interviewed Pelosi, her staff and family for a book, said that those who underestimate the Speaker do so at their own peril. Pelosi has risen to her post by prevailing over many powerful men in politics before the Trump era.

Tucker was reminded by what Pelosi once told her students when the Speaker was invited as a guest lecturer.

“She told them, ‘You can still have power and wear a pink suit.’ And I think that’s the essence of who she is. She doesn’t apologize for who she is, and she thinks of herself as incredibly worthy of holding that gavel.”

Polls indicate most Americans blame Republicans and Trump for the shutdown.

That’s not to say Democrats don’t have anything to lose.

With concerns mounting that a second week of missed paycheques for 800,000 federal workers would begin to put pressure on Democrats to acquiesce to Trump, Pelosi this week explained her party’s rationale for holding firm.

“We cannot have the president, every time he has an objection, to say, ‘I’ll shut down the government until you come to my way of thinking,'” she told reporters. “If we hold the employees hostage now, they’re hostage forever.”