The 4,500-kilometre rail journey from Pyongyang to Hanoi says much about North Korea and its leader Kim Jong-un.

A flight to meetings in Vietnam’s capital with U.S. President Donald Trump on Wednesday and Thursday to address North Korea’s nuclear weapons program would have been easier of course. But years of international sanctions have left the country’s air fleet — like its economy — short on parts.

Besides, Kim is following a generations-old playbook written when his father and grandfather ruled, preferring old ways of doing things — in transportation and negotiation.

Indeed, the trip parallels this whole denuclearization process. Plodding and drawn out, it is being done on Kim’s terms — so far at least — preserving his nuclear arsenal and protecting his regime, much like the bulletproof train he uses for transportation.

Trump — who arrived Tuesday in Hanoi via Air Force One — may have declared there was “no longer a nuclear threat from North Korea” after last year’s talks with Kim in Singapore, but there’s plenty of disagreement on that front.

There is evidence the North’s weapons program has continued, despite Kim’s pledge to work toward denuclearization at the Singapore summit and Pyongyang’s widely publicized destruction of some testing facilities.

‘We fell in love’

Researchers at Stanford University estimate North Korea has increased its arsenal of nuclear weapons from 30 to up to 37 in the past year.

The Center for Strategic and International Studies, a U.S. think-tank, said it has identified 20 undeclared North Korean missile sites.

Commercially available satellite imagery suggests Pyongyang’s main nuclear reactor at Yongbyon may be churning out weapons-grade plutonium even as Trump and Kim talk this week. 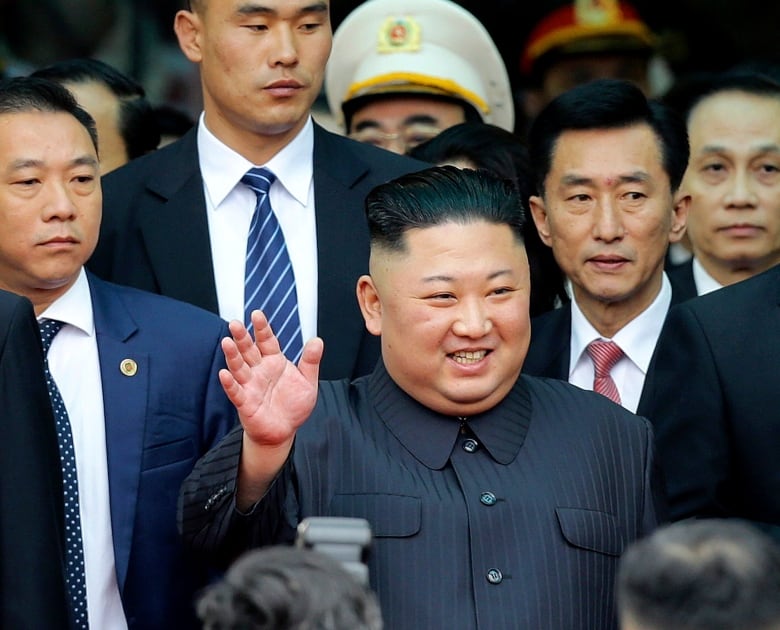 Kim waves upon arriving in Vietnam on Tuesday for a summit this week to discuss North Korea’s nuclear weapons program. (Minh Hoang/Associated Press)

It’s not surprising that even the U.S. administration’s main point of contact with Kim over the past year, Secretary of State Mike Pompeo, told CNN on Sunday the North remains a nuclear threat.

None of this seems to dissuade Trump, who is putting his faith in his own skills as a deal-maker, and in a budding bromance with “terrific” Kim.

“He wrote me beautiful letters, and they’re great letters,” Trump told supporters at a rally last fall. “We fell in love.”

Before leaving for Hanoi, Trump added, “We’ll see what that means, but he’s never had a relationship with anybody from this country and hasn’t had lots of relationships anywhere.”

It’s an improvement from threats of “fire and fury” hurled across the Pacific by Trump when North Korea was firing test missiles and vowing to “rain destruction” on the United States.

But what worries experts like Victor Cha is Trump is mistaking smiles and handshakes for progress in denuclearization, prompting the U.S. president to give up significant American assets for trinkets — perhaps offers to inspect facilities that are no longer used or needed by the North. 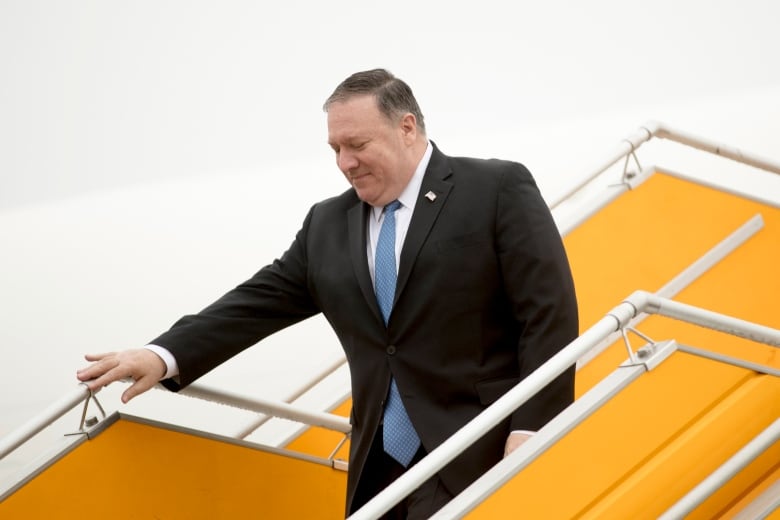 U.S. Secretary of State Mike Pompeo arrives at Noi Bai International Airport in Hanoi on Tuesday ahead of the summit. (Andrew Harnik/Associated Press)

At the Singapore summit, Trump surprised everyone by offering to halt long-standing joint military exercises between U.S. and South Korean forces for nothing more than promises to continue negotiations.

“The president’s unpredictability, his impulsiveness, his inclination not to prepare for meetings could get us into trouble,” said Cha, the former director for Asian affairs in the White House’s National Security Council and now a professor at Georgetown University.

So could the president’s complacency.

On Sunday, Trump said he’s “not in a rush” for an agreement with Kim that North Korea would get rid of its nuclear weapons. “I just don’t want testing,” he said. “As long as there’s no testing, we’re happy.”

“The North Koreans are experts at hair splitting and dragging things out for a long time,” said Kelly. “We’re now 14 months into this detente process which started in January 2018, and there’s not a whole lot to show for it.”

All the while, Pyongyang has continued building weapons, according to Stanford researchers.

The two sides still haven’t even agreed on the meaning of denuclearization, which Pompeo insists will be “real, demonstrable and verifiable,” but which most experts said is unlikely to lead to disarmament as in North Korea giving up its nuclear weapons capability.

And certainly not at this summit. So, what might be possible?

Kelly said the “most important” thing Trump could get from North Korea would be an inventory of exactly how many weapons it has. “If the North Koreans are serious about denuclearization, they have to tell us what they have and then we can start to bargain.” 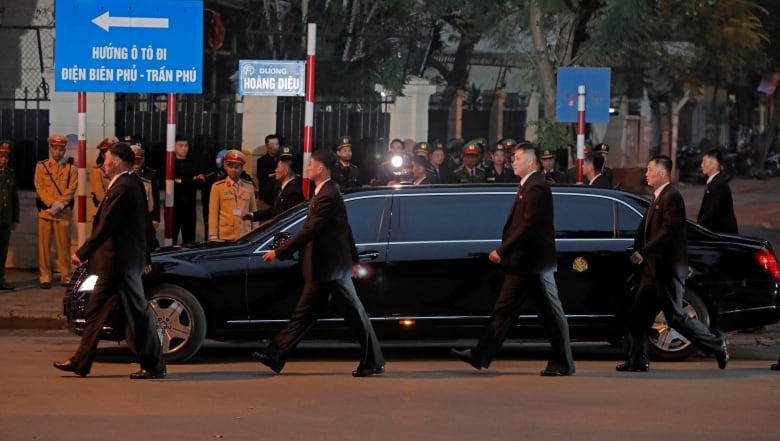 Anything less than that, Kelly said, and it will be clear Kim isn’t serious about negotiating and Trump is “just being taken for a ride.”

Trump’s answer is his campaign of “maximum pressure,” a set of strict sanctions imposed by the U.S. and the United Nations, will continue until there is a real deal.

The economic impact of these on North Korea denying it fuel and other essential supplies, and denying its leaders foreign luxury goods, probably did push Kim to negotiate, according to analysts. But there is growing evidence that sanctions enforcement has already eased, especially by China, North Korea’s biggest trading partner by far.

Meanwhile, U.S. allies in the region fear something even more dangerous than a summit that achieves nothing.

South Korea and Japan worry that in a bout of dealmaking, Trump will compromise their security for an agreement that saves the U.S. from the threat of North Korea’s  intercontinental ballistic nuclear missiles (ICBMs).

Cheon Seong Whun is a former secretary to South Korea’s National Security Council and now an analyst at the Asian Institute for Policy Studies, based in Seoul. His office lies less than 70 kilometres from the nearest North Korean weapons bases.

“What happens if North Korea agrees to cut back ICBMs while keeping an arsenal of nuclear warheads on short- and medium-range missiles pointed at us?” he asks.