Prime Minister Justin Trudeau arrived in Singapore on Tuesday afternoon primed to make his pitch to a Singapore business audience: Amid new barriers to trading with the U.S., why not consider Canada?

Trudeau has a busy three days planned at the margins of the Association of Southeast Asian Nations (ASEAN) and East Asia summits.

Canada isn’t a member of either group, but is lobbying for a seat at the latter to try to be more of a regional player on security issues. And it’s exploring a potential comprehensive trade agreement with the 10-country ASEAN bloc.

“We have an openness towards investment and to immigration that is extremely positive,” Trudeau said before meeting with the Canada–​ASEAN Business Council. “One of the things that is a big differentiator between us and our neighbour to the south right now is the fact that top companies can get visas for their top talent in certain sectors in less than two weeks, to be able to come and set up shop in Canada, and start doing great things with us.”

Trudeau said his visit comes as Canada is “particularly engaged in a positive way on the world stage.”

Last month, his government wrapped up consultations with Canada’s business community gauging the appetite for comprehensive trade talks with ASEAN. Trudeau expects to have more to say “in due course.”

However, an ASEAN deal could be a long-term slog. Instead, groups like the Chamber of Commerce want Canada to push ASEAN members like the Philippines to sign on to the deal already in place for the Pacific Rim: the CPTPP.

Canada and Singapore were among the first six countries to ratify the Comprehensive and Progressive Trans-Pacific Partnership, the 11-country deal reworked after the departure of the U.S. in 2017. It takes effect at the end of this year. 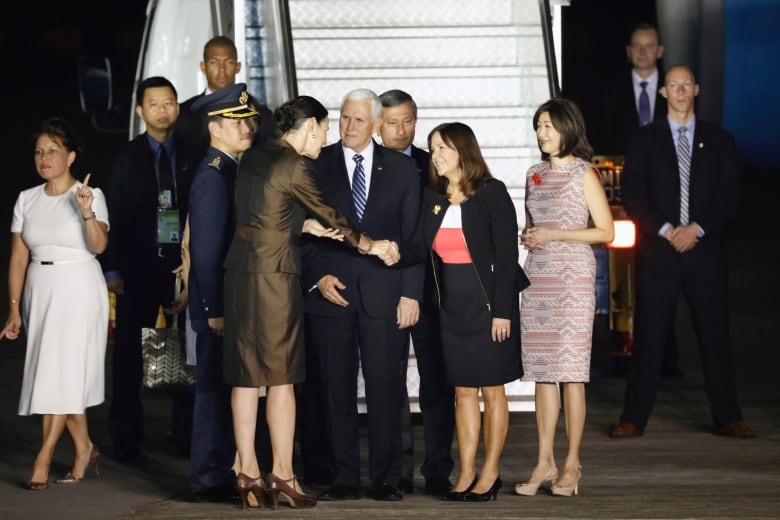 U.S. Vice-President Mike Pence and his wife Karen arrive at Paya Lebar Air base in Singapore on Tuesday. Pence is in Singapore to attend events around the 33rd ASEAN summit. (Bernat Armangue/Associated Press)

“We go through Singapore to the entire world because this is such an important trading hub,” Trudeau said. Singapore is the world’s largest transshipment hub, with goods passing through to somewhere else.

“The incomes in this part of the world have been rising dramatically,” said Wayne Farmer, volunteer president of the business council. “This is where the action is.”

“In some ways the NAFTA agreement has been almost too good for Canada because it really has shaped our trade and commerce flows,” Farmer said. “Now that things are a little bit different, I think it is a wake-up call that Canada needs to diversify.”

Trudeau said that with its existing agreements, Canada now has preferential market access to two-thirds of the world’s GDP, “and we are just getting started.”

“The real work, actually, gets started after you have signed the papers, and that is building the relationships … and also changing mindsets, getting Canadian companies to see the opportunities we have,” he said. Canada is “perhaps not top of mind” for potential investors.

This “real work” of relationship building may not have an immediate payoff this week — no major breakthrough announcements are expected — but Trudeau’s itinerary is packed. 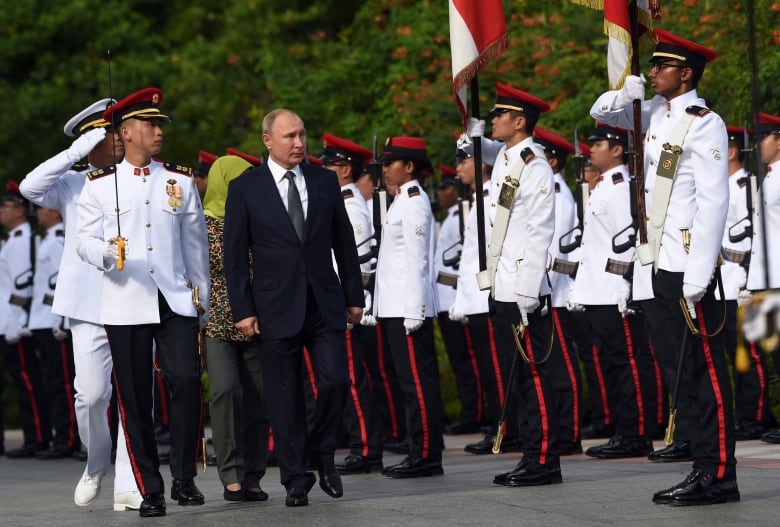 Russian President Vladimir Putin inspects the troops during a welcoming ceremony at the Istana presidential palace in Singapore on Tuesday. Putin’s visit coincides with the ASEAN and East Asia Summit talks this week. (Roslan Rahman/Pool Photo via Associated Press)

“These are relationship-driven markets. People appreciate the face time,” said Rohan Belliappa, president of the Canadian Chamber of Commerce in Singapore and a regional representative of the Canadian National Railway. “It goes a very long way because we have a prime minister that has a very strong brand equity globally.

“When he comes to Asia people want to hear from him. And that only boosts Canada’s reputation in the eyes of these very important business people.”

As a “dialogue partner” in ASEAN, Trudeau will rub shoulders with other leaders at least twice: at a working luncheon and a gala dinner on Wednesday.

But not all 10 of the ASEAN countries are a comfortable fit with the Trudeau government’s “progressive” agenda on human rights, freedom of the press and things like labour and environmental standards.

Canada has a long-running consular dispute over the apparently unwarranted imprisonment of a Canadian teacher in Indonesia.

Filipino President Rodrigo Duterte’s treatment of the media is precisely the opposite of the press freedom Trudeau was championing in Paris on Sunday afternoon.

And Canada recently stripped Myanmar’s Aung San Suu Kyi’s honorary citizenship in protest of her role in gross human rights violations against the Rohingya minority in that country.

In cases like these, Canada’s quest for a share of the economic growth in the region runs up against the values it’s been championing in other forums. 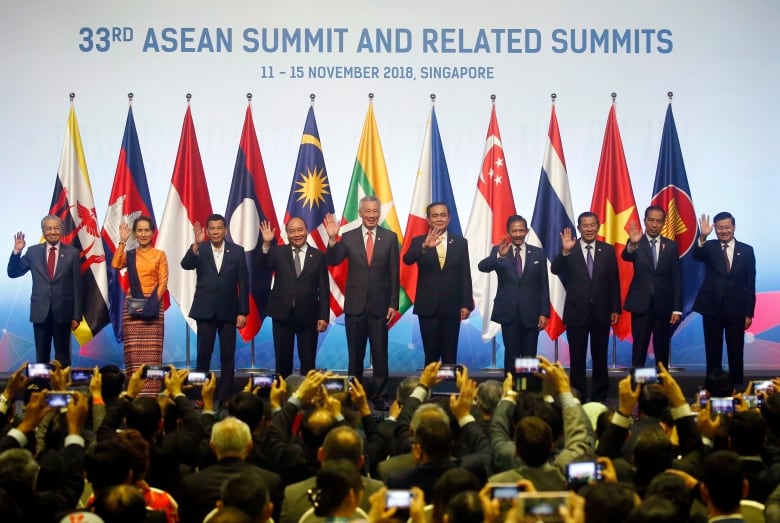 ASEAN Leaders pose for a group photo during the opening ceremony for their 33rd summit Tuesday in Singapore. (Bullit Marquez/Associated Press)

While ASEAN countries might be interested in a trade deal that cuts tariffs, it’s unclear they’re prepared to take other steps Canada may want to see before deepening trade relations.

Nevertheless, “it’s an advantage to stand up for your values,” said former foreign service officer Emilie Potvin, who now works for the Uber ride-sharing service in Southeast and North Asia. “Canada is seen clearly right now as a leader.” When it comes to rights, Trudeau is “willing to have that conversation” with everyone, she said.

The ASEAN summit is not known for airing its dirty laundry in public — with criticizing partners too harshly seen as a cultural affront.

But that may be changing: Malaysia’s prime minister recently suggested his country would no longer support Suu Kyi over her handling of the Rohingya crisis.

In a region where personal relationships count, Trudeau has a chapter in his family’s history that may help break the ice.

On Tuesday the prime minister said it was “touching” for him to return to Singapore, a place he had first visited as a young man with his father Pierre Trudeau. His mother Margaret’s side of the family has ancestral roots here: his fifth great-grandfather was Maj.-Gen. William Farquhar, the first British commandant of colonial Singapore early in the 19th century.

Farquhar’s daughter Esther, Trudeau’s direct ancestor, is buried in Singapore’s Fort Canning Park. A scheduled photo opportunity there was postponed due to a late flight Tuesday, but Trudeau hopes to reschedule.

Trudeau’s father’s relationship with China has helped open doors for Canada there since the Liberal government took office three years ago.

On Wednesday, Trudeau has his third leaders’ dialogue with Chinese Premier Li Keqiang, as Canada keeps trying to expand its presence in Asia’s largest market. 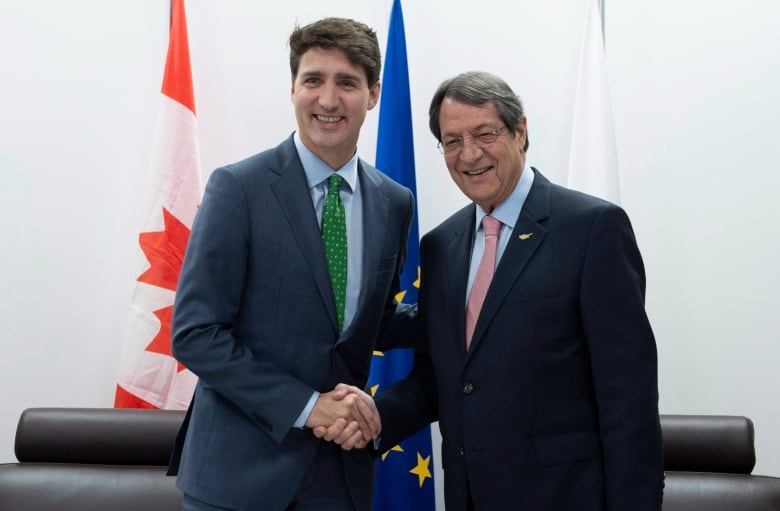 Trudeau’s trade diversification push even played a role in a short stopover his plane made on its way to Singapore.

When the president of Cyprus, Nicos Anastasiades, came to the airport for a short courtesy call, Trudeau reminded the European Union member that it would like to see a ratification vote in Cyprus soon on the Canada–EU trade deal.