As Christina Taft walks through the chalky rubble and blackened ash strewn on her property in Paradise, Calif., she winces as she tries to make sense of the destruction around her.

“This is just completely levelled,” she says.

“There is nothing here.”

In the corner of what was once her living room, yellow caution tape ropes off a rectangle on the ground. It looks as if someone was digging in the area, and right away Taft  knows why.

“This is where they must have found her.” 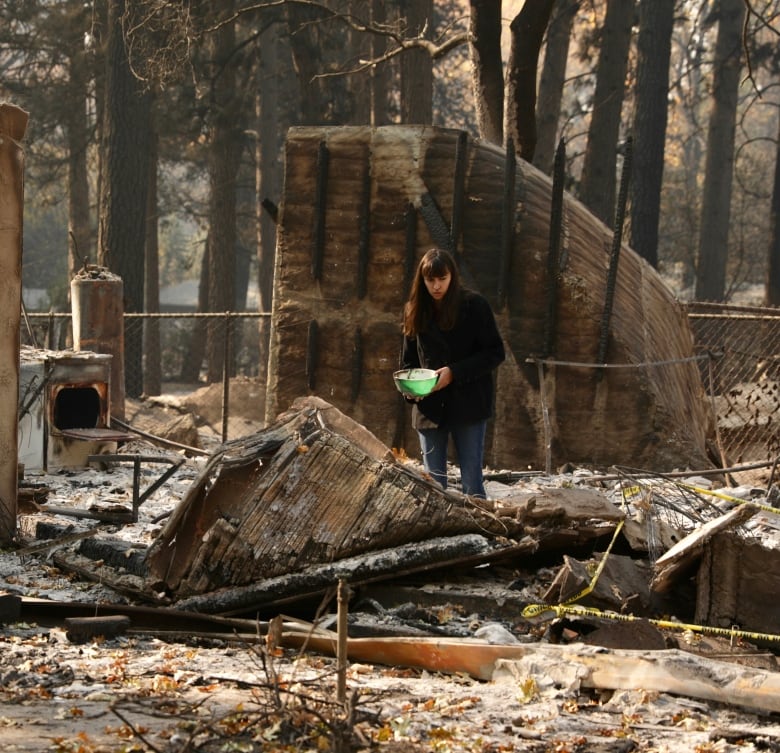 Christina Taft stands in the rubble of the duplex where she lived for seven years. (Chris Corday/CBC)

This is the first time the 25-year-old has returned since she fled her home nearly two weeks ago when the Camp Fire destroyed nearly 13,000 structures, leaving entire neighbourhoods in the northern California community of about 27,000 unrecognizable.

More than 80 people are confirmed to have died in the fire, but hundreds of others are still unaccounted for.

This spot in Paradise is the final place where Taft saw her mother, 66-year old Victoria Taft.

On the morning of Nov. 8, the neighbour with whom they shared their rental duplex knocked on their door, warning that a large fire burning to the east was spreading rapidly, and they should pack up and go.

Taft began loading the trunk of her car with photos, clothes and food, but her mother didn’t think there was any need to panic. 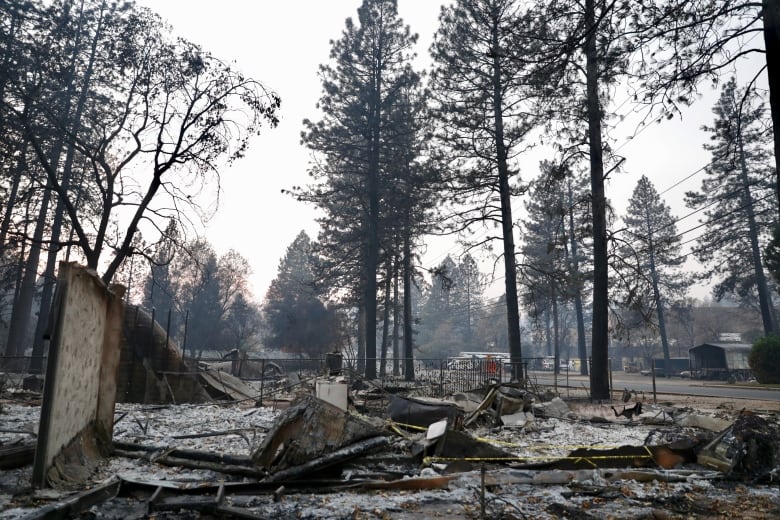 Searchers found the remains of Victoria Taft in the rubble of her home. (Chris Corday/CBC)

Christina Taft says her mother was partially blind and had been through wildfire evacuations before.

In 2008, when a fire threatened parts of Paradise, her home phone rang with an official emergency alert. First responders patrolled the streets honking horns and telling people to leave. None of that was happening this time.

But as the sky grew darker and ash started to rain down, Taft  grew frightened and pleaded with her mother to leave. When she refused, they began fighting, and in a panic, Christina Taft decided to go on her own.

She joined thousands of others in chaotic exodus out of Paradise. Traffic inched along, and a drive to the city of Chico, which should have taken just 30 minutes, took more than three hours. 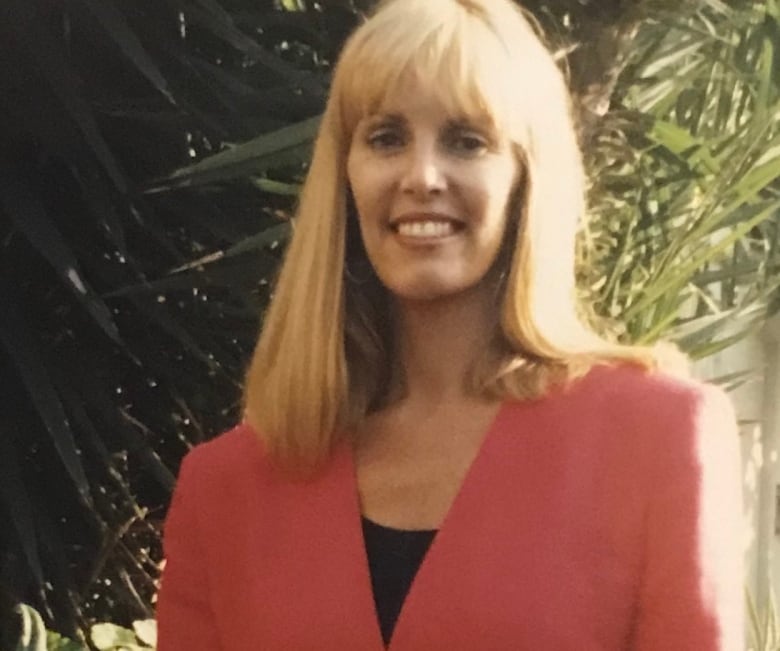 An undated photo of Victoria Taft, who was partially blind. (Submitted by Christina Taft)

On the way, she saw flames burning through part of Paradise and realized the grave danger her mother was in.

She desperately called 911 and urged crews to rescue her mother, but they were overwhelmed by calls and a fire already consuming the community and trapping residents.

Over the next three days Taft and a friend searched the evacuation centres for her mother and listed her as missing.

Then on Nov. 11, she received a call from the coroner’s office that her mother’s remains had been found.

“I left too early, too early,” she says, admitting she is consumed by guilt.

“I am partially responsible, because it is all on us.” 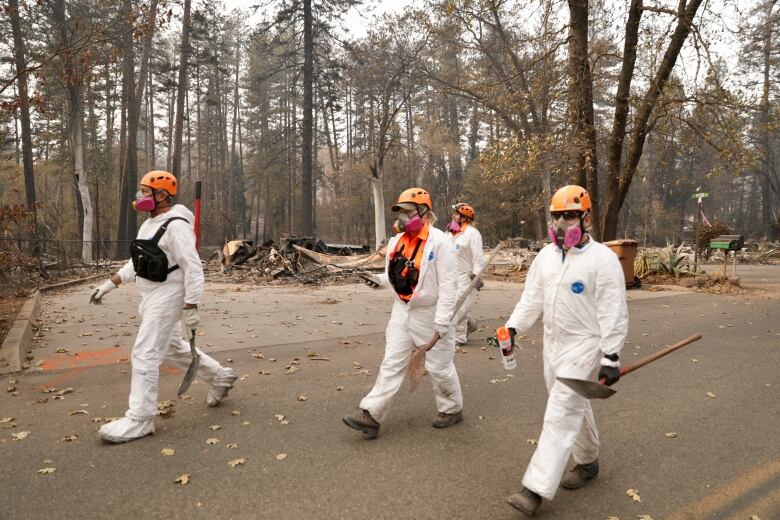 Hundreds of search and rescue personnel are in Paradise, going from lot to lot, looking for anyone who didn’t make it out. (Chris Corday/CBC)

A list of casualties published by the Butte County Sheriff’s Office shrinks and swells each day, depending on who is found and who is listed as missing.

The department admits the list is flawed. Some names are on there twice and others are misspelled, but Butte County Sheriff Kory Honea says it will take time to go through the backlog of calls and emails of desperate family members and  friends.

“We are clearing hundreds of hundreds of names, so I still support the decision to get the data out even if it wasn’t perfect,” Honea says.

All the properties in the community were quickly searched after the fire, and now crews are looking for anyone who might be buried, trapped under a wall or a ceiling that collapsed. 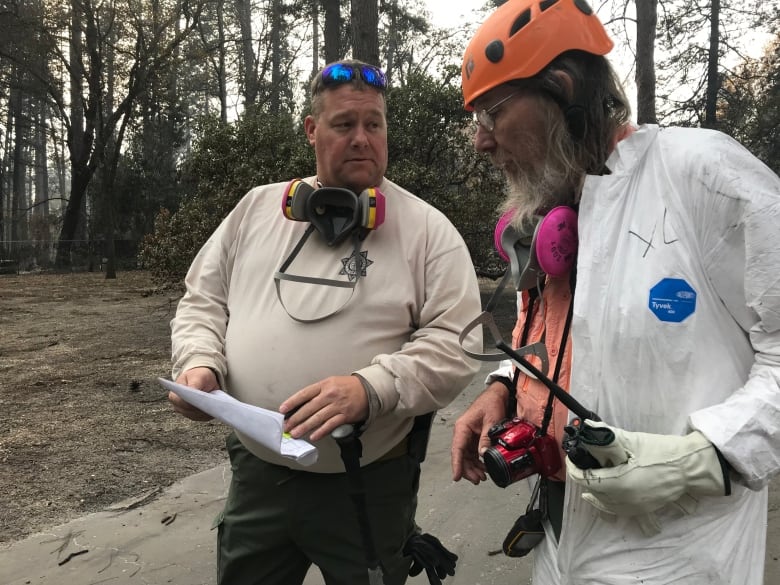 Hundreds of volunteer search and rescue teams from across the United States go lot by lot, picking through the rubble. Wearing respirators and hazmat suits, they focus on areas where people likely were, like bedrooms and living rooms.

Officials admit that some remains may never be found because the fire burned so hot that some bodies might have been incinerated.

This is the largest recovery mission ever in California, and forecast rain is complicating the effort. For crews that don’t typically conduct such grim searches, the experience has been a disturbing eyeopener.

“Normally we are looking for a missing  person out in the woods,” says Jason Denton, who is with a search and rescue team from Jackson County, Ore.

“We brought 12 volunteers down here, and they will all be changed when they get back.” 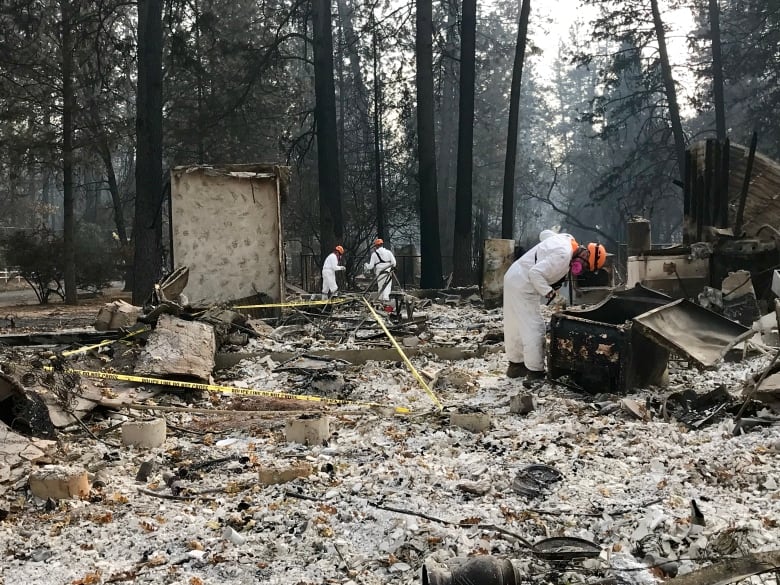 The search and rescue team takes a second look through what was Christina Taft’s home. (Briar Stewart/CBC)