No question, 2018 was a stunning and often frustrating year for everyone engaged in international trade.

Now, 2019 seems to be looking at all that conflict and disruption and saying, “Hold my eggnog.”

CBC News asked Canadian and American researchers, lecturers, lawyers and business advocates what they expect the new year to bring. Here’s some of what they told us.

NAFTA 2.0 ratification: Will they or won’t they?

The trade agreement that’s the most important for Canada’s economy is still the one that brings the greatest uncertainty, said Meredith Lilly, the Simon Reisman chair at the Norman Paterson School of International Affairs.

“Watch the congressional calendar” and President Donald Trump’s reaction to signs of foot-dragging on Congress’s part, she said. “There is no promise this is going to get ratified.”

There’s going to be panic in the media every time a congressman burps.– Carlo Dade, Canada West Foundation

Debra Steger, a former Canadian trade negotiator now at the University of Ottawa, is braced for “a rocky ride” in Congress, particularly now that the House of Representatives is controlled by Democrats.

“2019 might be the more important year [for NAFTA] in that respect, if it all goes up in smoke,” she said.

“The new NAFTA has a lot more hidden landmines than what people understand and believe,” said trade lawyer Cyndee Todgham Cherniak. “There will be disputes well into the future.”

The key issue, according to Brian Kingston of the Business Council of Canada, is what the Democrats want in exchange for their votes. “Are they asking for things that can actually be done in a relatively short period of time?”

Brown — arguably the party’s leading progressive populist on trade issues (inclined to skepticism on trade agreements, in other words) — could be a presidential candidate. Far from opposing protectionism, he may say Trump isn’t going far enough.

“Other presidential candidates won’t want to put a lot of light between themselves and him on trade policy,” Tucker said. 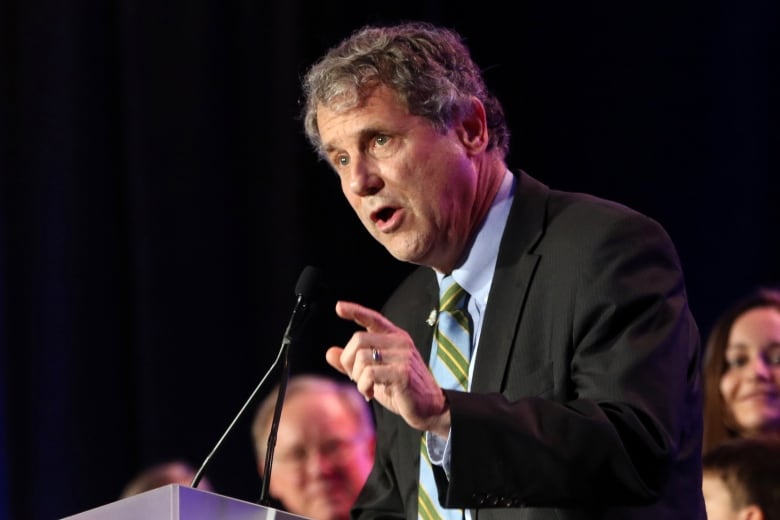 Senator Sherrod Brown from Ohio is expected to be an influential player in the Democratic presidential race. He might argue Donald Trump hasn’t been protectionist enough with his trade policies. (Aaron Josefczyk/Reuters)

“We tend to look at Congress as if it’s Parliament, where leaders command their flock,” said trade lawyer Mark Warner. That’s not how Washington works.

By Warner’s reckoning, about 20 Democrats need to join Republicans in voting for ratification. If enough are persuaded, it won’t matter if the Democratic leadership wants to send Trump a message by opposing it.

“Watch for signs as to whether (incoming House Speaker Nancy) Pelosi can keep Democrats together on trade,” he said.

The timeline for ratification in the spring could also be thrown off if Congress pursues Trump’s impeachment.

“I’m ever-hopeful the business community is going to get its act together, especially with a Democratic Congress, and use their leverage on them,” said Susan Aaronson from George Washington University.

Republican Party donors unhappy with current trade policies are starting to revolt too, she said.

“There’s going to be panic in the media every time a congressman burps,” said Carlo Dade of the Canada West Foundation.

There’s a lot of unresolved discontent out there over Trump’s trade policies (U.S. farmers didn’t get what they wanted on grain grading, for example), so expect cross-border trade skirmishes to continue.

The Trump administration’s steel and aluminum tariffs were supposed to be lifted once the new NAFTA was signed.

There are no signs of them going away soon.

“The U.S. doesn’t care if Canada is or is not a security threat,” Dade said; if the administration believes there aren’t enough Americans making steel and aluminum, they’ll say they have a security issue.

“There’s been a huge misreading” of the situation by Canadians, Dade said, abetted by people imploring Prime Minister Justin Trudeau to “fix the tariffs.”

“God help him, the only one who can restrain the president is the Senate, and they’ve shown no willingness to take the power back,” he said. 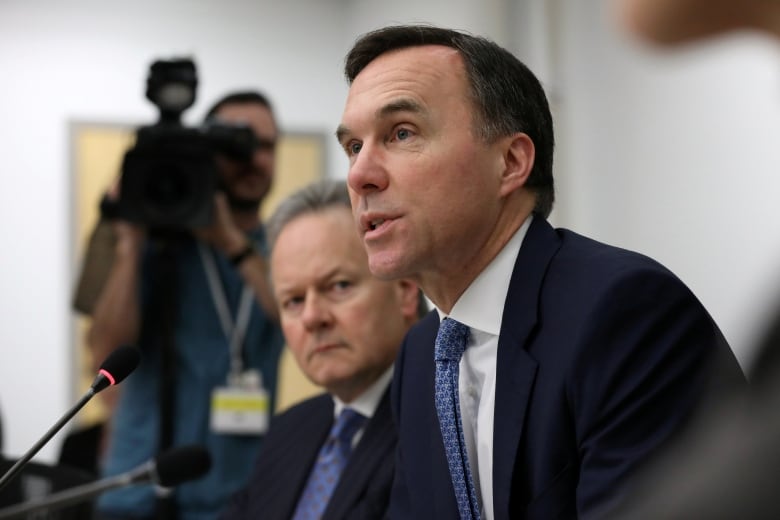 And there are still the ripple effects from the American tariffs to cope with, including Canada’s most recent steel safeguards.

In addition to being a “very big issue” for the manufacturing and construction sectors (their costs are up and they’re facing supply shortages), other countries may bring safeguard cases against Canada in response.

All this is happening as World Trade Organization panels prepare to hear arguments that both the initial U.S. tariffs and the retaliatory tariffs imposed by countries like Canada broke the rules.

But can the WTO sort this out? By the end of 2019, its appellate body won’t have enough judges to hear cases, thanks to U.S. objections.

Discussions on WTO reforms are underway; the upcoming World Economic Forum in Davos, Switzerland may see another meeting of a group of “like-minded” countries first convened in Ottawa last fall.

While the U.S. hasn’t withdrawn from the WTO, “there really doesn’t seem to be a willingness to engage in a real discussion,” said Inu Manak of the Cato Institute, a Washington-based libertarian think tank. “It really is challenging some of the fundamental, foundational aspects” of the WTO, she added.

Kingston said he doesn’t see an end to the WTO gridlock this year. “Things are going to get worse before they get better.”

Monica de Bolle of the Peterson Institute for International Economics said that, at first, she thought Trump’s trade confrontation with China was “going to be all bluster.”

“I thought it was a completely transactional thing that was going to go away,” she said.

While a recent Chinese promise to buy more American soybeans and other goods could mitigate the American trade deficit with China, the Trump administration wants more, including a rollback of key Chinese industrial development policies. 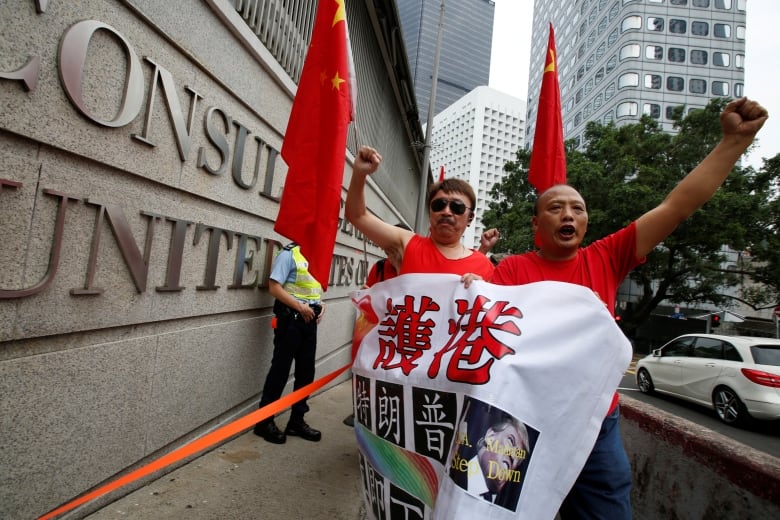 Pro-China protesters chant slogans against U.S. President Donald Trump outside the U.S. Consulate in Hong Kong last fall. Although both countries have agreed not to raise their tariffs further during the current 90-day truce, it’s unclear a resolution to their trade disputes is at hand. (Bobby Yip/Reuters)

Meanwhile, trade experts and the American public are embracing the idea “something needs to be done” to keep China from dominating economically, especially given recent cases of commercial espionage, de Bolle said.

It’s become a geopolitical problem, she said. “The fallout will pretty much define this period.”

“It encourages American companies to stay home,” she said, calling uncertainty one of Trump’s weapons. “We continue to marvel at what we think is a dumpster fire, but I think there is perhaps more intention behind it than we give credit.”

Brexit and everything after

Speaking of chaos … let’s consider what’s happening in the United Kingdom just weeks from now. It’s supposed to be leaving the European Union soon — but no one’s sure how.

“The U.K. is Canada’s third-largest export goods market and second-largest services export market,” said Mark Agnew of the Canadian Chamber of Commerce. Canadians should pay attention “in light of that deep commercial relationship.”

“I hope that changes in 2019 and we start to see some positive trade and investment as a result,” he said.

Early indications were that European Union exports were growing faster than Canada’s in the first year under the new deal. But Kingston said he thinks you can’t really evaluate an agreement until it’s been in place for about five years. 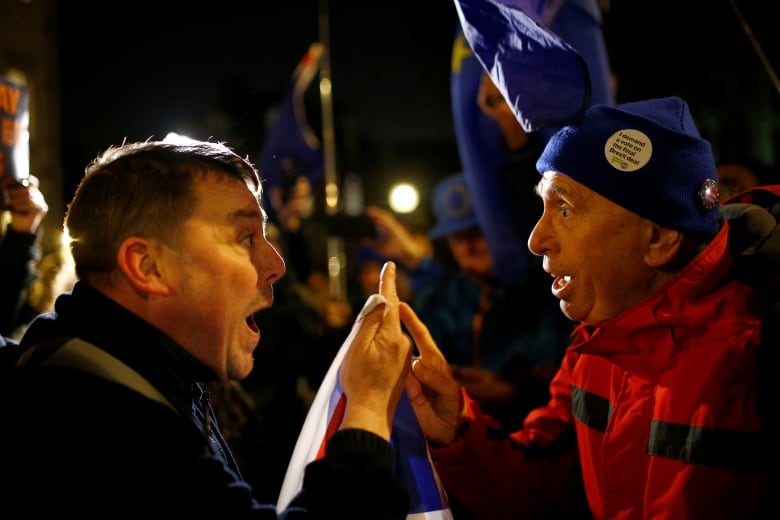 Pro-Brexit and anti-Brexit demonstrators faced off outside the British Houses of Parliament last month. Canada does a lot of trade with the U.K., but it’s unclear whether the favourable terms in the current Canada-EU trade deal will continue without interruption. (Henry Nicholls/Reuters)

Meanwhile, CETA’s future is not secure — something that discourages major investments.

In November, the U.K. became the 11th country to ratify CETA, even though future Brexit terms may or may not grandfather its measures.

Most of the remaining 17 EU countries, including major economies like France, Germany and Italy, have been slow to bring the deal to its final vote in their legislatures, as legal arguments continue over the EU’s jurisdiction.

“The deal is not yet finished,” said Lilly. “There’s a real risk moving forward that we could see the unravelling of CETA.”