The student who stared and smiled at an elderly Indigenous protester drumming in his face outside the Lincoln Memorial in Washington, D.C., as his schoolmates chanted and laughed says he did nothing to provoke the man in the videotaped confrontation and was only trying to calm the situation.

The student identified himself in an emailed statement Sunday evening as junior Nick Sandmann of Covington Catholic High School in a northern Kentucky suburb of Cincinnati. An official working with the family confirmed Sandmann’s identity, speaking on condition of anonymity because the source didn’t want to distract from the statement.

“I am being called every name in the book, including a racist, and I will not stand for this mob-like character assassination of my family’s name,” wrote Sandmann, who added that he and his parents have received death threats since video of what happened emerged.

Both Sandmann and Nathan Phillips say they were trying to defuse tensions that were rising among three groups on a day Washington hosted both the March for Life and the Indigenous Peoples March. But video of Sandmann standing close to Phillips, staring and at times smiling at him as Phillips sang and played a drum, gave many who watched it a different impression. Other students — many of them wearing “Make America Great Again” hats — appeared to be laughing at the drummer; and at least one could be seen on video doing a tomahawk chop.

Phillips said in an interview later that he had felt “fear, not for myself but for the next generations, fear of where this country’s going.”

The duelling accounts emerged Sunday as the nation picked apart footage from dozens of cellphones that recorded the incident amid an increasingly divided political climate fueled by a partial government shutdown over immigration policy.

Phillips had approached Sandmann, but well before that, both his group and Sandmann’s, which had taken part in the anti-abortion rally, were confronted by a third group that appeared to be affiliated with the Black Hebrew Israelite movement.

Videos show members of the religious group yelling disparaging and profane insults at the students, who taunt them in return. Video also shows Indigenous people being insulted by the small religious group.

See one video of the Friday protest, which was recorded by many people.

Sandmann wrote that the students were called “racists,” “bigots,” “white crackers” and “incest kids” by the third group. He said a teacher chaperone gave the students permission to begin their school chants “to counter the hateful things that were being shouted at our group.”

One of those chants, however, is what led Phillips and Marcus Frejo, a member of the Pawnee and Seminole tribes, to approach the youths.

It was a haka — a war dance of New Zealand’s Indigenous Maori culture, made famous by the country’s national rugby team. Frejo, who is also known as Chief Quese Imc, told the AP in a phone interview that he felt the students were mocking the dance.

Phillips, an activist described by the Indian Country Today website as an Omaha elder and Vietnam War veteran, said in an interview with The Associated Press that he was trying to keep peace between the high school students and the religious group.

He said he heard people chanting “Build that wall” or yelling, “Go back to the reservation.” At one point, he said, he sought to ascend to the Lincoln statue and “pray for our country.” Some students backed off, but one student wouldn’t let him move, he added.

“They were making remarks to each other … [such as] ‘In my state those Indians are nothing but a bunch of drunks.’ How do I report that?” Phillips said. “These young people were just roughshodding through our space, like what’s been going on for 500 years here — just walking through our territories, feeling like ‘this is ours.”‘

Sandmann said he heard no student chant anything beyond school spirit chants, and that he hadn’t even been aware of the Indigenous group until Phillips approached him.

“The protester everyone has seen in the video began playing his drum as he waded into the crowd, which parted for him. I did not see anyone try to block his path,” Sandmann wrote. “He locked eyes with me and approached me, coming within inches of my face. He played his drum the entire time he was in my face.”

Trying to ‘defuse’ the situation

Sandmann said one of the Indigenous protesters yelled at them that they “stole our land” and they should “go back to Europe,” but that he never spoke to or interacted with Phillips. “To be honest, I was startled and confused as to why he had approached me.”

He wrote that he “believed that by remaining motionless and calm, I was helping defuse the situation.” 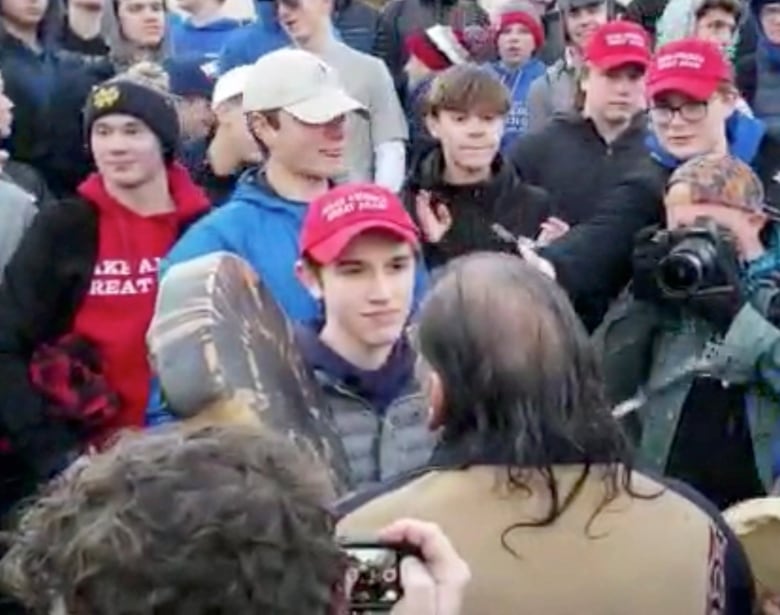 “I said a silent prayer that the situation would not get out of hand,” he wrote. He said the incident ended when the buses arrived and his teacher told him it was time to leave.

Though many commenting on the internet were taken aback by Sandmann staring at Philipps, the teen said he was “not intentionally making faces at the protester. I did smile at one point because I wanted him to know that I was not going to become angry, intimidated or be provoked into a larger confrontation.” He said he had never encountered any kind of public protest before.

The Roman Catholic Diocese of Covington apologized for the incident on Saturday, saying “this behaviour is opposed to the Church’s teachings on the dignity and respect of the human person.” They promised to take “appropriate action, up to and including expulsion.”

Sandmann said he has provided a copy of his statement to the diocese and said: “I stand ready and willing to co-operate with any investigation they are conducting.”

A spokesperson for the diocese did not return an email Sunday night.

Covington Catholic High School, in the northern Kentucky city of Park Hills, was quiet Sunday as the area remained snow-covered. The all-male school, which has more than 580 students, appeared deserted with an empty police car parked in front of the building.

Chase Iron Eyes, an Indigenous activist from North Dakota who was at the Lincoln Memorial as the confrontation unfolded, said he blames the divisive language of U.S. President Donald Trump for what happened.

“In our country right now, in the United States, there is a racially charged atmosphere, ” he said. “Any objective, reasonable mind is going to be able to interpret that he’s giving licence to some of this behaviour.”

Nikki Sanchez, an Indigenous activist from B.C. who was a featured speaker at Friday’s march, said she believes that video of the incident shows there’s still a lot of work to be done when comes to attitudes toward Indigenous people.