The number of Canadians living below the poverty line has never been lower, new numbers from Statistics Canada suggest.

The data agency released its Canadian Income Survey for 2017 on Tuesday, a tally of how Canadians from different demographic groups were doing that year compared to how they were doing in previous years.

Overall, the median income, after taxes, for Canadian families rose by 3.3 per cent to $59,800. That figure comes on the heels of two years of flat growth.

While a rising tide seems to be raising all boats, that’s not to suggest that some people still aren’t dipping below the surface. In 2017, 3.4 million Canadians, or 9.5 per cent of the population, lived below the poverty line, down slightly from 10.6 per cent the previous year.

By the MBM’s math, the government considers someone as being below the official poverty line when they are unable to pay for a  specific basket of goods and services in their community — things such as healthy food, appropriate shelter and home maintenance, clothing and transportation, and access to other services and activities that allow them to engage in their community. 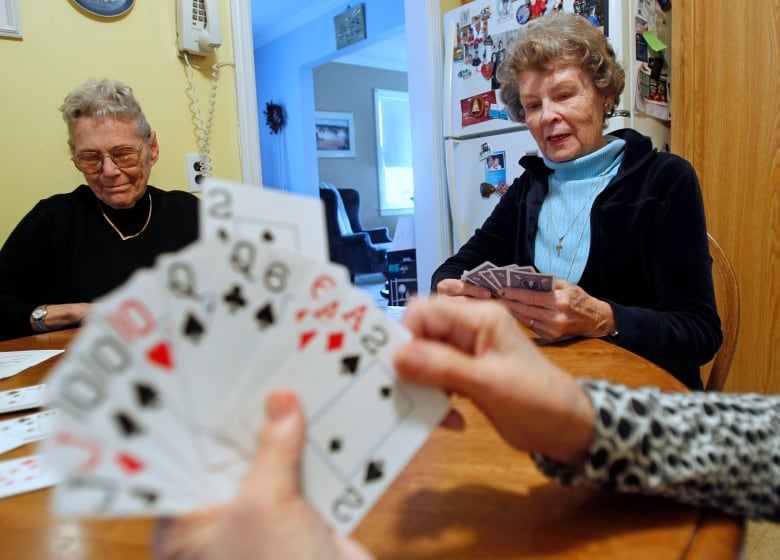 Fewer Canadian seniors were living below the poverty line in 2017 than there were in 2016, but over a longer timeframe the number has inched higher. (Rich Schultz/ Associated Press)

The data agency noted that 2017 was the first full year in which Ottawa distributed the Canada Child Benefit, a government program that allows any family with a child to receive up to $6,400 per child under the age of six, and $5,400 per child aged six through 17. The CCB replaced previous child-focused government programs including the Canada Child Tax Benefit, the Universal Child Care Benefit and income splitting.

An analysis by government watchdog the Parliamentary Budget Officer in 2016 noted that while a boost in income was to be expected in the short term, since the CCB is not indexed its impact is expected to come down over time to the same level that the programs it replaced would have had.

Think-tank The Fraser Institute, which promotes free market solutions in policy discussions, has also criticized the CCB for being a program that “fosters dependence on government,” and  “not a policy that rewards hard work by allowing Canadians to keep more of what they earn.”

Other demographic groups are, in the aggregate, also rising out of poverty, but not as quickly as children are.

There was little change among the other provinces, the data agency said.