Authorities called in a mobile DNA lab and anthropologists to help identify the dead as the search went on for victims of the most destructive wildfire in California history.

The overall death toll from the outbreak of fires at both ends of the state stood at 25 on Sunday and appeared likely to rise.

The worst of the blazes was in northern California, where flames reduced the town of Paradise, population 27,000, to a smoking ruin days ago and continued to rage in surrounding communities.

The number of people killed in that fire alone — at least 23 — made it the third-deadliest on record in the state. As forensic teams combed through what little remained of Paradise on Sunday, a parking lot became a staging area for hearses.

Butte County Sheriff Kory Honea said the county was bringing in more rescue workers and consulted anthropologists from California State University at Chico because in some cases “the only remains we are able to find are bones or bone fragments.”

“This weighs heavy on all of us,” Honea said.

More than 110 unaccounted for

Authorities were also bringing in a DNA lab and encouraged people with missing relatives to submit samples to aid in identifying the dead after the blaze — called the Camp Fire — destroyed more than 6,700 buildings, nearly all of them homes.

The sheriff’s department compiled a list of 110 people unaccounted for, but officials held out hope that many were safe but had no cellphones or other way to contact loved ones.

Firefighters gained modest ground overnight against the Camp Fire, which grew slightly to 440 square kilometres from the day before but was 25 per cent contained, according to state fire agency, Cal Fire. 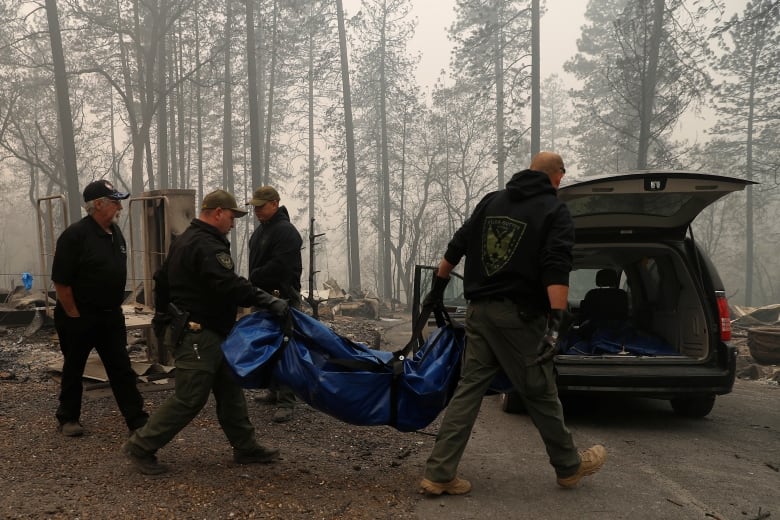 Two people were also found dead in a wildfire in Southern California, where flames tore through Malibu mansions and working-class Los Angeles suburbs alike. The severely burned bodies were discovered in a long residential driveway in celebrity-studded Malibu, where those forced out of homes included Lady Gaga, Kim Kardashian West, Guillermo del Toro and Martin Sheen.

Dana Baker, a Canadian who lives and works in Thousand Oaks, told CBC News her community is having trouble coping with the fires so soon after the shooting.

“I am tired. Between not sleeping well, trying to check on everybody, you know, to make sure they’re OK after two tragedies. No one is okay,” she said. “I can hear sirens right now. We’re all just on edge.”

Fire officials said Sunday morning that the Woolsey Fire, the larger of the region’s two fires and the one burning in and around Malibu, grew to 337 square kilometres and was 10 per cent contained.

But the strong, dry Santa Ana winds that blow from the interior toward the coast returned after a one-day lull, fanning the flames.

The number of structures destroyed by both Southern California fires climbed to nearly 180, authorities said. Looting was also reported in area affected by the southern fires and arrests were made, police reported. 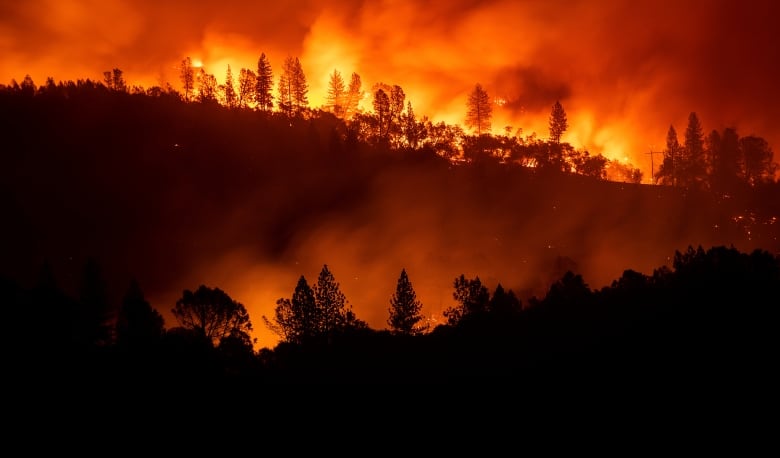 The Camp Fire burns along the top of a ridge near Big Bend, Calif., on Saturday. Crews working to contain the blaze overnight faced deteriorating weather conditions as winds picked up and humidity dropped. (Noah Berger/Associated Press)

All told, 300,000 people were under evacuation orders up and down the state.

Gov. Jerry Brown said he is requesting a major-disaster declaration from U.S. President Donald Trump that would make victims eligible for crisis counselling, housing and unemployment help, and legal aid.

Drought, warmer weather attributed to climate change and the building of homes deeper into forests have led to longer and more destructive wildfire seasons in California.

Tearful residents react after deadly fires rip through their neighbourhoods:

California residents react to deadly fires that swept in and destroyed homes. 1:01

On Sunday, Ventura County Fire Chief Mark Lorenzen warned the California was “entering a new normal” and that fires in the state grew far more quickly in 2018 than they did even 10 years ago.

“The rate of spread is exponentially more than it used to be,” Lorenzen said.

While California officially emerged from a five-year drought last year, much of the northern two-thirds of the state is abnormally dry. 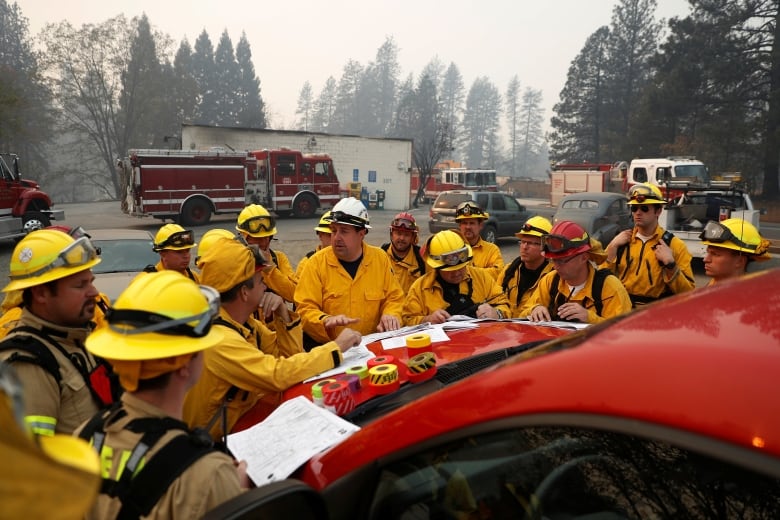 Firefighters gather for a morning briefing in Paradise on Saturday. (Stephen Lam/Reuters)

In Paradise, a town founded in the 1800s, residents who stayed behind to try to save their properties or who managed to return despite an evacuation order found incinerated cars and homes.

Wearing masks because the air was still heavy with smoke, people sidestepped metal that had melted off of cars or Jet-Skis as they surveyed their ravaged neighbourhoods. Some cried when they saw nothing was left.

Jan McGregor, 81, got back to his small two-bedroom home in Paradise with the help of his firefighter grandson. He found his home levelled — a large metal safe and pipes from his septic system the only recognizable traces. The safe was punctured with bullet holes from guns inside that went off in the scorching heat.

“We knew Paradise was a prime target for forest fire over the years,” he said. “We’ve had ’em come right up to the city limits — oh, yeah — but nothing like this.”

McGregor said he probably won’t rebuild: “I have nothing here to go back to.” 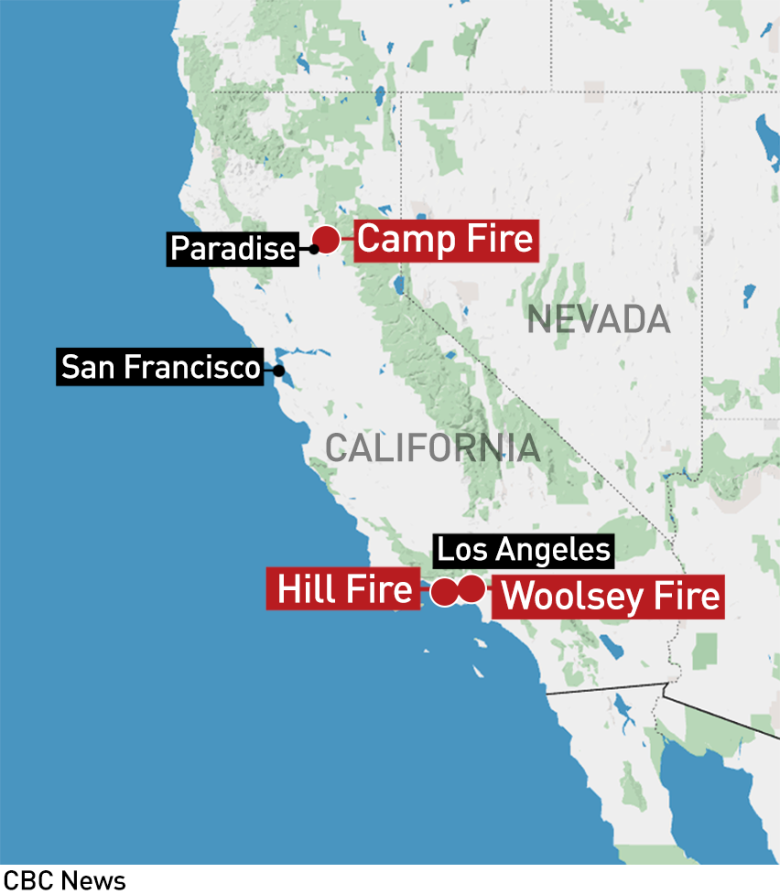