Saskatchewan has become the first Canadian province to introduce legislation allowing police to warn partners of someone’s violent or abusive past.

The purpose of the law is to inform people who may not know they are in an intimate relationship with someone who has a history of violence.

If passed, the law would allow police forces to disclose a person’s criminal history to that person’s partner in some cases.

A panel would review potential cases to decide whether the risk is great enough to merit disclosing a person’s past, according to a government spokesperson. The specifics of who is on that panel and what guidelines they would use to determine the severity of that risk have not yet been established.

The legislation allows for applications from the police, the person at risk, family members, medical professionals and shelter workers, among others. Even in cases where someone else makes the application, only the partner would be provided the criminal history.

“We have seen too many cases of interpersonal, domestic and sexual violence in our province,” Justice Minister Don Morgan said in a statement.

“If we are able to identify risk and inform those at risk, we hope to help protect people in Saskatchewan from violent and abusive behaviour by a partner.”

Morgan said the legislation is intact but Saskatchewan police forces and the ministry of justice are working on finalizing the disclosure protocol.

“Clare’s Law” originated in the United Kingdom and is named for Clare Wood. In 2009, Wood was murdered by her ex-boyfriend in the Greater Manchester area.

The 36-year-old met George Appleton online,, and they dated for about 15 months.

Wood’s father pushed the British government to change laws to allow police to disclose a person’s criminal history to their current or former partner if police feel it is necessary.

Wood’s family found out after her death that Appleton had spent six years in prison for holding a woman at knife-point for 12 hours.

If “Clare’s Law” had existed, police would have notified Wood about Appleton’s criminal history. 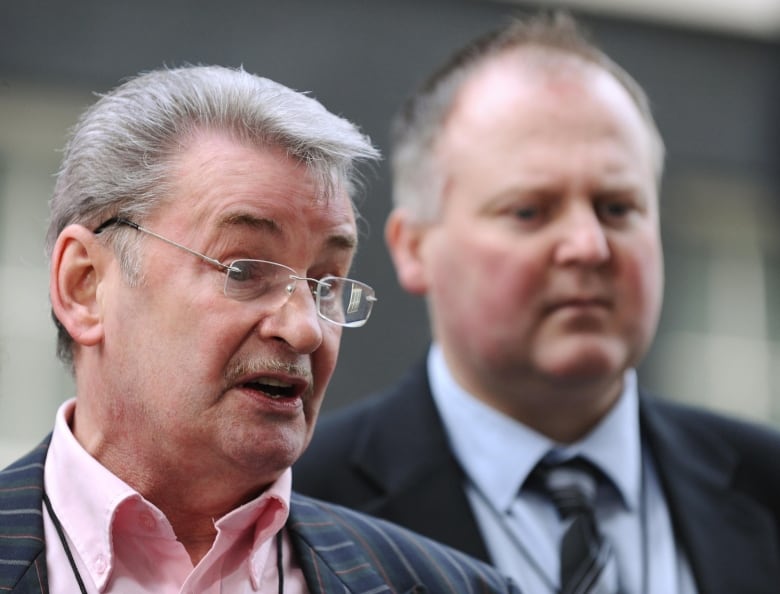 Michael Brown, the father of murdered Clare Wood (left) and Clare’s brother Adam Brown-Wilkinson speak to the media after handing in a petition at 10 Downing Street in London, calling for a law change giving women the right to know if their partner has a history of domestic abuse. (Dominic Lipinski/PA Images/Getty Images)

In May, the province released its long-awaited Domestic Violence Death Review.

The report took an in-depth look at six cases of domestic homicide from 2005 to 2014 and made 19 broad-based recommendations in the areas of education, assessment and intervention.

One of the recommendations is “develop a first responder team in all communities across the province with expertise in domestic violence.”

Jo-Anne Dusel was part of the review panel and she supports the introduction of Clare’s Law.

“I think that very broad education is needed for children and adults on what this type of violence actually looks at, so we know it and can take steps to prevent it from happening,” she said.

“I think it’s quite common for this sort of violence to be normalized.”

Dusel who works on the front lines as the executive director of the Provincial Association of Transition Houses and Services of Saskatchewan, or PATHS.

Dusel says right now she is emailing with a woman in Saskatchewan who is leaving an abuse relationship. She said when she mentioned Clare’s Law to the woman, the woman told her 12 people came forward and told her things she should have known after the relationship ended.

“(Clare’s Law) can be helpful as long as people in the community are ready to be more than a bystander and actually warn those that may be getting into relationships with known abusers,” Dusel said.

Saskatchewan has the highest rate of domestic violence among all Canadian provinces.

Saskatchewan had 5,976 cases of intimate partner violence reported to police in 2015. The provincial rate of 666 cases per 100,000 people was highest in the nation. Ontario had the lowest rate at 226 per 100,000, according to Statistics Canada.

In 2015, Lisa Strang, the party’s longest serving employee and its finance director, was shot twice from behind by her husband. John Strang pleaded guilty to second degree murder and was sentenced to life in prison with no parole for 17 years.

“For everybody in our party, we are aware and particularly sensitive to [domestic violence],” Morgan said.

The government’s Status of Women office hired a director to oversee the implementation of the domestic violence death review recommendations. The government provided an update on the status of what has been done since May.

In this budget year, the province is spending more than $20 million in funding for prevention and intervention services, including funding domestic violence transition houses, sexual assault centres, and family outreach services.