Ukraine’s president demanded Monday that Russia immediately release Ukrainian sailors and ships seized in a standoff around Crimea that sharply escalated tensions between the two countries and drew international concern.

The two neighbours have been locked in a tense tug-of-war since Russia’s 2014 annexation of Crimea, but the incident late Sunday in which Russian coast guard ships fired on Ukrainian navy vessels near the Kerch Strait directly pitted the two militaries, placing them on the verge of an open conflict.

The Ukrainian navy said six of its seamen were wounded when the Russian coast guard opened fire on three Ukrainian ships near the Kerch Strait and then seized them. Russia said three Ukrainian sailors were slightly injured and given medical assistance. 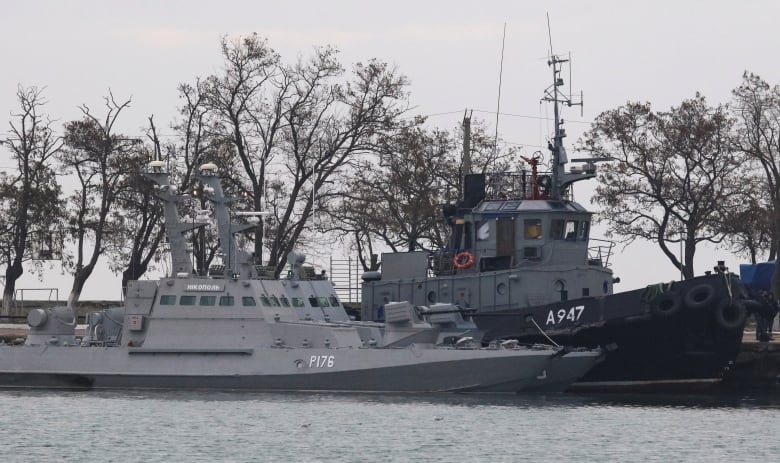 The seized Ukrainian ships anchored in a port of Kerch. (Pavel Rebrov/Reuters)

Ukraine’s President Petro Poroshenko chaired an emergency meeting of his cabinet early Monday and asked parliament to introduce martial law in response to what he described as Russian aggression.

“We consider it as an act of aggression against our state and a very serious threat,” the president said. “Unfortunately, there are no ‘red lines’ for the Russian Federation.”

If adopted by lawmakers, the emergency measures proposed by Poroshenko will include a partial mobilization and strengthening the country’s air defence. They also include a plethora of vaguely worded steps such as the “strengthening” of anti-terrorism measures and “information security.”

The fate of the Ukrainian seamen was not immediately clear. Klimkin insisted they should be treated as prisoners of war, while Kremlin spokesperson Dmitry Peskov did not say what legal status they have.

An emergency meeting of the United Nations Security Council was also called for Monday. The European Union and NATO called for restraint from both sides.

Poroshenko had a phone call Monday with NATO Secretary General Jens Stoltenberg to discuss the situation. NATO later said that at Poroshenko’s request, its ambassadors and Ukraine’s envoy will hold emergency talks in Brussels later Monday. 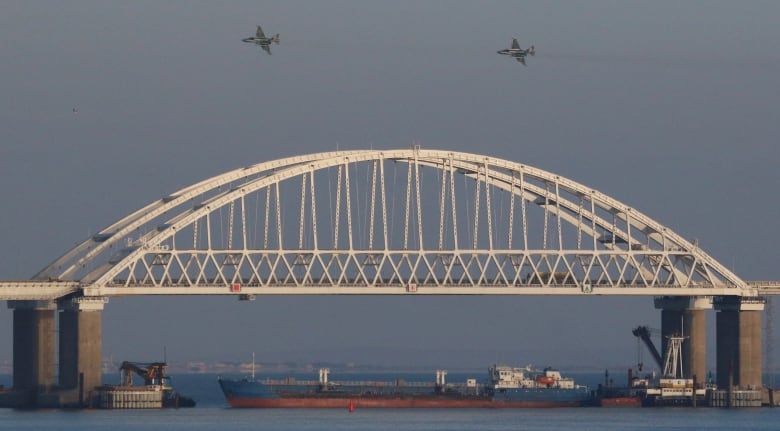 Russian fighter jets fly over a bridge connecting the Russian mainland with the Crimean Peninsula, after three Ukrainian navy vessels were stopped by Russia from entering the Sea of Azov via the Kerch Strait in the Black Sea on Sunday. (Pavel Rebrov/Reuters)

Poroshenko had a phone call Monday with NATO Secretary General Jens Stoltenberg to discuss the situation. NATO later said that at Poroshenko’s request, its ambassadors and Ukraine’s envoy will hold emergency talks in Brussels later Monday.

Poroshenko said at a meeting of Ukraine’s national security council Monday that “we demand that [the ships and crews] are urgently turned over to the Ukrainian side” and called for a “de-escalation” of the crisis around Crimea.

Russia and Ukraine have traded blame over the incident that further escalated tensions that have soared since Russia annexed Ukraine’s Crimean Peninsula in 2014 and backed a separatist insurgency in Eastern Ukraine.

Ukraine said its vessels were heading to the Sea of Azov in line with international maritime rules, while Russia charged that they had failed to obtain permission to pass through the Kerch Strait separating Crimea from the Russian mainland.

The narrow strait is the only passage between the Black Sea and the Sea of Azov. It’s spanned by a 19-kilometre bridge that Russia completed this year. While a 2003 treaty designates the Kerch Strait and Sea of Azov as shared territorial waters, Russia has sought to assert greater control over the passage since the annexation of Crimea.

“There is no doubt that it was done by blessing or, perhaps, even a direct order from the top,” said Russian Foreign Minister Sergey Lavrov. “While planning that provocation, Ukraine had undoubtedly hoped to get additional benefits from the situation, expecting the U.S. and Europe to blindly take the provocateurs’ side.”

He urged the West to “calm down those in Ukraine who are trying to unleash a military hysteria to get political gains in connection with the planned elections” — a reference to Ukraine’s presidential vote in March.

A motion to introduce martial law requires a simple majority of votes in the 450-seat parliament, which Poroshenko’s party controls. He initially proposed that the measure would last 60 days, which would derail the presidential election campaign that’s due to start on Dec. 30, with the vote in March.

However, Poroshenko later reduced the proposal to 30 days, meaning that marshal law would in theory be lifted right before the election campaign gets underway.

“I fulfilled my constitutional duty and a few hours ago, by my decree, I imposed martial law throughout Ukraine from 9 a.m. on Nov. 28,” he said.

Some lawmakers lashed out at Poroshenko’s move as an attempt to influence the vote. Polls show Poroshenko trailing far behind arch-rival Yulia Tymoshenko.

“Martial law in Ukraine would present a wonderful chance to manipulate the presidential elections,” said Oksana Syroid, a deputy speaker of parliament who is a member of the Samopomich faction.

She noted that martial law was not introduced in 2014 or 2015 despite large-scale fighting between Ukrainian forces and Russia-backed separatists in the east.

“We believe that it’s wrong and dangerous to solve electoral tasks by waving a flag of war.”

Meanwhile, hundreds of protesters from far-right party National Corps waved flares at a protest in the snowy streets outside the Ukrainian parliament Monday. They brandished yellow-and-blue flags with the Ukrainian national symbol, the trident, and a huge white banner reading “Don’t back down!”