People rang in the new year as the clock struck midnight in major cities such as Tokyo and Seoul, London, Paris, New York and Toronto.

The Pacific island country of Kiribati was the first in the world to welcome the new year, greeting 2019 with muted celebrations after spending 2018 on the front line of the battle against climate change. Much of the country’s land mass, occupied by 110,000 people, is endangered by rising seas which have inundated coastal villages.

Crowds in Auckland, New Zealand, were also among the first to usher in 2019. Tens of thousands gathered around Sky Tower as fireworks exploded from the top of the 328-metre structure. Across the country, thousands took to beaches and streets. 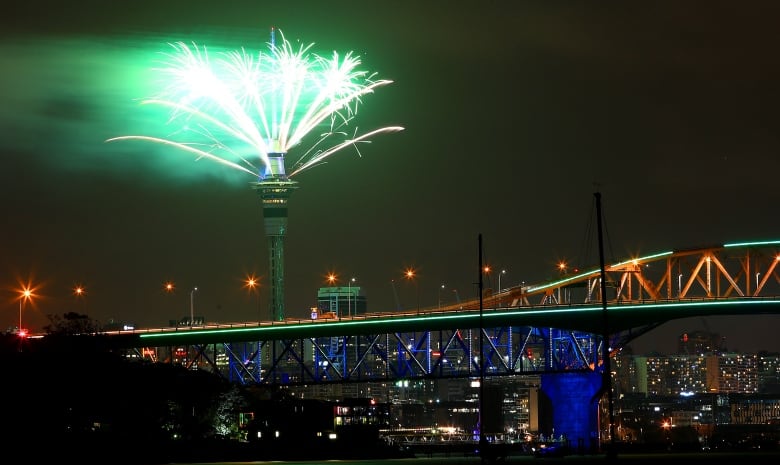 In Taipei, Taiwan, onlookers were treated to a fireworks display centred on the city’s tallest skyscraper. In Hong Kong, thousands of people gathered along the shore to take in a show in the skies over the city’s iconic Victoria Harbour. 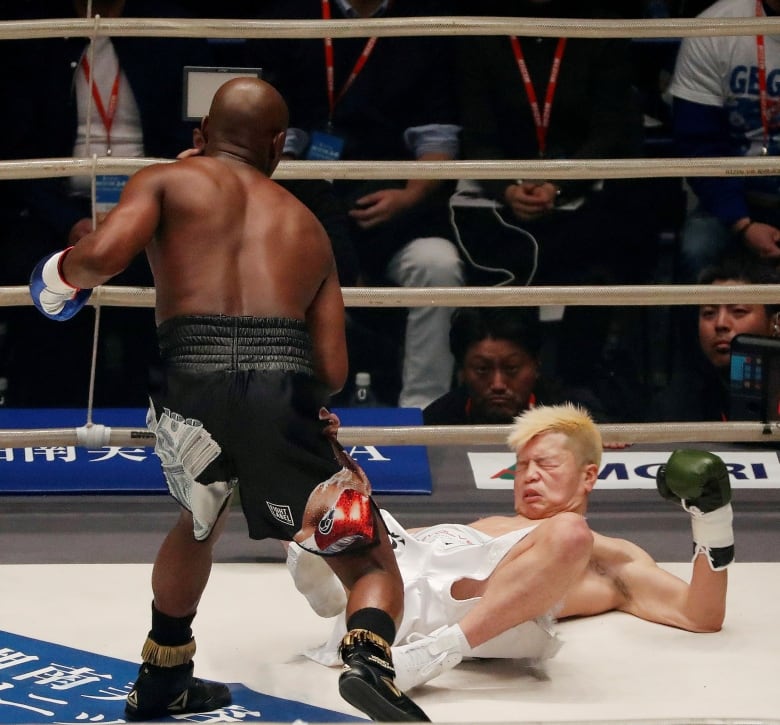 Floyd Mayweather knocks down Tenshin Nasukawa in the first round of a New Year’s Eve match in Japan. (Issei Kato /Reuters)

American boxer Floyd Mayweather soundly defeated Japanese kickboxer Tenshin Nasukawa in the first round of what was billed as three rounds of entertainment with no official record, meaning both fighters retain their undefeated tallies.

While many in Thailand celebrate New Year’s Eve with fireworks, hundreds of Thais travelled to Takien Temple in a suburb of Bangkok to lie inside coffins for traditional funeral rituals.

Participants believe the ceremony — symbolizing death and rebirth — helps rid them of bad luck and allows them to be born again for a fresh start in the new year.

Thailand welcomes the new year with a spectacular fireworks display over the Chao Praya river 0:43

As Russians raised toasts to celebrate across the country’s 11 time zones, President Vladimir Putin stressed the need to rely on internal resources to improve living standards.

In a televised address just before midnight, Putin said “we can achieve positive results only through our own efforts and well-co-ordinated teamwork.”

The country’s festive mood was marred by the deadly collapse Monday of part of an apartment building in Magnitogorsk.

In Paris, police set up a security perimeter in the area of the Arc de Triomphe, with bag searches, a ban on alcohol and traffic restrictions. The Interior Ministry said Sunday that the heavy security measures were needed because of a “high terrorist threat” and concerns about “non-declared protests.”

Anti-government protesters from the yellow vest movement had issued calls on social media for “festive” demonstrations on the famous avenue. 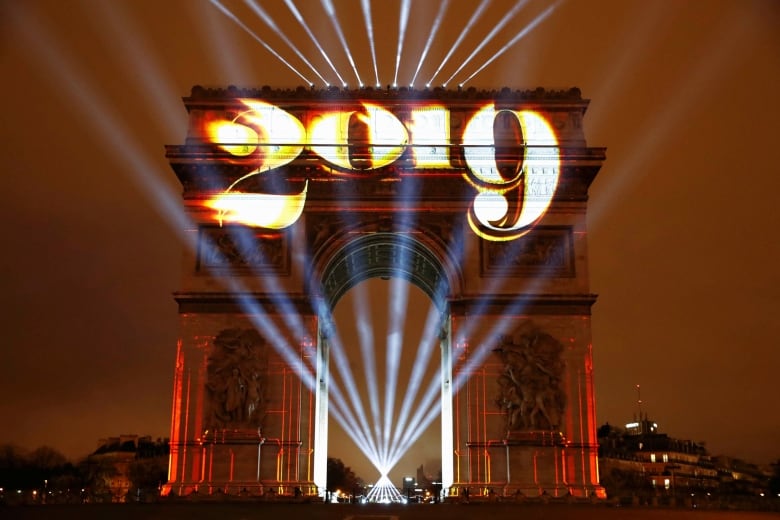 Britons ushered in the new year with the familiar chimes of Big Ben, even though the world-famous clock has been disconnected for more than a year because of a conservation project.

Parliament announced last week that the clock’s massive bell would sound to mark the new year with the help of a specially built electric mechanism to power the hammer, which weighs about 200 kilograms. The clock mechanism, which has kept time since 1859, has been dismantled as part of the renovation work.

Despite being disconnected for more than a year for renovations, Big Ben’s massive bell sounded to mark the new year with the help of a specially built electric mechanism to power the hammer. 0:56

New York City’s Times Square erupted with fireworks and cheers at the stroke of midnight on Tuesday as thousands of hardy merrymakers braved pouring rain and watched the glowing New Year’s Eve ball complete its midnight descent to mark the start of 2019. 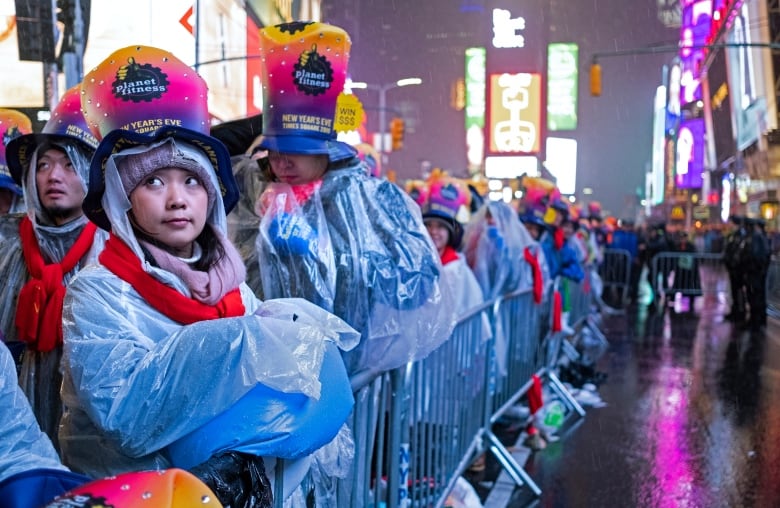 For the multitudes who gathered in the famed midtown Manhattan crossroads, the thrilling moment was reward for enduring hours of standing in a steady downpour during the waning hours of 2018.

Helping to keep spirits high was a slate of performers including Christina Aguilera, New Kids on the Block and Sting who entertained the resilient crowd. Many donned plastic rain ponchos and sported colourful, oversized top hats handed out by organizers.

It was a wet celebration in Toronto, too, where revellers braved the soggy conditions for an all-ages, alcohol-free evening of DJ skating parties, live music and fireworks. 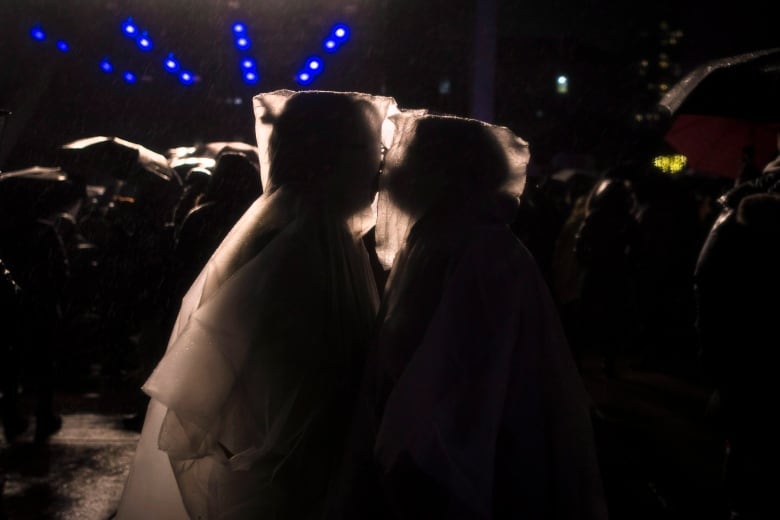 “Every success and milestone our country celebrates tonight, we’re able to celebrate because of you]. It’s your hard work, your ambition and all your acts of perseverance and kindness that change lives and our country for the better.

“On behalf of the government of Canada, Sophie and I wish you and your loved ones a wonderful night and health, peace and happiness for 2019,” he said about his wife, Sophie Grégoire Trudeau.