Hundreds of thousands of customers lost power as strong winds and heavy snow began pummelling the Atlantic provinces on Thursday morning. The number of outages had fallen considerably by sunset, but the New Brunswick and Prince Edward Island utilities say many will spend the night in the dark.

Around 4 p.m. AT, Environment Canada issued warnings for wind and storm surges in P.E.I and eastern Nova Scotia. The federal agency is advising the public to stay away from shorelines as “higher than normal” water levels are expected and coastal flooding is a possibility.

Winds gusting to 100km/h are forecast for those regions.

The agency also issued snowfall and wind warnings for central and southern Newfoundland and Labrador, and it is cautioning eastern New Brunswick against large waves and pounding surf.

NB Power crews have whittled down the number of affected customers to 16,400, from 46,000 earlier in the day. All of the outages are located in southeastern New Brunswick.

Utility spokesperson Marc Belliveau said 80 NB Power crews and 47 contractors were dispatched for the restoration effort, and more contractors have been called in.

“We’ll be working well into the night on all of those outages,” he said.

In P.E.I., outages peaked at 51,000 customers for Maritime Electric — that number has dipped to 42,000 in the early evening — and all 7,000 Summerside Electric customers were also out. 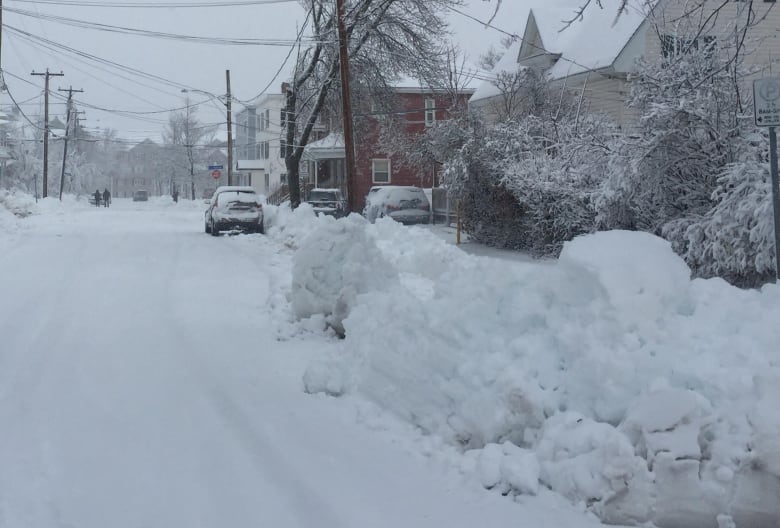 Several school closures have been reported in the Moncton, N.B., area on Thursday morning. (Shane Magee/CBC)

The storm took down power lines and poles on the island, but at about 9:15 a.m. NB Power stopped transmitting electricity through the underwater cable that connects the island to the mainland.

That cable is, under normal conditions, the source of most of the Island’s electricity. That leaves Maritime Electric faced with both firing up on-Island generation and repairing extensive damage to its infrastructure.

“Based on the storm situation that we have right now, in our current assessment, I believe we will not have everybody back on tonight,” said Maritime Electric spokesperson Kim Griffin.

Power outages across the Maritimes peaked Thursday at more than 300,000 customers — nearly 250,000 of those customers were in Nova Scotia.

We’ve restored electricity to over 200,000 customers since noon today, thanks to the hard work of our teams across the province and protective devices on our grid. Crews continue to work to safely restore power as quickly as possible. Read more: <a href=”https://t.co/yHxBo2gYiE”>https://t.co/yHxBo2gYiE</a> <a href=”https://twitter.com/hashtag/NSStorm?src=hash&amp;ref_src=twsrc%5Etfw”>#NSStorm</a>

Tiffany Chase, a spokesperson for Nova Scotia Power, said the problem affecting much of the mainland originated in Cape Breton, where heavy snow and tree branches on power lines caused an interruption in the transmission system near Port Hawkesbury.

Schools across Atlantic Canada were closed or had delayed openings, and ferry service between Newfoundland and Labrador and Nova Scotia was cancelled until the winds could die down. The Confederation Bridge between P.E.I. and New Brunswick had restricted travel.

Isabelle LeBlanc, director of communications for the City of Moncton, said streets remained slippery and covered with snow. 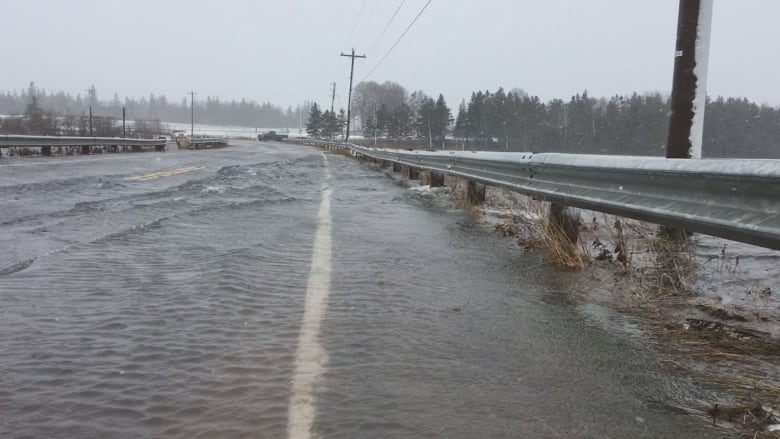 The causeway at Brackley Beach in P.E.I. was flooded Thursday afternoon. (Pat Martel/CBC)

LeBlanc said salt crews have been out since shortly after midnight and snow removal equipment is clearing city streets.

But she still advised motorists to drive with caution while out on the roads.

“For now everything is business as usual for the City of Moncton.”

Codiac Transpo will be out on the roads, but buses could be pulled off if winds start to pick up and reduce visibility.

“Our main concern right now is the wind and the wind is supposed to pick up,” she said.

“So we’re going to keep a close eye on that.”

Al Giberson​, general manager for MRDC, the company that maintains the Trans-Canada Highway between Moncton and Fredericton, said there was slush, and snow was blowing and drifting toward the Moncton area of the highway.

“There’s going to be some reduced visibility in the eastern section of the Trans-Canada Highway this morning,” he said.

Although the highway was salted, he advised motorists to drive slowly, allow space between other drivers on the road and give themselves lots of travel time.

Salt is not very effective after temperatures drop below minus ten degrees Celsius. So what are the alternatives? CBC New Brunswick’s Maria Jose Burgos explains why beet juice might be a good choice. 2:26

“We have to be aware of the driving conditions and adjust our speeds and driving style to accommodate that,” he said.

“If you absolutely have to [drive], conditions get a little bit better as you travel west but there is a bit of snow and there is some slush on the road.”