A portrait of soldier and poet Wilfred Owen, which was carved into the sand in a poignant tribute to the brave soldiers who lost their lives during the First World War, has been washed away by the sea.

Large-scale drawings of dozens of soldiers have been drawn on 32 beaches, stretching from deepest Cornwall to the Outer Hebrides, as part of an imaginative UK-wide event thought up by film maker Danny Boyle.

As part of the tribute, many of the portraits have been washed away as the tide came in, representing how life can come and go in an instant.

Hundreds gathered at coastal sites across England, Wales, Scotland, North Ireland and the Republic of Ireland today to watch the spectacle unfold.

Owen’s portrait has been drawn at Sunny Sands in Folkestone, Kent. Known for his poems such as Dulce et Decorum Est he was awarded the Military Cross for gallantry before being killed in action aged 25 on November 4, 1918, one week before the signing of the Armistice. 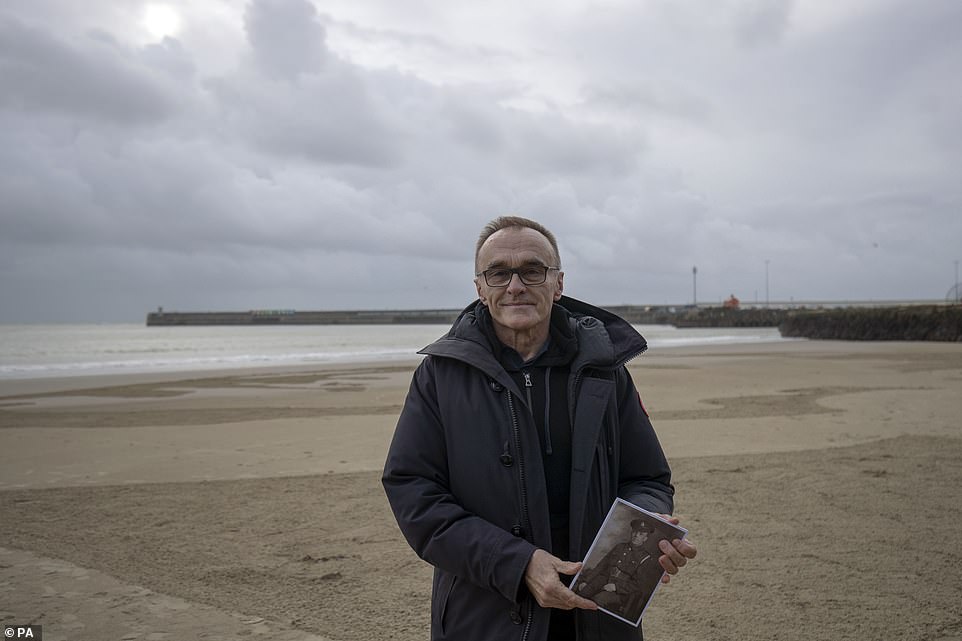 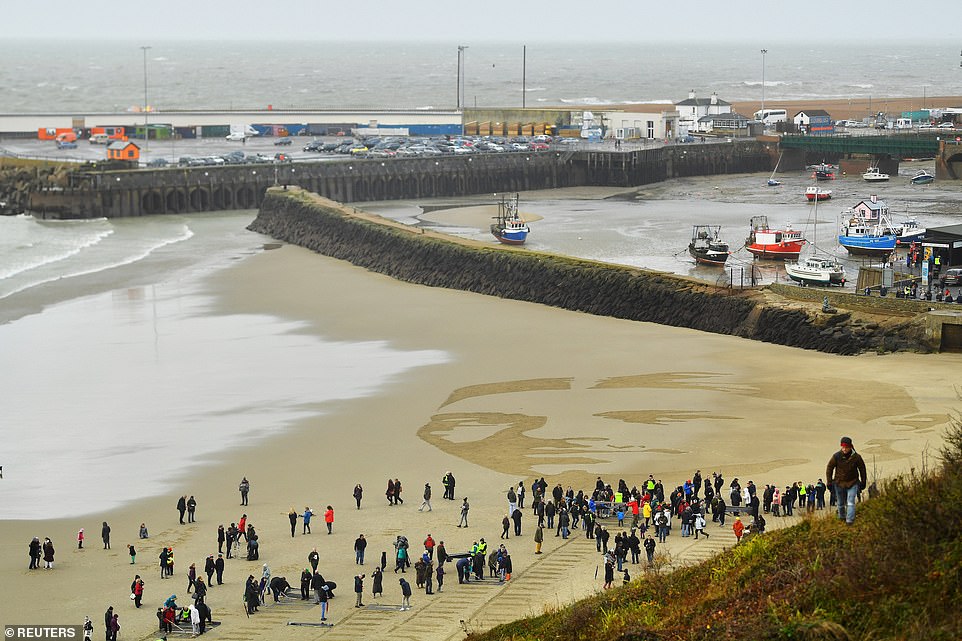 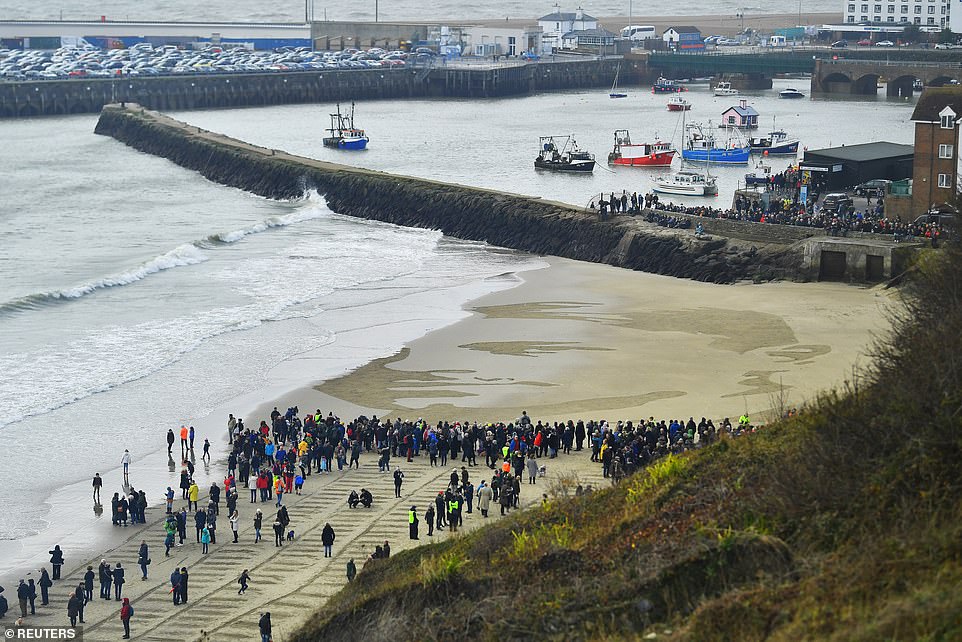 As part of the tribute, many of the portraits have been washed away as the tide came in, representing how life can come and go in an instant 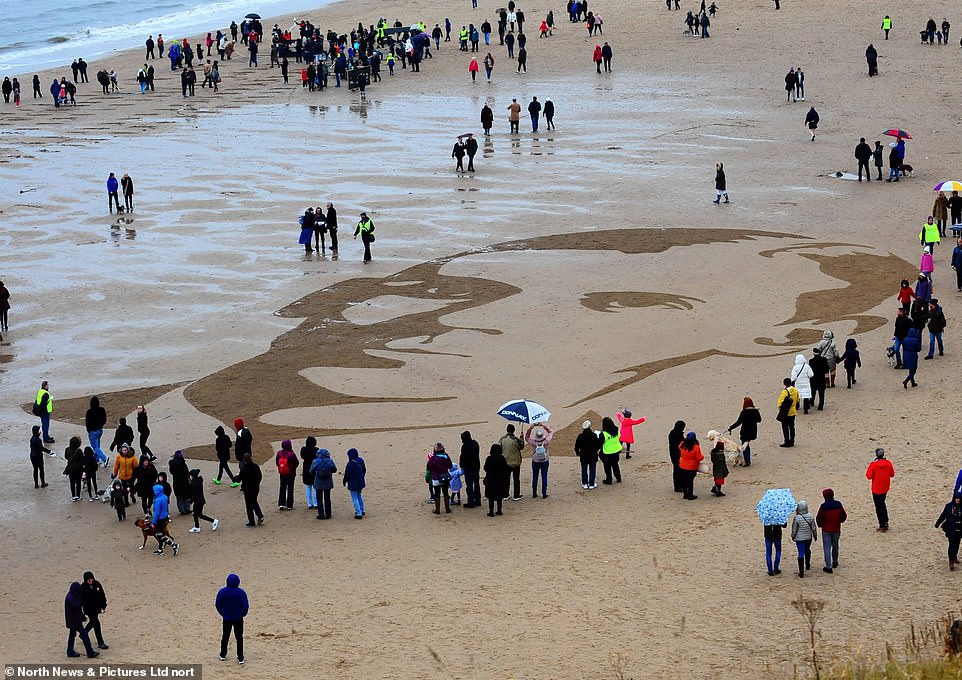 Crowds mill around the giant sand sculpture of Second Lt Hugh Carr, who was fatally wounded in the Ypres Salient, Belgium, in January 1916 when a German shell landed near his trench 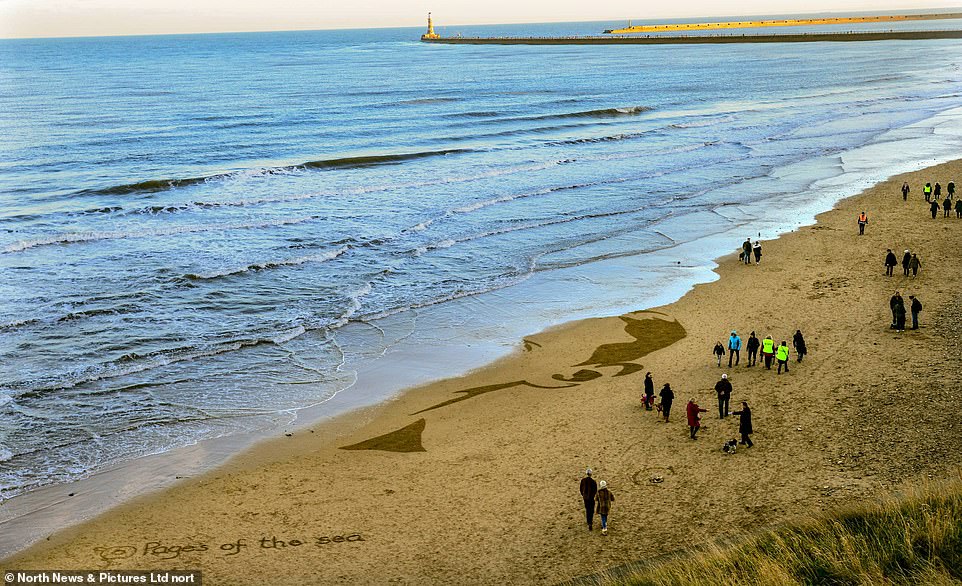 The tide washed away the giant sand sculpture of Second Lt Hugh Carr at Roker beach in Sunderland this afternoon, as part of the Pages of the Sea tribute 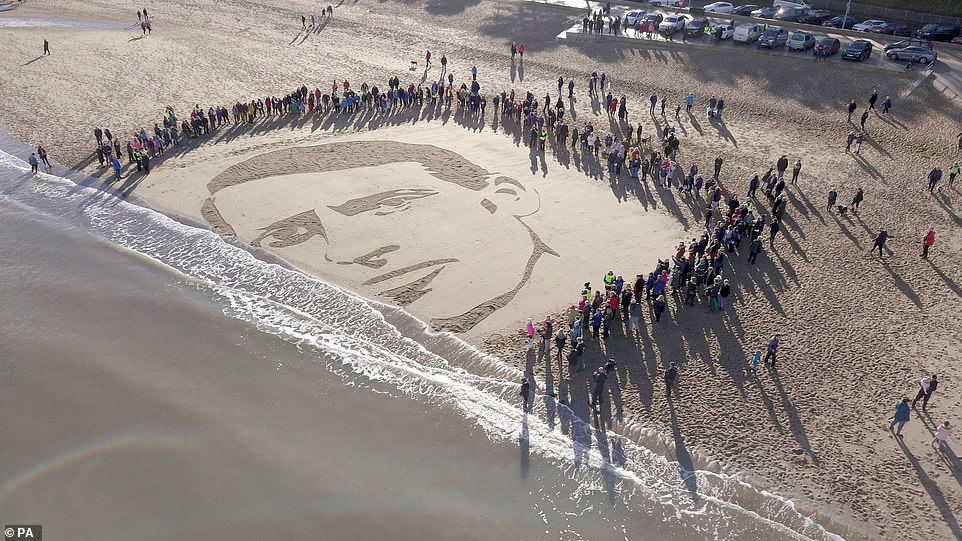 First World War soldier and poet Private Ellis Humphrey Evans sculpted into the sands at Colwyn Bay, Conwy, made as part of the nationwide commemorative event on the 100th anniversary of the signing of the Armistice 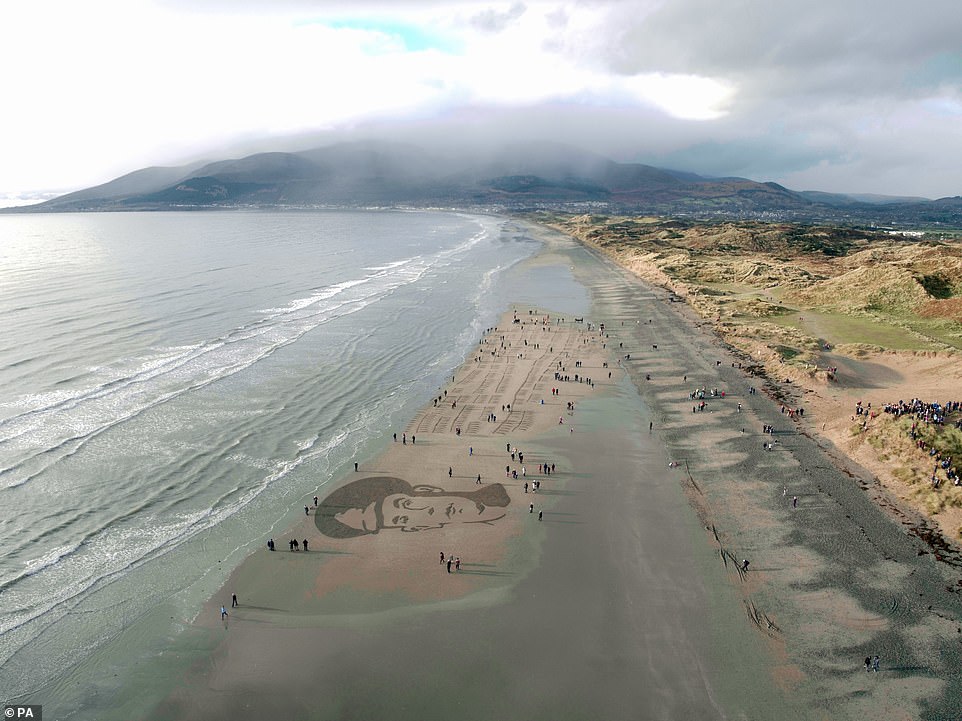 First World War soldier John McCance was pictured on the sands of Murlough Beach, County Down 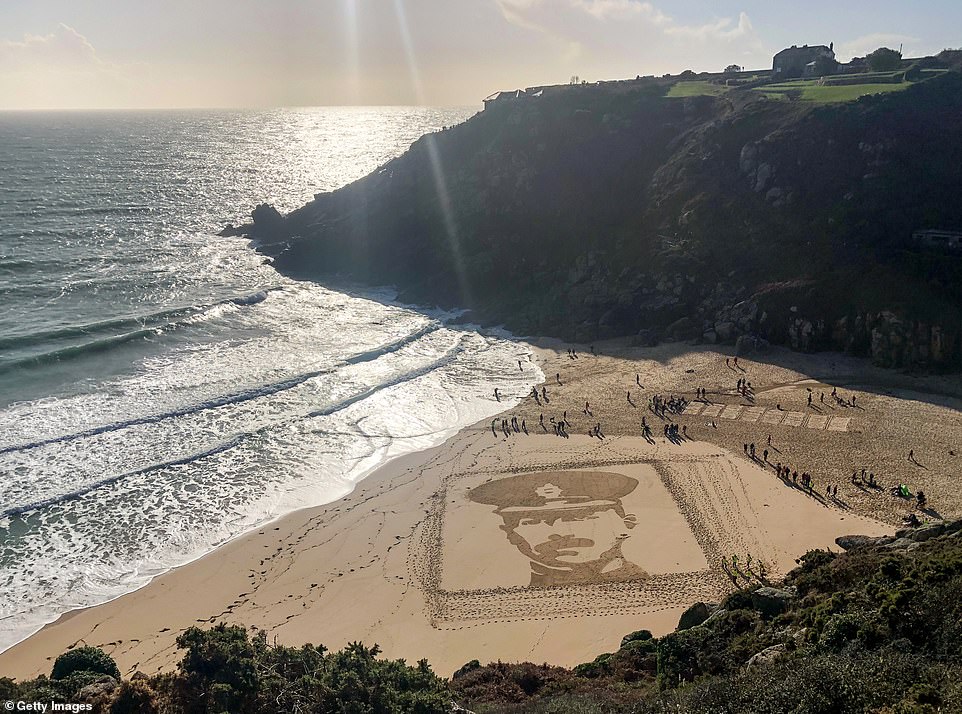 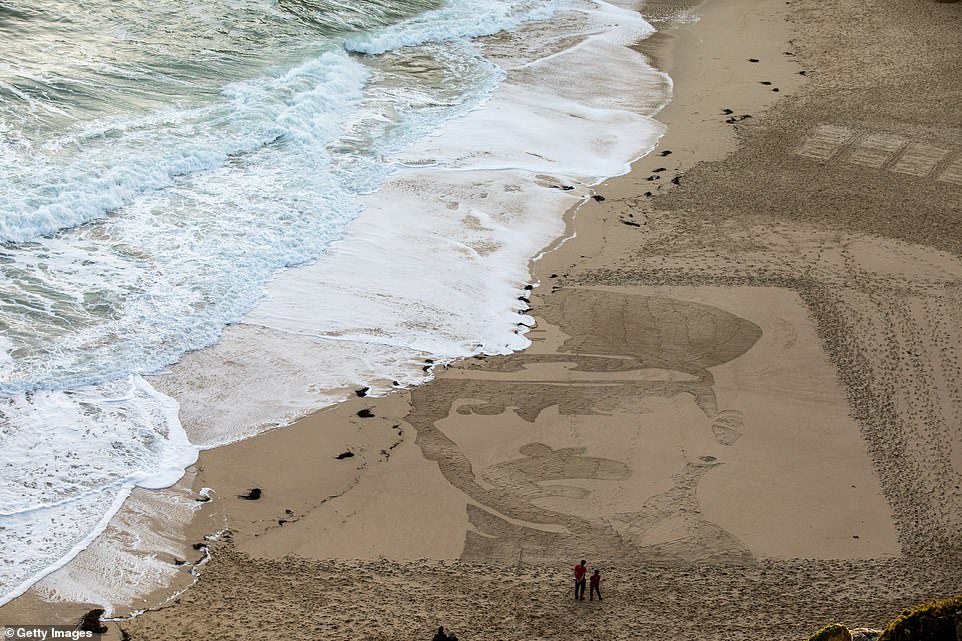 Lieutenant Graves-Sawle was in the Coldstream Guards and grew up in Cornwall. He was 26 when he was killed by a sniper’s bullet near Ypres on November 2 1914 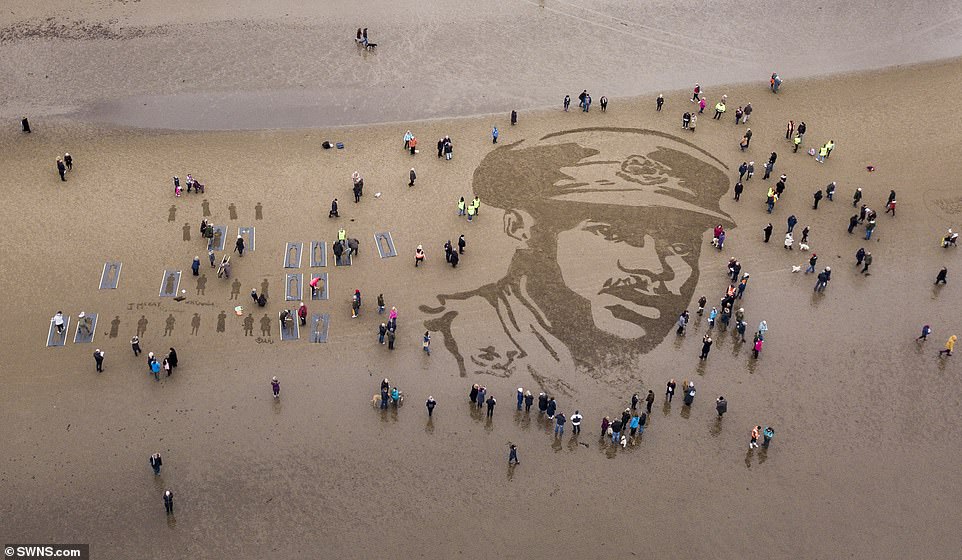 A sand drawing on Ayr Beach of Second Lieutenant Walter Tull, who was Britain’s second black professional footballer who had signed up with Rangers, and the first black officer in the British Army 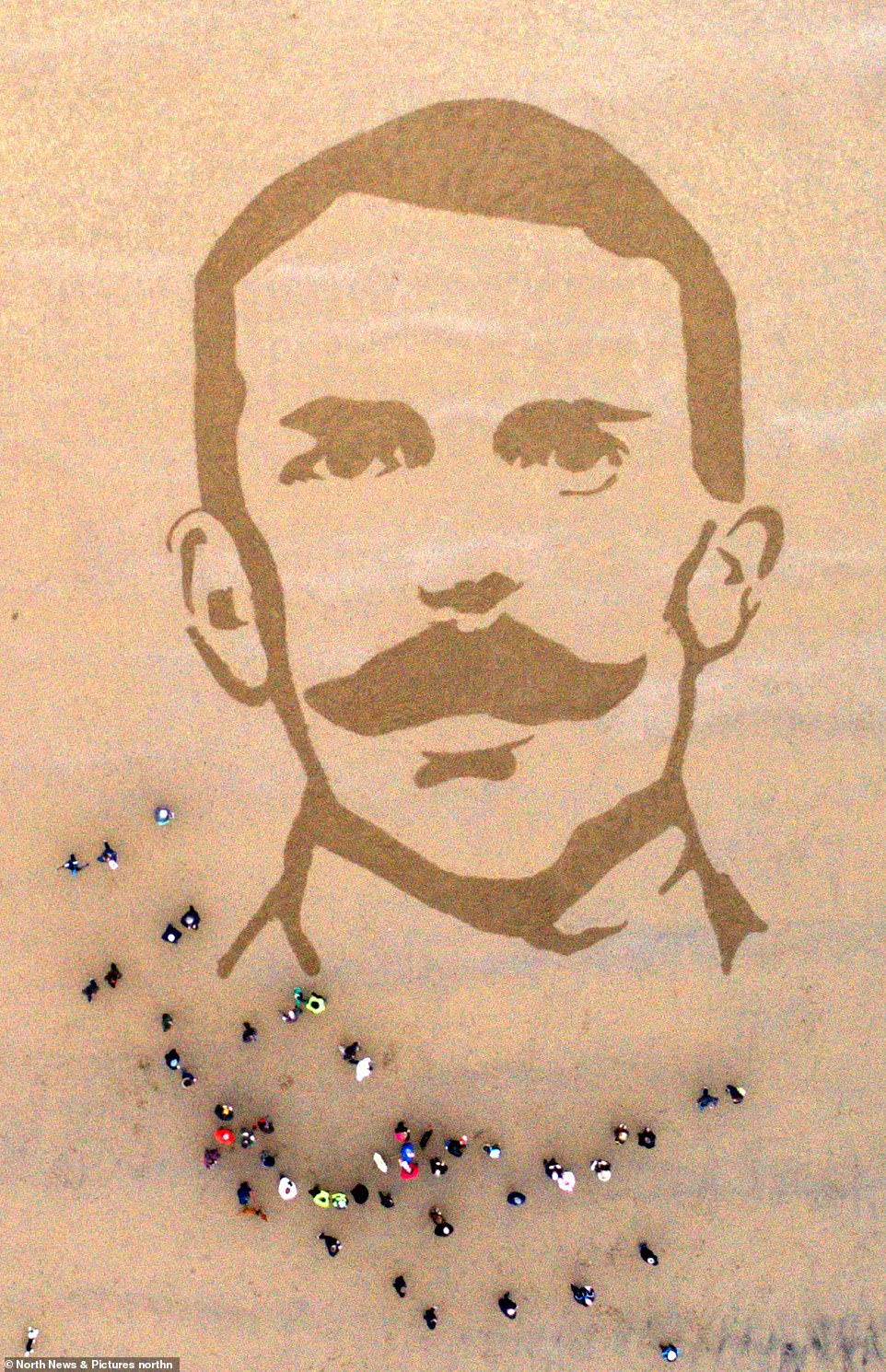 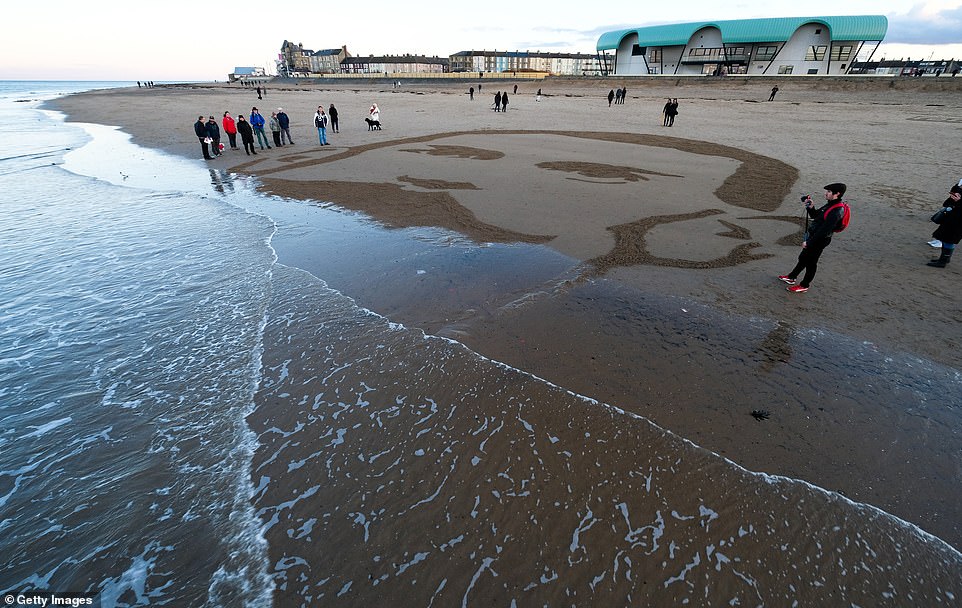 Private Jones was the first British soldier to lose his life on English soil in the First World War on December 16, 1914 in nearby Hartlepool 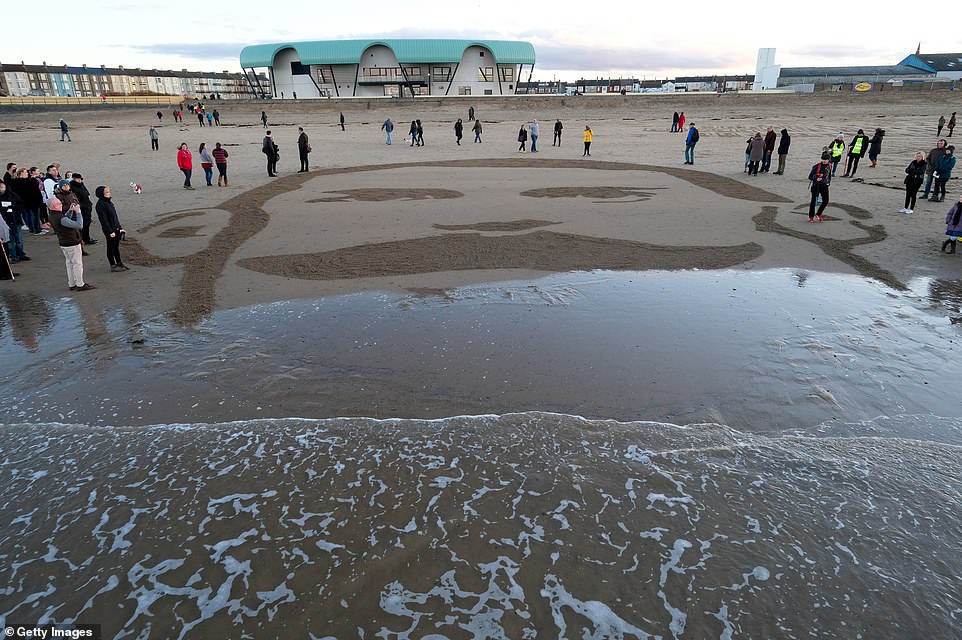 The fallen soldier, from Darlington, was guarding the Heugh Gun Battery in Hartlepool when German warships bombarded the town, targeting an iron works and shipyards 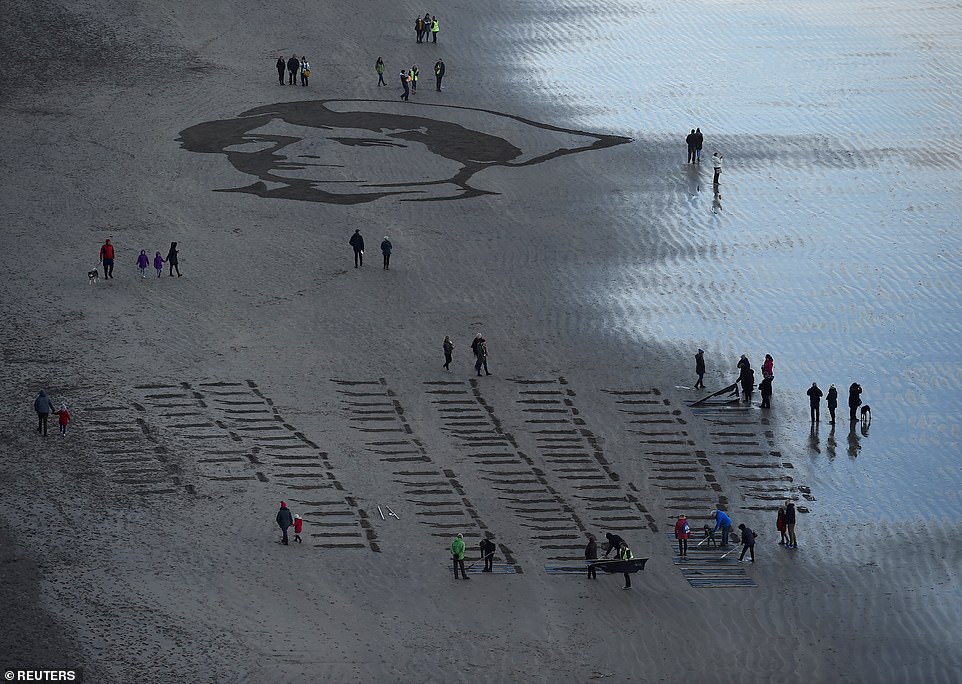 The time lapse of Wilfred Owen’s portrait being washed away was uploaded to Twitter by user @asiansnax.

Blackpool beach will honour Lance Corporal John Edward Arkwright, one of the first Lancastrians killed during the war. He was killed in action on August 26, 1914 aged 23.

In Swansea, ‘munitionette’, or munitions factory worker, Dorothy May Waston will be featured. She and her sister Mildred Owen, were killed in an explosion as they ferried bags between buildings on site in July, 1917.

Their funeral drew a huge crowd, with their coffins draped in Union Jacks while fellow workers, many in uniform, acted as bearers.

The British Army’s first black officer Walter Tull’s portrait will be on Ayr beach in Scotland. Before the war, he found fame as one of Britain’s first black footballers with Tottenham Hotspur. 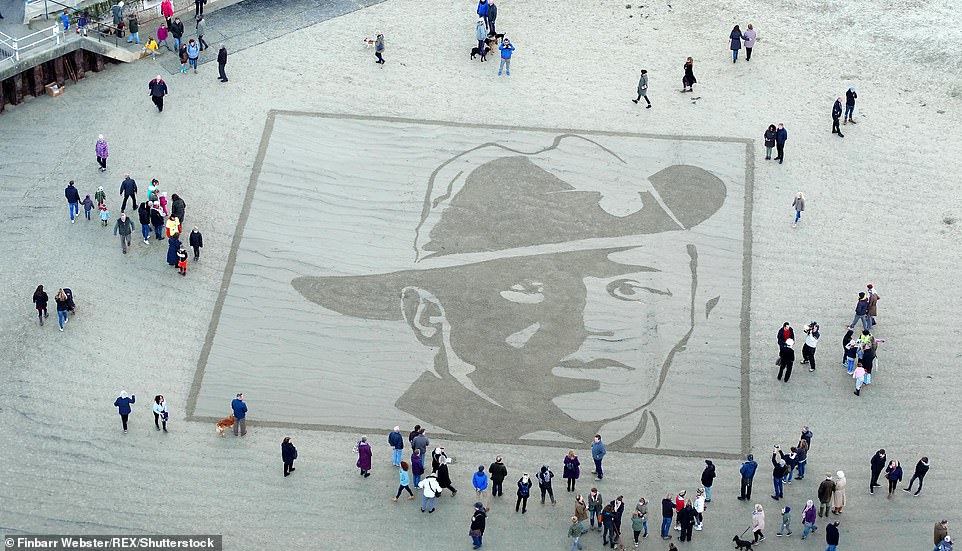 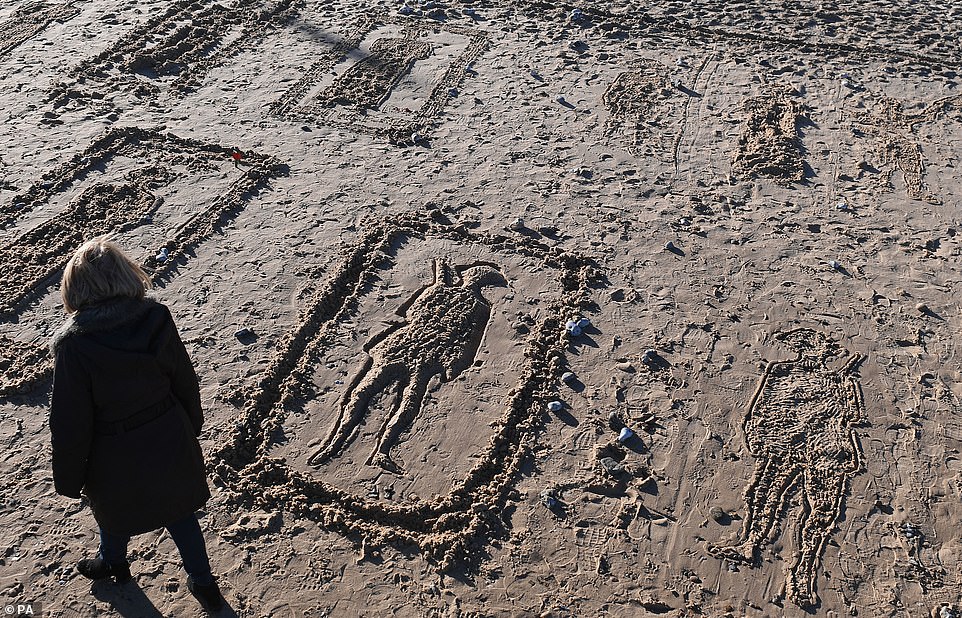 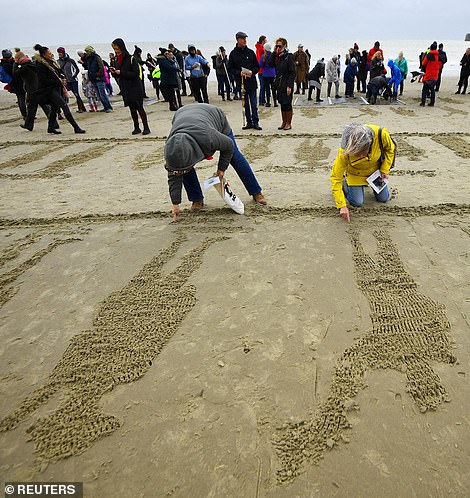 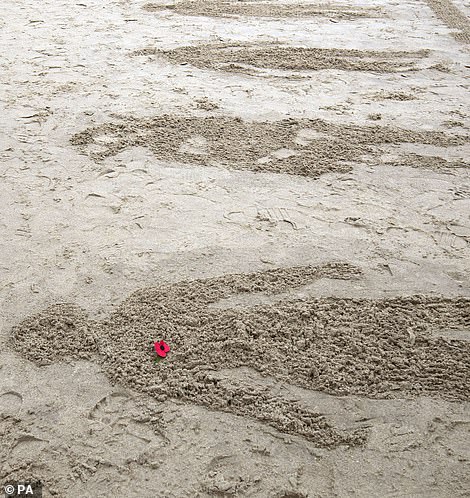 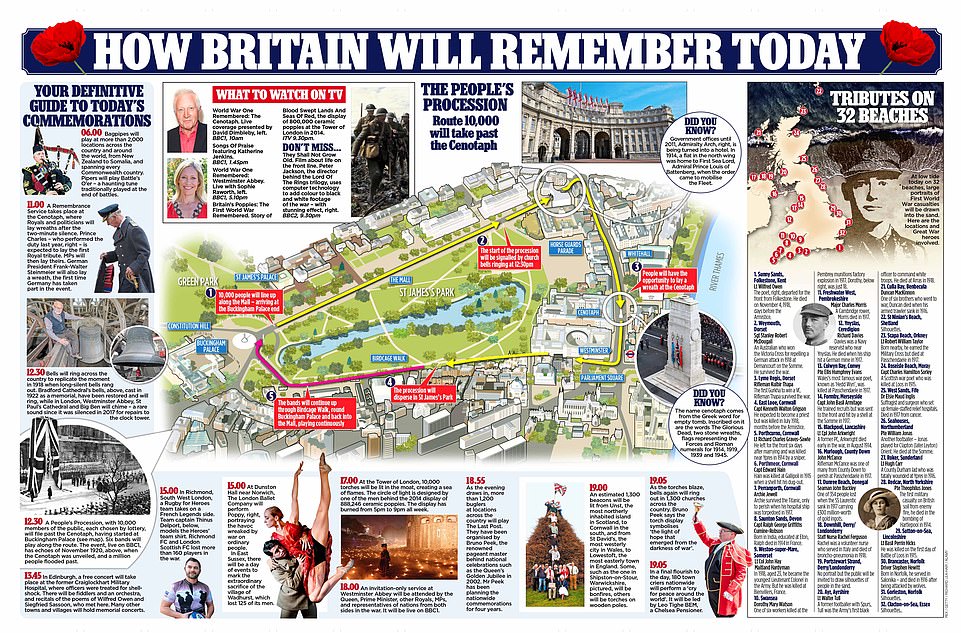 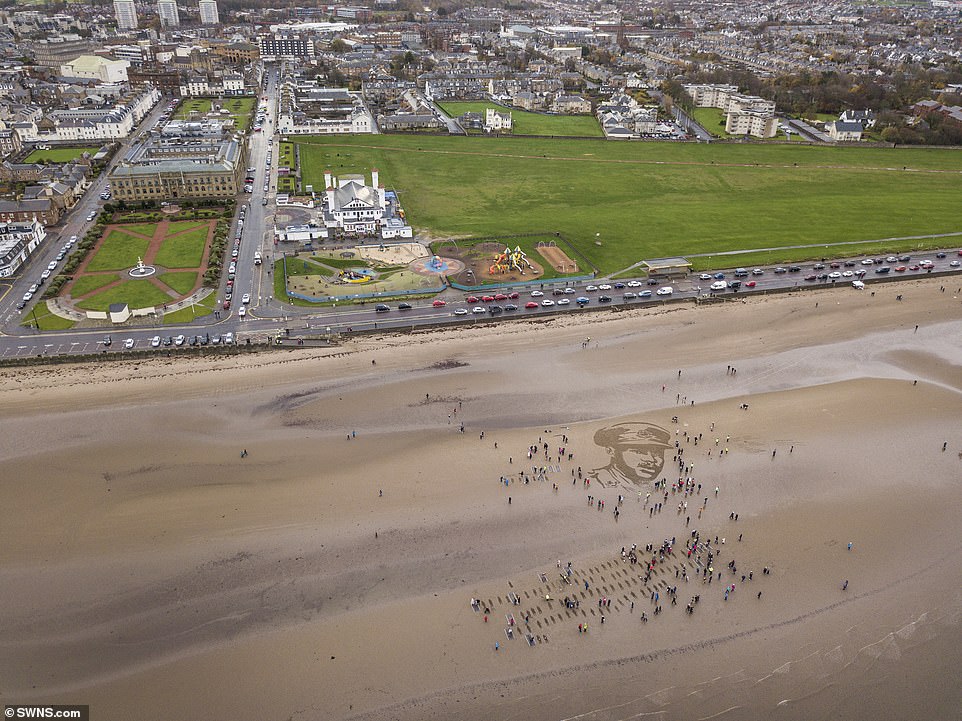 The British Army’s first black officer Walter Tull’s portrait will be on Ayr beach in Scotland. Before the war, he found fame as one of Britain’s first black footballers with Tottenham Hotspur 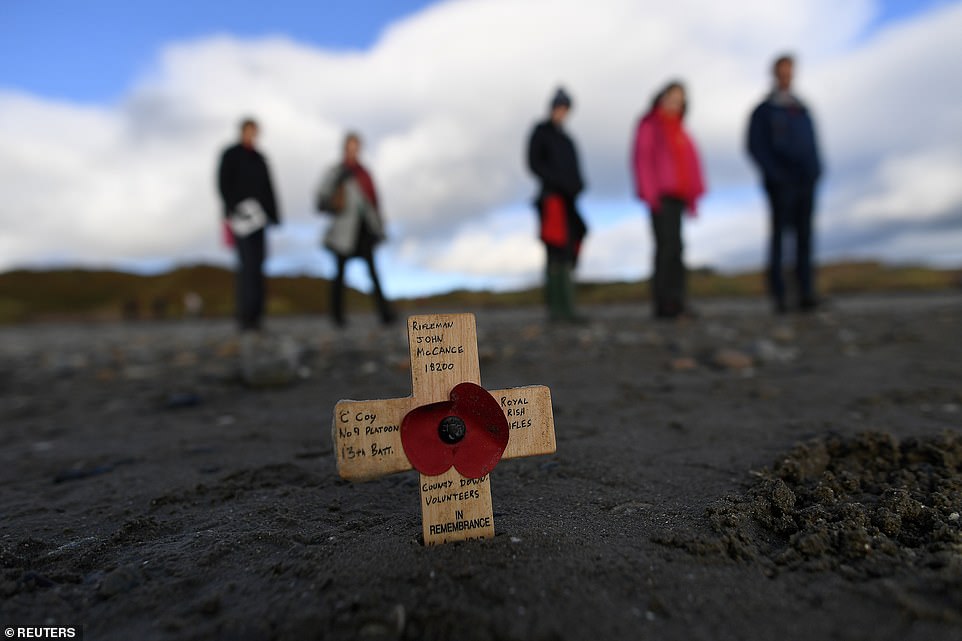 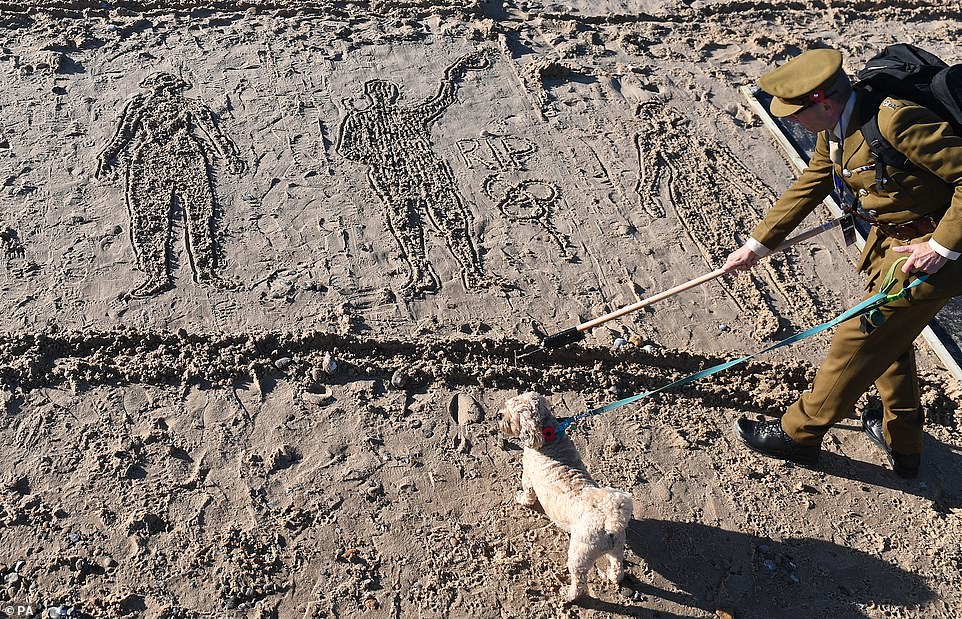 He was killed in March 1918 at Arras. Although his men tried to rescue their officer after seeing him shot, his body was never found.

Doctor Elsie Maud Inglis, a suffragette, will be drawn on West Sands. Fife. At the outbreak of war, she was instrumental in setting up the Scottish Women’s Hospitals for Foreign Service Committee, a body funded by the suffrage movement to provide all-female care.

Rebuffed by Great Britain’s War Office, which told her to ‘go home and sit still’, Inglis’s help was accepted by the French, who sent her unit first to Serbia, where she was instrumental in improving hygiene to reduce epidemics such as typhus.

Despite being captured and repatriated in 1915, Inglis then went to work in Russia before she was diagnosed with a terminal illness and returned to Britain in November 1917. She passed away the day after she arrived home.

In Donwhill, Derry, tribute will be paid to staff Nurse Rachel Ferguson, who was part of Queen Alexandra’s Imperial Military Nursing Service, one of the main providers of female nurses for the British Army. 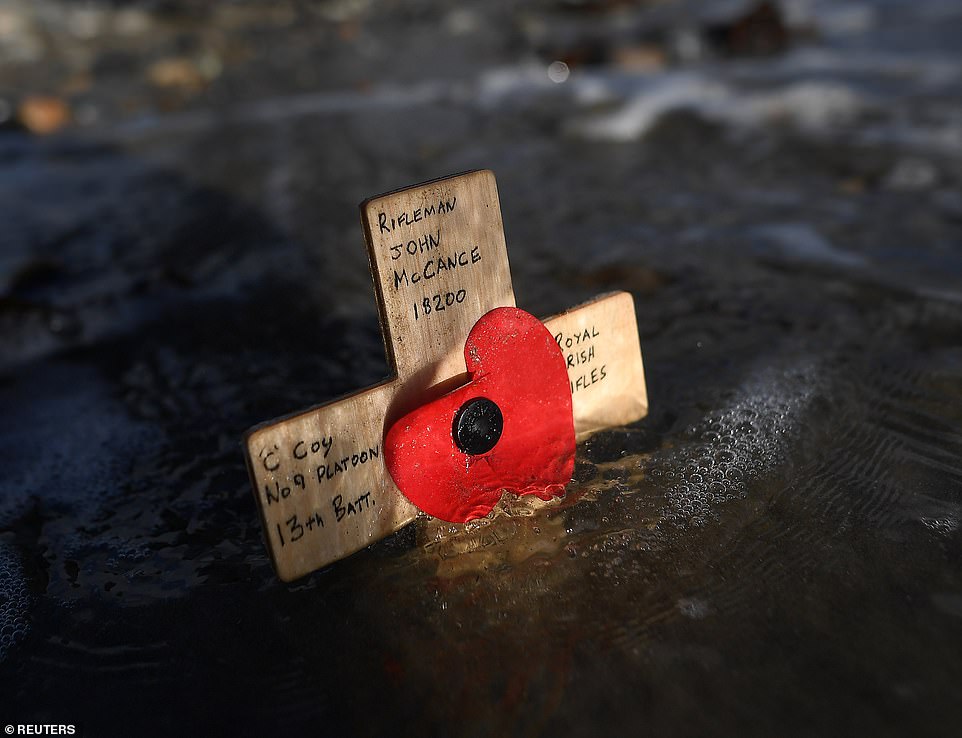 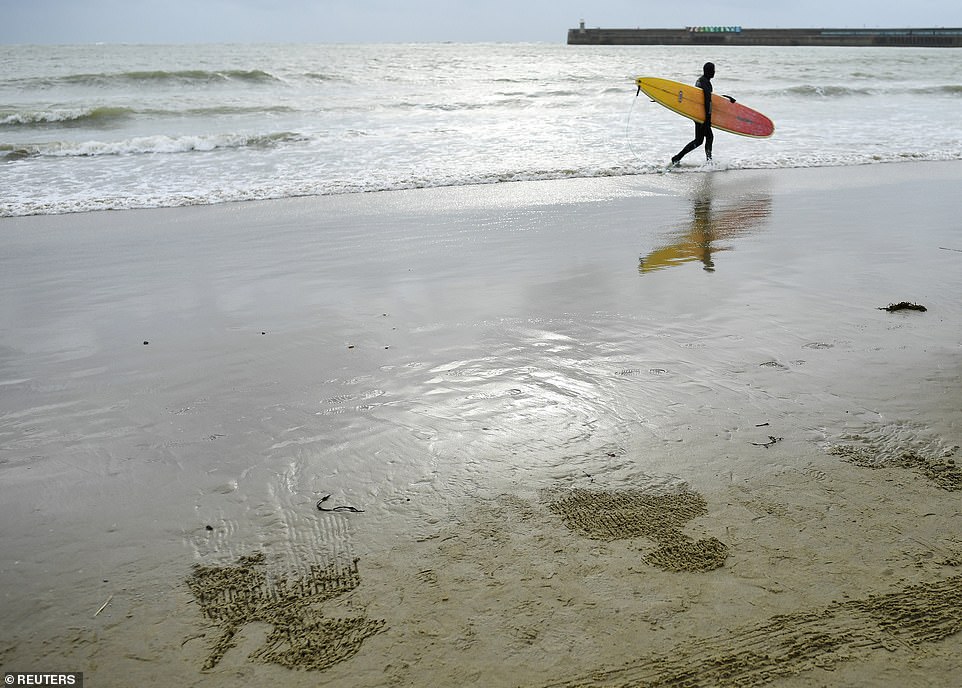 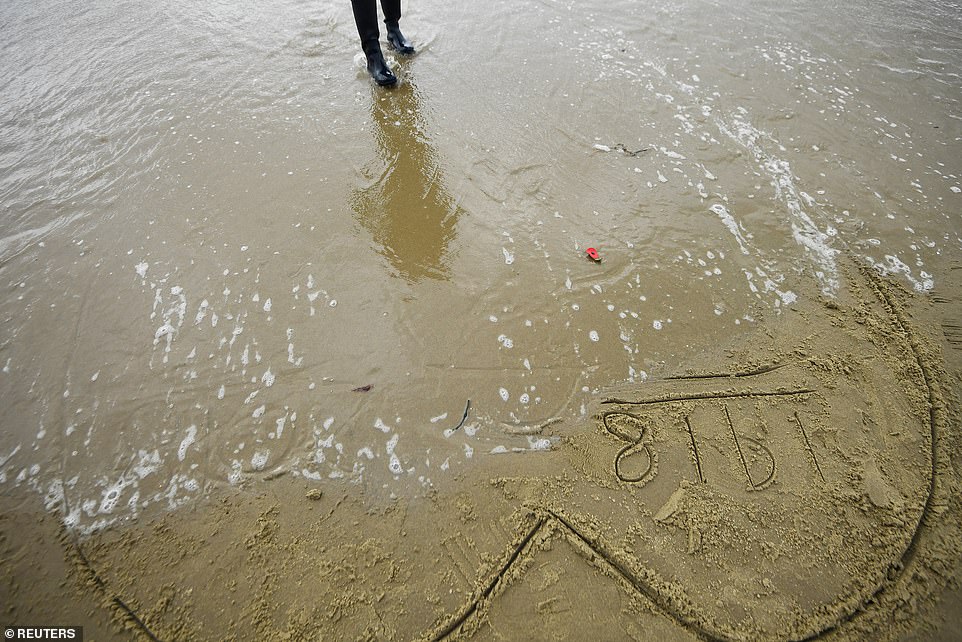 Hundreds gathered at coastal sites across England, Wales, Scotland, North Ireland and the Republic of Ireland today to watch the spectacle unfold

A series of events will take place across the UK to mark 100 years since the end of the First World War. Here is a look at how some people will mark the centenary of the Armistice.

National Service of Remembrance at the Cenotaph

The Prince of Wales will once again lead the nation in honouring the country’s war dead during the national service of remembrance. The Queen has asked Charles to lay a wreath at the Cenotaph in Whitehall on her behalf – the second successive year he will perform the duty. The Queen will watch from the balcony of the Foreign and Commonwealth Office building, as she did last year. After Charles has laid a wreath, other floral tributes will be left by members of the royal family, senior figures from the Government, including Prime Minister Theresa May, and opposition party leaders and other figures from national life. For the first time, a German leader will lay a wreath at the Cenotaph, with President Frank-Walter Steinmeier performing the duty on behalf of his nation in a historic act of reconciliation.

A Nation’s Thank You

The Queen, Charles and Camilla, William and Kate, and Harry and Meghan will attend a service at Westminster Abbey. During the day, church and other bells will ring out as they did at the end of the First World War – and a Westminster Abbey service will be held along with others in Glasgow, Cardiff and Belfast, to give thanks for peace and those who returned. During the Welsh Guards’ Regimental Remembrance Sunday, Charles will attend a service in the Guards’ Chapel with service personnel and their families. He will then lay a wreath at the Guards’ Memorial.

Pages of the Sea

Director Danny Boyle is asking people to gather on beaches across the UK on November 11 and etch silhouettes in the sand ‘remembering the millions of lives lost or changed forever by the conflict’. Events will take place at low tide at a number of beaches, including Perranporth in Cornwall, Clacton-on-Sea in Essex, and St Ninian’s beach in Shetland.

Battle’s Over is a series of hundreds of local events to mark the centenary of the Armistice. Pipers will play, beacons will be lit and church bells will ring in all corners of the UK and around the world as communities pay tribute to the First World War fallen. Described as a nation’s tribute, Battle’s Over has been in the planning for four years and will see hundreds of locally-organised events mark the centenary.

The National Memorial Arboretum in Staffordshire is the year-round centre for remembrance for service personnel. It is set in woodlands and gardens and features more than 350 memorials, including the main Armed Forces Memorial. Every year, there is an annual dedication of names ceremony at the forces monument, adding those who have fallen while on active service to its high walls – and a chance for visitors to reflect on the spaces yet to be filled by fresh engravings. The memorial will again be a focus of reflection, with up to 6,000 people expected to gather on Sunday.

The anchor concert will take place at Edinburgh Napier University’s Craiglockhart Campus, the site of a former military hospital for shell-shocked officers during the Great War, and will include musical performances from George Watson’s College Symphony Orchestra and Scottish fiddlers.