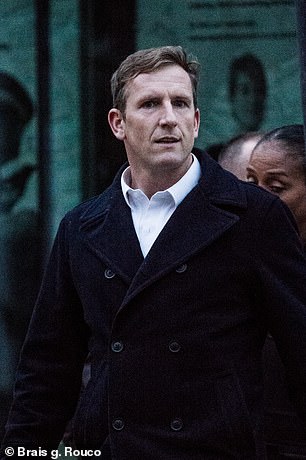 Kyle Blood, 38, pictured leaving a Metropolitan Misconduct Hearing in Fulham yesterday, was previously cleared of sexually assaulting a woman by a jury

A police officer fighting for his job despite being cleared of rape and sexual assault in court, ‘did not care one way or the other about consent’, a disciplinary hearing was told today.

Pol Sgt Kyle Blood, was cleared of sexually assaulting a woman by a jury but a judge publicly cast doubt over his fitness to wear the uniform.

The 38-year-old but is now facing a Metropolitan Police disciplinary hearing over his actions.

Blood was making his way home from a night out in Soho, central London, where he had been drinking cocktails and downing shots of Sambuca in the early hours of June 17, 2016.

Both he and the woman boarded a Thameslink train at Kings Cross Station shortly after 11:20pm and he performed a sex act on her between St Albans and Harpenden, it was said.

Stephen Morley, for the Met Police, said: ‘Sergeant Blood admitted breaching the standards. The only really issue is consent.

‘Although consent is a big issue the appropriate authority takes the view that it makes no difference because we will be asking you to dismiss the sergeant.

‘The evidence suggests that he really did not care one way or the other about consent.

‘He knows about vulnerable people, he deals with them all day in work. He knows about consent. He did not make a mistake, he knew what he was doing.

In cross examination Blood said he would run when he was out on a night out, describing it as one of his ‘mannerisms’.

But Mr Morley told the Metropolitan Police disciplinary hearing: ‘Clearly unbelievable – much more likely he was simply running away from trouble, because he knew he was in trouble.’

He said within minutes of getting off the train at Luton he lifted up a woman at the White House pub and kissed her.

Blood’s lawyer Aisla Williamson admitted the sergeant made rapid advances on women. She said: ‘It is clear in recent years that the rules of dating have changed dramatically.

‘It is not a breach of professional standards for an officer to go to a club and kiss, talk and drink with a person they find attractive with their consent.’ 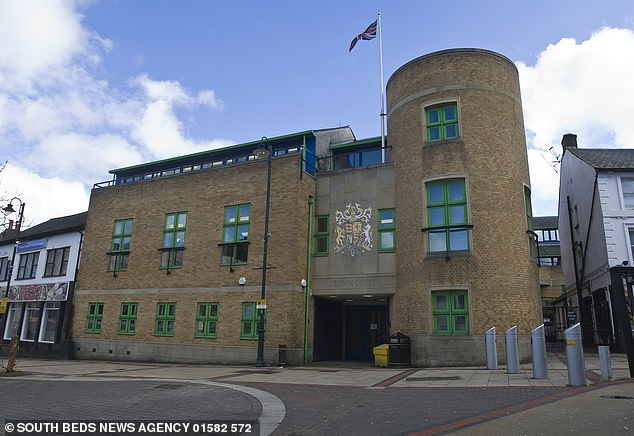 During Blood’s trial, the woman from the train had claimed she awoke to find him assaulting her, but a jury at Luton Crown Court (pictured) cleared him of assault by penetration

Colleagues of Blood testified to his character on the second day of the hearing, describing d him as ‘professional’ and ‘committed to providing a good service to the community.’

When first arrested Blood spent nine hours in a police cell waiting for questions from his colleagues and advice from his lawyer.

During Blood’s trial last year, the woman had claimed she awoke to find him molesting her, but a jury at Luton Crown Court cleared him of assault by penetration.

Following his trial in October last year Blood was also cleared of raping a woman in January 2016 after they met on the website Plenty of Fish.

The officer admits he breached the standards of his profession in a gross manner but denies the 31-year-old was asleep when he made his advances.

Blood joined the police in 2002 and has worked in Enfield, Walthamstow, and Barking.

He became a sergeant in 2012 and was 36 at the time of the brief encounter.

He said he first wanted to join the force after he was mugged with a friend outside a swimming baths in Leicestershire when he was 14, and now dreads the prospect of losing his job.

Blood, from Luton, is facing a single allegation of gross misconduct concerning his actions on board the train on 17 June 2016.

The hearing continues tomorrow when the panel is due to return its findings of fact.