They Shall Not Grow Old aired on BBC2 to mark Remembrance Day yesterday and was created using the Imperial War Museum’s archives of silent black-and-white war footage.

The images have been colourised, retouched and stabilised before being dubbed with a soundtrack of banter, explosions and screams from the men who fought for Britain between 1914 and 1918.

Over the top runs a commentary made up of more than 120 war veterans as they reflected on the conflict in recordings captured in the 1960s and 1970s.

The film has proven to be a hit with audiences who hailed the director for showing a whole new generation of Brits the true horrors of the First World War. 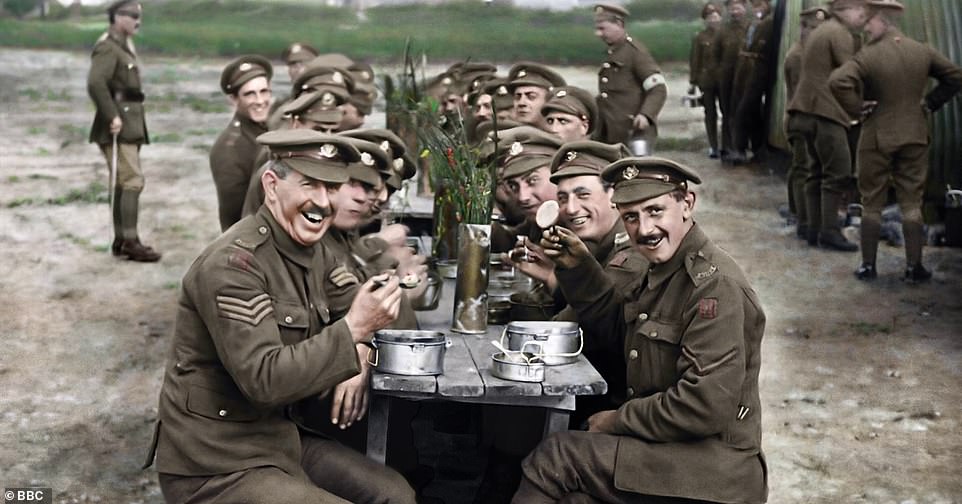 Peter Jackson’s new film has been praised by viewers for its harrowing portrayal of the Great War in They Shall Not Grow Old on BBC2 last night. Black and white images were brought to life by Jackson’s work that took more than four years to complete 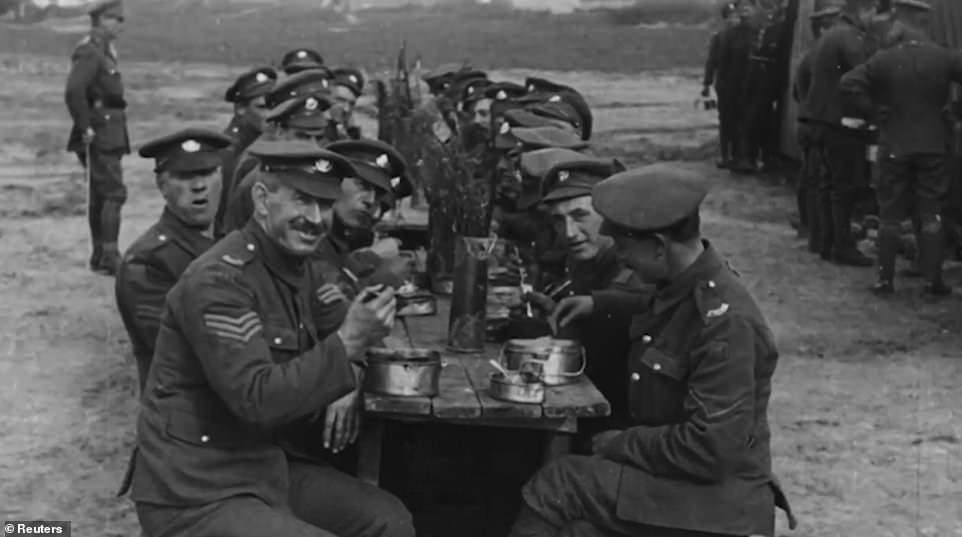 The original black and white clip (pictured) was recreated in colour to ‘reach through the fog of time to pull these men [Britain’s World War One soldiers] into the modern world’, according to director Peter Jackson

Taking the Lord Of The Rings director more than four years to complete, Jackson edited hundreds of videos to produce the final piece, which masterfully melts black and white scenes into brightly coloured video.

Computers were used, not only to add colour to black and white footage, but to remove imperfections, fill splices and reconstruct missing frames from film that was shot with far fewer frames per second than today.

Jackson also recruited forensic lip readers who usually work with the police to de-code conversations that took place in the trenches and on the battlegrounds 100 years ago.

Winning nearly universal acclaim on social media, the film shows how soldiers, some just gawky teenagers, struggled on the front lines and in the trenches.

One incredible clip shows a group of soldiers marching through the mud in black and white before the images suddenly come to life in colour.

Another of the most iconic images from the film is of a group of Tommies, smiling and joking as they share a meal together, with a series of flower vases in the middle of them, fashioned from empty shell cartridges.

This poignant image, shared by mesmerised viewers on social media yesterday evening, shows members of the 12th Battalion, the East Yorkshire Regiment, on the Western Front in the autumn of 1917.

Jackson’s painstaking efforts humanise the story of the Great War in a way that can scarcely be done now that no veterans remain alive.

Emotional viewers, many of whom had grandparents and other relatives who died in the conflict, even called on Jackson to be knighted for his work on the film – despite the fact he already has one – receiving one in 2010. 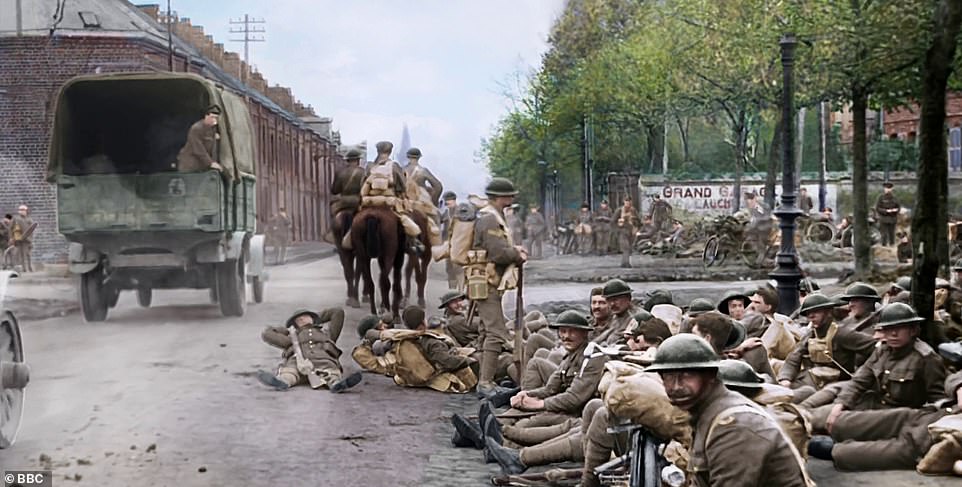 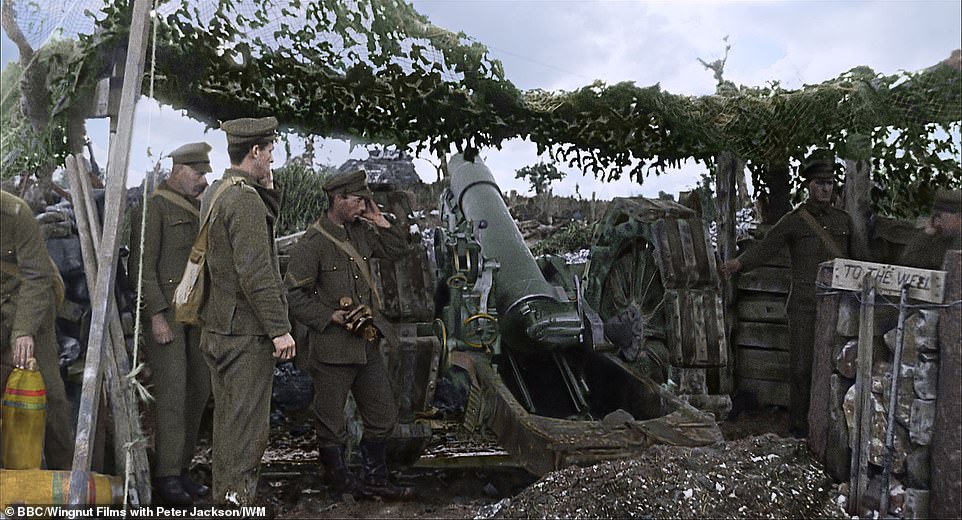 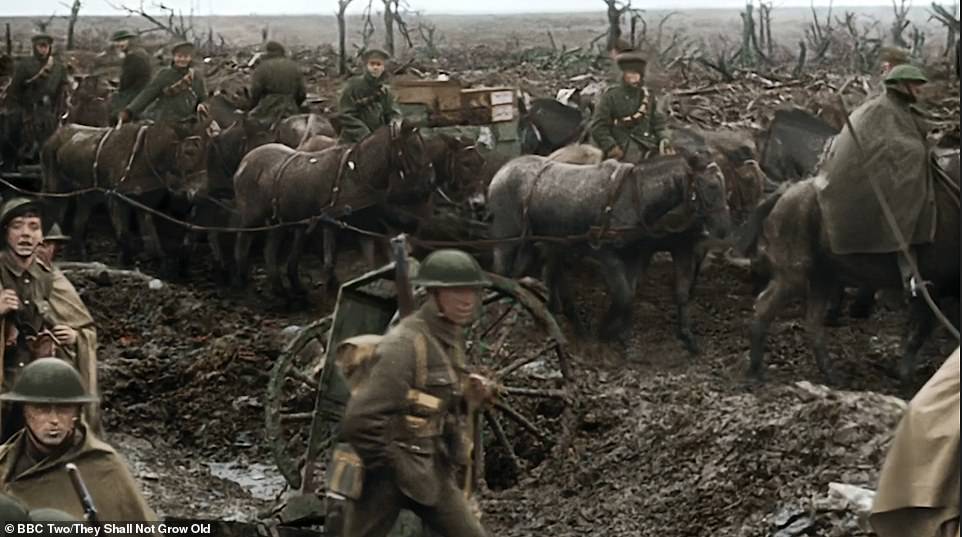 One said: ‘This Peter Jackson [film] is extraordinary. The utter senselessness of WW1 – the dreadful waste of life. I don’t know whether to feel more sorry for those who died or those who survived and had to live with memory of it.’

A third said: ‘No wonder men who made it home, including my grandad, never spoke of their experience.

‘Humbling, horrific and inspirational all at the same time. Thank you to Peter Jackson for bringing this to our screens in this way.’ 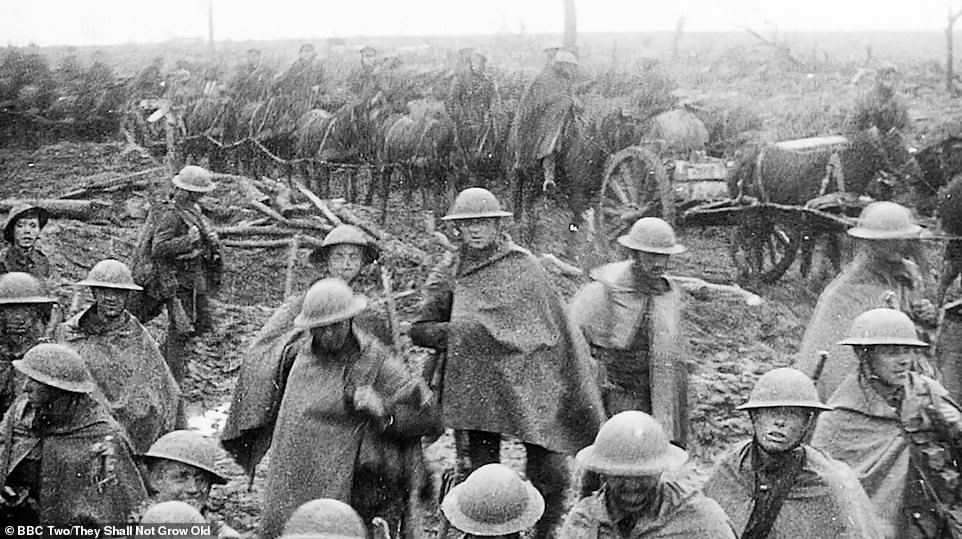 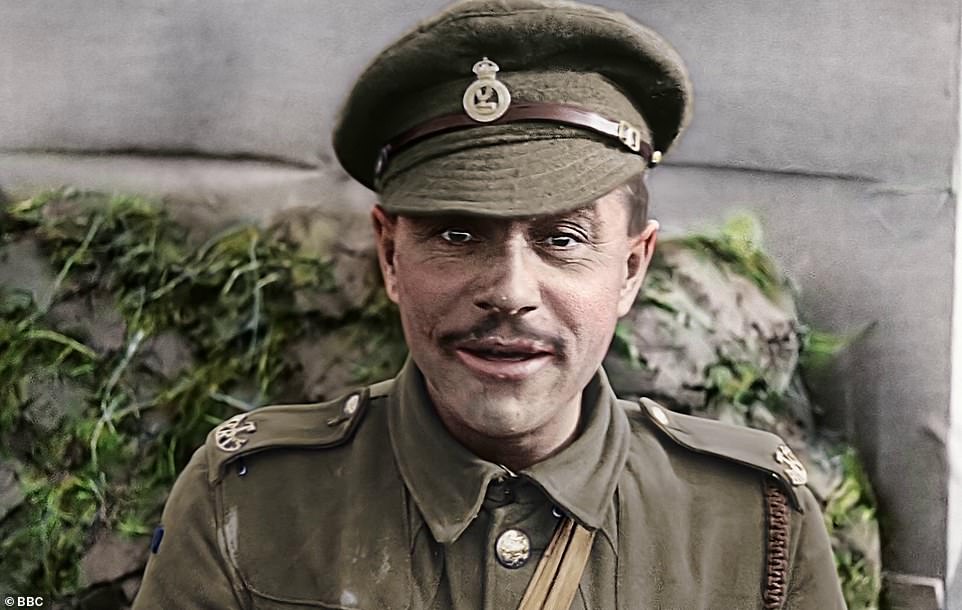 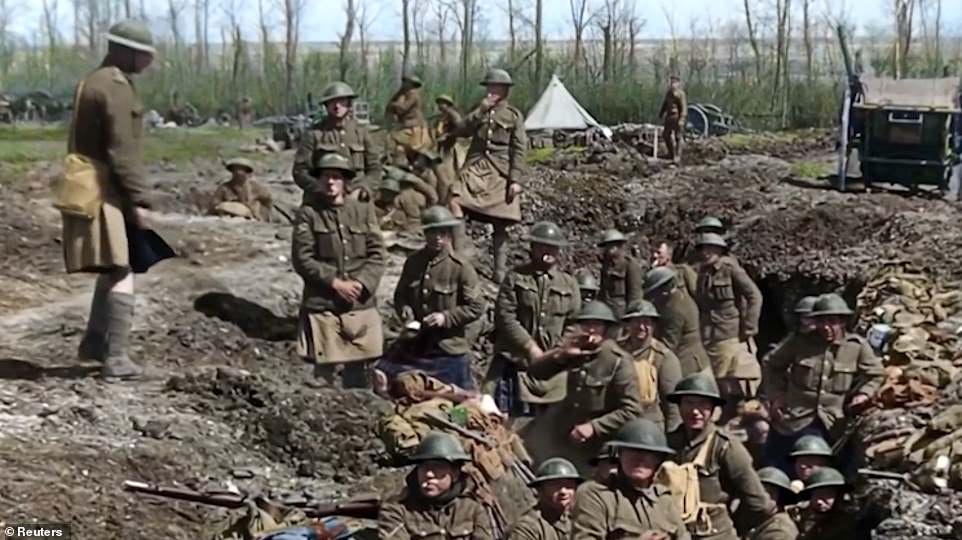 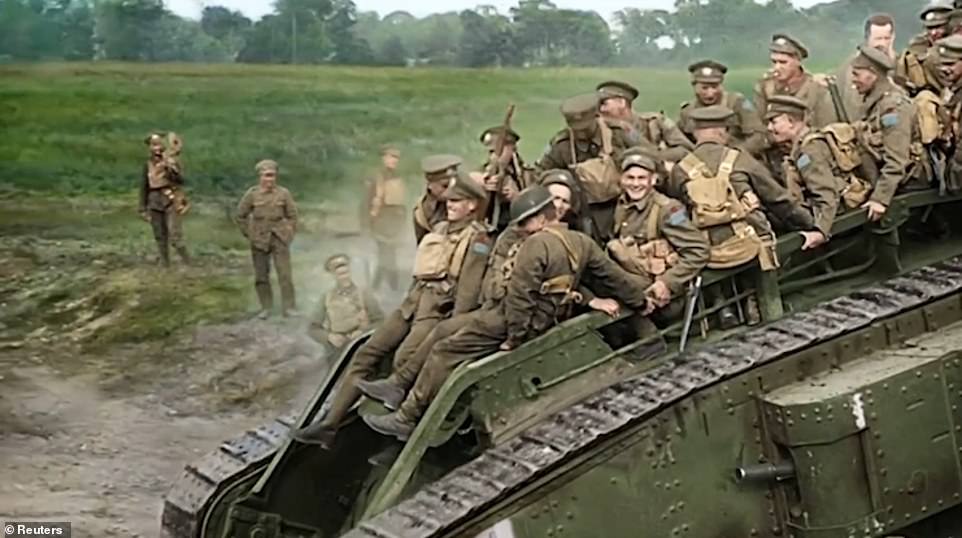 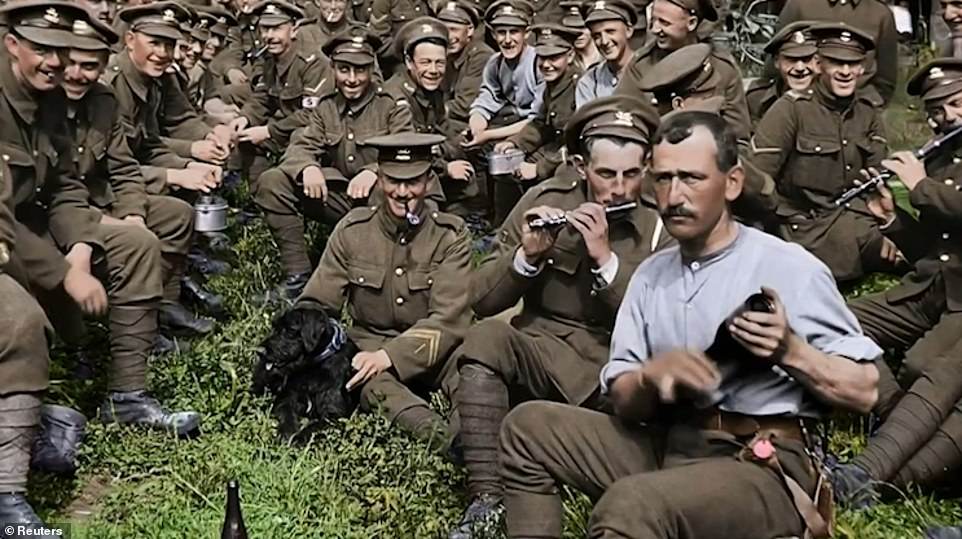 The director previously revealed just how difficult the film was to create.

He admitting to ‘throwing a lot of firepower at the project’, marshalling the equivalent of 7,000 computers and 15,000 people to make the black-and-white footage look as if it was shot in modern times.

His effort and committment to the film clearly went down well, with users hailing his work.

One user wrote:  Peter Jackson’s ‘They Shall Not Grow Old’ making me weep. The sheer humanity of it all’.

Another said: ‘Amazing to watch. Sometimes sickening, sometimes eye-opening. Peter Jackson’s They Shall Not Grow Old on BBC Two is extraordinary.’

Jackson’s film premiered at the BFI Southbank last month and was attended by the Duke and Duchess of Cambridge, before a Q&A session with the director.

Jackson said: ‘I wanted to reach through the fog of time and pull these men into the modern world, so they can regain their humanity once more – rather than be seen only as Charlie Chaplin-type figures in the vintage archive film.

‘There’s been lots of documentaries made on the First World War…and I just decided for this one to strictly just use the voices of the guys that fought there,’ Jackson, director of the ‘Hobbit’ and the ‘Lord of the Rings’ series told Reuters on Tuesday.

Director Peter Jackson used black and white footage from the First World War to create an incredible new film, made to commemorate the end of the war.

He colourised the footage for his film They Shall Not Grow Old and he has earned almost universal acclaim.

Some viewers on social media even called for the New Zealander to be knighted for his efforts. 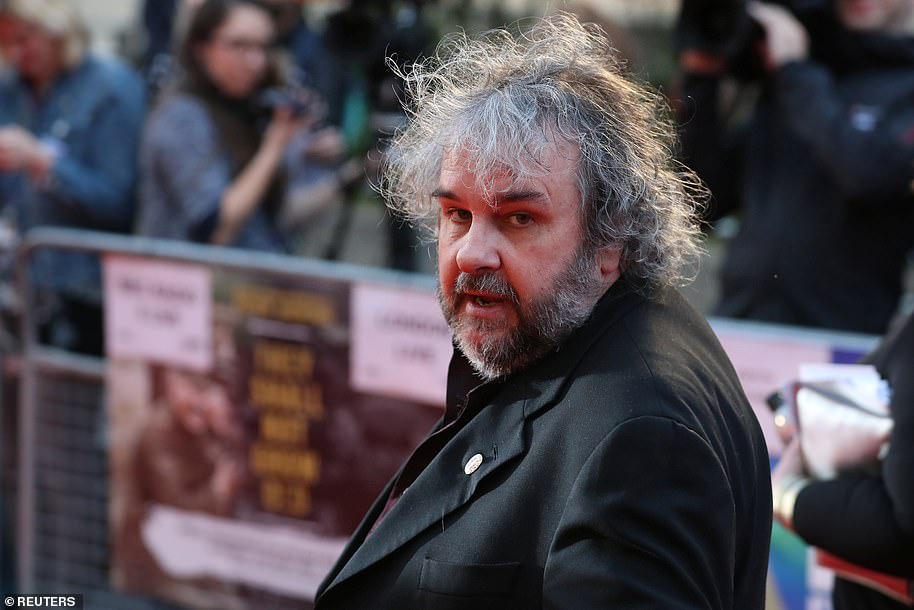 One user wrote: ‘They Shall Not Grow Old is an extremely moving, powerful documentary/film. This should be played to every generation, so they can see the horrors and the spirit of The Great War, all for our freedom.

‘Give Peter Jackson a bloody knighthood!!’

Another wrote: ‘This was the best documentary I have ever seen on WW1. Hope Peter Jackson gets a Knighthood.’

However, the director has already previously been knighted in his native New Zealand.

He was made a Knight Companion of the New Zealand Order of Merit in his home country by the government in 2010. 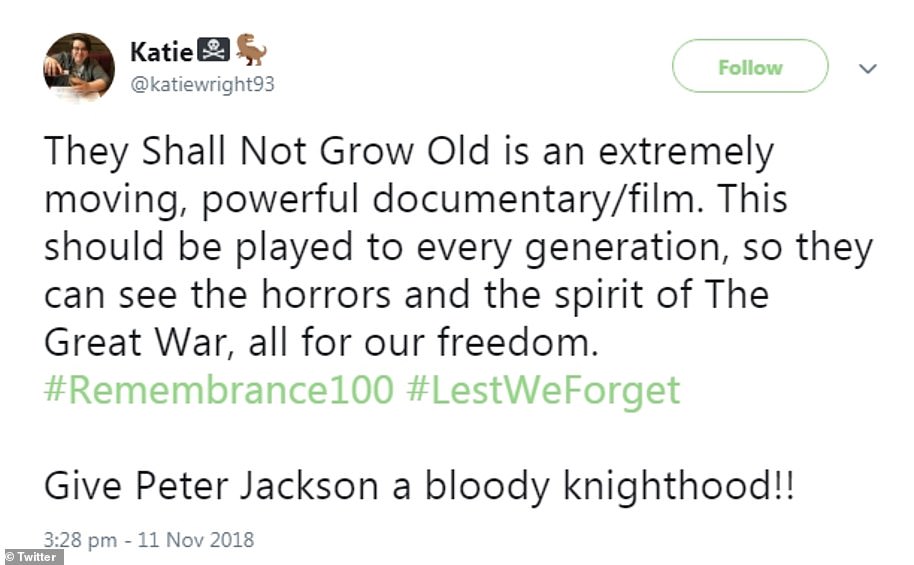