An Ohio county chairman for the Republican Party provoked outrage after posting a Facebook message declaring that the fires devastating parts of California are “God’s punishment” for the “liberal” state.

David Johnson, chairman of the Columbiana County GOP, posted images of the inferno Sunday with the message: “God’s Punishment to Liberal California.” Another message superimposed over a photo read: “Hell on Earth, brought to you by the liberals in California.” 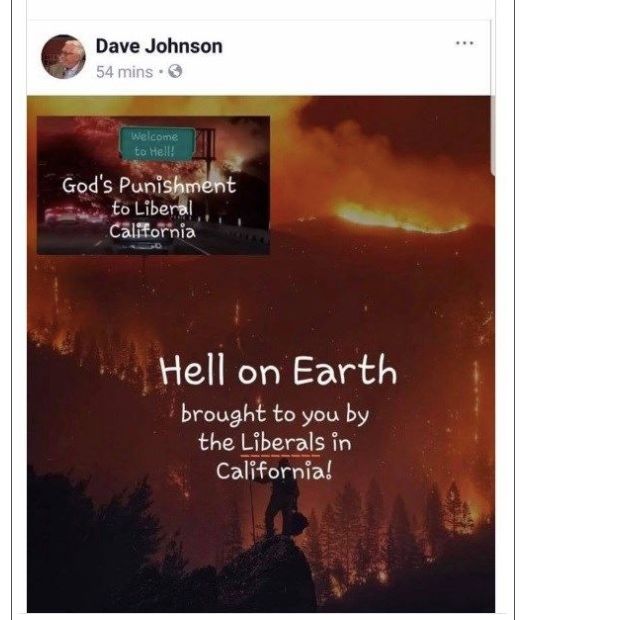 “I would say that Johnson should be ashamed of himself, but as he and the president he worships have proved time and again, they have no shame,” Betras said in a statement. “Johnson owes the victims, their families, and the heroes who fought the fires and participated in rescue efforts an apology.”

After some Facebook comments urged boycotting Johnson’s businesses, he took down his post, but doubled down on the message in a statement to WFMJ-TV.

“California has been overtaken by liberals who have taxed and over-regulated the state,” he said. “There are changes that could have been made which would have helped prevent the deadly fires had there been proper management of forests, but the timber industry is not allowed.”

The comment echoed a tweet from President Donald Trump that the fires were caused by forest “mismanagement” by the state. But fire officials denied that, pointing out that the fires were in a town in northern California (surrounded by a federal forest) and in urban and suburban communities in Los Angeles County.

Johnson meanwhile insisted that his “heart goes out” to people who died in the fires and those who lost homes.

He was a bit more contrite in a statement about his “inartful” message to Cleveland.com: “It’s how I feel about liberals, but did I mean that God is going to punish everyone who lives in California? No. It’s a figure of speech, and I probably shouldn’t have done it. But I did, and it doesn’t change how I feel about what’s happened in California.”

At least 77 people have died and close to 1,000 people are still unaccounted for in the Camp fire in Northern California, and fires have also devastated parts of Southern California.