The battle to replace fossil fuels with low-carbon power is bumping up against a new practical reality.

As people crowd into cities, the world’s need for concentrated power sources is growing just as low-carbon green power is heading in the opposite direction. While the world needs high-density energy — the amount of power used or produced in a given space — low-carbon power sources such as solar, wind and hydro sprawl out over the distant hinterland.

Just as that problem looms, there are growing hints that a long-promised energy solution, nuclear fusion — the low-carbon, high-density, power of the sun — may arrive in time to solve the geographic challenge.

In some ways, the tantalizing prospect of safe and unlimited fusion energy adds to the confusion as the world struggles to move away from high-carbon fossil fuels. Long-term planning would be much easier if we knew how soon the technology would arrive.

Canadian experts say a burst of new technology and new private sector investment mean the commercialization of fusion could be ten or 15 years away. Other estimates have been even more optimistic. 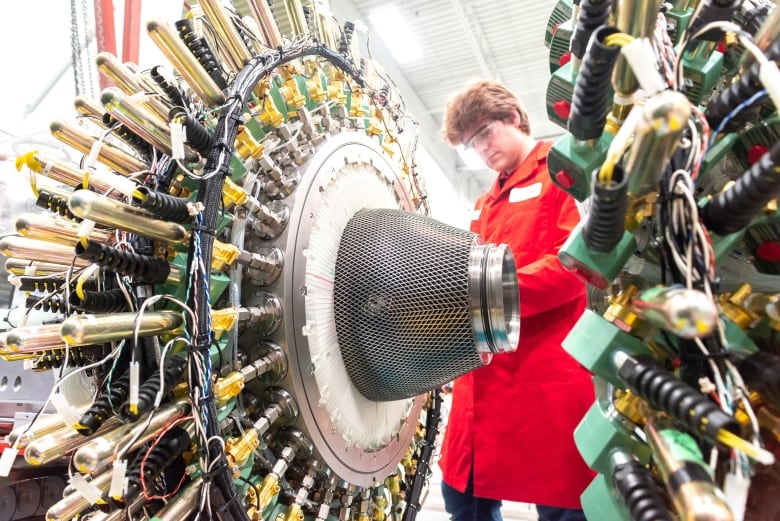 At the Canadian company General Fusion, a precision titanium component made using 3D printing is an example of how new technology is accelerating the fusion energy timeline. (General Fusion)

Nuclear fusion — making energy by forcing hydrogen atoms to merge —  is quite different from the nuclear power we use now at generating stations in Canada and beyond. Current nuclear plants are powered by fission, releasing energy by smashing heavy atoms apart, with a resulting shower of dangerous radiation that must be contained.

In places like Ontario, and countries like France, Hungary and Belgium, nuclear power plants are the backbone of electricity production, delivering vast quantities of reliable, low-carbon energy.

While fission power plants offer a high-density low-carbon alternative to coal and natural gas, their costs are rising to the point where they are no longer practical.

The cost of Fukushima

Following devastating and costly accidents such those at Chernobyl and Fukushima, now estimated in the hundreds of billions of dollars, the expense of constructing safe new nuclear fission plants has become prohibitive.

Just last week, the Japanese company Hitachi walked away from a plant under construction in Britain, writing off their investment of nearly $3 billion US.

“I was not prepared to ask the taxpayer to take on a larger share of the equity, as that would have meant taxpayers taking on the majority of construction risk,” said British Energy Secretary Greg Clark. 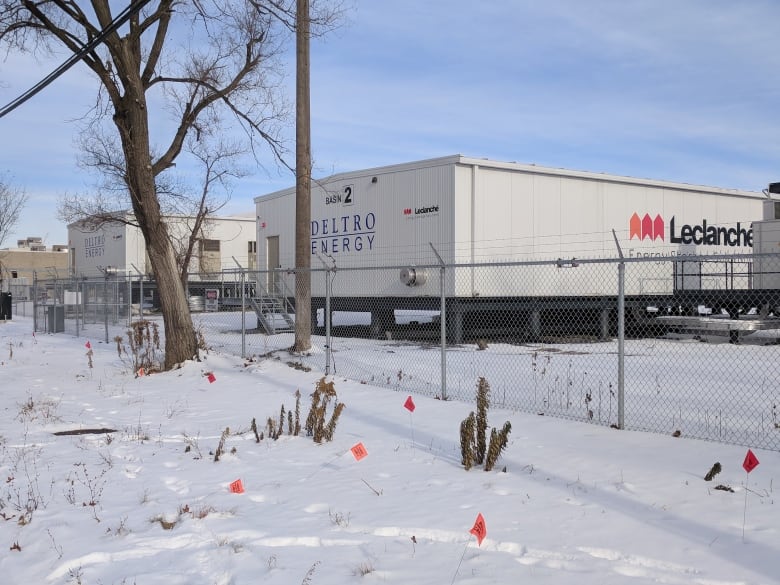 Giant batteries in the centre of Toronto now plugged into the grid are an example of how low-density power could be accumulated in high density areas of demand. (Don Pittis/CBC)

One difficulty for governments and utilities is that the complete cost of building, upgrading and waste storage for conventional nuclear plants continues to soar. Meanwhile, the cost of green power, especially wind, has plunged well below the price of even conventional fossil fuel power plants.

The problem, says Hoicka, who is currently writing a contribution on energy infrastructure for the forthcoming Oxford Handbook of Energy Politics, is one of energy density.

“If we do a shift toward renewables and away from thermal technologies … the density of supply would reduce.”

As well as industrializing rural landscapes that many people object to, Hoicka says converting to an all-renewable energy supply will require a rebuilding of our energy network. Such plans could include giant batteries to store power close to where it is needed or pricing systems to encourage urban roof-top solar.

But Hoicka says such a rebuilding is path-dependent, a technical term that means future plans depend on what we have built in the past.

That is why the sudden and unexpected arrival of nuclear fusion would be disruptive, not only for fossil fuels, but also for the systems we are building to replace them. 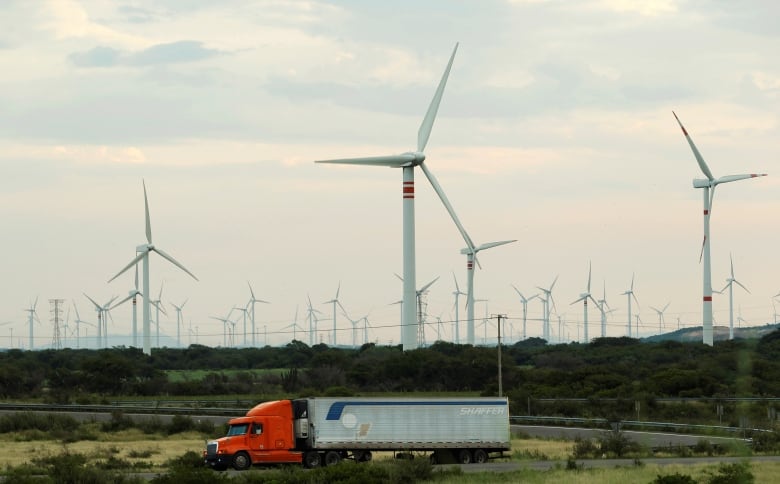 Wind power has become a cheap source of electricity, but it’s mostly produced far from where power is needed. (Jorge Luis/Reuters)

Mike Delage, chief technology officer at General Fusion, a privately held company based in Burnaby, B.C., and a global star in private sector fusion, thinks commercial fusion could be as little as a decade away.

And one of the reasons is the number of private sector start-ups getting into a sector once reserved — like space exploration —  for governments with deep pockets.

Such young start-ups include Commonwealth Fusion Systems at MIT, founded last spring with $50 million US in startup money from the Italian energy giant ENI.

Delage says start-ups are using innovative ideas based on science accumulated by government research projects and brand new technologies such as 3D printing and massive computing power, to accelerate development of an affordable power source he is convinced is inevitable.

“If you have the knowledge to build a power plant, you can build it anywhere,” says Delage. “You can put it closer to the centres of demand.”

Once it arrives, fusion power sounds like a perfect plan to solve the problem Christina Hoicka has identified. 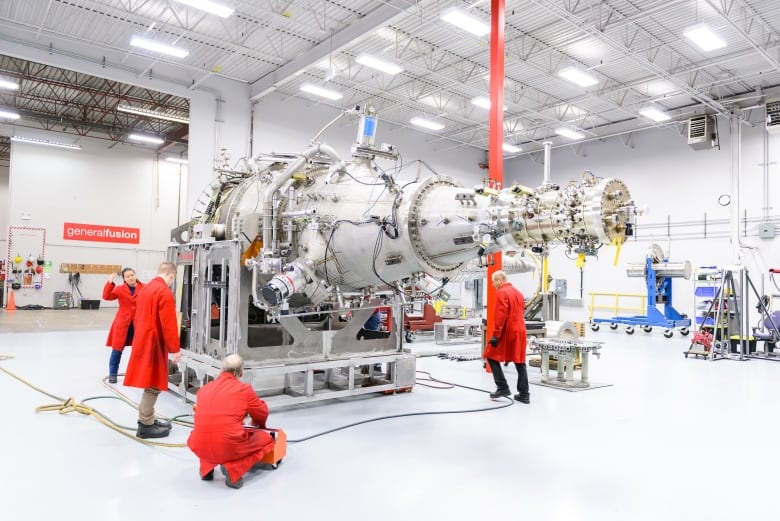 General Fusion’s giant plasma injector is used to shoot super-heated gas into a compression chamber for ignition. The Canadian company has an even newer version of the injector that’s ten times more powerful. (General Fusion)

That said, other experts, while agreeing that commercial fusion is coming, have pushed the year out to 2050 — a date 30 years away or the perpetually-offered timeline for a technology that never seems to arrive.

Whether fusion arrives in five, 10 or 30 years, inevitably it will disrupt the fossil fuels industry, conventional nuclear and even renewable power, says Allan Offenberger, an Alberta-based physicist who has advised governments around the world.

In any case, he says, that’s too long to wait. The switch to renewables must go ahead. Fossil fuels, while much reduced, will still be needed, and nuclear fission power is still essential as an interim energy source.

“We can’t get fusion plants up fast enough to phase out greenhouse gases overnight,” says Offenberger.

“We’ve got to go through that phase-in to where fusion will become the main energy source, and it will in the long run, in this century.”