The NDP’s Sheila Malcolmson has won a critical byelection in Nanaimo, B.C., maintaining the party’s delicate hold on power in the province.

Malcolmson, a former federal NDP MP, will replace Leonard Krog, the five-term NDP member of the legislature who resigned his seat last year after being elected mayor of Nanaimo.

The results of the byelection on Vancouver Island maintain the status quo, with the opposition Liberals holding 42 seats, just shy of the 43 held jointly by the NDP and the Green Party.

The Greens agreed to support the NDP after the provincial election of 2017, allowing them to form a minority government. 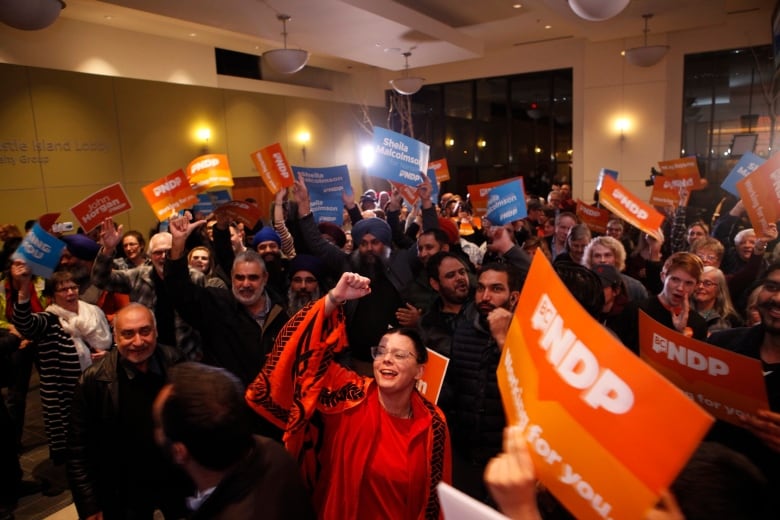 The NDP has held the riding, where there are 45,359 registered voters, for 13 of the last 15 elections. The January vote means the winner will sit in the legislature for the winter session and the provincial budget, which will be announced in February.

Standing next to B.C. Premier John Horgan in Nanaimo just before 10 p.m. PT, Malcolmson addressed her supporters, and thanked her campaign volunteers and voters.

“This is a victory for Nanaimo,” she said, to cheers from the crowd.

“​Nanaimo is not election fatigued, as it turns out,” she said, adding “we’ve got a lot of work to do.”

The NDP’s Sheila Malcolmson addresses her supporters after winning a byelection in Nanaimo, B.C. 1:00

She touted the B.C. NDP’s priorities, including protecting B.C.’s coast from oil tankers, increasing the number of doctors in the province, and improving access to childcare.

“We are ratcheting down climate change emissions in the most ambitious program North America has, and we are generating green jobs while doing it,” she said.

“We have the strongest economy in the country right now but we have to make sure that economy is shared by everyone.”

Malcolmson was elected in the federal Nanaimo-Ladysmith riding in 2015. She announced she’d be vacating her federal seat in Oct. 2018 to run in the byelection.

Standing next to BC Liberal leader Andrew Wilkinson, Harris thanked his campaign workers and said “this wasn’t a process I ever thought I’d go down, but I’m glad that I did.”

“When we got in this thing, people said we’ve got no shot. It’s Nanaimo,” he said, calling the community the “love of his life.”

In a statement sent on behalf of the BC Greens, Ney congratulated Malcolmson, writing “tonight’s results speak to voters’ desire to see the government continue in partnership with the BC Greens.”

BC Green party leader Andrew Weaver wrote that “while disappointing, tonight’s results were not unexpected, given the conversations we have had with Green voters over the past few weeks.”

“I can say with absolute certainty that our support exceeds the votes cast for the party today.”

Around 1,000 absentee ballots will be counted next week.