Forget the Falls, the Niagara Region has a new tourist attraction and it’s here for a limited time only.

Towering piles of ice tossed over barriers and walls by Sunday’s waves and winds gusting over 100 km/h are drawing the curious and selfie-seekers alike to Fort Erie, Ont.

“It just kept flowing over. In some places the ice is 10, 20, 30-feet high,” said David Adames with the Niagara Parks Commission. The ice wall has prompted the closure of a portion of the Niagara Parkway.

Videos showing hunks and chunks of ice seeming to climb over each other exploded across social media during Sunday’s windstorm, with some commenting the movement almost made it look as though the frozen water was alive or even spawning some sort of ice monster.

What the video doesn’t show, says Adames, is just how massive some of these blocks are.

“One staff member described some pieces as large as a car,” he said. “These are very large pieces of ice.”

Stay back for your own safety

So while the frosty spectacle has awed locals and visitors alike, the parks commission is asking people to keep their distance so they don’t get hurt.

“We did see at least one or two individuals trying to climb the ice,” said Adames.

“It’s good to watch from afar and take pictures. But we do not want anyone risking climbing on the ice, it’s very much moving.”

That movement has already caused miniature avalanches from the icy mountains, sending big blocks sliding and skittering across sidewalks.

Traffic on the south Niagara Parkway, particularly near the Mather Arch in town, is being re-routed as a portion of the road is closed between Central Avenue and Queen Street. 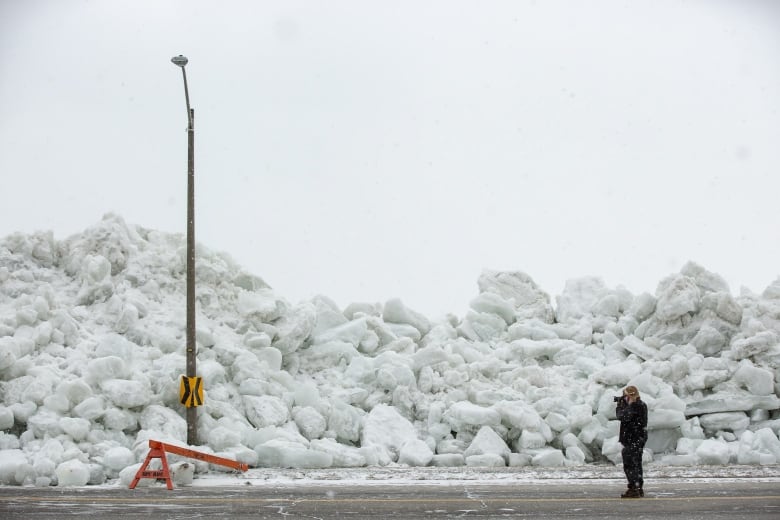 Adames says the ice could stick around until the late spring or early summer. (Tara Walton/Canadian Press)

Adames said so far the ice stayed off the parkway, but the commission isn’t taking chances.

“You never know. If water shifts or ice starts to shift, we want to take all precautions.”

Piles could be here until summer

With more snow in the forecast, and weeks of cold weather still ahead, staff are weighing their options for ways to remove the frigid rubble.

Safety for work crews is top of mind, said Adames, so it may turn out there’s nothing they can do. 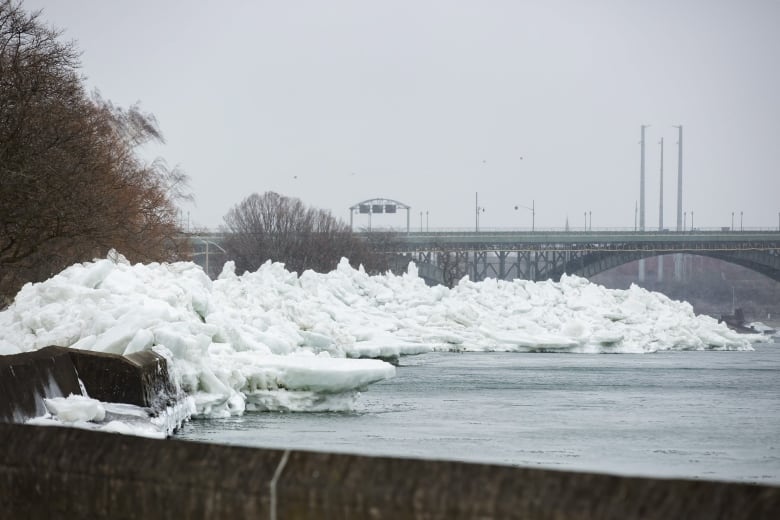 David Adames from the Niagara Parks Commission says some of the ice chunks are the size of a car or fridge and could pose a danger to anyone trying to clamber over them. (Tara Walton/Canadian Press)

In that case, Adames said the commission will leave the cleanup to Mother Nature, meaning the icy attraction could be sticking around until it melts — and that could take months.

“Staff who work in Old Fort Erie tell me in late May early June it can still be significantly cooler down there because of the water temperature off Lake Erie, so the ice could stay there quite a while.”

Putin thanks Trump for stopping terrorism in Russia

Thunbergs father: Greta is happy, but I worry