Mother-of-one Sarah Hood, 53, has suffered with ‘intense burning pain’ after the bites

A mother-of-one claims to have been bitten ten times by a false widow spider after it became trapped inside her jeans that were hung outside to dry.

Sarah Hood has suffered with ‘intense burning pain’ and endured three hospital stays after she believes she was bitten by the spider in November last year.

Ms Hood, 53, known as Nikki to friends and family, was bitten whilst dining at the Amwell Tandoori Indian restaurant in Ware, near her home in Hertford.

She has recalled the terror of realising how it had been trapped between her jeans and her skin for up to an hour.

Ms Hood was bitten after fetching her jeans in off the washing line and getting changed in a hurry to go out for dinner.

Ever since the day she was bitten, NHS doctors have struggled to cure the bites, which have violently flared up twice in the past year. Each time the bites flare up, Ms Hood finds herself in ‘agonising’ pain and requiring urgent medical care.

The nanny has even been ‘turned away’ from a tropical disease walk in centre because she was bitten in Britain.

Ms Hood said the spider, with a large ‘bulbous’ body, wriggled free from her trousers and crawled onto the table – but she flicked it off with a menu and felt no pain. 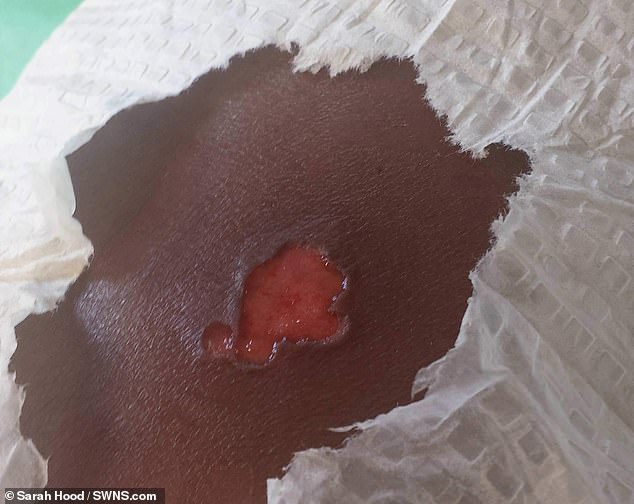 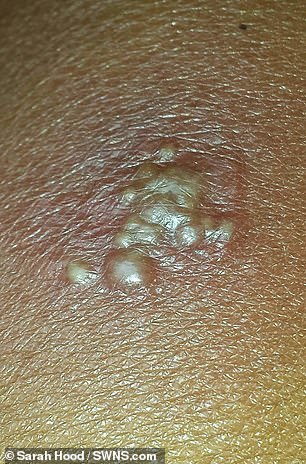 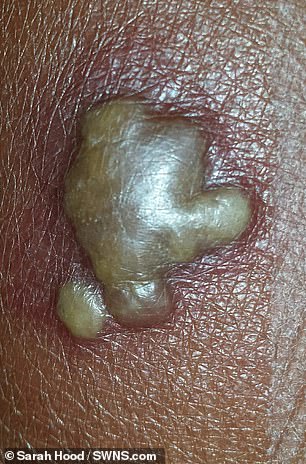 Ever since the day she was bitten last November, NHS doctors have struggled to cure the bites

She added: ‘I saw it crawl on to the table out of the corner of my eye. I thought it was weird because it’s not every day you see a spider like that.’

Even for hours after she was bitten, Ms Hood said she felt no pain and only noticed the ten ‘prominent puncture marks’ on her leg later that night before going to bed.

However over the course of the next two days, the bites became ‘massively infected’ and intensely painful. She said it felt like she was being burned by ‘boiling hot water’.

Ms Hood said the ‘intense heat’ has left her unable to sleep at night and needing to take time off work.

She has spent around ten days in hospital over three separate occasions after the bites have flared up with aggressive infections. 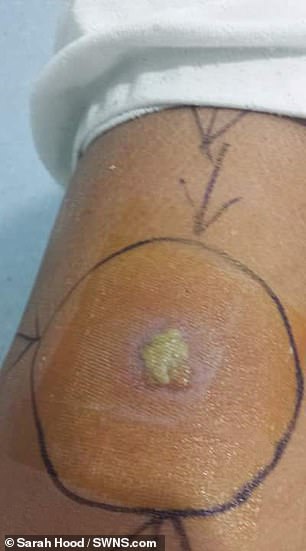 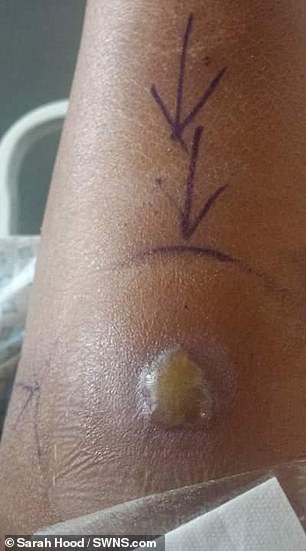 Ms Hood’s spider bites are pictured in November 2017, shortly after they first appeared 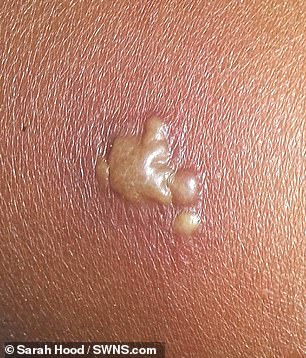 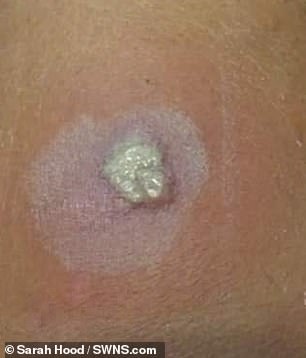 In November 2017, she was placed on a course of antibiotics by her GP to treat the initial bites, but recalled how the bites ‘burned like a red hot pan’.

Millions of false widows, Britain’s most venomous spider, have been found across the UK and the population is believed to be growing. 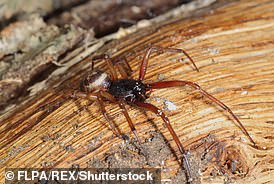 The species has a brown bulbous abdomen with cream markings that look like a skull. They have long legs and can reach about 15mm in size.

Also known as steatoda nobilis, the spider is frequently confused for the black widow, which has deadly venom.

The false widow was first spotted in the UK in Torquay in 1879, and it is thought that it may have made its way to these shores from Madeira or the Canary Islands in a shipment of bananas.

The Natural History Museum says that warmer summers mean the spider is spreading northwards through the UK, having previously been found mainly in southern England.

IF YOU GET BITTEN…

The first thing you should do is wash the area thoroughly with soap and water to prevent infection – and don’t scratch, as if you break the skin there’s more chance for bacteria to get in.

Cover bites with a plaster and apply an antihistamine sting cream to calm any inflammation or itching. Any redness, pain or swelling should subside after three days.

Be alert to potential signs of infection, such as weeping blisters or painful swelling, that continue to get worse after a few days. If this happens, seek advice from your GP.

She said: ‘It feels like a deep tissue burn but only looked like a nettle sting.It was excruciating when anything touched it. It got super infected over a matter of days.’

It was five days after she was bitten that Ms Hood required hospital treatment after finding the pain unbearable.

She attended Lister Hospital’s A&E and was later admitted to a ward. Doctors ‘de-roofed’ the bites and drained the infection, but she said the pain was ‘hard to take’.

Ms Hood said: ‘The pain was intolerable. I couldn’t sleep at night and could only wear loose clothes. I was very upset over it.

‘The pain was getting worse and it would wake me up at night. The wounds did heal and you couldn’t tell that it ever happened. I thought that would be that.’

But to Ms Hood’s disbelief, the bites would flare up with a violent infection a further two times, first in February this year and again in September.

Each time the infection came back it would be ‘twice as painful’.

In February Ms Hood spent four days in Lister Hospital after a ‘cluster of green mass’ flared up where she was bitten.

Her leg became swollen and she developed flu-like symptoms. Once again, doctors drained the infection and as before, the wound healed and she made a full recovery.

However, on September 2 her bites flared up for a third time.

She went back to Lister Hospital’s A&E and spent another two nights on a ward. Doctors de-roofed the bites for a third time and she needed yet more antibiotics.

But doctors said they could do nothing more and called London’s Hospital for Tropical Diseases in a bid to get her specialist care.

However she says she was ‘turned away’ because she had been bitten by the venomous spider in the UK.

The walk-in centre is dedicated to travellers who have returned from the tropics within the last six months, and she is now facing waiting weeks for an appointment.

Ms Hood, who for many years lived on America’s east coast said: ‘They told me that because I hadn’t been to the tropics that I couldn’t be seen to. 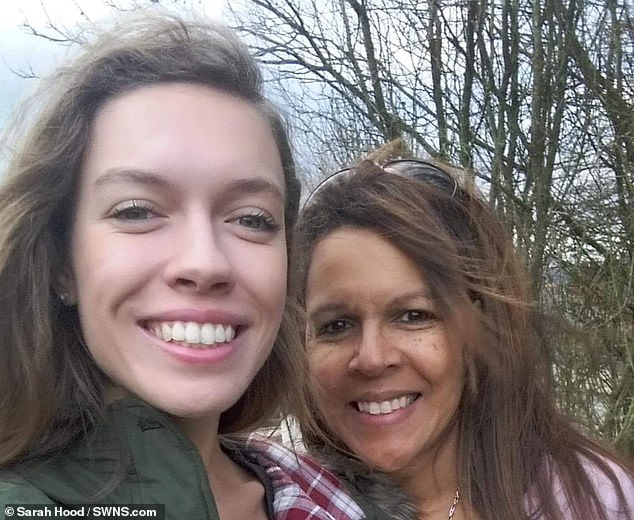 Ms Hood, pictured with her daughter Rebecca, said the ordeal has been ‘horrendous’ for her

‘I was told to go back to my GP as my GP needed to request an urgent appointment. I am still waiting for this appointment and I can do nothing but wait.

‘It seems no one knows where to send me, as I am being bounced from hospital to GP to hospital. I’ve been passed from pillar to post.

‘There just doesn’t seem to be anyone who can help me. Every time I’ve been to hospital, they’ve done their best but it won’t go away.

‘I want answers and I want it dealt with. I just want it gone. It’s been horrendous for me. I want to be able to lead a normal life again.’

‘I’m living on the edge, just waiting for it to come back. Each time it gets worse. I’m scared that I’ll lose my leg. It has been horrendous for me. 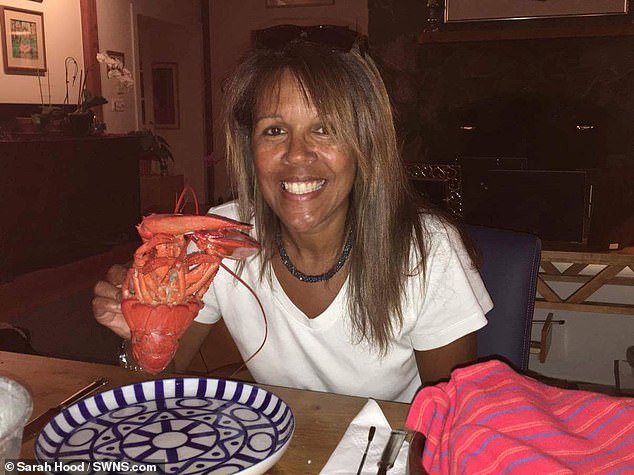 ‘It’s hard for anyone else to imagine the pain. My whole thigh is on fire. I absolutely detest spiders. I have nightmares about them now.’

Ms Hood is due to fly out to New York in two weeks’ time but said she was ‘petrified’ that another flare up is just around the corner.

She said she was struggling to sleep at night due to the pain and feared there is ‘no treatment in sight’ for the aggressive bites.

Ms Hood added: ‘I just want to live a normal life again. I just want this gone. I’ve got scars on my leg and feel like the pain is just waiting to come back.’

Over the past month an infestation of venomous false widow spiders has forced the closure of several schools in London – some for almost a month.