This is the horrifying moment a mother films a ‘giant’ rat scuttling around her council flat, where she claims to have been living with giant rodents and maggots for a decade.

Michele Smith, 42, says she is now at ‘rock bottom’ after years of living with the repulsive creatures and is thinking of declaring her family homeless to escape the horror.

Desperate to show others what she is going through, the mother-of-five set up a camera to film one of the giant rodents scuttling about her kitchen. 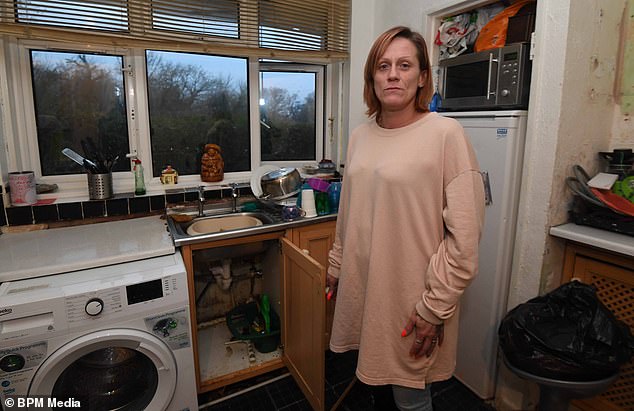 Michele Smith (pictured), 42 and from Birmingham, claims the stress of the conditions in her three-bedroom council house has left her with heart failure 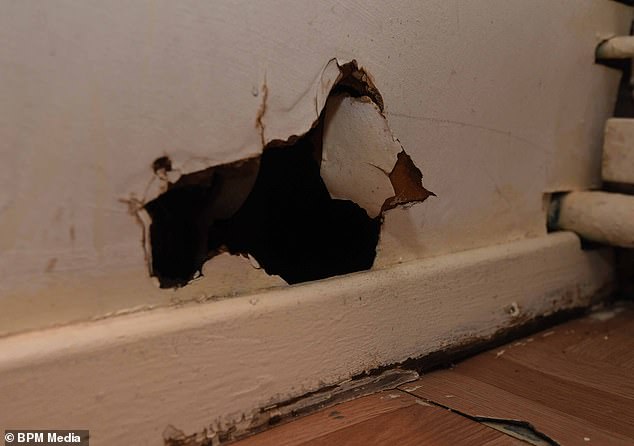 The rodents have gnawed holes in the property, including in the family bathtub. As a result the family has been forced to shower at their local swimming pool’s facilities instead – which costs £10 per trip

She said: ‘Now the kitchen is completely out of bounds, I just can’t go in there knowing rats are in there.

‘One time a rat was just sat in the middle of the kitchen, another one was sat on my toaster then I found one in my sunbed.

‘Now we’ve barricaded our house; our windows are constantly locked because of it – it’s almost prison-like.’

In the shock video, a giant rat can be seen sniffing at various items on the kitchen floor including a broom and clothes.

Each time it is startled, it quickly scurries away under one of the kitchen cabinets.

Michelle claims the stress of the conditions in her three-bedroom council house has left her with heart failure which meant she was hospitalised two weeks ago.

She also claims her pet staffie Remi died aged two because of the rat bait she has been forced to strew around her house. 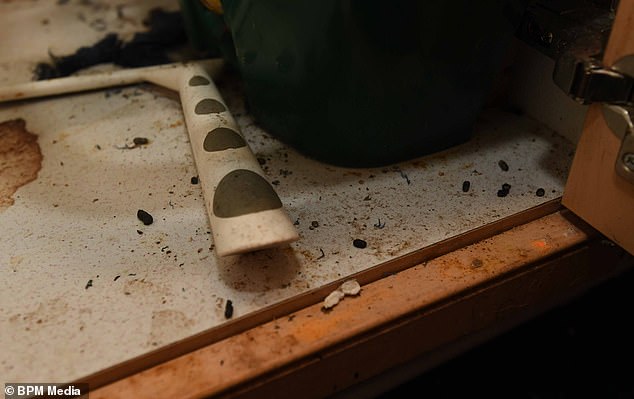 And the mum said the rodents have gnawed a huge hole in the family’s bathtub – meaning since August this year they have been forced to shower at their local swimming pool’s facilities instead – which costs £10 per trip.

Michelle, who moved into the property in 2005, said: ‘I had heart failure two weeks ago because of it and I was in hospital for ten days, I had my heart restarted three times.

‘I’ve had countless infections, one which took five lots of antibiotics to get rid of it. My doctor is even thinking of putting me on lifelong antibiotics because of infections.

‘They’ve sent people out multiple times, but nothing has happened.

‘They haven’t contacted me since August this year, and they’ve lied by saying our first contact was in 2017, it’s been at least five years.

‘Our American staffie Remi died at the age of two because of the bait they left lying around, we’ve got a chihuahua now and it’ll die if it comes across the bait.’ 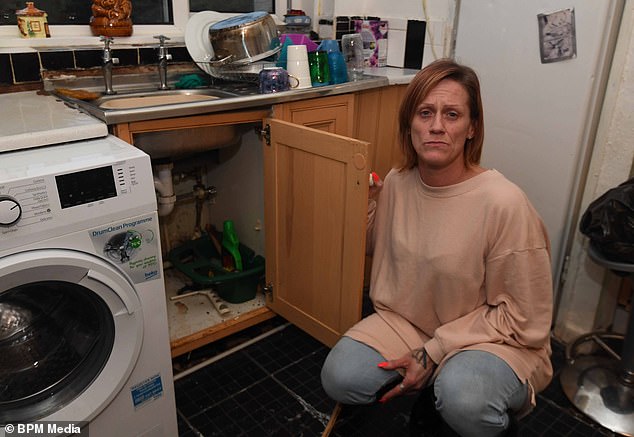 In shock footage captured by Ms Smith, a rat is seen scuttling under the kitchen cabinets (pictured) after sniffing around at clothes and a broom

She also claims her local council has ‘abandoned’ her since the home invasion began five years ago and said despite numerous visits by environmental officers nothing practical has been done.

She said: ‘I’m at rock bottom, we’re too scared to go into the rooms because it’s so bad.

‘It’s disgusting and makes you sick – we shouldn’t live like this. I’ve stood on a headless rat in the kitchen before, with my bare feet.’

Michelle said the infestations have also impacted on her social life, as she alleges people no longer visit her home. 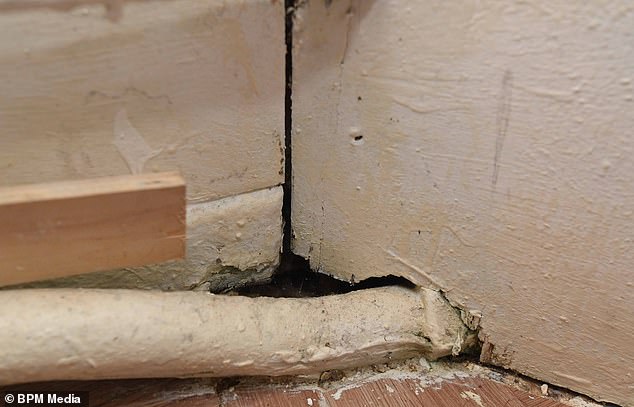 There are several holes in the property, which Ms Smith claims the rats crawl through and access the kitchen

Michelle added: ‘My two eldest don’t even bring my grandchildren over now, I have to go and visit them and travel.

‘It’s embarrassing – people don’t even want to eat at my house anymore, but we’re not dirty people.

‘I’m a constant bag of nerves, the council have told me to go and stay with family, but I don’t have any.

‘We’ve asked to be moved into temporary accommodation, but they just ignored the request.’

‘We will be carrying out works to seal entry points to the property’s drains as well as fitting a gully grid.’