Bill Morneau’s latest economic update is a total write-off. Which is exactly what he intended.

The finance minister responded to Donald Trump’s corporate tax changes, introduced last December, by announcing Canadian businesses will be able to deduct, immediately, the full cost of any investments in new equipment for manufacturing and clean technology.

It’s at least part of what companies in this country have been demanding ever since the U.S. president rolled out massive corporate tax cuts dropping the rate from 35 per cent to 21 per cent — in the process, effectively eliminating Canada’s tax advantage.

Morneau isn’t reducing corporate rates here, saying that would cost the government too much.

Instead, he’s giving Canadian business access to billions of dollars in new federal revenues as an incentive to expand and invest in this country, arguing it’s the right policy despite the $17.6 billion price tag and the swelling budget deficit.

“The economy is doing better than most Canadians would have thought,” Morneau told CBC News. “So seventeen and a half billion dollars to grow the economy is pretty significant. The commitment is to create jobs, to invest for the future.”

So far, the Trump tax cuts appear to have been used mostly to reward shareholders with higher dividends instead of creating jobs. These investment write-offs require that the money be spent to improve productivity, generating employment as a result.

The real question is why Morneau is prepared to take the federal government even deeper into debt to accomplish this feat.

‘Neither a rational response nor a responsible one’

At three per cent, Canada’s economic growth in 2017 led all the G7 countries. The forecast for the next five years isn’t quite as rosy, but it’s still robust. Job creation is up. Wages are also going up at their fastest pace in nearly a decade, contributing to strong growth in income tax revenues.

And when it’s compared to the $1.5 trillion deficit being run by the Trump administration, Canada’s deficit looks like peanuts — even though it breaks the Liberals’ campaign promise in 2015 to limit deficits to $10 billion in each of the first three years, and to return to balance in 2019.

“We could have ignored the concerns of business leaders, decided not to make the investments and the changes that are part of the fall economic statement, and we would have had a lower deficit as a result,” Morneau said in his speech to the Commons.

“To do so would be neither a rational response nor a responsible one. We know that if we give Canadian businesses more opportunities to succeed and grow, they will do just that.” 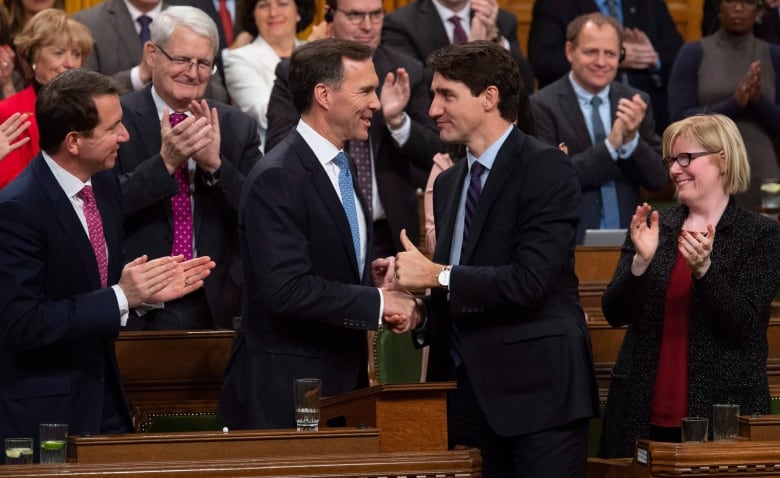 Still, Morneau’s update signals a dramatic shift in this government’s focus a year out from an election.

Instead of continuing with tax cuts and programs such as the Canada Child Benefit targeted directly at middle class taxpayers, Morneau is reaching out to a business community that has been wary of the Liberals’ deficit financing, unhappy with its changes to small business tax rates and worried that the Trump’s reforms would make them less competitive.

“We’re deficit-financing the corporate sector,” said Kevin Page, the former parliamentary budget officer who now heads the Centre for Fiscal Studies and Democracy at the University of Ottawa.

“This is a financial statement that responds to the business community,”

Just look at the numbers. Of the $17.6 billion dollars in new measures over six years announced in the update, $14.4 billion goes to the tax changes for business. Throw in a few other measures for innovation and helping industries expand into overseas markets and the sum earmarked for businesses rises to $16.5 billion.

The rest of the new spending — $1.1 billion — goes to tax credits for local journalism, a social finance fund and implementing pay equity in federally-regulated workplaces.

Morneau’s plan is not without risks. The price for Canadian oil is well below world prices. Interest rates are expected to rise at some point.

Page notes that the fastest growing federal expenditure this year and next will be the cost of servicing the existing debt. And yet there’s no date to return to budget balance. There’s no indication that, despite the buoyant Canadian economy, the Liberals feel any need to start winding down stimulus.

Conservatives spent much of the lead-up to Wednesday’s economic update demanding to know when the budget would be balanced.

Pierre Poilievre, the party’s finance critic, said Morneau’s plan added “almost a million to our national debt”  in the half hour it took to deliver his speech.

“And we know Canadians will get the bill.”

New Democrats, meanwhile, would have spent the money being directed to corporations on providing (for example) a national pharmacare plan.

The Liberals can still do that. There’s another budget between now and when Canadians go to the polls. More money that can be spent if — and this is a big if — the economy continues its strong performance.

But for now, the Liberals are content with helping Canadian businesses. The hope is that it will lead to more economic growth, and more jobs.

If it doesn’t, it will be an expensive write-off for the Liberals … just as they’re about to ask taxpayers for another four years in office.