More than 20 child murderers have been transferred to Indigenous healing lodges since 2011, according to numbers from Public Safety Canada.

At least 14 of those offenders were held in healing lodges while the previous Conservative government was in power.

The federal government released those numbers to CBC News Network’s Power & Politics in the wake of a wave of outrage over child killer Terri-Lynne McClintic’s transfer to an Indigenous healing lodge in southern Saskatchewan last December.

She was transferred back to a traditional prison in Edmonton last week.

McClintic is serving a life sentence for the brutal rape and murder of Tori Stafford, 8, of Woodstock, Ont.

News of McClintic’s transfer to a healing lodge became public in September and quickly became a point of heated political debate in the House of Commons. The Conservatives tabled a motion, later voted down, that demanded the Liberal government condemn the transfer and overturn it. Prime Minister Justin Trudeau, in response, accused the Official Opposition of being “ambulance chasers.”

Prime Minister Justin Trudeau accused the Conservatives of being “ambulance chasing politicians” for the manner in which the party is using the case of Tori Stafford’s killer being transferred to a healing lodge during question period in the House of Commons. 1:07

In a statement to CBC News, a spokesperson for the Minister of Public Safety Ralph Goodale said child killers were sent to healing lodges under the Conservative government of Stephen Harper as well.

McClintic’s case was not unique 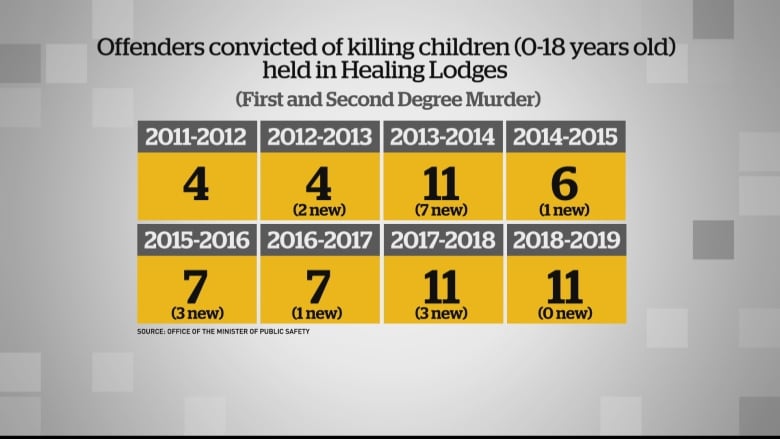 There are currently 11 offenders convicted of first or second degree murder of minors held in healing lodges, according to the Office of the Minister of Public Safety. (CBC )

Between the fiscal years 2011-12 and 2014-15 — when Conservatives Vic Toews and Steven Blaney were ministers of public safety — 10 new offenders were sent to healing lodges.

CBC News asked if the Conservative Party disputed the numbers; Brock Harrison, a spokesperson for Conservative Leader Andrew Scheer, did not address the question directly.

“Individual correctional transfers often only become known if a family member or someone connected to the case makes it public,” said Harrison in a statement.

“Our Conservative government also acted swiftly whenever these types of bad decisions in the criminal justice system became known.”

Harrison said he couldn’t cite instances of Conservative ministers reversing the transfer of a child-killer to a healing lodge — but he did point to the former Harper government acting to prevent serial child killer Clifford Olson from collecting social security benefits, and to end conjugal visits for serial murderer Paul Bernardo.

Harrison also took issue with the time it took for McClintic to be transferred back to a conventional prison.

“They had the power and the duty to act, and they failed to do so for weeks,” he said.

In an interview last week with Power & Politics host Vassy Kapelos, Karen McCrimmon, parliamentary secretary to Goodale, criticized the Conservatives for not addressing the issue of healing lodge transfers during their time in power.

‘They had 10 years to fix it and they didn’t,’ says the parliamentary secretary to the Public Safety Minister. 0:32

Goodale has said he has no legal power to intervene in individual cases, and that decisions about correctional and security classifications are made by public servants based on what is considered best for the offender’s rehabilitation and for public safety.

Last week, Goodale announced stricter transfer policies for Indigenous healing lodges for women. Under the new policy, transfers will have to be authorized by Correctional Service Canada’s deputy commissioner for women, who will be required to ensure that Indigenous communities are engaged in transfer recommendations.

McClintic is not eligible for parole until 2031.