The youngest victim of the terrorist attack at London Bridge had ‘no chance’ to escape before she was stabbed to death by Jihadists, an inquest heard today.

Australian au pair Sara Zelenak, 21, had met up for drinks with her friend Priscila Goncalves near London Bridge before terrorists killed her and seven others on June 3 2017.

After sheltering from the rain at a bar called London Grind at 2 London Bridge they heard the loud crash of the terrorists’ hire van smashing into the railings and began running down stone steps towards Borough Market.

But Ms Zelenak was wearing high heels and appeared to lose her balance, falling over on the wet pavement.

She was aided by James McMullan, 32, but the inquest at the Old Bailey were told the pair had ‘no chance’ as the attackers were already running towards them.

By-stander Erick Siguenza filmed terrified people screaming and running away as the pair were stabbed with 12-inch knives. 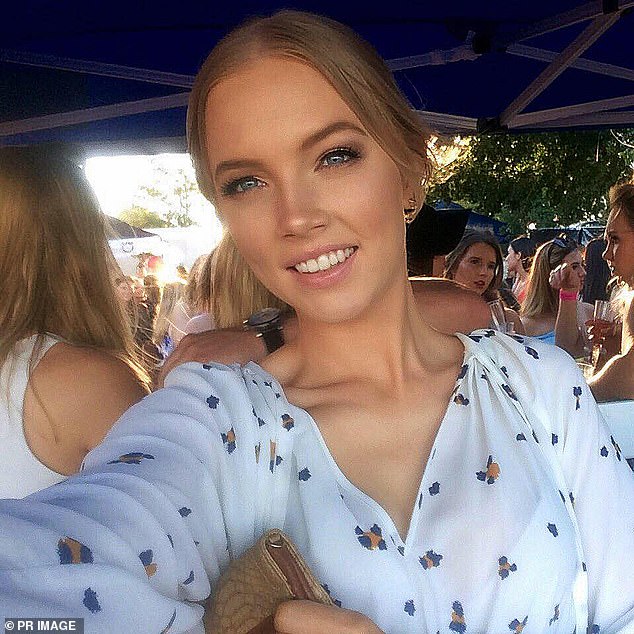 Sara Zelenak, 21 (pictured in handout photo) had met up for drinks with her friend Priscila Goncalves near London Bridge before terrorists killed her and seven others on June 3 2017 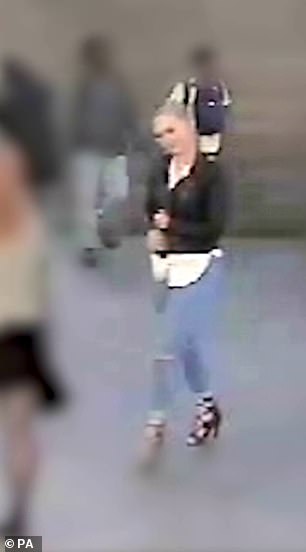 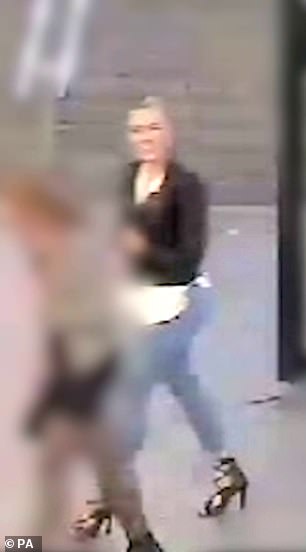 Australian Ms Zelenak was stabbed in the neck after she fell over in her high heels. She is pictured earlier that evening

Ms Zelenak’s parents Julie, 52, and Mark Wallace, 51, were seated in court as Ms Goncalves said: ‘I think she was just next to me. We were going down the stairs and then we heard something, and we went up to see what was happening and people started to say run and that is what we did.

‘It was like a loud crash. It sounded like something big, that is why we went back to take a look. At the time it seemed to be coming from my right.

‘I think, I thought I had seen the van but now I don’t think I had, actually I was just confused. I had no idea what was going on.

‘We were together. I started running, I thought she was with me but when I looked, she was not. Everybody was running.’

Footage was played in court showing Ms Goncalves and Ms Zelenak sheltering from the heavy rain before entering London Grind where they stayed for about 45 minutes before moving down towards Borough Market.

Ms Goncalves added: ‘We just wanted to continue our night and have fun’. 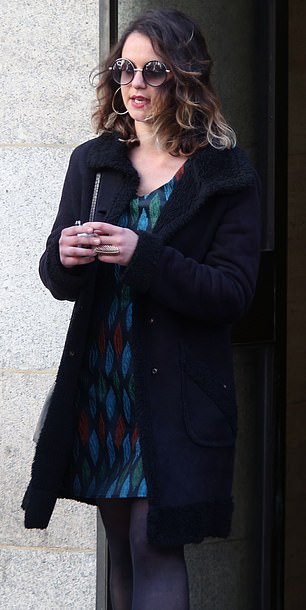 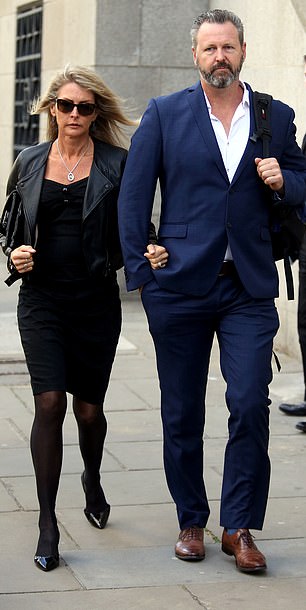 Ms Zelenak’s friend Priscila Goncalves is pictured at the Old Bailey in London today, left, with her parents Julie, 52, and Mark Wallace, 51, right 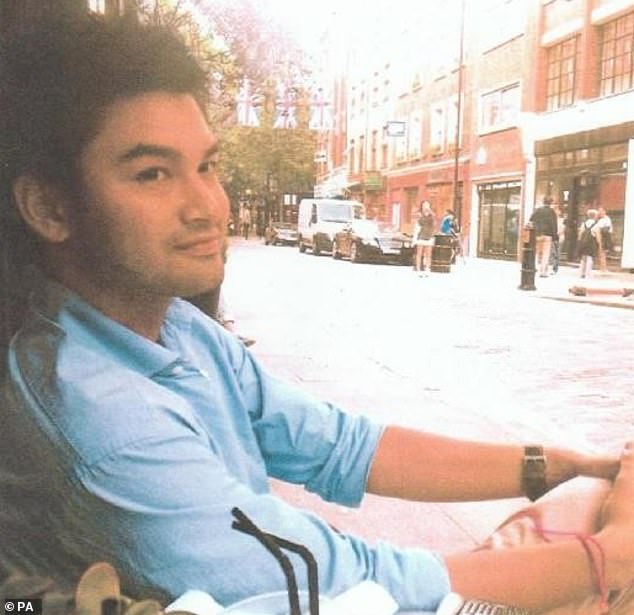 James McMullan, 32, tried to help Sara Zelenak, 21, after she fell over as she ran away from the terrorists, but the pair were stabbed to death 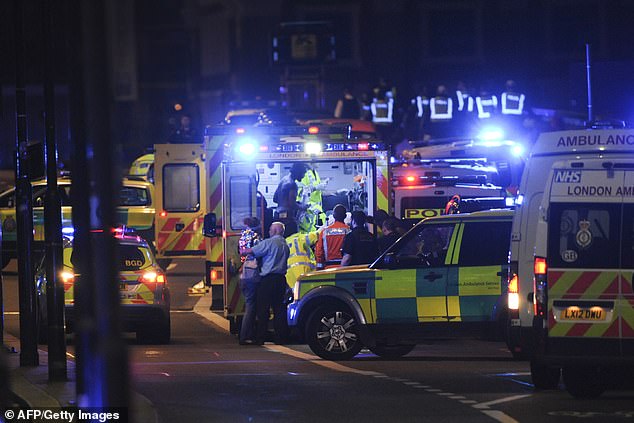 Erick Siguenza, who filmed the attack, told the court he saw another victim, Briton James McMullan, trying to help Ms Zelenak up after she slipped over.

He told the court: ‘As soon as the van crashed they stepped out and the driver stabbed the woman that had jumped out to get out of the way of the van crashing.

‘That’s when they started stabbing her. I believe there was a gentleman trying to help her get up and he was stabbed as well.

‘As I was recording there was a lot of screaming and just people realising what was going on and just shouting in general.’

Gareth Patterson QC, representing the victims’ families, said: ‘We know Sara Zelenak was found within minutes at the top of the steps and we know the young white woman with long hair had stab injuries.

‘We also know she was wearing high heels and on the ground it was quite wet that night.

‘From what you saw of this man helping her, did you get the impression she lost her balance?’

The witness said: ‘Yes. She was completely on the ground. He just grabbed her left arm and gently tried to pick her up but by then the attackers were in close proximity and that’s when they started attacking.

‘There was no time for him to be able to help her up because the driver and the other terrorists were already running towards them.’

Ms Zelenak was stabbed more than once and her helper, Mr McMullan, the only British victim, suffered a wound to his chest.

Mr Patterson QC, suggested that Ms Zelenak’s high heels coupled with wet weather might have caused her to suffer an ankle injury.

He said: ‘Maybe those two factors contributed to make her less stable than she might otherwise have been when this sudden attack came on her.’

Giving evidence, Ms Goncalves said they left the London Grind to continue their night out and ‘have fun’.

‘When we were crossing the bridge we saw this bar where there are some tables outside, some red lights. It was really close to the cathedral. We thought it would be a really good idea to go there.’

As they went down the steps towards the bar, they heard a ‘crash’ and went back to have a look.

She told the court: ‘She was just next to me. When we were going down the stairs and then I heard something and then we went up the stairs to see what happened and people started saying ‘run’ and that’s what we did.

‘I thought I had seen the van but now I don’t think I had actually. I was just very confused.’

She said: ‘I had no idea what was going on. We were together. People said run. I started to run. I thought she was with me and then I looked, she was not. Everybody was running.’

Ms Golcalves tried to contact her friend on Facebook after she took refuge in a hotel but she was unable to get a response. 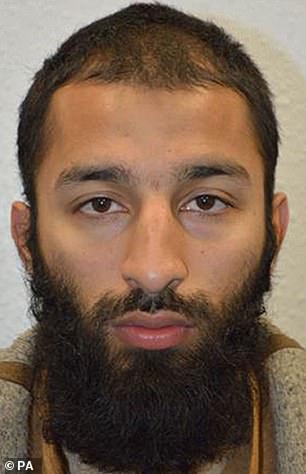 Ms Zelenak was wearing high heels, a black leather jacket, a white t-shirt and blue denim jeans, when she was stabbed to death by the fanatics, the hearing was told.

PC Clint Wallis, attached to Peckham Police Station, raced to the scene fearing a repeat of the Westminster Bridge attack and found Ms Zelenak lying next to a wall covered in blood.

Ms Zelenak was clutching her mobile phone which was flashing as friends were trying to get in touch with her as PC Wallis battled to save her life.

‘There was quite a deep laceration and cut to the left side of her neck and she also had some blood in her groin area,’ PC Wallis said.

‘I checked to find a pulse and she was not breathing. I moved her body away from the wall and started CPR and chest compressions.

PC Wallis said he was told there were three men armed with knives in the Borough Market area and began looking for paramedics or officers to help.

After ten minutes of CPR Ms Zelenak was still unresponsive and was declared dead by a paramedic who was recorded saying: ‘You know what? There is not enough resources here.’

After trying to save Ms Zelenak the officer also administered first aid to James McMullan, who had been stabbed to his abdomen and face.

‘As I gave mouth to mouth the air came out of the wound to his chest,’ the officer recalled.

After moving the body to try and find help PC Wallis was approached by a paramedic who said Mr McMullan had died from his wounds. 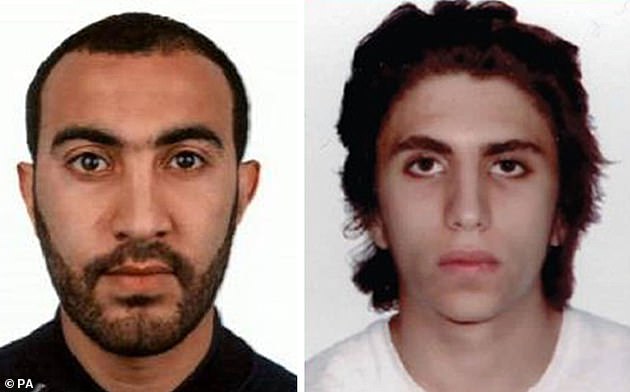 Judge Mark Lucraft, QC, Chief Coroner of England and Wales, praised PC Wallis, saying: ‘Can I just pass on my thanks for what you did.’

PC Richard Norton, who also tried to save Ms Zelenak’s life, said: ‘There was very little street light in that area where Ms Zelenak was. There were members of the public around us and we asked them if any had a torch.

‘They used their mobile phones as a torch. I could see copious amounts of blood on the floor. I could see she had multiple stab wounds to the left side of her neck. Her eyes were open.

‘It became quite clear that there no paramedics or ambulances being sent to us.’ PC Norton was asked whether he remembered hearing gunfire in Borough Market and he replied he did.

Ms Zelanak and Mr McMullan were two of eight victims murdered in the van and knife rampage by Khuram Butt, 27, Rachid Redouane, 30, and Youssef Zaghba, 22. 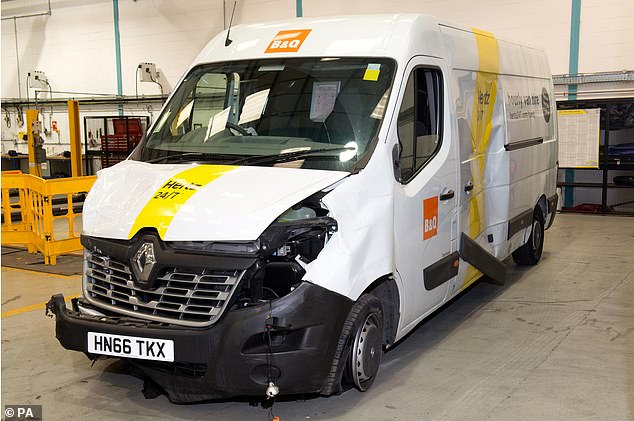 Pictured: the battered Renault van used by terrorists during the attack on London Bridge in 2017, leaving it with its bumper hanging off