Arron Banks is today being investigated by Britain’s FBI over suspected crimes carried out ahead of the EU referendum campaign.

The millionaire insurance broker, 52, who has been nicknamed the ‘Bad boy of Brexit’, may have hidden the ‘true source’ of £8million in loans linked to campaign group Leave.EU.

The Electoral Commission has referred the insurance millionaire to the National Crime Agency who have launched an investigation today into ‘multiple suspected offences’.

There are reasonable grounds to suspect that Banks, Brexit’s biggest financial backer, was not the ‘true source’ of £8million of loans to the unofficial Brexit campaign group, the commission has said.

And it is alleged there is reason to believe he was part of a conspiracy to ‘conceal the true details of these financial transactions’.

Liz Bilney, CEO of Leave.EU, is also being investigated by detectives – but neither she nor Banks have been arrested.

In response Mr Banks said he is ‘confident that a full and frank investigation will finally put an end to the ludicrous allegations levelled against me and my colleagues’ and blamed ‘intense political pressure from anti-Brexit supporters’. 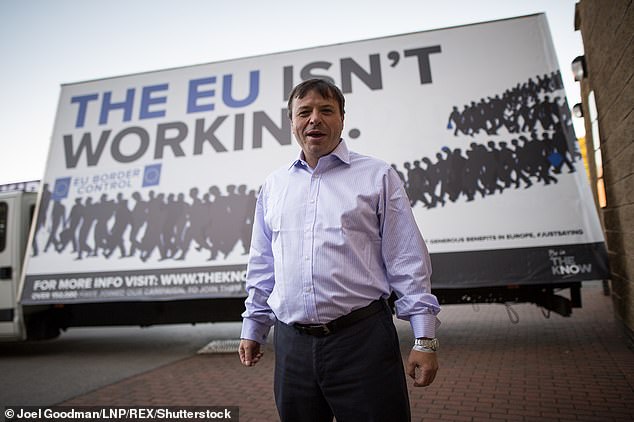 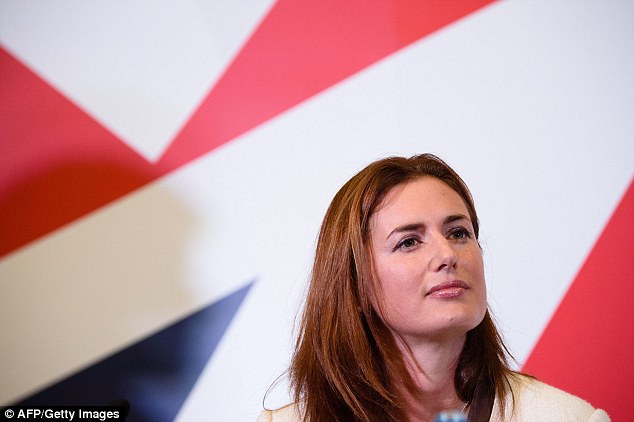 Liz Bilney, CEO of Leave.EU, pictured in 2015, is also being investigated by detectives looking into whether the source of funds was concealed

He added: ‘I am pleased that the Electoral Commission has referred me to the National Crime Agency.

What is the law on political donations?

Donations to electoral candidates and political campaigns are governed by the Representation of the People Act 1983.

The act gives a list of ‘permissible donors’ which include:

‘There is no evidence of any wrongdoing from the companies I own. I am a UK taxpayer and I have never received any foreign donations. The Electoral Commission has produced no evidence to the contrary.

‘The Electoral Commission has referred me to the National Crime Agency under intense political pressure from anti-Brexit supporters.

‘I am already in court with the Electoral Commission. In witness statements the commission has admitted it got its figures wrong in relation to a previous investigation and it even submitted its final report without taking evidence from us’.

Banks personally loaned £2million to Better for the Country, the company used to finance the Leave.EU campaign and he also gave £6million to the same company, on behalf of Leave.EU.

But police will now investigate claims that he was not the ‘true source’ of the money and whether it was from a company or individuals abroad, which could break British electoral law.

According to the Electoral Commission the main allegations are:

Bob Posner, the Electoral Commission’s director of political finance and regulation and legal counsel, said: ‘We have reasonable grounds to suspect money given to Better for the Country came from impermissible sources and that Mr Banks and Ms Bilney, the responsible person for Leave.EU, knowingly concealed the true circumstances under which this money was provided. This is significant because at least £2.9m of this money was used to fund referendum spending and donations during the regulated period of the EU referendum.

‘Our investigation has unveiled evidence that suggests criminal offences have been committed which fall beyond the remit of the Commission. This is why we have handed our evidence to the NCA to allow them to investigate and take any appropriate law enforcement action. This is now a criminal investigation.

‘The financial transactions we have investigated include companies incorporated in Gibraltar and the Isle of Man. These jurisdictions are beyond the reach of the Electoral Commission for the purpose of obtaining information for use in criminal investigations or proceedings.’

The National Crime Agency said in a statement: ‘The NCA has initiated an investigation concerning the entities Better for the Country (BFTC) and Leave.EU; as well as Arron Banks, Elizabeth Bilney and other individuals. This follows our acceptance of a referral of material from the Electoral Commission.

‘Our investigation relates to suspected electoral law offences covered by that referral, as well as any associated offences.

‘While electoral law offences would not routinely fall within the NCA’s remit, the nature of the necessary inquiries and the potential for offences to have been committed other than under electoral law lead us to consider an NCA investigation appropriate in this instance.

‘This is now a live investigation, and we are unable to discuss any operational detail.’