Labour plunged into fresh Brexit chaos today as Emily Thornberry insisted the party could back a second referendum – despite Jeremy Corbyn saying the process of leaving the EU ‘can’t be stopped’.

The muddled stance came as Theresa May struggles to thrash out a deal with the EU – amid rising fears that negotiations could fail.

But Labour’s confusion over how to respond to the outcome of the talks was highlighted as Mrs Thornberry was grilled on TV.

Many of the party’s MPs have been demanding a so-called ‘People’s Vote’ to stop Brexit, and were furious when Mr Corbyn said in an interview yesterday: ‘We can’t stop it. 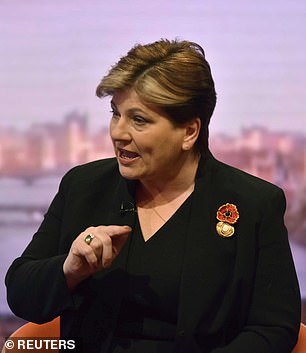 In an interview today, Emily Thornberry (left) insisted Labour could back a second referendum – despite Jeremy Corbyn (right at a Remembrance Day event in London today) saying the process of leaving the EU ‘can’t be stopped’ 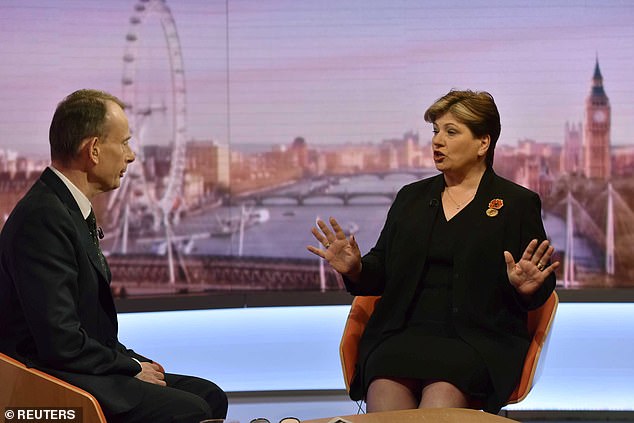 ‘The referendum took place. Article 50 has been triggered. What we can do is recognise the reasons why people voted Leave.’

But Mrs Thornberry said today that the option of campaigning for a second referendum was still on the table.

‘Theresa May is simply giving us a devil in the deep blue sea – she’s saying you can either fall off a cliff or get on this bridge to nowhere, and you’re going to have to vote on that,’ she told the BBC’s Andrew Marr Show.

‘That’s not a meaningful vote, that’s not an injection of democracy.

‘So, we say if you’re going to give us that, we refuse to play that sort of game and, frankly, if you can’t come up with a decent suggestion then we should have a general election, if we don’t have a general election then yes, of course, all the options remain on the table and we would campaign for there to be a people’s vote.’

Calls for a referendum were fueled on Friday when Boris Johnson’s brother Jo dramatically quit, saying the emerging divorce package was a disaster and urging another national vote.

‘If I was Theresa May, I would call a second referendum — no doubt,’ he told Politico.

Large numbers of Labour MPs, the SNP, the Lib Dems and some Tories have joined the campaign to force a new vote that could cancel Brexit altogether.

Polls have also suggested that the balance might have swung away from the 52 per cent to 48 per cent result last time. 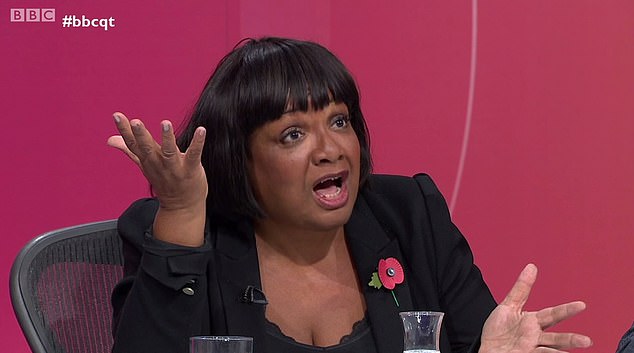 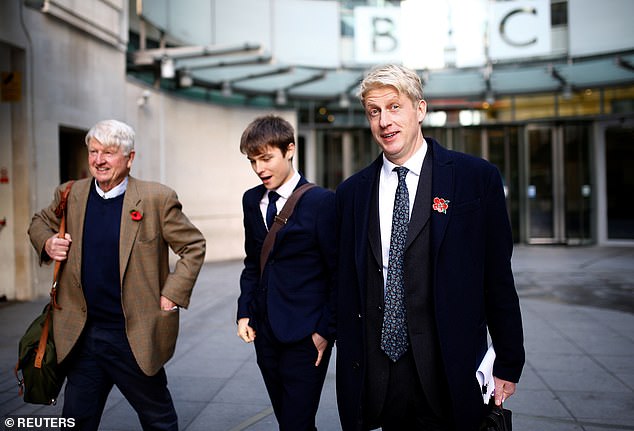 But Mrs May has dismissed the idea pointing out that the country made a clear decision on the issue in 2016.

The Labour leadership has so far resisted grass roots pressure to endorse the plebiscite.

Shadow home secretary Diane Abbott laid bare internal splits last week by delivering a stark warning that people should be ‘careful what you wish for’.

She admitted her constituents were furious about leaving the EU and said MPs should not be forced to back a ‘bad and destructive deal’.

But she said she believed that another national vote on whether to leave the bloc would just give the same result, with the public asking: ‘Didn’t you hear us the first time?’

Mrs Thornberry was pressed on how Labour would secure a better Brexit deal and asked if she has had a ‘serious conversation’ with a senior EU official who has suggested the UK could meet the party’s demand for the exact same single market and customs union benefits post-Brexit.

She replied: ‘Oh, no, no, no, no, of course not. But what we’ve had are discussions and they know what it is that we want, and they know we are democrats and if they were in our position they’d be trying to negotiate exactly the same way as we are.’

Jo Johnson, who supported Remain in the referendum campaign, delivered a stinging rebuke to Mrs May’s Brexit position as he walked out of Government in protest.

He said: ‘To present the nation with a choice between two deeply unattractive outcomes, vassalage and chaos, is a failure of British statecraft on a scale unseen since the Suez crisis.

‘We are barrelling towards an incoherent Brexit that is going to leave us trapped in a subordinate relationship to the EU.

‘With no say over the rules that will govern huge swathes of our economy.’