From their high-tech perch across the Potomac River, air-traffic control specialists at Reagan National Airport can easily peer down at the White House, the Capitol building and many of Washington’s centres of power.

Yet, even in their elevated fishbowl, the men and women at the Washington, D.C., airport who direct the nation’s skies feel powerless while on the job these days.

A record-breaking partial government shutdown can have that effect.

The roughly 25 controllers who staff the tower at Reagan National have been working for 27 days now without pay. Despite many of them receiving their first zero-dollar pay stubs last week, traffic management co-ordinator Aubrey Farrar said nobody has lost their edge. They can’t afford to — not when they’re helping to direct about one flight per minute, and ferrying tens of thousands of travellers a day.

“Quite a view, huh?” he said, amid the crackle of radios.

“It’s not a quiet place up here, but we have to make sure we hear everything that’s going on. You hear about maybe seven conversations going on right now. You tune in and tune out. You learn to work very closely together.” 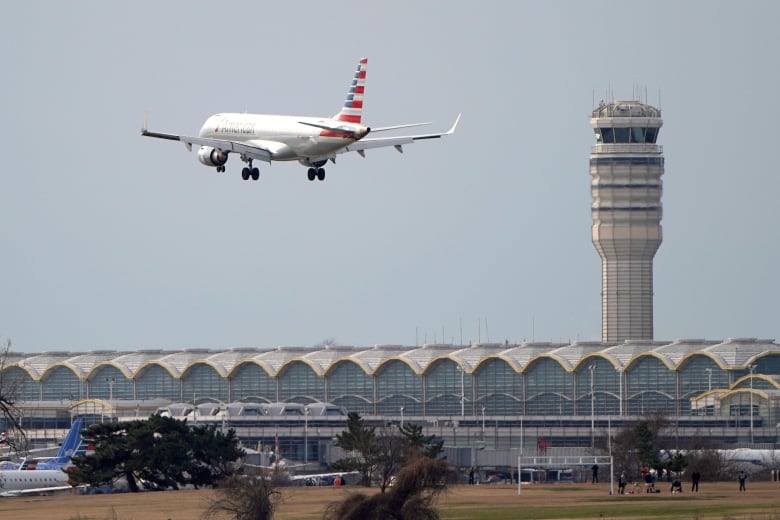 An American Airlines Embraer ERJ-190AR airplane flies past the tower where air-traffic controllers work despite not receiving their paychecks at Reagan National Airport in Washington, D.C. (Joshua Roberts/Reuters)

Farrar’s colleagues are like family to him. But he worries they’re being treated like collateral damage in an ongoing stalemate over funding for U.S. President Donald Trump’s wall.

“What you see happening across the river, that’s like they’re messing with the people you know and love.”

Daycare costs, grocery bills, gasoline expenses, mortgages — his colleagues are taking it all on without a steady income for now. Farrar, 30, has a 12-month-old baby and is supporting his wife through medical school. The controllers are all professionals, he said, but that doesn’t mean they’re having to deal with the added financial burdens in such a high-stakes job.

NATCA members are loath to talk politics. But the union is suing Trump to end the government shutdown, arguing that they’re being deprived of compensation without due process.

“I think morale has started to take a little bit of a hit,” said Mike Christine, the union vice-president for the Washington Air Route Traffic Control Center. “Our air-traffic controllers have a huge responsibility of ensuring the safety of the flying public. These unnecessary distractions of not being able to pay for daycare, not knowing when my next cheque will be, what am I going to do if I don’t pay the mortgage — that’s just not going to help us do the job that we’re trusted to do.” 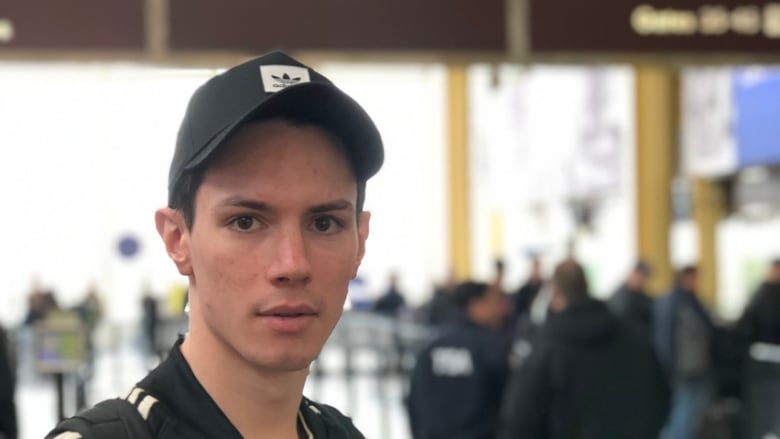 Sebastian Wasinger, 21, a fashion stylist en route to Barcelona, says he support U.S. President Donald Trump’s demand for $5.7 billion to build a border wall along the U.S.-Mexico border, and that the longest government shutdown in American history is the ‘price to pay’ for border security. (Matt Kwong/CBC)

In much the same way that critics of the shutdown have warned that furloughs at the Food and Drug Administration could bring about another E. coli food scare, the shutdown’s effects on airport and aviation security are a mounting national concern.

The Transportation Security Administration (TSA) revealed on Monday that a Delta Air Lines passenger accidentally brought a loaded gun through screening in Atlanta and onto his Tokyo-bound flight this month. Although officials insisted that improper procedures — and not low staffing levels — were the cause of the breach, it served as an eyeopening reminder of the critical need for airport screening and aviation safety.

Sick calls among TSA workers have doubled from last year, up to 7.6 per cent on Monday. Passenger-screening lane closures due to absences at Washington Dulles International Airport led to massive lineups. At Reagan on Wednesday, travellers were arriving three or four hours before their flights, anxious about long security wait times. Wait times at Atlanta’s Hartsfield-Jackson airport, the busiest in the world, reportedly stretched more than an hour.

“My friend told me to get here very early because TSA could be a big pain,” said Sebastian Wasinger, a fashion stylist who arrived at Reagan at 11 a.m. for a 2:40 p.m. flight to Barcelona. 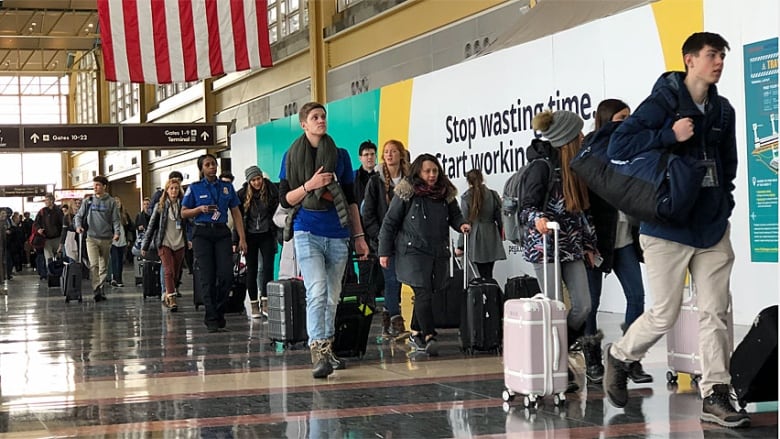 Airline travellers walk through Reagan National Airport. Some showed up nearly four hours before their departure times, due to anxieties about long wait times at security screening. (Matt Kwong/CBC)

Wasinger, a Trump supporter, favours the shutdown if it can fund the president’s proposed wall along the southern border.

“This is the price to pay” for border security, he said. “So I’m OK with that.”

Screening times at Reagan have been manageable so far, but the prospect of TSA staffers working for a fourth week without pay is worrisome for TSA lead screening officer Rachel Abraham. She was busy carting 20 boxes of pizza to her colleagues at the end of her shift — food donated by a friend.

“For me, it’s two of us who work for the government. It’s rough because you just lost two incomes,” said Abraham, whose husband was furloughed from U.S. Immigration and Customs Enforcement.

Money is tight. The couple has been given leniency from utility companies for their bills, but they’ve had to give up on small pleasures like going to the movies this month. 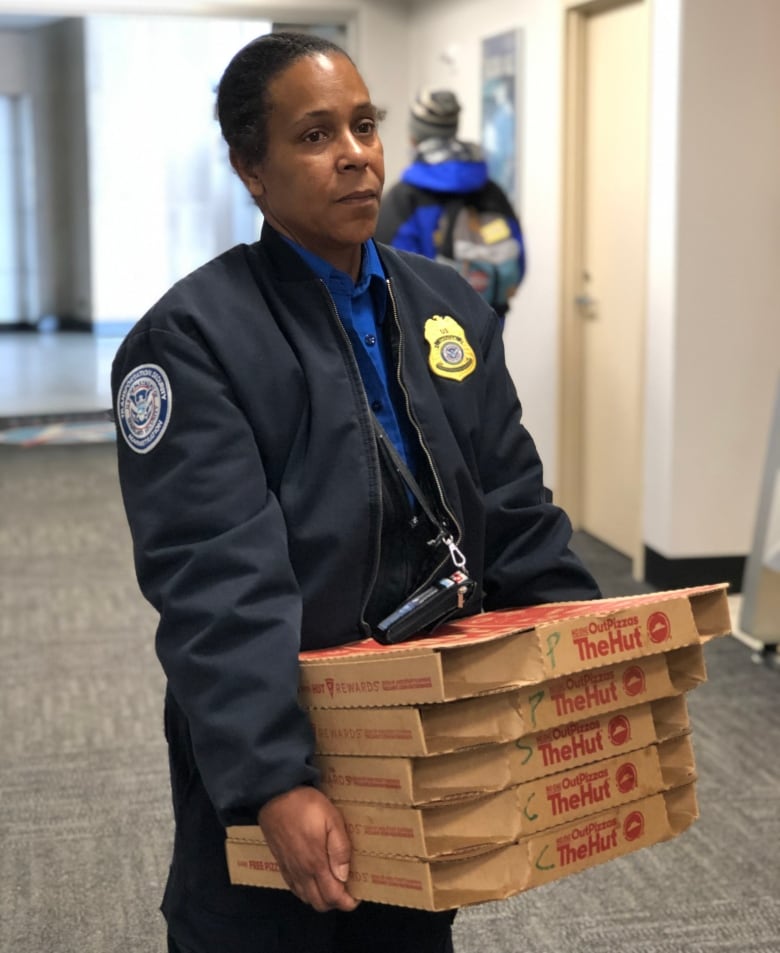 Rachel Abraham, a security official at Reagan airport, delivers boxes of donated pizza to her TSA colleagues on Wednesday, during the 26th day of the U.S. partial government shutdown. (Matt Kwong/CBC)

The pizza boxes she stuffed through X-ray machines was a small gesture — a free lunch to help save a few dollars here and there — but it brought a few smiles to people’s faces.

Down near a designated pre-security concourse in Terminal C, air-traffic controller Chris Schreiber was handing out NATCA “Stop the shutdown!” leaflets.

One pilot for a major U.S. carrier stopped to chat.

“These guys are like the heart for the human body,” the pilot, who asked not to be named, said after taking a pamphlet. “This whole [shutdown] is bullshit.”

The air-traffic controllers union represents 3,000 aviation safety professionals who have been furloughed, among them staff support specialists and engineers. Those absences can weaken the aviation system.

“You wouldn’t send a surgeon in to do an operation without the nurses and the people he or she needs to perform a safe operation,” said Scott Davis, another controller who distributed NATCA literature.

“It’s kind of the same way. We’re showing up, plugging in our headsets and working the planes every day. But we don’t have those people doing quality assurance, the technical people, people to go with for payroll questions, health-benefit questions.” 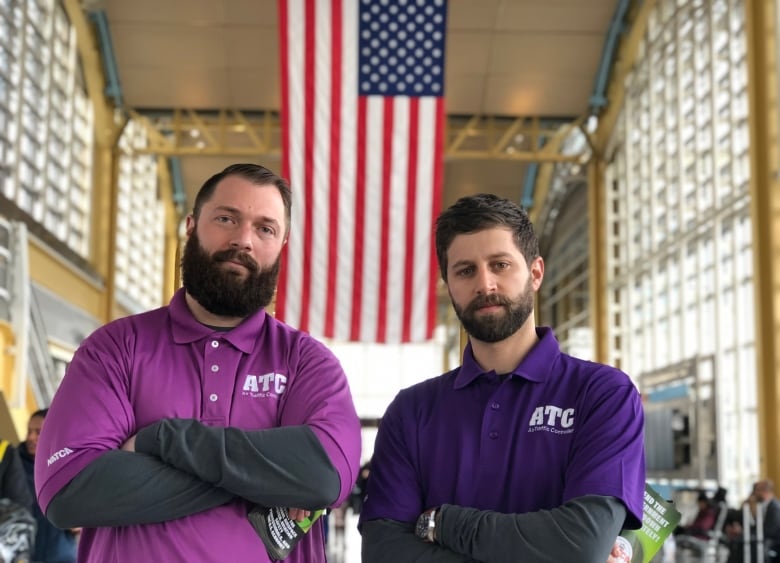 The number of fully certified air-traffic controllers are already operating at 30-year staffing lows. Davis has been working six-day weeks for the past year-and-a-half due to the staffing shortage.

In the meantime, the shutdown has also closed the Federal Aviation Authority’s Academy, meaning fewer qualified controllers will be able to help replenish the workforce.

Controllers warned that the FAA has stopped issuing directives that mandate safety fixes for existing aircraft; that special workgroups aren’t meeting during the shutdown to discuss new safety procedures; and that maintenance delays could lead to malfunctioning technologies.

But hearing about the plight of federal workers at the airports didn’t give Dena Wachtel, 38, any new anxieties about flying. Wachtel, who came to Reagan three hours early in anticipation of long lineups, wasn’t feeling nerves, she said, but gratitude.

“What I would like to say to them is thank you. Thank for doing your job at a very challenging time,” she said. “Thank you for keeping us safe. Because it is so necessary. For all of our sakes.” 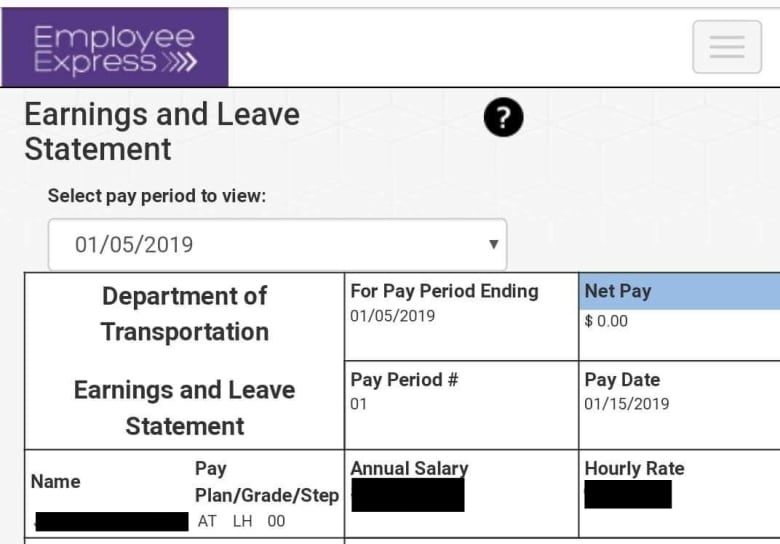 An electronic paystub dated Jan. 5, 2019, for an air-traffic controller at Reagan National Airport shows a net payment of $0.00.