Businessman Arron Banks flew back into the country yesterday to talk to police probing his donations to pro-Brexit campaigns – armed with bank statements which he claims prove his innocence.

Mr Banks, who is being investigated by the National Crime Agency (NCA) over whether he was the ‘true source’ of £8 million given to the Leave.EU campaign, claims he is the victim of a ‘politically motivated’ vendetta by the ‘anti-Brexit Establishment’.

The insurance tycoon has faced allegations that he was a conduit for Russian money during the 2016 referendum as part of a Moscow-backed plot to destabilise the UK by encouraging Brexit. 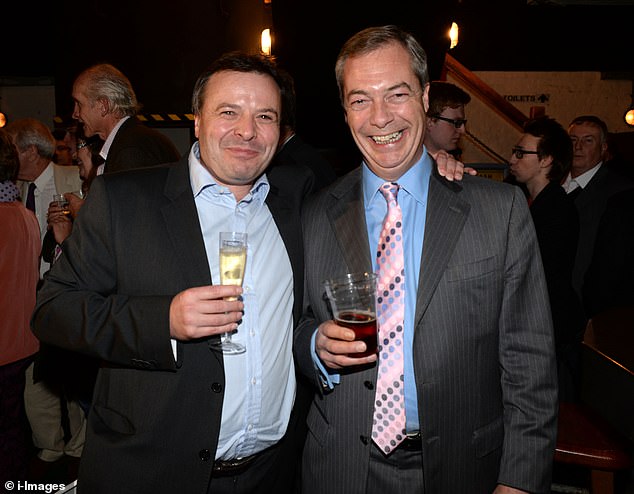 Conifdent: Arron Banks and Nigel Farage. The businessman has flown back into the country yesterday to talk to police probing his donations to pro-Brexit campaigns

Mr Banks, who was returning from holiday in Bermuda, showed bank statements to The Mail on Sunday which he said proved that ‘no large amounts of cash flowed in during 2015 or 2016 from any source’.

The self-proclaimed ‘Bad Boy of Brexit’ will show the documents to NCA officers tomorrow.

The partially redacted statements show modest incomes and outgoings at Rock Holdings, an account at the centre of the probe.

‘I have done nothing illegal and I am confident I will be cleared of the ludicrous allegations levelled against us’, Mr Banks said.

He described as ‘absurd’ the claim he was ‘an agent of the Russian state’. ‘I understand that among the millions who voted Remain, many still feel sore that they lost,’ he said.

‘That does not give them the right to undermine the will of the majority. They simply have to accept that if they want to live in a democracy, Brexit is a reality.’

The Electoral Commission also referred Leave.EU, its chief executive, Elizabeth Bilney, and the organisation that ran it, Better For The Country, to the NCA.

Bob Posner, the Commission’s director of political finance, said: ‘We have reasonable grounds to suspect money given to Better For The Country came from impermissible sources and that Mr Banks and Ms Bilney knowingly concealed the true circumstances under which this money was provided.

‘This is significant because at least £2.9 million of this money was used to fund referendum spending and donations.’ Mr Banks insists that lawyers prepared his ‘loan structure within Electoral Commission rules’.