When Pat Hodnett’s sister-in-law passed away last year, a bouquet of “cheerful” flowers seemed the perfect way to honour her memory.

Hodnett looked online and came across Bloomex.ca. With Betty in mind, she selected a bouquet of 50 daisies — an arrangement called the Voyage of the Doves — and paid a total of $73 to have the flowers delivered to the church.

“I just thought she would love them,” Hodnett said.

But when she arrived at the funeral service, her daisies were nowhere to be found.

“It was just very cheap-looking … I was so embarrassed,” said Hodnett. “I just wanted to hide it.”

Billing itself “Canada’s official florist,” Bloomex advertises that it purchases flowers directly from growers and suppliers in order to deliver a fresh product to customers for a better price.

The Ottawa-based company also claims to be Canada’s largest florist and operates nationally, shipping products from eight warehouses across the country. Bloomex also sells other products, like gourmet gift baskets and balloons.

To test the quality of Bloomex’s products, Marketplace ordered five different bouquets from the online retailer to be delivered within the Toronto area.

None arrived within the selected delivery window, even though Marketplace had paid extra for them to be delivered at that time. Delivery confirmation emails for each bouquet also arrived prior to any of the bouquets being delivered.

Marketplace also showed all five bouquets to Don Waltho, a longtime florist and founder of the Canadian Institute of Floral Design (CIFD), a private career college registered with the Ontario Ministry of Training, Colleges and Universities, asking him to compare the delivered products with the flowers that were advertised on Bloomex’s website.

Overall, Waltho graded all five bouquets as a “fail” due to the poor quality and condition of the flowers; he also identified many flowers that were missing or where others were substituted in.

Bloomex’s substitution policy states that “due to our order volume fluctuation, we reserve the right to substitute with similar product of equal or greater value.”

But with the bouquets Marketplace received, Waltho said that wasn’t always the case. He noted all of the greenery in the bouquets was leather fern, for example, what he described as a cheap substitute for the greenery shown in the images.

“If I was your husband [and] I gave these to you … you’d say don’t send me flowers … let’s just go out for our anniversary, let’s go to dinner,” he said.

“I’m ashamed of people in my industry sending this kind of material out to consumers.”

Waltho said he worries that the quality of the Bloomex’s bouquets could tarnish the floral industry — and he’s not alone. Don Waltho, who has more than 30 years experience in the floral industry, graded all five Bloomex bouquets delivered to Marketplace as ‘fails’ due to the poor quality and condition of the flowers. (Jenny Cowley/CBC)

Marketplace shared footage of the bouquets with other retail florists and floral design instructors, specifying only that the flowers were ordered online, without naming the company they had come from.

“I was actually completely taken aback looking at them,” said Becky De Oliveira, the owner of Blush and Bloom Flower Studio in Toronto. “After 20 years in flowers, I was both mortified and embarrassed.”

De Oliveira has worked in retail shops that offer online ordering and said it was often difficult to meet client expectations and replicate bouquets exactly as advertised, noting factors such as what was in stock and seasonal availability come into play.

But she called the differences in the flowers ordered by Marketplace “astounding.”

Customers are usually not picky about flower substitutions, De Oliveira said, adding she would inform her clients when swaps needed to be made.

Marketplace has also tested Bloomex in the past. Since that 2010 episode, dozens of unhappy customers have been in touch with the program, complaining of poor-quality flowers, late delivery, or no delivery at all.

“I ordered flowers for my grandmother’s 81st birthday a few days in advance and paid the extra shipping to make sure it would be delivered on her actual birthday,” said Sage Daniels. “My grandma finally got the irises after two weeks. They never opened … and died with in three days.”

Bloomex offered a credit for the late flowers, Daniels said, but refused to cover the additional delivery cost.

Because of a Bloomex bouquet, Katrin Chitaroni said she spent much of the funeral for her best friend’s parents picking up petals off the carpet.

“The chrysanthemums were so dry and old that they had their heads hanging down.… It was embarrassing.”

JudyAnn Jensen said she used Bloomex to send a “gourmet” gift basket and planter to family friends who just buried their parents. The items that were included were digestive cookies, sour soothers, Bigfoot candies and a box of Triscuits — none of which are pictured in the baskets advertised on Bloomex’s website. 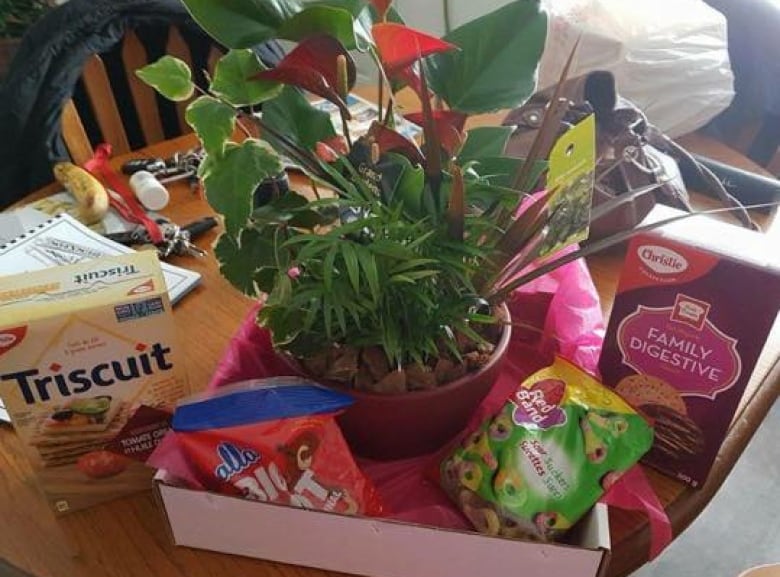 When Jensen complained, Bloomex told her that in the “unlikely event” the company is sold out of a particular product, “we are able to substitute with another similar product.”

“I don’t believe digestive [cookies], Triscuits and sour suckers are remotely close to ‘similar products,’ let alone the nature of sending such items to a family who just buried both their elderly parents.”

Marketplace shared the findings of its delivery test with Bloomex, including photos and general delivery locations. The company declined an interview, stating it needed more information. But in letters sent through a lawyer, Bloomex stated that “flowers are perishable” and the company “makes every effort to get flowers delivered in good condition.”

The company also stated it “endeavors to address all complaints quickly” and that their policy requires customers looking for replacement flowers or refunds to send a photo of what they received.

As for Pat Hodnett, when she reached out to Bloomex to complain about her bouquet, she said she was hung up on by Bloomex staff in mid-conversation.

“I told her how unhappy I was, that I was embarrassed and that it wasn’t what I ordered and that I wanted my money back,” she recalled.

Hodnett was told she’d need to email the manager, but when she asked for that contact information, the response was a dial tone.

After refusing Bloomex’s offer of a discount off her next order, it took a complaint to Ontario’s Ministry of Government and Consumer Services to receive a refund.

Ultimately, Hodnett says, it’s not too much for customers to expect to receive what they paid for.

“Be truthful. Do what you say you’re going to do, and be upfront about it.”