A former Upper Canada College student who claims he was sexually assaulted by fellow students at the prestigious Toronto private school more than 30 years ago says the recent allegations at St. Michael’s College School have prompted him to go public.

“I think the more people that are able to speak out about it shines a light on the things that happen and makes it easier for other people who have been through it to come forward,” said Stuart Cowan, who is in his 50s today.

Police laid criminal charges last week against six students in connection with an alleged gang sexual assault at St. Michael’s College School, an all-boys private Catholic school in Toronto. The principal and president of the school have resigned.

Cowan attended UCC in the 1970s and 80s. He described the environment as “dog eat dog” and said bullying was rampant throughout the elite, all-boys school.

He said he excelled academically and was an accomplished athlete, playing on the football and hockey teams. Still, he said, he was more of a non-conformist, didn’t want to belong to a clique, which made him a target for bullying.

“Constant name-calling, physical attacks, grabbing your backpack, stealing your lunch, you know, Movie of the Week kind of stuff,” he said.

He said, for him, turning to teachers for help wasn’t really an option, as he witnessed many of them exhibiting similar bullying behaviour, name-calling and picking on students.

Upper Canada College, above, says it put in place new policies in the early 2000s to better protect students. It said in a statement that harassment, abuse or intimidation would not be tolerated and any reports of such behaviour would be investigated and acted upon. (Kevin Frayer/Canadian Press)

CBC News is relying on Cowan’s own account of his time at UCC and has not independently verified the details.

UCC said in a statement to CBC that it does not tolerate harassment, abuse or intimidation, which, it said, “are against everything the college stands for as an educational institution.”

The school said it wouldn’t be appropriate to comment on individual cases in the media but that it would welcome hearing from Cowan.

It said it has reached out to students and alumni in the past.

“For any and all allegations brought to our attention, we have always met with the individual, listened and taken appropriate action,” the statement said.

School apologies for past abuse

Cowan attended the school when Doug Brown was a teacher. In 2005, Brown was sentenced to three years in prison after being found guilty on nine charges of indecent assault involving students at the school.

Cowan said Brown was one of his teachers but never assaulted him. However, he said he was aware of complaints about Brown that the school appeared to have ignored.

“What signal does that send to everybody? There was no protection from the administration to speak out against these issues,” he said. 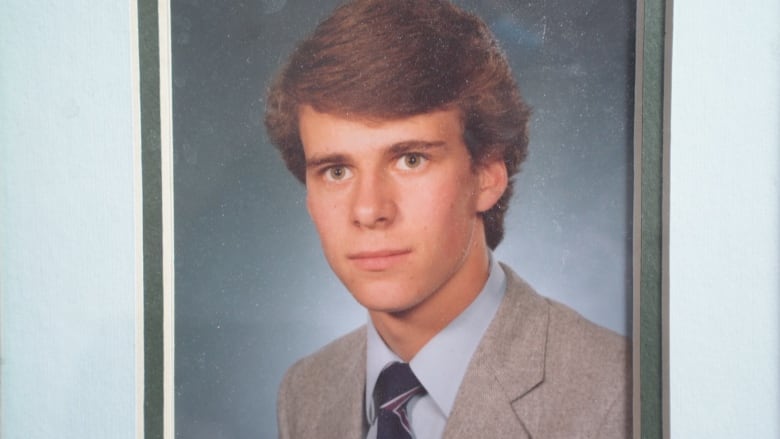 Cowan’s graduation picture from UCC. He said he had behavioural and relationship issues later in life as a result of the abuse he experienced while attending the school. (CBC)

In 2007, the school sent a letter to students, parents and alumni apologizing “to all those in our community who ever endured or witnessed any form of sexual or physical abuse at the school,” the Toronto Star reported.

It also put in place new policies and protocols in wake of the Brown case aimed at “preventing, identifying and investigating harassment, abuse and violence.” The polices are regularly reviewed and updated, UCC said in its statement.

Cowan described one devastating experience he had as a UCC student during an out-of-town tournament for one of his school teams. Four of his teammates, including some of the team captains, asked Cowan to join them in their hotel room for a few beers, he said.

“And I thought, ‘Wow, this is cool. The captains are asking me.'”

[They] held me down, probably for about an hour. I struggled the entire time.– Stuart Cowan

He said he went up to their room and had a couple of beers, when the boys, two of whom were his friends, jumped him, pinned him down and stripped off his clothes.

He said he was subjected to a hazing ritual that included shaving off his pubic hair and fondling his genitals.

“I was cut, bruised and scraped. [They] held me down, probably for about an hour. I struggled the entire time,” he said.

One boy lay across his legs and two pinned his arms while the fourth had shaving cream and a razor, he said.

“They were having their jollies,” Cowan said. “They were enjoying themselves. They were chatting with one another and ignoring anything I had to say.”

He said he was “devastated” by the experience but didn’t want to tell anyone.

The next day, Cowan said, the team coach ridiculed him for having been attacked, laughed in his face and gave him a derogatory nickname.

“It stuck with me the entire time I was there and just made it known to me that he had condoned the entire event,” he said.

He said two of the boys came to his room afterward to try to apologize, but he told them off.

“I didn’t want anything to do with them. I was very upset.”

Cowan said he remained in contact with two of the boys, but the assault was just something they never talked about.

He remembers, about a decade after the assault, that he actually apologized to one of them for getting so upset about the attack.

“He was a bit off-put by my apology, so his perspective on it, I think, had grown,” Cowan said.

Any incident of assault or bullying is deeply troubling to us, and this story is no exception.– Statement from Upper Canada College

Years later, he was able to work through his issues, with professional help, he said.

As for the four abusers, he says, he has forgiven them.

“People make mistakes. The most important thing is to learn from them.”

UCC said in its statement that it is “a transformative time in our culture related to issues of assault and bullying” and that such conduct would not be tolerated, and reported incidents would be investigated and acted upon.

“Any incident of assault or bullying is deeply troubling to us, and this story is no exception. We applaud all individuals for their courage in sharing their stories,” the school said.