The international arrivals area of Vancouver Airport has seen many, many hugs, but none quite like the one between Hassan Al Kontar and Laurie Cooper on a dark, particularly stormy November night.

Al Kontar, a 37-year-old from Dama, Syria, had just landed after a nine-month ordeal that saw him living for seven months in the transit area of Kuala Lumpur airport, followed by two dark, isolating months in a Malaysian detention centre.

Cooper, along with a group of Whistler residents and the B.C. Muslim Association, offered to sponsor him after hearing about his case, and lobbied for months to get him out before his arrival on Monday night.

Standing arm-in-arm with Cooper, Al Kontar looked fragile in a blue T-shirt and jeans, his curly hair long and his beard unkept — too thin for someone so tall. On his feet he wore black flip flops, utterly unprepared for the Vancouver deluge outside.

Not much is known about how Al Kontar’s release was secured, other than the fact that Canadian government and a lawyer hired by Cooper quietly negotiated his release after his arrest.

“I did not believe it until they showed me the ticket,” he said, describing the moment he was told he’d be getting out. “I said until I reach Canada, nothing is sure.”

Al Kontar visibly winced when asked about his time in the detention centre, saying he was threatened with deportation to Syria on a daily basis.

But when asked about what he most looks forward to now, Al Kontar’s tired eyes lit up.

“For the time being, I need a hot shower for the rest of the day,” he said. “I’ve done my time in airports, no more airports. I’d rather use a horse if there’s no car.” 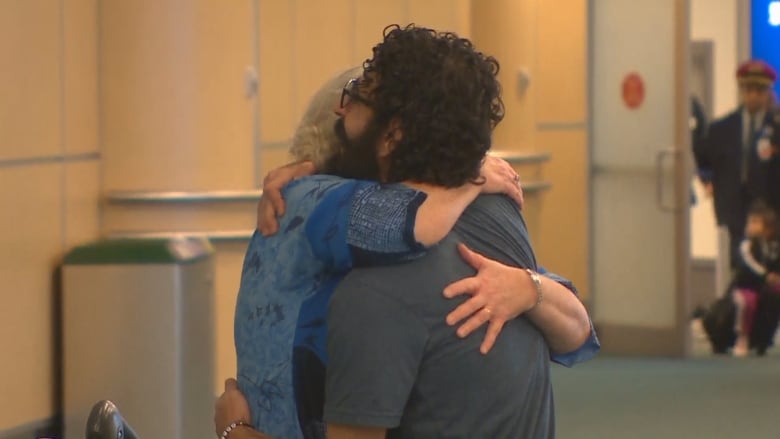 “When I was thinking of hope, her face was coming to my mind,” Al Kontar told Cooper, who worked tirelessly for months to bring him to Canada. (Chris Corday/CBC)

Like so many Syrians, Al Kontar’s struggle began in 2011.

For several years he worked in insurance in the United Arab Emirates, but he eventually lost his work permit and was left scrambling to find a country that would issue him a visa so he would not have to return to Syria.

This March, he was turned away from a Turkish Airlines flight at the Kuala Lumpur airport, causing his three-month Malaysian work permit to expire.

Unable to find a country that would issue him a visa, he became stranded in the bleak transit area of the airport.

On his Twitter account that eventually amassed thousands of followers, he documented his daily existence. In his soft, dry way, he mourned his country and the normal people caught up in the conflict, mused about his favourites movies, showed off the small assortment of plants he tended to and joked about his obsession with coffee.

He called his team of Canadians his “Avengers,” referring to the team of Marvel superheroes. He said he never lost hope, but also feared the worst.

Al Kontar said he didn’t sleep at all on his flight to Vancouver, passing the time by listening to music and watching movies. He said he hadn’t had a cup of coffee in two months and asked the flight attendants to “keep it coming.”

“And they did,” he said excitedly, perhaps still energized from all that caffeine. “I got lucky, a window seat.”

Al Kontar, who was set to head up to Whistler, where a bed and some piles of fresh clothes await him, said he wants to do his best in Canada.

“In Canada, here you have something very special, you have an amazing group of people who believe they can make a difference, and they can.”

Looking right at Cooper, he said “When I was thinking of hope, her face was coming to my mind,” he said.

“There are so many things I want to say to you.”

And then it was time for Al Kontar to pile into a car with his small black suitcase, all his belongings in the world, and head up the twisting highway to his new home. He’ll initially be living with Cooper and has also been offered a full-time job at a Whistler hotel.

“I will be fine,” he said, almost to himself, before stepping into a torrential downpour, his first time outside in nine months.