The husband of a cancer nurse who lost her battle with the disease has posted a heartbreaking tribute to his ‘angel’.

Her husband Paul was by her side when she passed away and later wrote on Facebook calling Mrs Harris ‘my wife, my soulmate, my love, my everything’.

The mother-of-two, who was originally from Baltimore, dedicated her life to caring for cancer patients before being diagnosed with stage four bowel tumours last year.

After initially being given just three months to live, Mrs Harris was told she had entered remission in August after fundraising nearly £100,000 for a drug that is not available on the NHS.

Sadly, however, her health started to decline again in October. 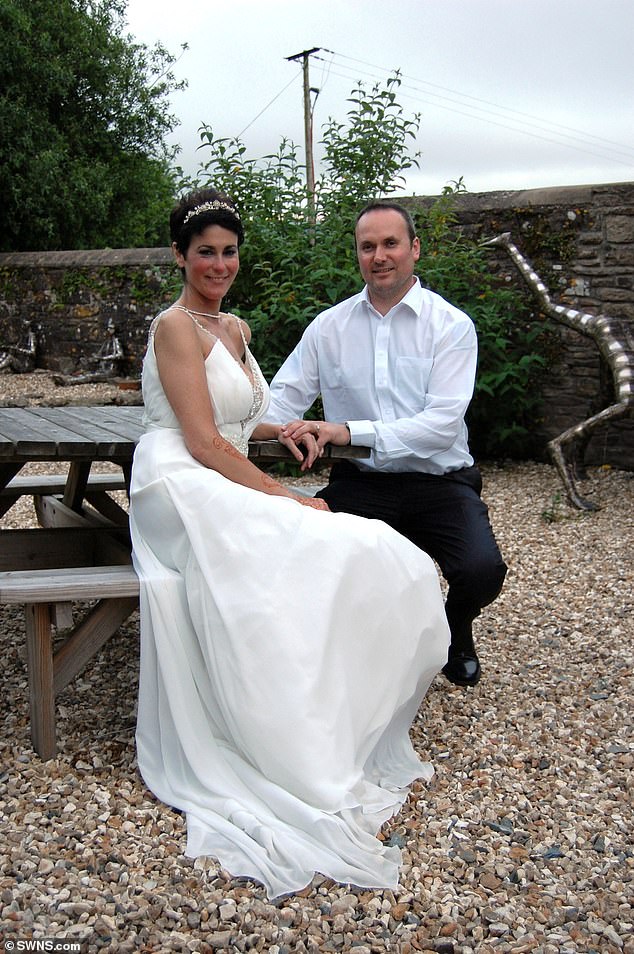 Oncology nurse Laura Harris died on Wednesday morning after a battle with bowel cancer. She is pictured on her wedding day in May last year with her husband Paul. He was by her side when his ‘angel’ passed away and has since posted a Facebook tribute to his ‘soulmate’ 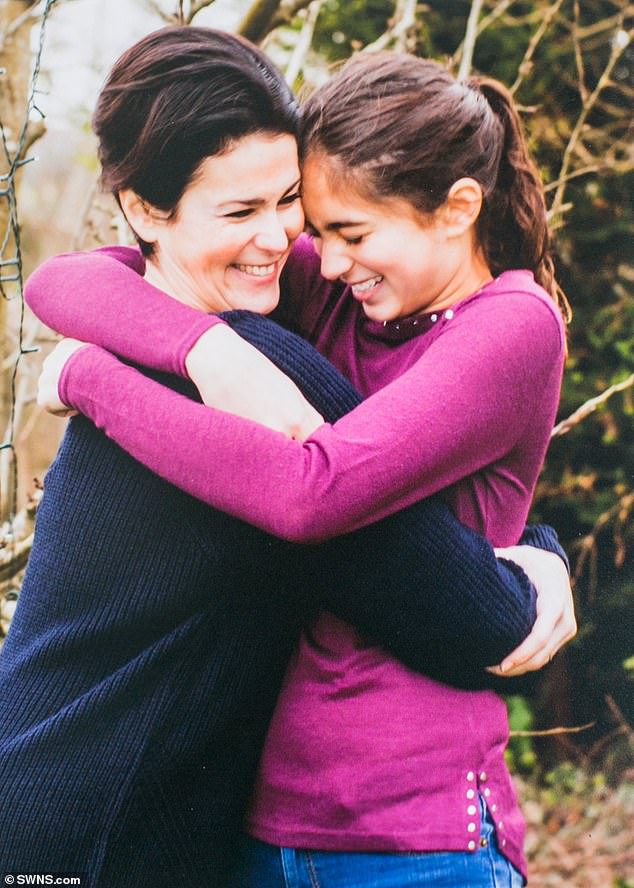 As well as her husband, Ms Harris leaves behind her 13-year-old daughter Molly (pictured in January last year), as well as her son Noah, 16, and eight-year-old stepson Zach 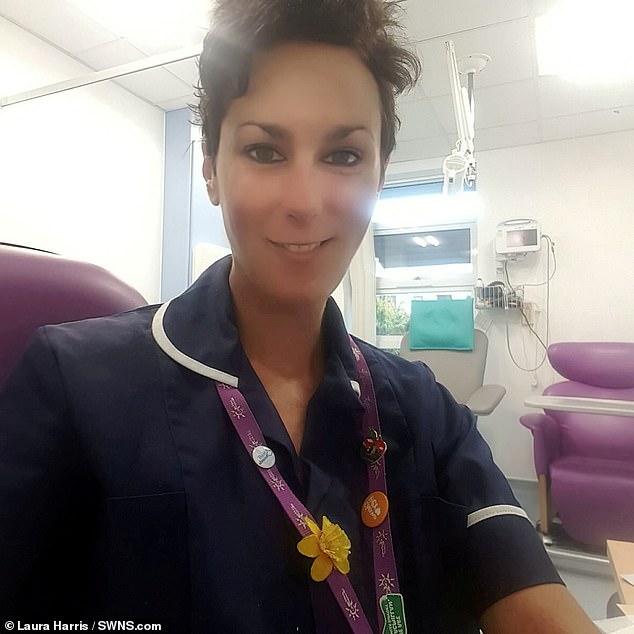 Mrs Harris dedicated her life to caring for cancer patients. She is pictured at work at the Seamoor Unit, Devon, where she also received her treatment

‘I have never been one to post messages to you on Facebook, I never felt the need, because I had the honour of your company and time my love,’ Paul wrote.

‘Tonight however I want you, and the countless people that you have made a mark on, in your beautiful way in this world to know that I am here, I’ll be whispering in your ear and holding your hand until you are ready to take to the wind my Angel.

The pair wed on May 27 last year in a service at their home, with a marquee in the garden for the ceremony, in a celebration organised for them by family and friends.

They moved the day forward due to Mrs Harris’ poor health.

She walked down the aisle to November Rain by Guns N’ Roses, with the newly-married couple travelling to London to see the band live for their honeymoon.

As well as her husband, Mrs Harris leaves behind her children 16-year-old Noah and 13-year-old Molly, and eight-year-old stepson Zach. 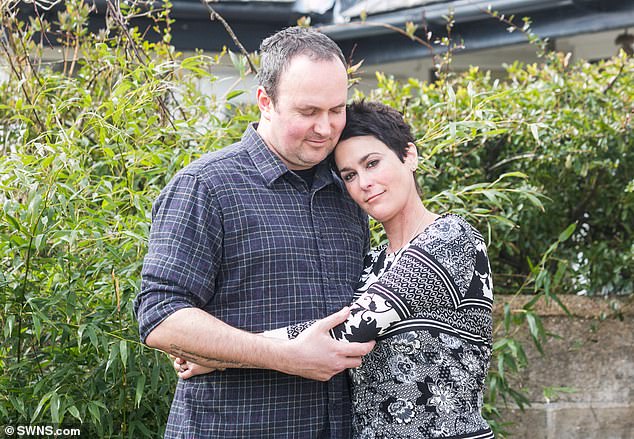 Pictured at their home in Barnstaple, Devon, Paul said he never felt the need to post about Mrs Harris’ illness before due to him having the ‘honour of her company and love’. Speaking to his late wife, Paul added he would be ‘whispering in your ear and holding your hand’ 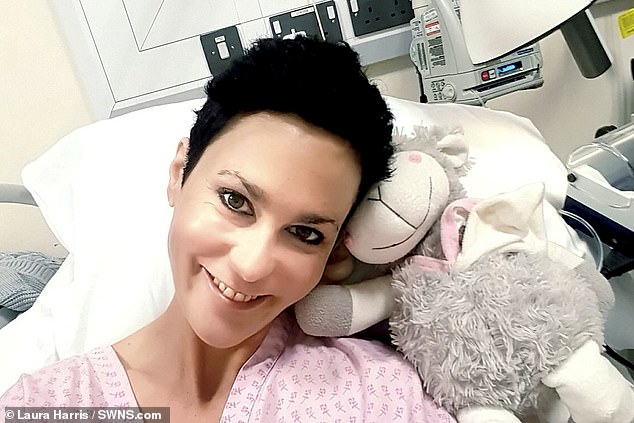 Pictured receiving treatment, Mrs Harris was told she had entered remission in August, however, her health took a turn for the worse in October. Writing on her fundraising page, one of the last posts she sent to her followers was that she was ‘fighting hard’ 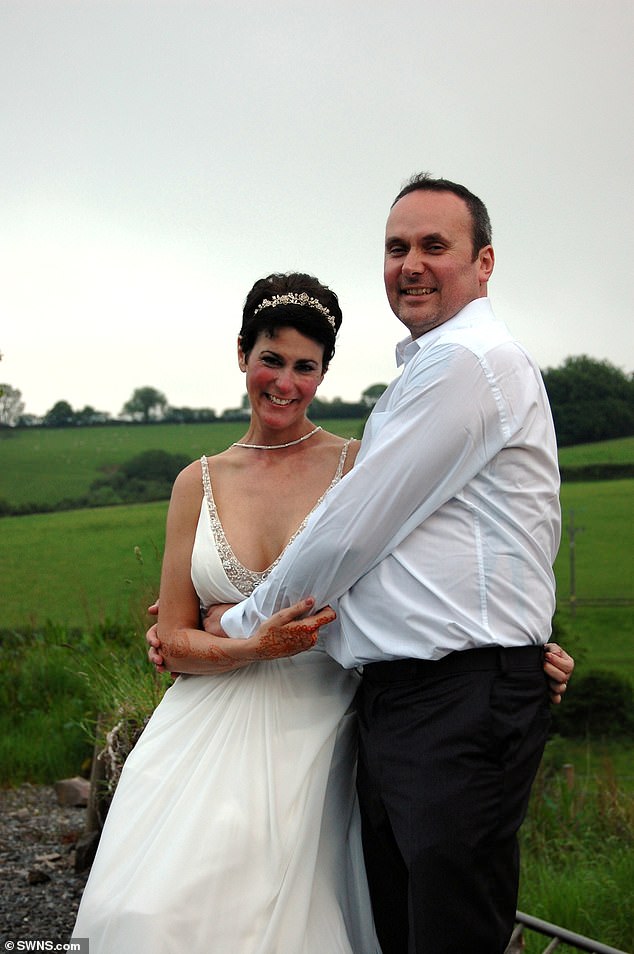 The couple married in a service at their home, with a marquee in their back garden. The day was organised by their friends and family, and involved Mrs Harris walking down the aisle to November Rain by Guns N’ Roses. They then saw the band on their honeymoon in London 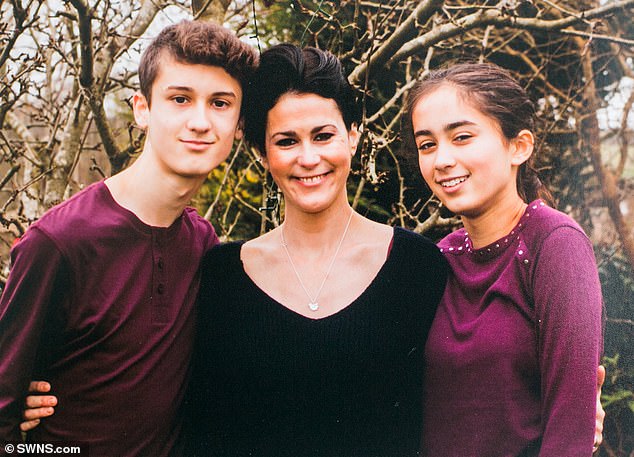 Pictured in January last year with her children, Mrs Harris found herself back in hospital in the days before she passed away. But that didn’t stop her ticking something off her bucket list and taking daughter Molly to see her favourite group the Korean band BTS just three weeks ago

After fundraising enough for five rounds of the £21,000 drug Bevacizumab, which is not available on the NHS due to its cost, Mrs Harris was told she had entered remission.

Thanking her followers for ‘saving my life’, she told them her cancer was inactive, with scans making it look like her lungs ‘never had cancer in them’.

Mrs Harris, who came to the UK 20 years ago and qualified as a cancer nurse in 2006, said at the time she was ‘blown away’ by her ‘recovery’.

Paul even said he was breathing ‘a huge sigh of relief’.

Just 11 days ago, she wrote on her fundraising page: ‘I hope to be fighting fit and right back with you soon! Meanwhile I’m playing poke with the canckles! All this lv fluid has given me Thunder thighs.’

In her final post a few days later, she said she was back in hospital but ‘fighting hard’.

Her husband then confirmed Mrs Harris had passed.

Despite her ordeal, she never failed to keep a brave face, giving an often comical commentary of her treatment to her hundreds of followers on Facebook.

Just three weeks ago, she even ticked something off her bucket list when she accompanied her daughter Molly to her first ever concert to see her favourite group the Korean band BTS. 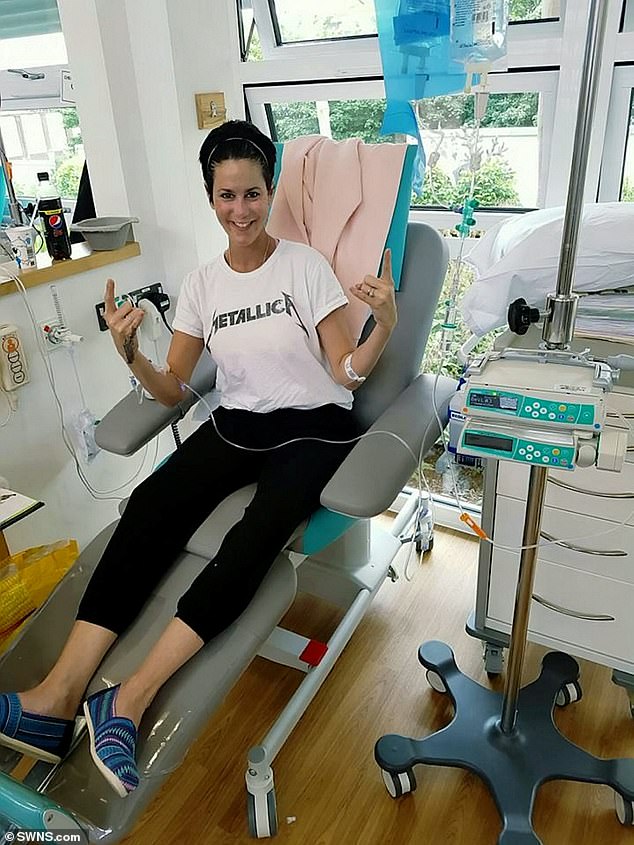 Pictured having treatment in hospital, Mrs Harris maintained her sense of humour throughout and would often post lighthearted comments on her fundraising page and Facebook 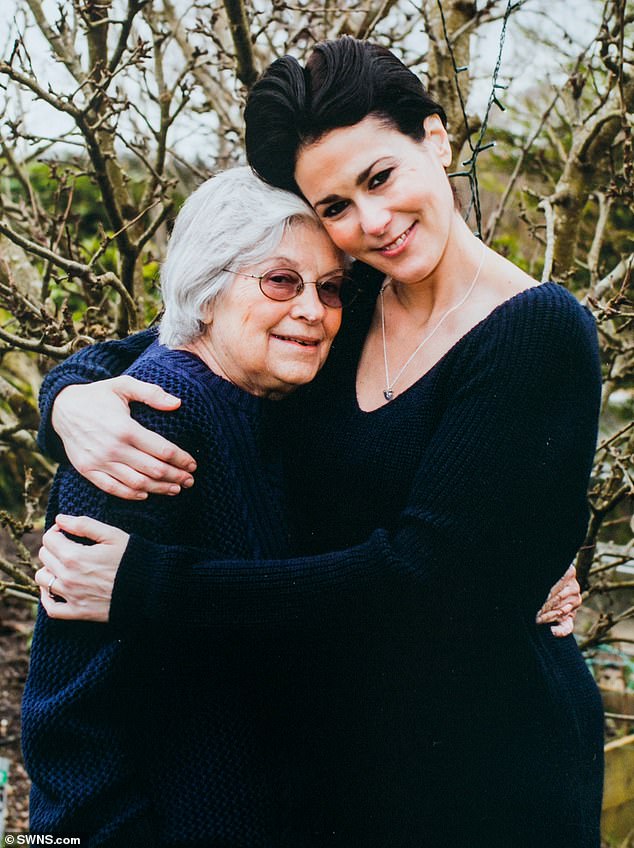 Originally from Baltimore, Mrs Harris is pictured with her mother 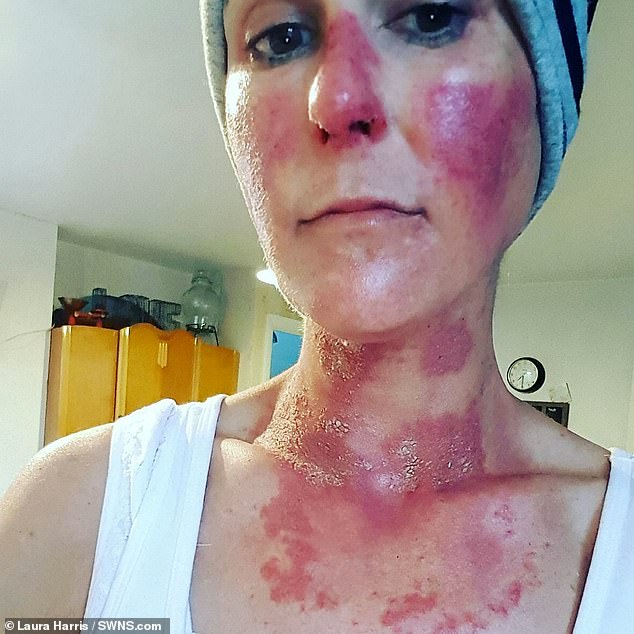 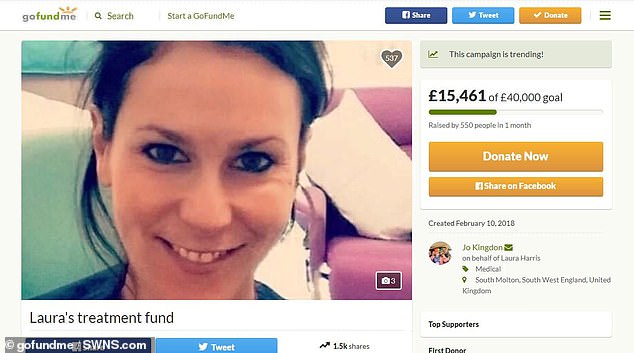 Mrs Harris required treatment that was not available on the NHS. After setting up a fundraising page that went viral, well wishers donated nearly £100,000 – smashing her £40,000 target

In her light-hearted posts, Mrs Harris was full of praise for the staff at the Seamoor Unit, where she both worked as a nurse and received her own treatment, as well as those at the North Devon Hospice.

She also continually praised her family for being by her side and thanked her followers, who she nicknamed ‘Team Lanky Yankee’.

Speaking during Bowel Cancer Awareness Week in April, Laura told the Gazette: ‘As a nurse I have seen a big variation in the age of bowel cancer patients, from much younger than me to much older.

‘The good thing is people in the more advanced stages are living longer nowadays.

‘People lead busy lives and it’s easy to put things off or not notice how long these symptoms have been going on for.

‘But if we can break the taboo of talking about it, we can catch it earlier.’

Laura was a staunch supporter of the £1.5million appeal to build a new cancer and wellbeing centre at North Devon District Hospital.

And after her fundraising appeal, she said she was ‘blown away’ by the support and would never be able to find the words to thank everyone who donated.

She hoped any leftover funds would be donated to cancer charities and other people who are crowdfunding for their own treatment.

WHAT IS BOWEL CANCER?

Bowel, or colorectal, cancer affects the large bowel, which is made up of the colon and rectum.

Most cases have no clear cause, however, people are more at risk if they:

More than nine out of 10 people with stage one bowel cancer survive five years or more after their diagnosis.

This drops significantly if it is diagnosed in later stages.

According to Bowel Cancer UK figures, more than 41,200 people are diagnosed with bowel cancer every year in the UK.

It affects around 40 per 100,000 adults per year in the US, according to the National Cancer Institute.