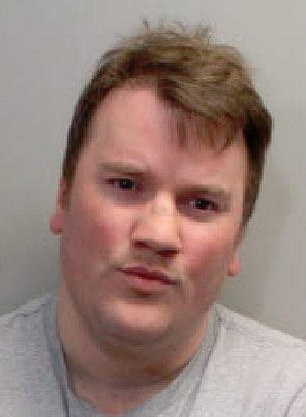 The gunman who opened fire at a hot yoga studio in Tallahassee, killing two people and wounding five others before turning the gun on himself, has been identified.

Tallahassee Police Chief Michael DeLeo said Friday night that the gunman shot six people and pistol-whipped one other before fatally shooting himself. The conditions of the other victims are unclear.

The shooter was identified by police as 40-year-old Scott Paul Beierle. The two victims who were shot dead have been named as Dr. Nancy Van Vessem, 61, and Maura Binkley, 21.

City spokeswoman Jamie Van Pelt, said the shooting at Hot Yoga Tallahassee around 5.30pm appeared to be a part of a domestic dispute.

Capital Health Plan said in a statement: ‘Our Capital Health Plan family is deeply shocked and saddened about the tragic loss of our beloved friend and colleague, Dr. Nancy Van Vessem, among the other victims of this terrible incident.

‘As CHP’s longtime chief medical director, Nancy has been a guiding, visionary force in our daily work to serve the wellness and health care needs of thousands of families in this community.

‘Her dedication, caring, leadership, humanity, and experience made her one of the most respected, inspiring, and accomplished medical professionals in the state and country. Our hearts are filled with sorrow and prayers for her family. We all have been so blessed to have Nancy in our lives.’ 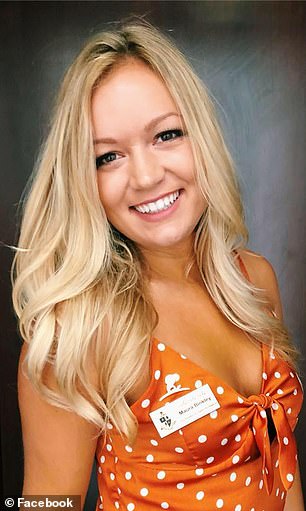 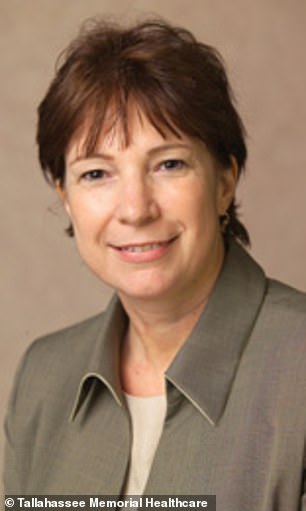 The two victims who were shot dead have been named as Maura Binkley, 21, (left) and Dr. Nancy Van Vessem, 61 (right)

Binkley was a student at Florida State University and Dr Van Vessem was a faculty member.

University President John Thrasher said in a statement: ‘There are no words to express the shock and grief we feel after learning of the deaths of Maura Binkley and Dr. Nancy Van Vessem.

‘To lose one of our students and one of our faculty members in this tragic and violent way is just devastating to the Florida State University family. We feel this loss profoundly and we send our deepest sympathies to Maura’s and Nancy’s loved ones while we pray for the recovery of those who were injured.’

Witness Alex Redding told the Tallahassee Democrat a woman ran into the bar downstairs, followed by a man with blood on his head.

He said two to three other people sought help in Bar at Betton, and they told him a tall man with a beard was acting strangely in the studio and then began shooting. 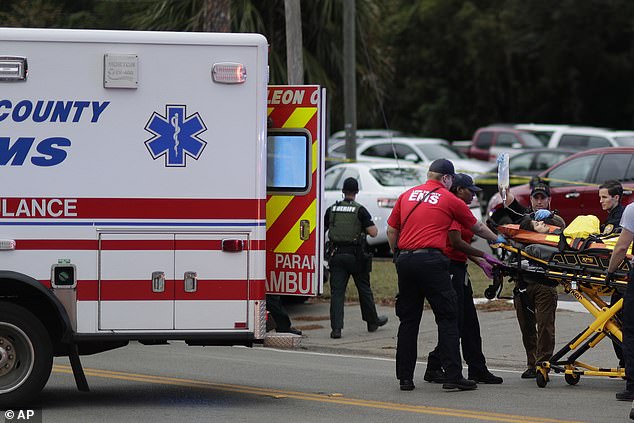 A person is seen being transported from scene of a shooting in Tallahassee, Florida on Friday 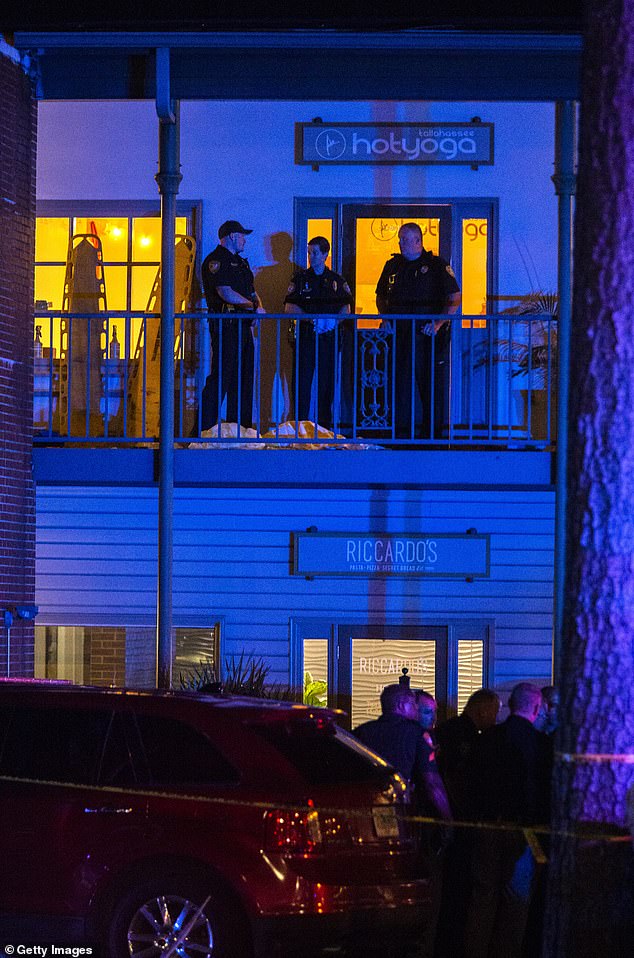 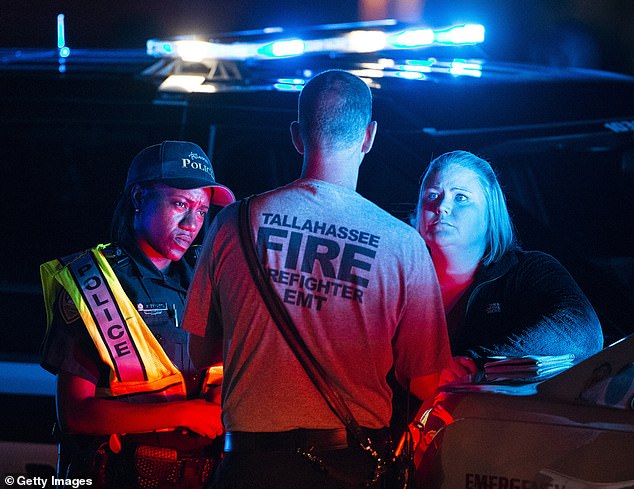 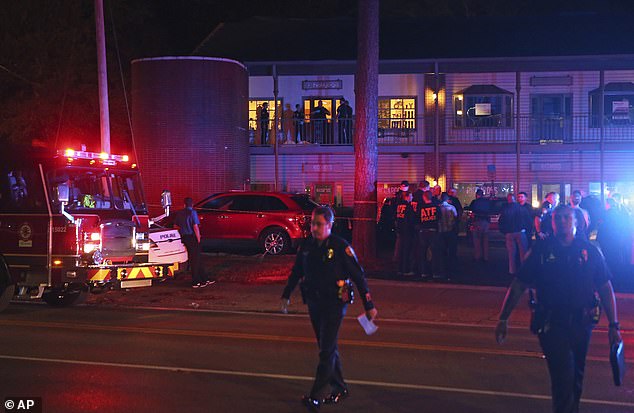 The man with blood on his head told Redding he tried to stop the shooter but was pistol-whipped before the gunman killed himself.

State Rep. Kristin Jacobs was also in the bar and witnessed the aftermath of the shooting.

‘… a girl ran into the bar,’ she said. ‘She could hardly talk. She was hyperventilating. I heard her say shooter. Two other women came in, and I kept hearing the word “Shooter”.’

Jacobs said of the man who was pistol-whipped: ‘Many people are alive because this guy rushed the shooter.’

Megan Nixon told the Tallahassee Democrat she was eating at Riccardo’s Restaurant downstairs when the gunman opened fire.

She said: ‘We heard pop, pop, pop. It sounded intense. It didn’t sound like gunshots.’

Melissa Hutchinson said she helped treat a ‘profusely’ bleeding man who rushed into a bar after the incident. She said three people from the studio ran in, and they were told there was an active shooter. 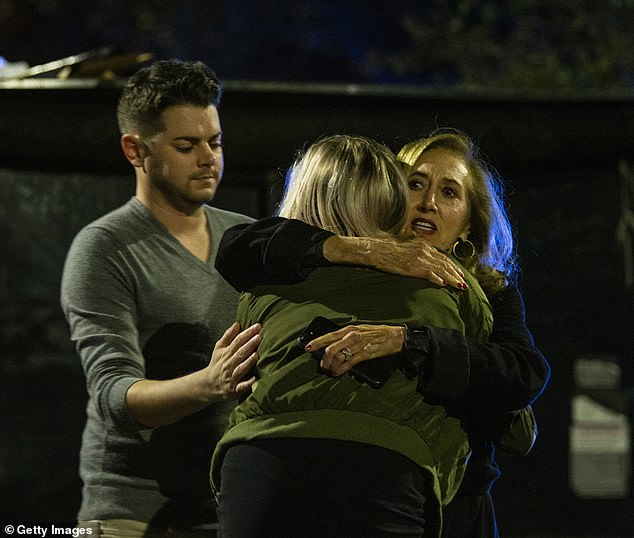 Matthew Rodin, left and Susan Turner comfort Melissa Hutchinson who rendered aid to some of the victims of a mass shooting 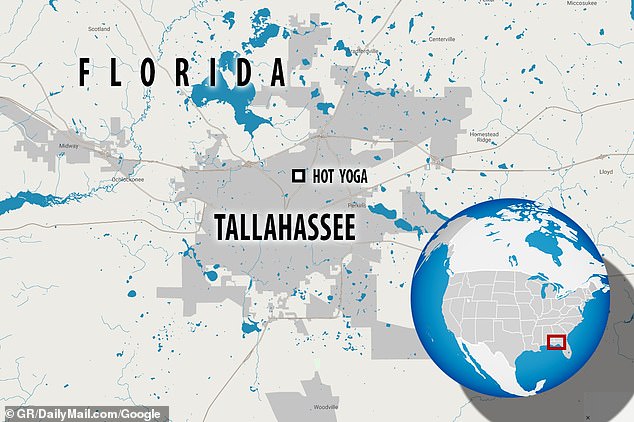 ‘It was a shocking moment something happened like this,’ Hutchinson said.

The people who came in were injured, including the bleeding man who was pistol-whipped while trying to stop the shooter. They told her the shooter kept coming in and out of the studio. When he loaded his gun, people started pounding the windows of the studio to warn people.

Erskin Wesson, 64, said he was eating dinner with his family at a restaurant below the yoga studio when they heard the gunshots above them.

‘We just heard “pow, pow, pow, pow,”‘ Wesson said. ‘It sounded like a limb falling on a tin roof and rolling.’

The restaurant’s owner came by a short time later, asking if anyone was a doctor, Wesson said. His step-daughter is an emergency room nurse and helped paramedics for about an hour, he said.

There were 11 people signed up for the 5.30pm class, local media reports.

Tallahassee Mayor Andrew Gillum, who is the Democratic nominee for governor, tweeted that he’s breaking off the campaign trail to return to Tallahassee. 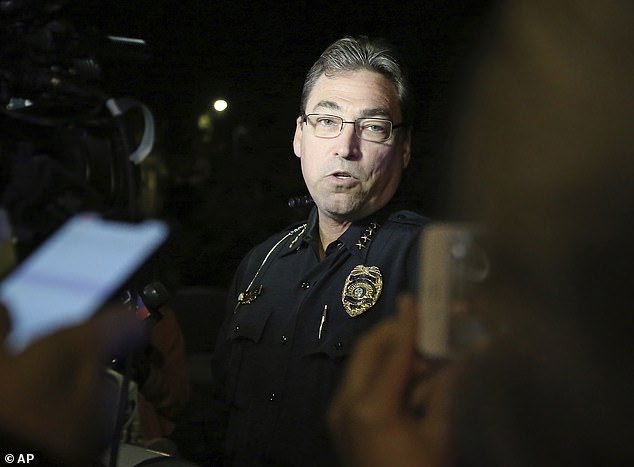 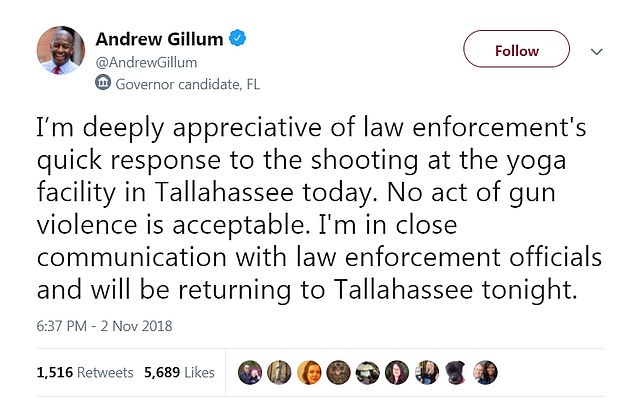 He wrote: ‘I’m deeply appreciative of law enforcement’s quick response to the shooting at the yoga facility in Tallahassee today.

‘No act of gun violence is acceptable. I’m in close communication with law enforcement officials and will be returning to Tallahassee tonight.’

Late Friday night, after earlier appeared at a campaign event with former President Barack Obama, Gillum spoke to reporters near the scene of the shooting to say that he had visited in the hospital two people who were shot at the studio. The mayor said they were in good spirits despite their injuries.

Gillum asked residents to pray for those who survived and those who were killed in the shooting.

‘We all feel a sense of added vulnerability’ because of the shooting, the mayor said.

City Commissioner Scott Maddox wrote on Facebook: ‘In my public service career I have had to be on some bad scenes. This is the worst. Please pray.’

Republican Gov. Rick Scott, who is challenging Democratic Sen. Bill Nelson, called DeLeo and the head of the Florida Department of Law Enforcement to get details of the shooting.

‘I will remain in constant communication with law enforcement. We have offered state assistance,’ Scott tweeted.

The plaza where the shooting took place is home to popular restaurants, a jewelry store, a framing shop, a hair salon and other businesses. 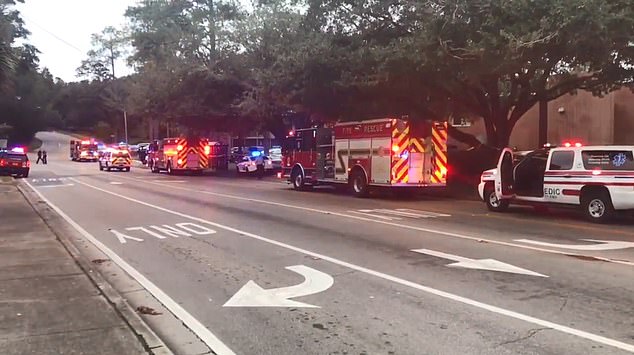 City spokeswoman Alison Faris told news outlets that the suspect fatally shot himself. Emergency services are seen at the scene of the shooting 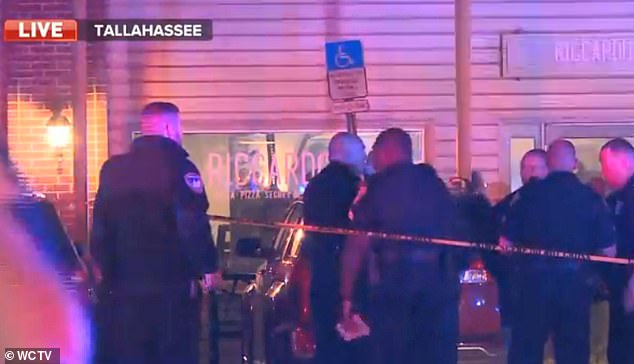 Police officers are seen at the scene of the shooting in Tallahassee, Florida on Friday night 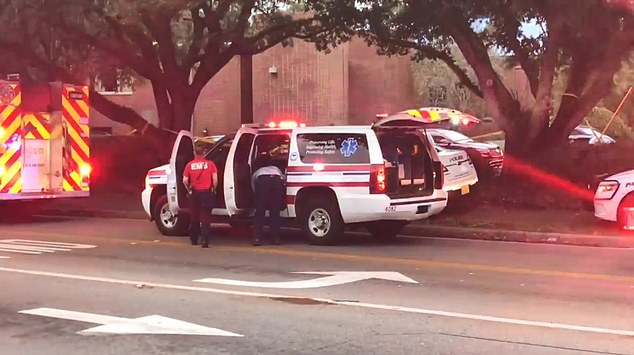 The shooting Friday was in a small shopping center in Florida’s capital city. Police cars and ambulances were on the scene