Thousands of General Motors assembly plant workers in Oshawa, Ont., halted production this morning before hearing the devastating news that the automaker plans to close the facility in 2019 as part of a global restructuring plan.

It’s not clear how many of the 2,500 employees will lose their jobs under the sweeping strategy, which aims to lower carbon emissions and prepare for a future of electric and autonomous vehicles.

When GM confirmed the closure Monday of the plant in Oshawa, which is about 60 kilometres east of Toronto, it said it is exploring options to retool the facility.

Mary Barra, GM’s chair and CEO, said from Detroit that the action to transform its product line and manufacturing process will save the company an estimated $6 billion by 2020.

“This industry is changing very rapidly when you look at all of the transformative technology — be it propulsion, autonomous driving, connectivity sharing — and we want to make sure we’re well positioned,” she said.

The plan will put GM in a “more agile, resilient and profitable” position for long-term success, she said, noting it will slash salaried and salaried contract staff by 15 per cent. This includes 25 per cent fewer executives.

Unifor, the union representing autoworkers in Oshawa, said late Sunday it has not heard “complete details of the overall announcement,” but was told no vehicles are set to be assembled at the facility past December 2019.

The union will hold talks with GM on Monday afternoon. Premier Doug Ford is also expected to comment on the situation when he’s at Queen’s Park before noon.

The Detroit-based automaker had been quiet on the expected move since news broke Sunday evening.

But Barra revealed during a morning news conference in Detroit that GM would be terminating production at the Oshawa assembly plant, along with two other complexes in the United States — Detroit and Warren, Ohio.

“This industry is changing very rapidly and we want to make sure we’re well positioned,” Barra told reporters, noting the automaker will be focusing on its future through investment in autonomous and electric vehicles.

GM has yet to set a timetable for the production halt at the Oshawa plant, but confirmed it will take place sometime in 2019.

Workers inside the plant stopped production shortly before 9 a.m. ET.

Zachary Way, a new hire at the plant, was among those who walked off the production line in protest and is now anxiously awaiting a 2 p.m. meeting with the union.

Way told CBC News that the company has told him “basically nothing” at this point, although he’s already fearing the worst. If he is laid off, “it’ll be bad,” he said.

Way’s father and brother also work at the Oshawa plant, which he likened to the heart of the city. If it shuts down, Way said, he’s not sure how Oshawa will recover. He likened an empty plant to an “open wound.”

The Oshawa plant, where GM Canada has its headquarters, produces the Chevrolet Impala and the Cadillac XTS cars, the majority of which are shipped south of the border, along with the Chevrolet Silverado and GMC Sierra pickup trucks.

The complex is one of three GM manufacturing facilities in Ontario, along with St. Catharines and Ingersoll. 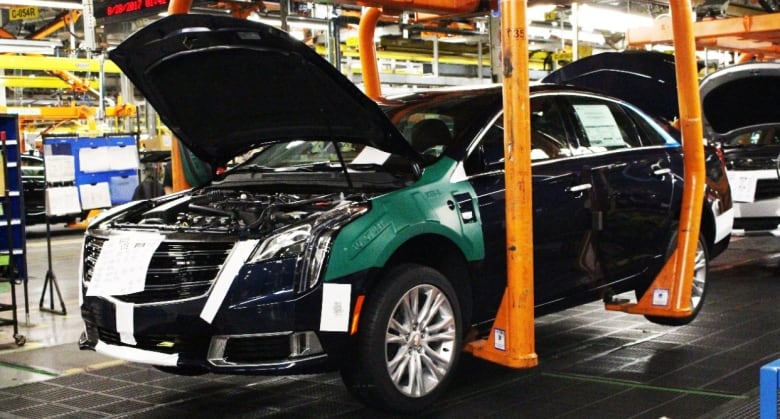 The plant was headed for closure in June this year amid a slump in sales of passenger cars in North America, and specifically the U.S., for the two cars built in Oshawa.

In late 2017, GM Canada reported a 17.2 per cent year-over-year drop in vehicle sales, while Canadian year-to-year sales were up 13.6 per cent thanks to strong numbers earlier that year.

Around the same time, the auto manufacturer restarted a truck assembly line and scaled back car production to address shifting American buyer preferences.

Last month, GM ramped up its cost-cutting efforts by offering buyouts to thousands of white-collar workers with 12 or more years of service in both Canada and the United States.

The company has said it needs to be smaller to prepare for possible tougher times.

‘It’s going to affect the province’

The assembly plant has formed the backbone of Oshawa’s economy for more than 100 years. GM bought the plant in 1953 from McLaughlin Buicks, making it one of the biggest in the world.

Initially, Oshawa Mayor John Henry had hoped news of the closure was “just a rumour,” but several hours after it made national headlines, he predicted “there’s more to this than what we know.”

“People are waiting for information. They want to know what their future is like,” he said.

“They deserve to know the answers and what is going on.”

Henry, who worked at the facility as a teen, claims a sombre mood is now blanketing the city because the economic ripple effect will send shockwaves beyond its workers and their families.

“This isn’t just about building cars,” he told CBC News on Monday, noting he had not yet spoken to anyone from GM.

Dozens of auto-parts businesses, as well as the companies that supply them, will also be affected. A wide array of local businesses, such as restaurants and retailers in Oshawa, could also feel the effects of the shutdown.

GM workers have been good for Oshawa, Henry noted, raising millions of dollars for charity like the local United Way, even during hard economic times.

“It’s going to change the spending habits in this community,” he said.

“And we thought with the recent investments that General Motors had made, that this plant was going to continue to produce vehicles for a long period of time.” 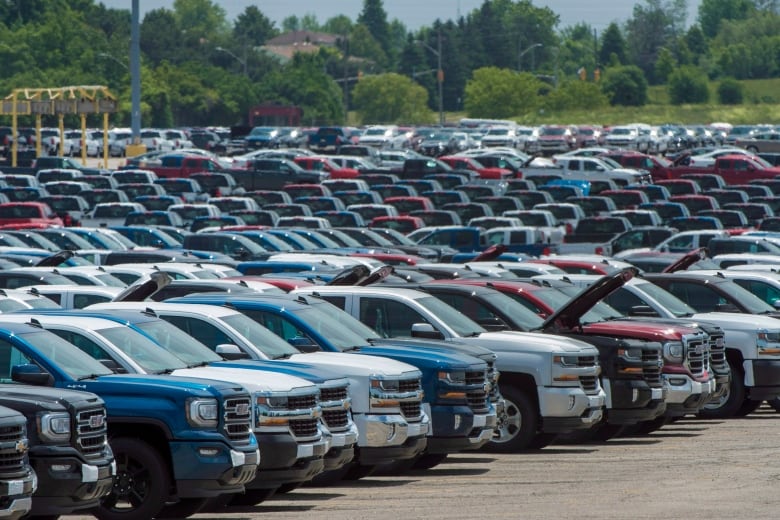 The Oshawa assembly plant, where GM Canada has its headquarters, produces the Chevrolet Impala and the Cadillac XTS cars, along with the Chevrolet Silverado and GMC Sierra pickup trucks. (Tijana Martin/Canadian Press)

Chris Buckley, president of the Ontario Federation of Labour, said the move is “absolutely shameful” and that GM should treat its workers better.

“General Motors should be disgusted on how they’re rewarding these members,” Buckley told CBC News.

For every job at the assembly plant, he explains, an additional nine jobs are created in the community.

“This is going to be absolutely devastating,” he said about the expected closure.

Oshawa NDP MPP Jennifer French also decried the looming closure, calling it a “callous decision that must be fought.”

“GM did not build Oshawa. Oshawa built GM,” French said in a statement on Sunday, noting the proposed layoffs would greatly impact workers and their families.

“Words cannot fully describe the anxiety that my community is feeling at this moment.”