U.S. President Donald Trump’s legal team had a simple, consistent message to sell for the last year and a half — only for one of Trump’s lawyers to blow it up by introducing his own line this week. With a sudden pivot on the question of collusion, former federal prosecutors said, Rudy Giuliani ended up legitimizing special counsel Robert Mueller’s investigation into Russian election meddling and whether Trump associates conspired.

Giuliani made his walkback on Wednesday night, telling CNN’s Chris Cuomo that he “never” contested that collusion may have occurred. Rather, Giuliani insisted, he merely denied that “the president of the United States” was involved.

Cuomo looked flabbergasted. The CNN host challenged that Giuliani had indeed stated in the past there was no collusion by the Trump campaign with the Russians.

“I never said there was no collusion between the campaign or between people in the campaign,” Giuliani claimed.

“No, I did not. I said the president of the United States” did not collude, Giuliani said.

The lawyer and former New York mayor’s latest attempt to recast the narrative on the Trump-Russia affair sounded to legal scholars like a bid to get ahead of a possible Trump impeachment in the House and imminent developments in Mueller’s investigation.

It was also perhaps the Trump legal team’s biggest concession yet that Mueller’s probe isn’t the “witch hunt” they’ve claimed. The admission that collusion may have occurred in any form was a startling departure. Trump himself has tweeted dozens of times there was “no collusion” — period, including by campaign associates.

In a widely cited July 2018 interview with Fox News contributor Guy Benson, Giuliani was also asked directly: “Is it still the position of you and your client that there was no collusion with the Russians whatsoever on behalf of the Trump campaign?”

“But it also means this whole trash-talking of the last year and a half of the Mueller probe as a ‘witch hunt’ has to completely fold up shop now,” he said.

“Because from this basic concession, there’s certainly no ‘witch hunt’ now. How can you not seriously go after what you concede is a collusion between the highest members of the campaign — maybe just not the candidate — and a hostile foreign nation?”

In other words, rather than try to dismiss Mueller’s probe, Giuliani only served to validate it.

(In a statement issued Thursday, Giuliani rephrased his position again. “I can only speak of what I know, and that is that I have no knowledge that anyone on the campaign illegally colluded with Russia,” he said.)

There is No Collusion! The Robert Mueller Rigged Witch Hunt, headed now by 17 (increased from 13, including an Obama White House lawyer) Angry Democrats, was started by a fraudulent Dossier, paid for by Crooked Hillary and the DNC. Therefore, the Witch Hunt is an illegal Scam!

As for what provoked his comments on CNN in the first place? It’s possible he’s preparing for potential criminal charges against Trump associates as the special counsel probe racks up more convictions and guilty pleas, said Julie Grohovsky, a former federal prosecutor who worked in Mueller’s office at the U.S. Attorney’s Office in D.C.

“He’s having to shift his position to deal with reality, which is people on the campaign have pled guilty, or been found guilty” for various crimes, she said.

Giuliani may be expecting a cascade of damaging new evidence in the coming weeks that might point to collusion.

He has established a pattern of moving the goal posts at interesting times.

Last May, he appeared to surprise Fox News presenter Sean Hannity when he suddenly revealed that Trump had repaid hix fixer Michael Cohen the $130,000 that Cohen had paid in hush money to Stormy Daniels, the pornographic actress who alleges she had an affair with Trump.

Trump had previously claimed he had no idea Cohen made the payment. 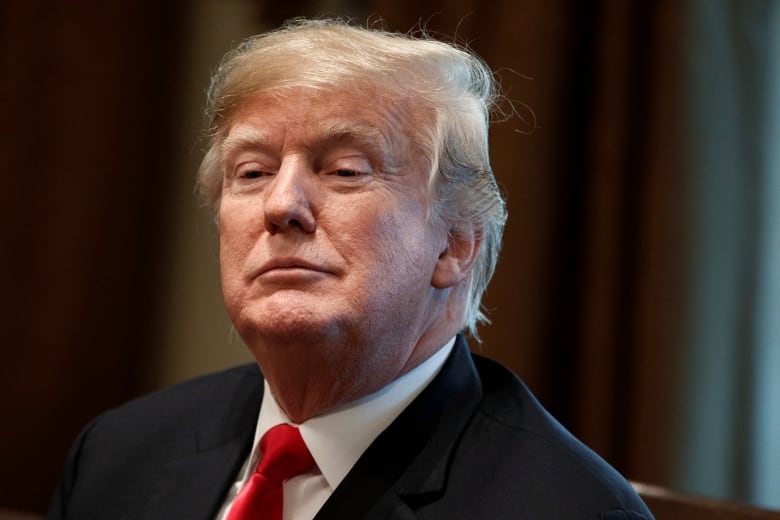 Trump listens during a meeting in the Cabinet Room of the White House in Washington on Dec. 13. Trump himself has tweeted dozens of times there was ‘no collusion,’ including by campaign associates. (Evan Vucci/Associated Press)

Giuliani might have good reason to try to change the collusion narrative, given what’s expected to come. He has reportedly said he expects Mueller’s findings to be “horrific” for Trump.

Cohen has since flipped on the president, pleading guilty last year to lying to Congress, as well as to committing campaign finance violations and financial crimes. He began co-operating with Mueller’s team and is due next month to testify before Congress.

Trump’s ex-campaign manager Paul Manafort, who pleaded guilty in September on financial charges, is alleged to have shared 2016 polling data with Konstantin Kilimnik, who has ties with Russian intelligence.

And Mueller’s team this week filed nearly 200 pages of new material on Manafort.

“Certainly it’s a strategy to try to lessen the blow of the information hitting the press,” Grohovsky said.

He might even be girding the president in the event of impeachment, offering Republican senators more justification to vote not to convict him in the Senate, should that scenario arise. 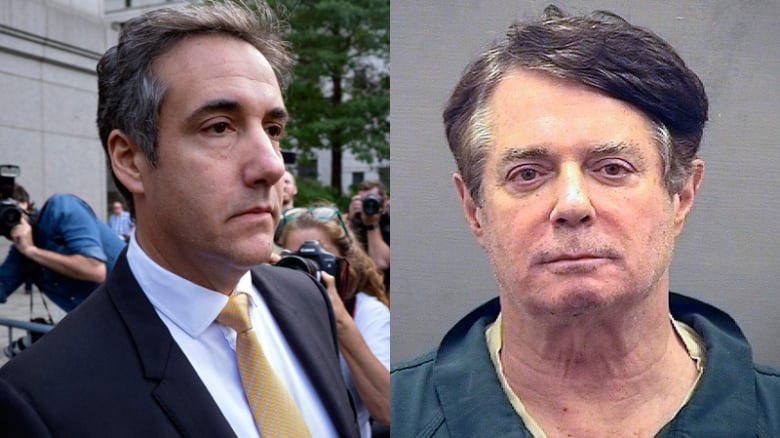 Michael Cohen, Trump’s former personal lawyer, left, is due to testify before Congress next month. Former campaign manager Paul Manafort had agreed to co-operate, but it was recently revealed that deal had fallen through. (Craig Ruttle/Alexandria Detention Center/Associated Press )

“It is possible that Giuliani’s efforts to distance Trump from Manafort and others is not only based on a fear of a criminal prosecution, but also about giving GOP politicians room to avoid calling for impeachment and removal,” former Southern District of New York federal prosecutor Harry Sandick wrote in an email.

At the same time, the decision to wall off the president from collusion accusations while leaving his associates — including his own family members — vulnerable could spell trouble for people like Manafort.

As Sandick noted: “Trump continues to say what a fine person Manafort is — a position that is hard to reconcile with a defense that blames Manafort as a greedy person who violated the law.”

Insulating the president from possible inculpatory material appears to be Giuliani’s ultimate strategy for now. And that may require admitting that collusion may have taken place after all.

To Litman, there’s an irony there, given how the White House has attacked Mueller’s mission.

“It’s a real concession to the probe’s overall legitimacy,” he said.