Prime Minister Theresa May is set to unveil her new plan to break Britain’s Brexit deadlock — and it’s expected to look a lot like the old plan decisively rejected by Parliament last week.

May is scheduled to brief the House of Commons on Monday afternoon on how she plans to proceed. There are few signs she will make radical changes to her deal, though she may seek alterations to its most contentious section: an insurance policy known as the “backstop” that is intended to guarantee there are no customs checks along the Irish border.

But the EU insists it will not renegotiate the withdrawal agreement. Several EU foreign ministers said Monday that reopening the deal was out of the question.

“This is the text we all invested ourselves in,” Austrian Foreign Minister Karin Kneissl said as she arrived for a meeting in Brussels.

May also faces a battle from groups of British lawmakers who are trying to use parliamentary rules and amendments to rule out the possibility of Britain leaving the EU without a deal.

Lawmakers are due to vote on May’s “Plan B,” and possible amendments, on Jan. 29, two months before Britain is due to leave the EU on March 29.

Britain and the EU sealed a divorce deal in November after months of tense negotiations. But the agreement has been rejected by both sides of Britain’s divide over Europe.

Brexit-backing lawmakers say it will leave the U.K. tethered to the EU’s rules and unable to forge an independent trade policy.

Pro-EU MPs argue it is inferior to the frictionless economic relationship Britain currently enjoys as an member of the bloc.

After her deal was thrown out last week by a 432-202 vote in Parliament, May said she would consult with lawmakers from all parties to find a new way forward. 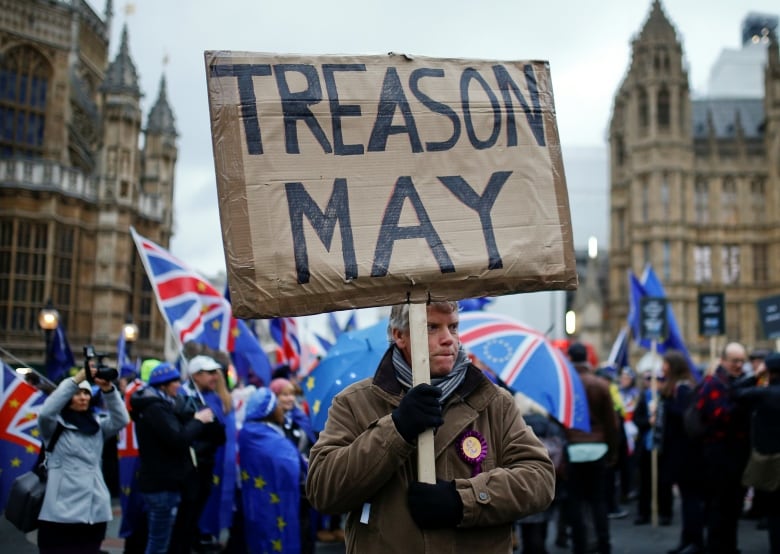 A pro-Brexit protester holds a banner outside the Houses of Parliament on Jan. 15, ahead of a vote in the House of Commons on May’s Brexit deal. MPs resoundingly rejected the deal 432-202. (Henry Nicholls/Reuters)

But Labour Party Leader Jeremy Corbyn called the cross-party meetings a “stunt,” and other opposition leaders said the prime minister did not heed their entreaties to rule out a “no-deal” Brexit and retain close economic ties with the EU.

Instead, May looks set to try to win over pro-Brexit Conservatives and her party’s Northern Irish ally, the Democratic Unionist Party. Both groups say they will not back the deal unless the border backstop is removed.

Crashing out of the EU?

Britain’s political impasse over Brexit is fuelling concerns that the country may crash out of the EU on March 29 with no agreement in place to cushion the shock.

That could see tariffs imposed on goods moving between Britain and the EU, sparking logjams at ports and shortages of essential supplies.

Labour Party Brexit spokesperson Keir Starmer said Sunday a no-deal Brexit would be “catastrophic,” and it was “inevitable” Britain will have to ask the EU to extend the two-year countdown to exit. 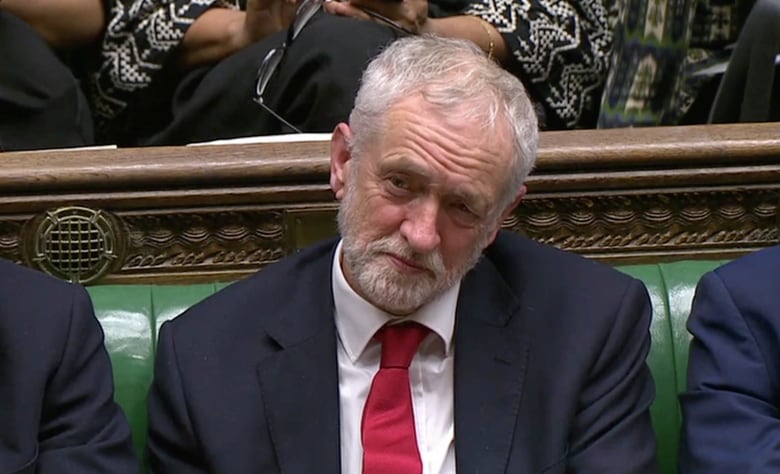 Labour Leader Jeremy Corbyn said the meetings held between May and opposition party leaders since last week’s vote were a ‘stunt’ aimed at creating the appearance of co-operation between the parties. (Reuters TV/Reuters)

Labour lawmaker Yvette Cooper — part of a group of lawmakers trying to rule out a “no-deal” Brexit — said May was shirking her responsibility to the country.

“I think she knows that she should rule out ‘no deal’ in the national interest because it would be so damaging,” Cooper told the BBC. “She’s refusing to do so, and I think she’s hoping that Parliament will do this for her. That is not leadership.”

“We now know what they don’t want in London,” German Foreign Minister Heiko Maas said. “Now we must at last find out what they want.”