Bearing glossy red fruit, phrases like “Canada Choice” or “prepared in Canada,” and other subtle hints, the packaging on apple juice gives Canadian consumers the impression they’re drinking apples from this country.

Don’t let those labels fool you: Most of the juice found on grocery store shelves is made from cheaper foreign apple concentrate that’s been flooding into the Canadian market over the last few decades.

Consumers are at least partly in the dark because Canadian juice-makers don’t have to list the origins of their ingredients under Canada’s food labelling rules — and the government agency that controls labelling has no plans to change that policy in the near future.

“I think there would be a lot of people feeling really deceived if they knew the whole story. But right now, you can’t get the whole story,” said Brett Schuyler, co-owner of Schuyler Farms, one of Ontario’s largest apple orchards. “You look at the product: How do you know where it’s from?” 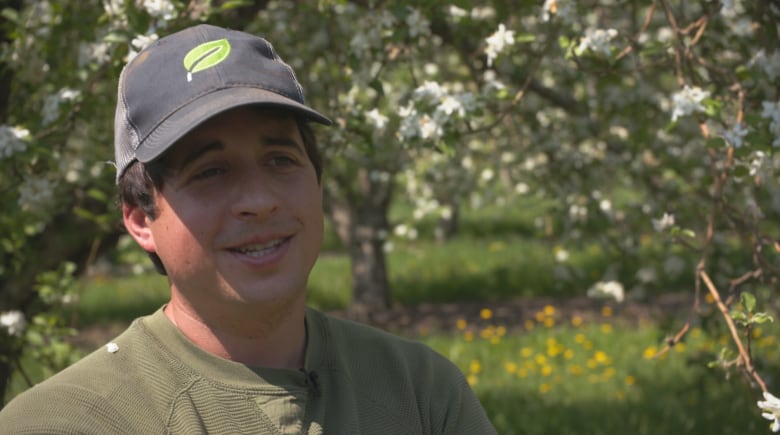 Brett Schuyler, co-owner of Schuyler Farms in southern Ontario, would like Canadian consumers to know where the apples that go into their juice come from. But he says it’s often hard to tell under our country’s current labelling system. (Norm Arnold/CBC)

In a given year, Schuyler will produce 4,500 tonnes of apples in a dozen varieties. But he estimates that less than five per cent of his harvest ends up in cartons of apple juice sold on store shelves in Canada.

Marketplace reviewed the labels of about two dozen apple juices produced by large-scale Canadian juice-makers and stocked by major grocery stores — and found a handful that advertise they are made with Canadian apples, including Graves McIntosh Apple, Oasis Classic (not from concentrate) and Tropicana Pure Premium (1.75 litre).

(A few others indicate they consist of “domestic and imported ingredients” but provide no other details.) 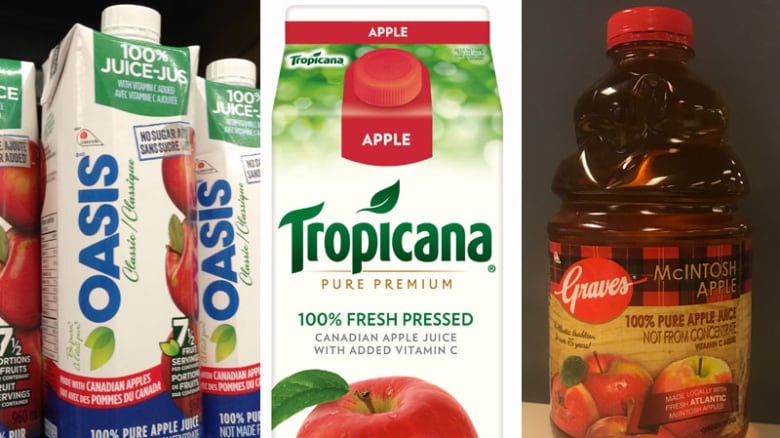 Marketplace reviewed the labels of about two dozen apple juices produced by major Canadian juice-makers, and found just a handful that advertise they are made with Canadian apples, including Oasis Classic (not from concentrate), Tropicana Pure Premium (1.75 litre) and Graves McIntosh Apple. But other products made by these same companies contain ingredients from outside the country. (CBC and Tropicana.ca)

It’s a different story south of the border, where since 1987, U.S. Customs has insisted that manufacturers indicate country of origin on their juice labels.

So while a Minute Maid juice box packaged and sold in Canada does not include any country information about its ingredients, its American counterpart clearly states “contains apple juice concentrate from the U.S.A., Argentina, Chile, China, and Turkey.” 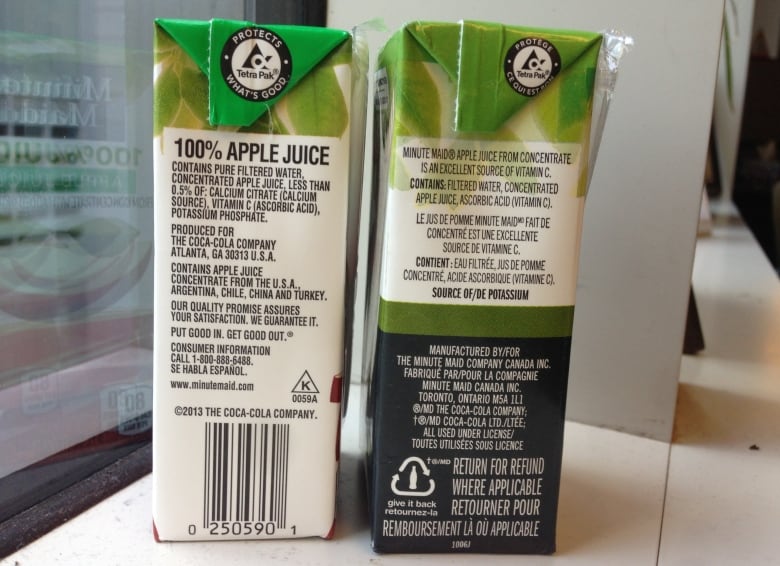 A Minute Maid juicebox produced in the U.S., shown at left, lists the country-of-origin details. But the Canadian equivalent, shown at right, does not. (CBC)

It’s that kind of transparency Schuyler says is missing from Canadian shelves.

“It is a great example, looking at what they’ve done in the States to just put it on the label. Clear country of origin labelling would be a very good thing to see in Canada,” he said.

Food lawyer Glenford Jameson, who works with companies to ensure their labels meet Canadian standards, says country of origin requirements on juice is a “voluntary statement” in Canada.

“All you need to say is that it’s prepared in Canada,” he said. “And you can choose to say it’s prepared from imported or domestic ingredients — but you don’t necessarily have to spell out where it’s from.”

Apples from around the world

While apple juice labels aren’t legally required to list the country of origin, similar to a number of fruit and vegetable products prepared in Canada, the Canadian Food Inspection Agency (CFIA) does require the labels to include company information.

In an attempt to learn the source of apples for some of the most popular juice brands sold in Canada, Marketplace contacted the customer service departments of five different companies.

The agents we reached told Marketplace that their juices were produced with apple concentrate from China, Poland, Argentina, Chile, New Zealand and the U.S. as well as with “some” apples from Canada.

Marketplace asks consumers if they can tell the origins of a juice’s ingredients, based on the label:

Marketplace tests consumers on if they can tell the origins of the ingredients in their juice, based on the label. 0:39

With its massive orchards and cheap labour force, China has become the world’s largest producer of apple juice concentrate over the last few decades.

Apple concentrate is produced from apple juice that is boiled down into a thick liquid, packaged in plastic-lined steel drums and transported around the world by tankers. Once in Canada, the concentrate is mixed with water and reconstituted into a drinkable juice. 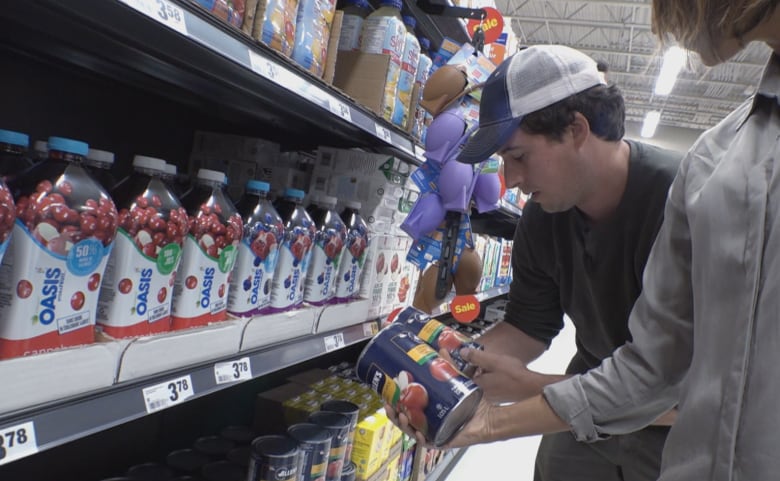 The CFIA is currently reviewing its labelling practices in Canada, though the agency says there are no plans to change the rules around apple juice labels in the future. (Norm Arnold/CBC)

Marketplace also reached out to Canada’s largest apple juice-maker, A. Lassonde Inc., to ask about the source of its apples or concentrate.

The Quebec-based Lassonde owns and produces about a dozen juice brands throughout North America, including Oasis, Fairlee, Rougemont and Graves — and the iconic Allen’s, with that navy blue can sporting shiny McIntosh apples, a maple leaf and the slogan: “A Canadian Favourite For Over 80 Years.”

While a customer service agent first said she thought the apples used in Allen’s juice were “Canadian,” a later email from the company indicated that the apple concentrate used “can come from a variety of places, including North America, South America, Asia and Europe.”

Juice apples not worth the squeeze

But those answers don’t sit well with Schuyler. “For farmers, it’s just frustrating that you can’t identify what [or] if this juice was made with Canadian apples.”

For farmers like him, growing and selling apples for juice is no longer worth the squeeze. Like many Canadian apple farmers Schuyler focuses on cultivating large, perfect eating apples which fetch a higher price than juice or “salvage” apples. 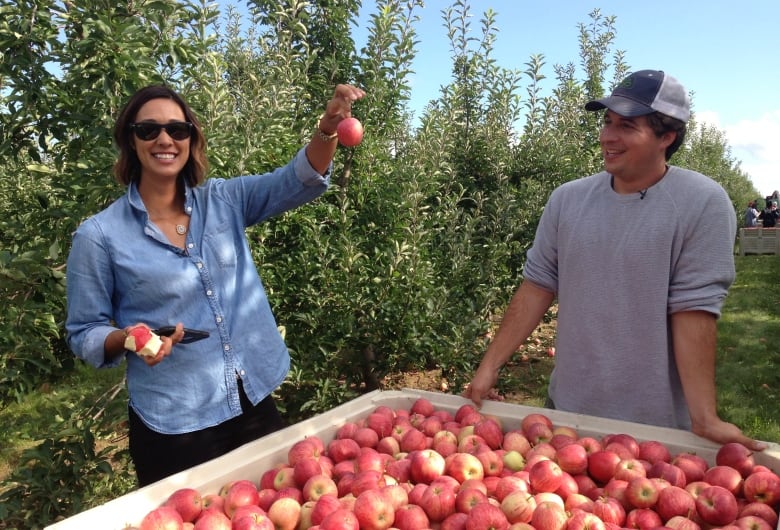 Marketplace host Charlsie Agro and Brett Schuyler test some of the apples grown at Schuyler Farms, which produces 4,500 tonnes of apples each year in a dozen varieties. (Jeannie Stiglic/CBC)

Schuyler says he is paid about 25 cents a pound for fresh McIntosh apples for eating, for example, compared to just five cents a pound for undercoloured, small, bruised or misshapen fruit that don’t meet the standard of perfection for produce aisles.

That means he makes no money selling juice apples — because it costs him about that much per pound to harvest them.

And there is little incentive for Canadian juice-makers to pay local apple farmers higher prices because of the plentiful supply of cheap, foreign concentrate.

“This is the problem,” said Schuyler. “There’s not a lot of interest at the company level about growing Canadian juice.”

The CFIA is currently reviewing its labelling practices in Canada, though the agency said there are no plans to change the rules around apple juice labels in the future.

“What’s in everybody’s best interest is … for the information to be available,” she said. “As long as this information is available, the consumer has the ability to get it — and that is what’s important for us.”

The current labelling policy is also about balancing consumer need for immediate information and industry need for flexibility, Dimitri said.

And if the answers consumers seek are not forthcoming or complete, Dimitri urges Canadians to contact the CFIA.

“The reality is if you’re not satisfied with the answer that the industry is giving you — and that’s something that I say to all Canadians — CFIA welcomes all Canadians to actually come and talk to us.”