NDP leader Jagmeet Singh says, yes, he does want to be prime minister. And, no, he’s not concerned with anyone who would roll their eyes, scoff, or ask him if he’s seen the polls lately.

They currently have Singh’s party in third place nationally, with less than half the support each of the other two main parties currently enjoy. There have been questions about whether he can win his own seat in a February byelection. 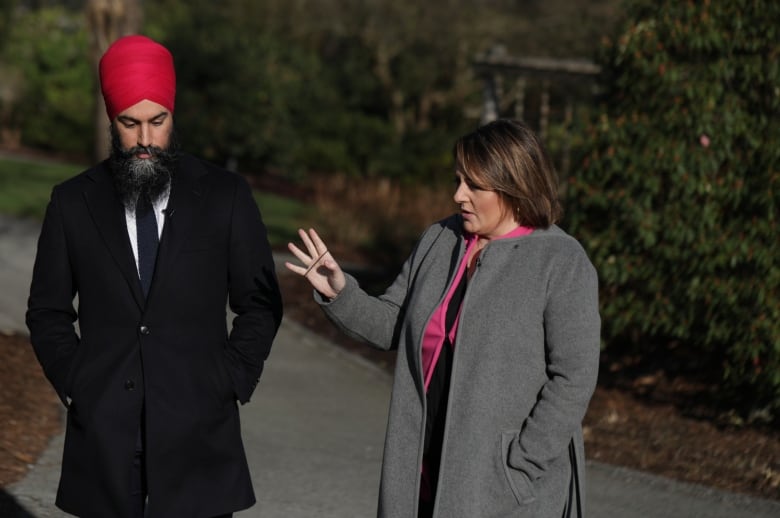 Whether Singh can win a seat in the House of Commons through a February byelection is up in the air. A poll in the fall put the NDP in third place in Burnaby South, but a recent poll has Singh ahead of his rivals. (Glen Kugelstadt/CBC News)

Still, in a sit-down interview with The National‘s Rosemary Barton, Singh made it clear, several times, that his main goal in the 2019 federal election is to “make people’s lives better.” To him, that means better housing, medications covered under the universal health care system, and investments in green jobs and technology.

NDP Leader Jagmeet Singh says he’s not concerned about people who would roll their eyes at his goal to be prime minister. 0:56

In recent weeks and months, though, Singh has faced an onslaught of criticism. His detractors have accused him of being ill-prepared to lead the party, whether it was last April, when he had to ask a colleague for help during a news conference on the party’s position on the government’s firearms bill, or last Sunday, when he appeared confused during a TV interview, and not aware of a recent op-ed piece in which the Chinese ambassador accused Canada of “white supremacy.”

Singh said he can take criticism.

“I know it comes with the territory it comes with being a national leader,” he said. But he acknowledged there is room for improvement.

“Clearly in some cases, like if we talk about the op-ed, I hadn’t seen the op-ed. So, that’s something that, of course, I want to be able to know and see everything that’s that’s being asked that’s relevant to the day. So yeah, there’s going to be, there’s work to be done.”

Rosemary Barton asks Singh whether he underestimated the level of preparation needed to be party leader:

Rosemary Barton asks Singh whether he underestimated the level of preparedness required of a leader who wants to lead the country. 1:35

One of the issues Singh would have to be ready to deal with on day one is immigration. It is an issue which has dogged the current prime minister, as well as Justin Trudeau’s predecessor, Stephen Harper.

The NDP has been calling for the suspension of the Canada-U.S. Safe Third Country Agreement ever since the number of illegal border entries by refugees coming through the U.S. started to rise, shortly after Trump took office. In 2018 alone, the government says the RCMP intercepted 19,419 asylum seekers between ports of entry along Canada’s border with the U.S.

“Right now, there are people that are fleeing unpredictability in the States,” Singh said. “Those are folks that were initially admitted to the States, they went through different checks and controls … And now, given some of the comments made by the Trump administration, there they’re not certain about their future. So what we need to do is acknowledging that the Safe Third Country Agreement was made in a different context.”

Singh also said he would not have signed the new trade deal with the U.S. until it lifted the trade tariffs on steel and aluminium.

“We should have used this opportunity, this leverage, to say, ‘Get rid of those illegal tariffs,'” he said.

“The U.S. needs this agreement, let’s not let’s not kid ourselves. I think there are problems with that agreement. But at the minimum we [should have] said, ‘We’ve got this agreement, we will sign it if you get rid of these illegal trade tariffs which you know are illegal.'”

Would Singh have walked away from the deal had the tariffs not been lifted?

Singh says the government shouldn’t have signed the new trade deal with the U.S. until it lifted the steel and aluminium tariffs. 1:10

Another riding being contested in the February byelection is Outremont — a symbolically important Quebec riding for the party, which revealed some of the first hints of the “Orange Wave” in 2007, when former leader Tom Mulcair won the seat.

Right now, Outremont is not a surefire win for the NDP.

And some Quebecers — along with Premier François Legault — have very strong feelings about an issue close to the NDP leader: people wearing overt religious symbols, such as the turban Singh wears. A poll released in late 2018 found that a majority of Quebecers support the Quebec government’s plan to ban the wearing of religious symbols by people in positions of authority, judges, police officers, and Crown prosecutors.

Singh says he doesn’t think his being leader will hurt the NDP’s chances in Quebec.

“We’re going to work hard in that byelection and we’re gonna work hard in Quebec because Quebec’s concerns at the end of the day the folks in Quebec care about a lot of the things that Canadians care about.”

Singh addresses Quebec’s plan to ban the wearing of religious symbols and whether he’s experienced any fallout as a result:

Singh says he does not see any signs that Quebecers are concerned about the fact that he wears a turban. 1:56

On Feb. 25, the day Singh will try to win a seat in the House of Commons, he will have been party leader for just shy of 17 months. It’s not the longest an NDP leader has led the party from the outside. Jack Layton waited 17 months to be elected; Alexa McDonough waited 20.

But the pressure to win is huge. No leader of a major federal party has ever lost in a byelection since 1942, when Conservative Leader Arthur Meighen left the Senate for an unsuccessful attempt to gain a seat in the House.

Rosemary Barton asks Singh if running in Burnaby South was the right choice:

Singh has faced criticism for running in a riding thousands of kilometres from where he’s lived most of his life. But he says the issues facing voters there are universal. 0:50

Despite missteps and criticism, NDP leader says he’s ready to lead the country. 15:02