It is not unreasonable that the majority of Canadians and the 97 per cent of scientists who understand that climate change is real are feeling a certain amount of despair.

Optimism following the 2015 Paris summit that the world could and would halt the growth of greenhouse gases in the earth’s atmosphere and slow the devastating effects of rising seas, storms, drought and forest fires has turned to gloom.

And perhaps most disheartening is the fact that despite a strong, growing economy in many parts of the world, including Canada and the United States, governments have failed to reverse the damage. So what happens when the economy goes into retreat?

Backsliding at the G20

As the G20 meets in Argentina today, reports from groups that monitor greenhouse gas output show that none of the world’s richest 20 economic powers have met their Paris targets that would limit temperature increases to two Celsius degrees above pre-industrial levels.

“Current nationally determined contributions would lead to a global temperature increase of around 3.2 C,” says the report from Climate Transparency, based on numbers assembled using the various governments’ own data.

And yet people who have seen it say the draft resolution of the G20 concluding document backslides on climate, partly to make it palatable to U.S. President Donald Trump, who has already withdrawn his country from the Paris accord and promotes increased use of coal. 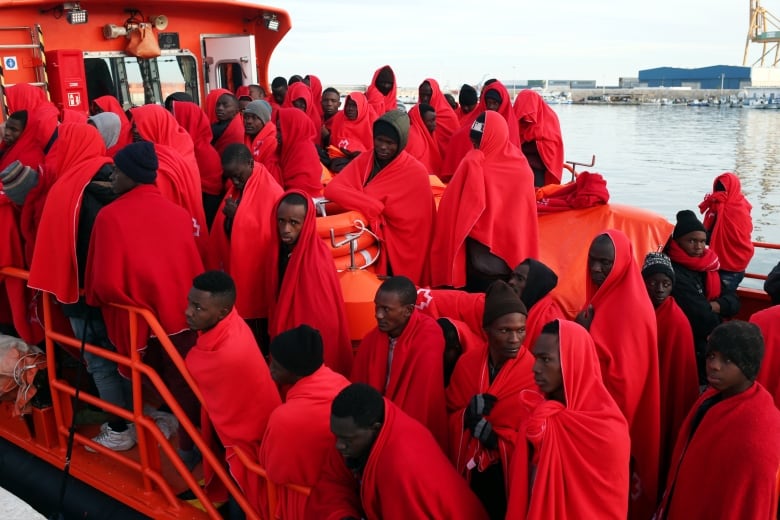 Experts say climate change is already affecting poor countries, helping to spur waves of migration that are expected to increase as the climate warms. These migrants were intercepted Thursday in the Mediterranean Sea off Spain. (Jon Nazca/Reuters)

Study after credible study show the increasing impact of climate on human lives and health. It is already contributing to mass migrations that will worsen.

Trump reportedly tried to suppress a recent U.S. government study by releasing it on the day after American Thanksgiving. That may have backfired when the release — which declared climate change had already cost the economy hundred of billions of dollars and would cost hundreds more — was unofficially labelled the Black Friday Climate Report.

“Climate change … is arguably the biggest threat humanity has ever faced,” says Stewart Elgie, chair of the Smart Prosperity Institute, a think-tank based at the University of Ottawa, comparing it to the impact of nuclear war. “We are messing with the planet’s life support system in a way that we haven’t before.”

But despite large support for climate action, governments have been captured by selfish forces that seem bound to sacrifice the planet for short-term interests. Well-funded voices of opposition use social media to discredit sound science.

In Canada the government of Ontario has tossed out carbon pricing, the favoured free market way of cutting carbon, on the grounds that it will slow economic growth. Yesterday they replaced it with costly taxpayer handouts to business that have been shown to be ineffective in parts of the world where they have been tried.

The governments of Alberta and Canada continue to use taxpayer billions to subsidize oilsands transportation when market forces have signalled we should stop.

Scientists &amp; engineers launched “InSight” from Earth (a moving platform) across 300million miles to arrive where Mars (a moving target) will be seven months later, landing safely to do geophysics at the Martian equator. And you have a problem listening to us about climate change? <a href=”https://t.co/a6gx3jmM2z”>pic.twitter.com/a6gx3jmM2z</a>

Repeatedly, public funds are being spent to make climate change worse, instead of investing in alternatives that would make it better. And since Earth’s climate is the ultimate shared resource, there sometimes seems no advantage in taking individual action, if others others just produce the carbon you have saved and more.

But rather than despairing, Catherine Gauthier is using the law to fight back. A spokesman for the Quebec youth group Environnement Jeunesse, the 29-year-old has helped launch a legal campaign to sue the federal government in an effort to keep it from destroying the planet for future generations.

“We are bringing the government to court because it is infringing our fundamental rights,” says Gauthier. Under Quebec law, that includes the right to a safe environment and the preservation of biodiversity, she says.

Gauthier says the technique has been used elsewhere, including the Netherlands, to give the fight against climate change a legal basis that stands above individual economic interests.

Sarah Buchanan, a policy expert with Environmental Defence Canada, has had moments of despair. But she still hopes democracy and capitalism can solve the problem, in part because people will increasingly witness climate change in their lives. 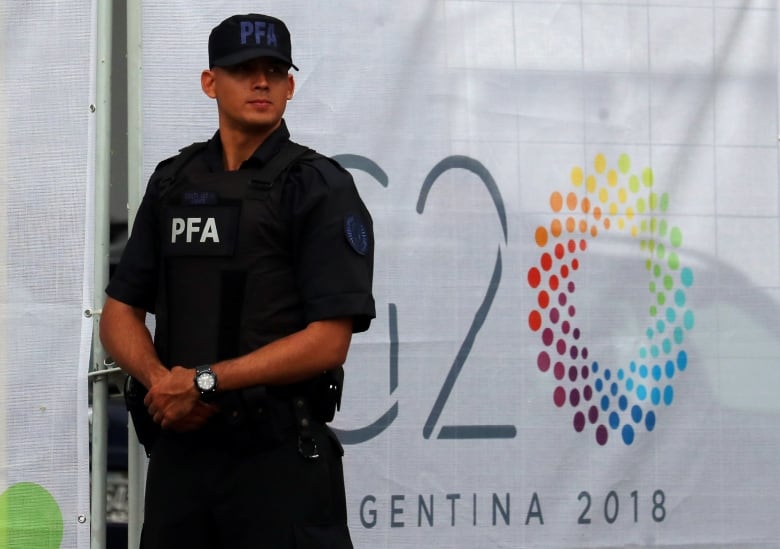 A policeman stands in front of a G20 banner at the summit’s media centre in Buenos Aires, Argentina. (Marcos Brindicci/Reuters)

“People who do not see these immediate impacts right now are going to start seeing them very soon,” says Buchanan.

While she objects to increased government subsidies for fossil fuel production, she insists it is false to see a conflict  between fighting climate change and supporting the economy. And while poll after poll show most Canadians realize something needs to be done, she thinks their voices have been overwhelmed by the financial clout of pro-carbon interests.

Buchanan says she hears from despairing people who ask what they can do, and she always asks them if they have told their elected officials how much they care.

Elgie, like other climate scientists and activists I spoke to, will not let despair divert him from helping to move the world to a low-carbon economy.

“Fear can be paralyzing,” says Elgie.

But he says that the world leaders in climate change, including the countries of northern Europe, have cut their carbon use per person to levels less than half that of Canada, with a quality of life as good or better than Canadians’.

He admits that dramatic shifts are always disruptive and often go through a process of “two steps forward and one step back.” It may be that in recessions people will be less willing to make changes, but he says whether we realize it or not, the process of decarbonization is underway and is unstoppable.

“In 20 to 30 years, we will live in a low-carbon global economy. We can debate the pace of change,” he says, “but the fact that change is happening is now undeniable.”