Irving La Madrid ambles up to a squat yellow house in a heavily Hispanic neighbourhood of Phoenix and taps his fingertips against the screen door.

“Hola!” the 17-year-old says through a mouthful of braces.

A shape rustles around inside. Someone peers through the screen. A dog is barking, its excited yipping now competing with La Madrid’s pitch. The teenaged canvasser for the progressive-leaning grassroots group Lucha has a pressing query for the resident within — a question he has asked hundreds of Latinos leading up to Tuesday’s U.S. midterm elections.

Answers to that query among members of Arizona’s growing Hispanic population could tell the story of a reliably red state turning purple, or even blue.

Among the many political contests this election day, a key Senate race has drawn national attention to Arizona, where U.S. President Donald Trump has stoked already sensitive immigration and border-security anxieties, and where candidate Kyrsten Sinema is poised to become the first Arizona Democrat since 1988 to ascend to the Senate.

Sinema, a congresswoman, is in a virtual dead heat with her Republican rival, former Air Force pilot Martha McSally.

For Democrats, flipping Arizona is a must in order to overcome their long odds of controlling the upper chamber. 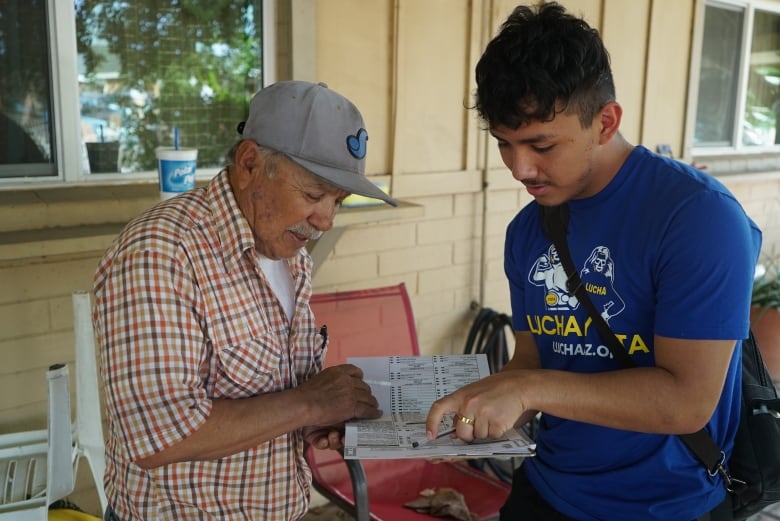 The good news for Democrats is that a growing Latino population could help make that happen — 23 per cent of the state’s eligible voters are Hispanic— if voters take Trump’s race-baiting rhetoric personally enough to oppose his Republican Party at the ballot box.

“A lot of them tell me they’re voting because of what Donald Trump has said about immigrants,” La Madrid said on a recent canvassing outing. He won’t repeat the phrases, but he said Latino voters occasionally fume about Trump when he goes door-knocking.

“They use, um, strong language,” he said.

At the door of a purple stucco house, La Madrid likes what he hears from 25-year-old voter Yesenia Arteaga, who already filled her mailer’s ballot. She plans to drop it off at a community centre on Tuesday. She tells him the president’s portrayal of impoverished Central American asylum seekers as an “invasion” of criminals was hurtful to her.

“I’m not an anchor baby. And my parents aren’t criminals,” Arteaga said as a toddler wailed behind her in the house.

Many of Arteaga’s family members usually skip voting — but not this time, she said. This time, they’re motivated.

“And a lot of it has to do with Donald Trump.” 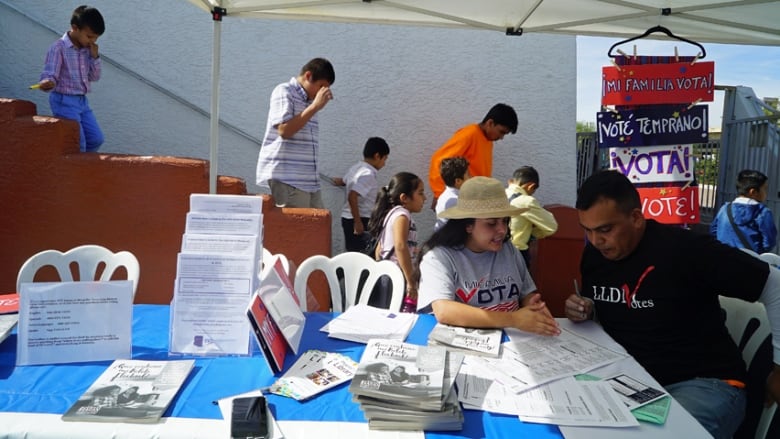 These are the kinds of scenes that might prove worrisome for Republicans, who have grown leery of the president’s closing argument focusing on immigration rather than the booming economy or Republican tax cuts.

Arizona is projected to become a majority-minority state by 2030, about 15 years before the rest of the country reaches that demographic profile. Trump won by just three points here in 2016. Suddenly, it seems, the Grand Canyon State may not be so politically red after all.

Democrats and Republicans have long taken Latino voters for granted, said Lisa Sanchez, who teaches public policy at the University of Arizona. They can’t afford to much longer.

“The whole thing is whether or not they’re mobilized to turn out to vote. This population has been largely under-mobilized across the country, but notably in Arizona,” she said.

Meanwhile, voters are recoiling from Trump’s hyping of an immigration “crisis.” To make his point, he has fixated on a slow-moving and dwindling caravan of Central Americans fleeing violence and still 1,400 kilometres away. 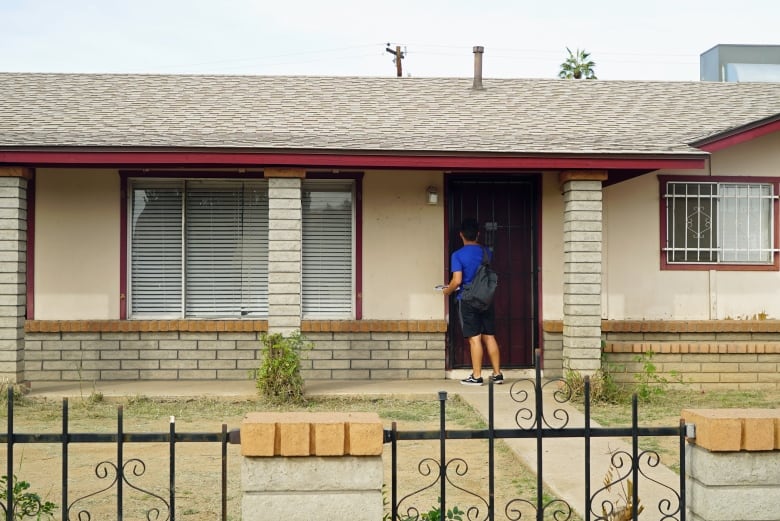 La Madrid knocks on the door of a home in a predominantly Hispanic neighbourhood in Phoenix. Arizona is projected to become a majority-minority population by 2030, and Latino voters could tilt this once-reliably red state blue. (Matt Kwong/CBC)

Trump has called the impoverished migrants an “invasion” of criminals and dispatched 5,200 troops to counter them at the border. His critics call it a political gift for the Republicans that will likely solidify his red-meat base. But they also note that many of the estimated 4,000 people seeking refuge are desperate mothers and children walking barefoot, unlikely to reach the U.S. border until mid-December.

All of which is to say Trump’s recent racially tinged rhetoric — part of his closing midterms argument focusing on immigration, threatening to take away birthright citizenship, and releasing a race-baiting ad — is a gamble here.

‘Election of the caravan’

“Remember, it’s gonna be an election of the caravan,” Trump said at a recent rally.

But Republicans have shown signs they may want to distance themselves from such talk. Despite Arizona’s impending swing-state status and resulting national attention, Trump has avoided making stops here in the final stretch of campaigning, reportedly because Republican leaders in Arizona requested that he stay away. A Trump appearance would be “not helpful” to McSally at this point, one official told CNN. 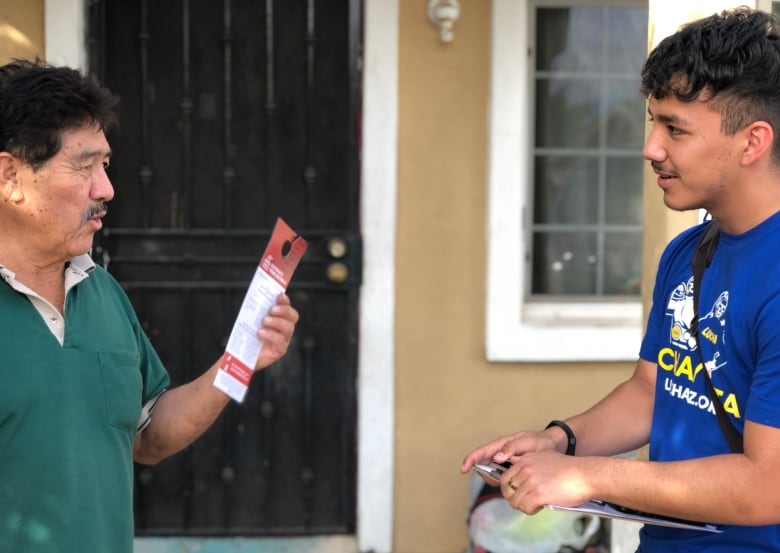 If the president’s race-baiting rhetoric ends up costing Republicans on Tuesday night, it need not have been so, said Joe Garcia, the director of the Latino Public Policy Center at Arizona State University.

“It’s important to understand Latinos match up very nicely with core Republican values. Big on family, faith, a high proportion of military service, small-business entrepreneurship, and a reluctance to rely on the government for anything,” he said.

So what’s the deal-breaker?

It has become a powerful and emotional topic for Hispanics in border states.

At a voter-registration event at the La Luz del Mundo church in Phoenix’s Alhambra district last Sunday, children kicked a soccer ball in the courtyard while first-time Hispanic voters came clutching their election envelopes and waiting for instructions on how to complete their ballots. 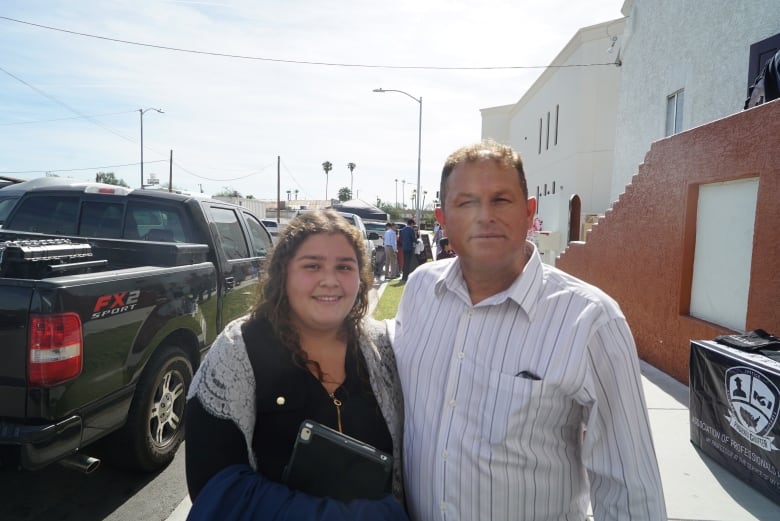 Sixteen-year-old Sarai Lopez, left, with her 51-year-old father Otoniu, an immigrant from Mexico, after a Sunday church service in Phoenix. Otoniu, who works in construction, became emotional when asked why it was important for him to vote this year, saying the U.S. president’s immigration rhetoric has personally offended him. (Matt Kwong/CBC)

Otoniu Lopez, one of the churchgoers milling about outside, had already voted. But tears rolled down his cheeks when the 51-year-old construction worker, who immigrated from Mexico and eventually became a naturalized citizen, explained his motivation to cast a ballot this year.

“What has inspired me is that I don’t feel it’s right that Donald Trump doesn’t see us as humans,” he said in Spanish through an interpreter.

When the subject arose of Trump’s constitutionally implausible desire to end birthright citizenship, Lopez’s voice grew hoarse and his eyes welled up again.

“It was very dangerous where we lived. I tried everything I could to bring them here the right way, and Trump wants to close us off from liberties,” he said.

Lopez’s 16-year-old daughter, Sarai, dabbed her father’s eyes as he spoke. She was born in Phoenix and can’t wait to vote, she said. 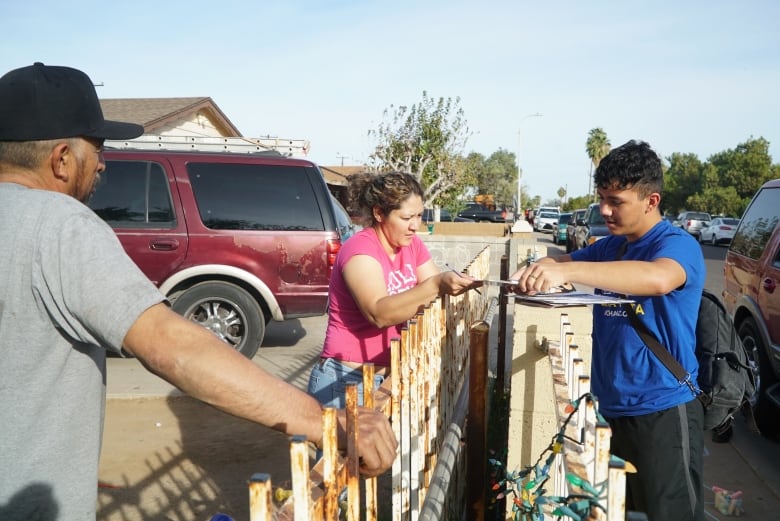 La Madrid, right, helps a woman register to be a first-time voter while canvassing in a heavily Hispanic neighbourhood. The woman said she will definitely vote in the 2020 election. (Matt Kwong/CBC)

La Madrid can only wish to be so fortunate. While out trying to get his community to engage in the democratic process, he noted that he’ll turn 18 next year.

But he revealed a maddening irony: He’s a recipient of DACA, the program that temporarily shields from deportation people who arrived to the U.S. illegally as children. As such, he may never be able to vote.

Every time he explains how to complete the ballot, or watches someone drop their ballot in their mailbox, he said, “it’s like I’ve voted more than one time. I feel like I’ve voted 10, 20, a hundred times.”

The high school senior is at the top of his class. His just sent in college applications. He has his eye on Stanford University and wants to study international relations to maybe become a diplomat, one way to see the world. For now, though, his focus has been on getting out the vote.

After he finished helping an elderly man fill out his ballot this week, a neighbour across the street beckoned the teenager over. His wife, Cristal, had a request.

She was fired up about getting more politically engaged after hearing about the president’s immigration rhetoric. She knew it was too late to vote in these midterms, but La Madrid helped her complete her voter registration papers for the next election. They exchanged pleasantries in Spanish, then she shook his hand, handed his pen back and made a pledge for the next election cycle.