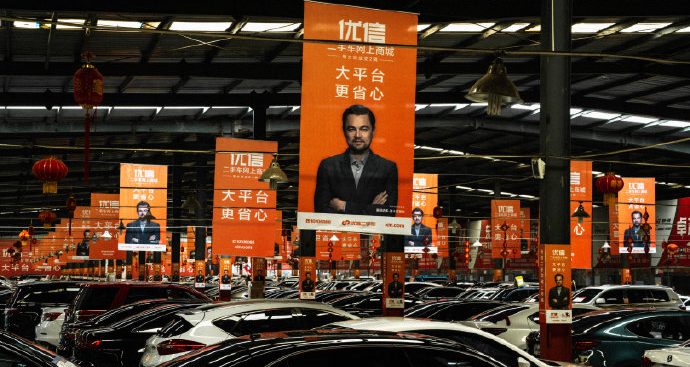 Uxin, a Chinese second-hand car dealer with Leonardo DiCaprio as its latest brand ambassador, is tipped to get a bag of new funding less than a year after it raised $225 million from its public offering on the Nasdaq.

The company announced on Wednesday that it’s selling $230 million worth of convertible notes to 58.com — China’s answer to Craigslist, Warburg Pincus, TPG and other investors. The fresh proceeds will go towards strengthening its cross-regional car transactions, a new area of focus for the firm.

The notes, due in June, convert to Uxin’s Class A ordinary shares at a price of $1.03 per share or $3.09 per ADS. Upon closing the deal, each of 58.com, Warburg Pincus and TPG will obtain the right to nominate one board director to Uxin.

Uxin was trading at $2.46 at the end of Tuesday, a 74 percent decline from its recent peak in January. Its stock tanked in April after short-seller J Capital Research broadsided it over alleged frauds. Uxin denied the accusations, saying they were “false and misleading.”

58.com made the investment only a few months after offering to sell an undisclosed amount of its stakes in Chehaoduo, which was formerly known as Guazi, for a total of $713.6 million. Chehaoduo is one of Uxin’s closest rivals and is backed by deep-pocketed investors like Softbank’s Vision Fund, which bankrolled it with $1.5 billion in February. Uxin’s other serious competitor is Renrenche, which raised $300 million led by Goldman Sachs a year earlier.

to a third-party investor for a total purchase price of US$713.6 million. The completion of the transaction is subject to certain closing conditions. Following the closing of the transaction, the Company will continue to hold a minority equity interest in Che Hao Duo.

As part of the transaction, 58.com, a 14-year-old Chinese internet firm that went public in New York six years ago, will come into a strategic partnership with Uxin, just a few months after Uxin agreed with Alibaba to set up a used car section on the ecommerce giant’s Taobao marketplace. Uxin said cooperation with 58.com will take place in areas such as “traffic and inventory acquisition, used-car inspections, big data analysis and SaaS.”

Uxin declines to further elaborate on the tie-up, but it’s likely to piggyback on 58.com, the holding group that commands 500 million users from its portfolio of mobile apps including Craigslist -like 58 app, a property portal and a used goods marketplace.

There are increasing synergies between 58.com and Uxin as both are exploring opportunities outside the crowded markets of China’s megacities. 58.com hit a critical milestone in 2018 after it racked up 100 million new users for its classifieds services customized for small-town populations, which include everything from job listings to trading cars.

In the same vein, Uxin has churned out reports that show demand for used cars coming from China’s lower-tier cities has surged in recent years. The boom is in part a result of a new Chinese policy that allows consumers to buy second-hand cars from a different province, enriching the variety of car options for rural residents.

“We see enormous growth potential in China’s used car market and believe that the volume of used-car transactions will overtake that of new cars in the years ahead,” said Michael Yao, chairman and chief executive officer of 58.com, which runs its own online used car business.

The deal will allow 58 Used Car to “benefit from Uxin’s tremendous offline transaction-related expertise,” added Yao, referring to Uxin’s mix of digital and physical sales channels. “By jointly integrating our online and offline services, we will be ideally positioned to significantly enhance the user experience for purchasing used cars and drive greater efficiency in this growing market.”

Updated on May 29 with details about the new proceeds, the 58.com partnership and Chehaoduo.