Rihanna, rapper Travis Scott, Blake Lively and comedian Amy Schumer are among the many celebrities encouraging their significant social media followings to show up at the polls for the U.S. midterm election on Nov. 6.

And to get young people’s attention, they’re getting creative.

Schumer enticed fans to click on her list of voting recommendations by simultaneously announcing her pregnancy. Lively honoured husband Ryan Reynolds’ birthday with a photo of the couple’s early voting ballots.

Scott hit the campaign trail in his hometown of Houston with Texas Senate hopeful Beto O’Rourke. Yara Shahidi, star of Grown-ish, launched a project (Eighteen X 18) specifically for the midterms to get her peers more politically active.

Dozens of others, including Rihanna, have posted pleas for young fans to participate in the voting process.

“I do see a lot of retweets on Twitter from celebrities,” said Furaha Njoroge, 19, a first-time voter and college student in Claremont, Calif. “I feel like a lot of people are like, ‘Oh yeah, retweet, retweet.'”

The push to vote in the midterms has become so pervasive that Elle magazine was forced to apologize last month after posting a fake celebrity headline about Kim Kardashian and Kanye West as clickbait. When users tried to open it, they landed on a voter registration page instead.

Hollywood stars, many of whom tend to lean left, are known for campaigning during general election years. But it’s rare that the midterms — which can change U.S. Congress, but not the president — would garner this much celebrity attention.

But the current administration’s positions on hot-button issues such as the Kavanaugh hearings, gun rights, health care, the environment, LGBT rights and immigration have led to greater political divisions, and ramped up efforts among many cultural icons to break the Republican majority in Congress.

Pop star Taylor Swift broke her political silence last month and surprised her 112 million Instagram followers by endorsing two Democrats running in Tennessee. She’s also rewarding early and first-time voters by posting their photos on her account when they tag her with #JustVoted. 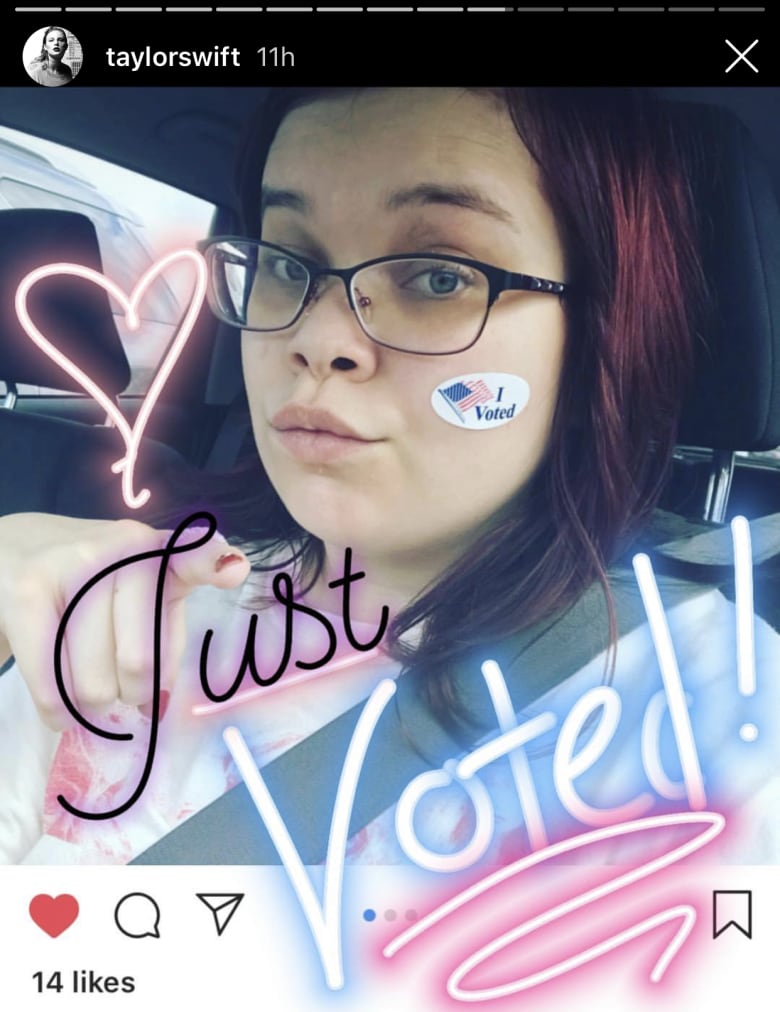 Taylor Swift has been incentivizing young fans, like this one, to vote early by offering to post their photos on her social media account. (Taylor Swift/Instagram)

“There’s no question in the current political climate, a higher turnout among younger people would lead to a heavier vote for the Democrats,” said John J. Pitney, a politics professor at California’s Claremont McKenna College. “Which is why Democrats are focusing on getting younger people registered.”

The lowdown on young voters

According to the U.S. Census Bureau, 46.1 per cent of people aged 18 to 29 reported voting in the 2016 presidential election. Compare that to the 70.9 per cent of citizens aged 65 and older who voted.

“Most young people see it as, ‘Well, why should I vote?'” said self-described millennial Jason Abbott, an active Republican, while attending a recent bipartisan conference in Los Angeles called Politicon. “Like, ‘What’s it going to affect me?’ Or like, ‘Why even waste the time to do it when I’m not going to change anything?'” Republican Jason Abbott, right, said people in his age cohort are often indifferent to politics, and don’t believe they can make a difference with their vote. (CBC)

Others argue that this demographic often identifies with more than one ideology or perspective, and most party candidates don’t reflect those variations.

“Politics is only a certain aspect of who we are as individuals,” said Joshua Choa, part of the youth branch of the Democratic party, who also attended Politicon. “It’s not our whole selves.​” 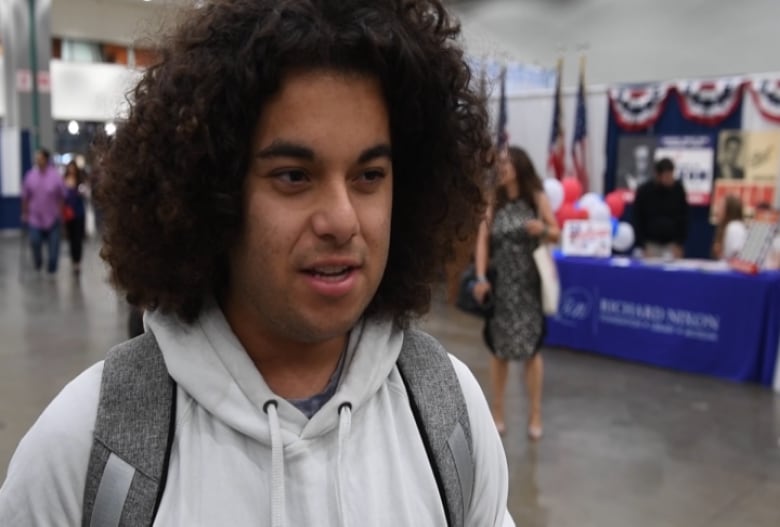 Joshua Choa, who is part of the youth branch of the Democratic Party, said millennials are much more open to different ideas and perspectives than previous generations, leaving many disillusioned with candidates who don’t reflect those nuances. (CBC)

Experts say it’s neither apathy nor disillusionment alone that keeps many young people from engaging. In many states, voters must register before election day to be counted, and must re-register every time there’s a change of address. That can be a hassle for those who move around a lot. Being forced to fill out paper ballots can also be a deterrent for a population used to getting things done at the push of a button.

But with millennials poised to bypass baby boomers as the largest demographic in the American electorate by 2020 — in time for the next presidential election — their vote is coveted, even if it remains unpredictable. 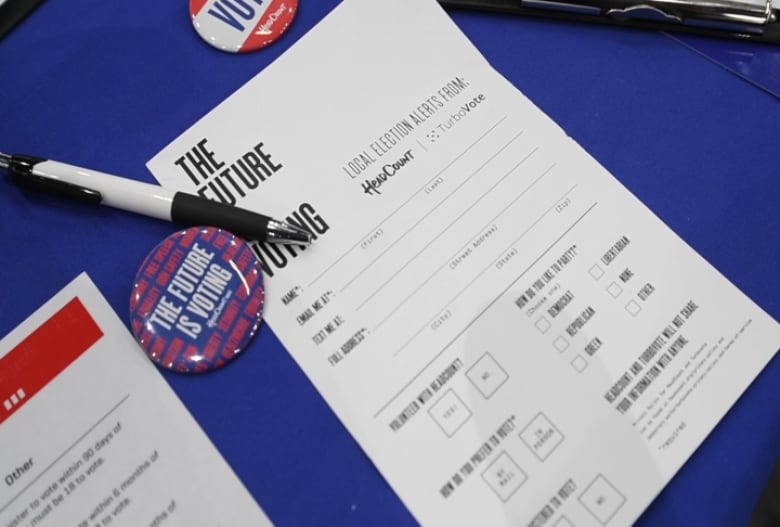 Experts say the paperwork involved in the voter registration process, as well as the inability to vote online, could be contributing to low turnout among young people. (CBC)

Unfiltered, genuine candidates is ‘really what excites us’

CBC spoke with a number of college students in California — some of whom said they will be voting for the first time — about what will influence them the most to head to the polls for the midterms.

When I see more personalized stories by these celebrities and their reasoning behind voting and their stories, I think that influences me more.– Pearl Park, 19, college student and first-time voter

“Young people are jaded and cynical in an unnatural sort of way,” said student Sean Burch.

“Really, the only thing that will bring young people out to vote — really turn them out in large numbers — is candidates who represent the public interest and not special interests, not their big donors. People who are unfiltered and genuine. Because that’s really what excites us.”

“My friends are helping me get an absentee ballot, since I’m from New York,” said neuroscience major Mateo Garcia, 19. “They’re really the ones helping me learn my election education.”

Accounting student Pearl Park, also 19, said she’s influenced by “more personalized stories by these celebrities, and their reasoning behind voting.”

She gave the example of Jimmy Kimmel and a monologue he gave on his late-night talk show last year concerning health care for his newborn son, who needed heart surgery.

“[Kimmel] put out a really good message about participating and voting in the next election because of that, and I think that was a really cool way to interact with people and get them to vote.”

The limits of celeb influence

Jessica Alba, Charlize Theron and Julia Louis-Dreyfus are part of a large Hollywood contingent participating in a final drive for young votes on the eve of the election, with a get-out-the-vote telethon being streamed on social media channels. Several YouTube stars will also be part of it to capture a younger audience.

Several large-scale campaigns, including Michelle Obama’s organization When We All Vote, have been geared toward the millennial demographic and enlisted prominent Democrats such as singer-actor Janelle Monae and Hamilton creator Lin-Manuel Miranda to boost registration numbers.

“[Celebrities] have a huge platform to get us in the door, but it really takes that peer-to-peer action to get people moving,” said Stephanie Young, communications director for When We All Vote.

Pitney, the Claremont McKenna College professor, says stars are most useful at getting attention. Getting voters to the polls, however, requires much more.

“They get younger people to read the message, to watch the video, to listen to the appeal and that’s something. That’s not minimal,” said Pitney. “The celebrities can help at the margins, but they’re not the reason why people will show up and vote.

“There’s one celebrity who could and probably will make a difference in turning young people out in this election. And that celebrity’s name is Donald J. Trump.”