N-n-not to put too f-f-fine a point on it, but Canada is c-c-c-cold right now.

From central Saskatchewan to eastern Quebec and through much of Nunavut, extreme cold warnings from Environment Canada advise people to be mindful of the “extremely dangerous” conditions, frostbite and the safety of their pets.

The bitter cold is the result of a split in the polar vortex that has allowed temperatures to plunge much farther south in North America than normal.

“Bitterly cold arctic air has moved into southern Ontario overnight,” the warning for Toronto says. “Overnight low temperatures near minus 20 degrees Celsius combined with strong southwest winds have resulted in wind-chill values in the range of minus 30 to minus 35.”

And those are two of the warmer spots under warning.

Wind-chill values of –50 and colder

At 7 a.m. CT, it was –40 C in Winnipeg and felt like –50 with the wind chill. Dozens of schools in the province were closed due to the extreme cold, and CAA Manitoba sent out a service alert explaining it was temporarily stopping house calls and focusing on people who may be in an unsafe situation, such as at the side of a road.

All school bus service in Winnipeg was cancelled for Thursday due to the frigid weather. In Toronto, the UP Express train that connects Pearson International Airport to downtown stopped running late Wednesday due to “weather related equipment issues.”

In Saskatchewan, Manitoba and northern Ontario, forecasters are warning of wind-chill values of –50 or –55, and in parts of Nunavut –60.

“Wind-chill values of this magnitude are relatively rare for this region and are extremely dangerous,” the warning in several northern Ontario regions says.

Extreme cold can cause hypothermia and frostbite, and the warnings tell people to watch for symptoms related to the conditions: shortness of breath, chest pain, muscle pain and weakness, numbness, and colour change in fingers and toes. The weather agency also says that frostbite can occur within minutes.

Bitter cold can cause frostbite in just minutes. Here’s how to recognize the warning signs and treat them. 0:59

But not everyone is staying indoors. And some tobogganing kids got some fun help with the worst part of sledding. Worth a quick watch:

A parent comes up with a great way to get the sled back up the hill after the kids have gone down. 0:37

In most of the affected areas, the weather isn’t likely to warm up — relatively — until Friday or Saturday.

“We have this air — you know, the infamous polar vortex, if you will — or this arctic air that has been just sitting,” Marie-Eve Giguere, a warning-preparedness meteorologist with Environment Canada, told CBC Thunder Bay on Tuesday.

“It always wiggles around the North Pole in the winter, and now it just so happens that it digs over Ontario.

“It’s not going anywhere,” she continued.

“In meteorology, we say we need a kicker [to displace it]. The weather pattern is sort of locked in a position, and then it just spins and spins and spins over the same area.”

The same arctic deep freeze has also enveloped the U.S. Midwest, where at least 12 deaths have been linked to extremely cold weather.

The frosty temperatures forced widespread closures of schools, businesses and government offices, and prompted the U.S. Postal Service to take the rare step of suspending mail delivery to a wide swath of the region.

More than 1,600 flights have been cancelled at airports in Chicago, where temperatures of –30.5 C were recorded early Wednesday.

Extreme weather conditions prompted Amtrak to cancel all trains into and out of Chicago on Wednesday and most services to or from Chicago on Thursday. 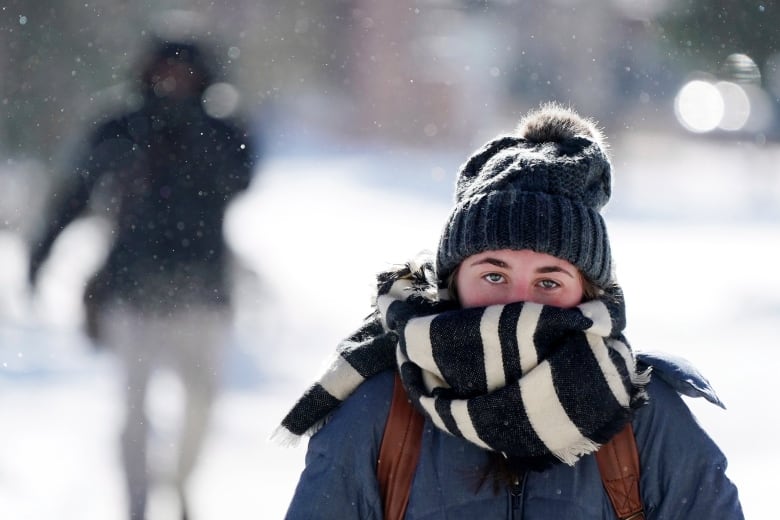 Jillian Hansen, a student at the University of Minnesota, walks on campus wrapped up in an oversized scarf amid snowflurries Tuesday. At least four deaths have been tied to the cold snap in the U.S. (Anthony Souffle/Star Tribune via AP)

Officials throughout the region are focused on protecting vulnerable people from the cold, including the homeless, seniors and those living in substandard housing.

The cold is attributed to a sudden warming far above the North Pole. A blast of warm air from misplaced Moroccan heat last month made the normally super chilly air temperatures above the North Pole rapidly increase. That split the polar vortex into pieces, which then started to wander, said Judah Cohen, a winter storm expert for Atmospheric Environmental Research.

One of those polar vortex pieces is responsible for the frigid temperatures. 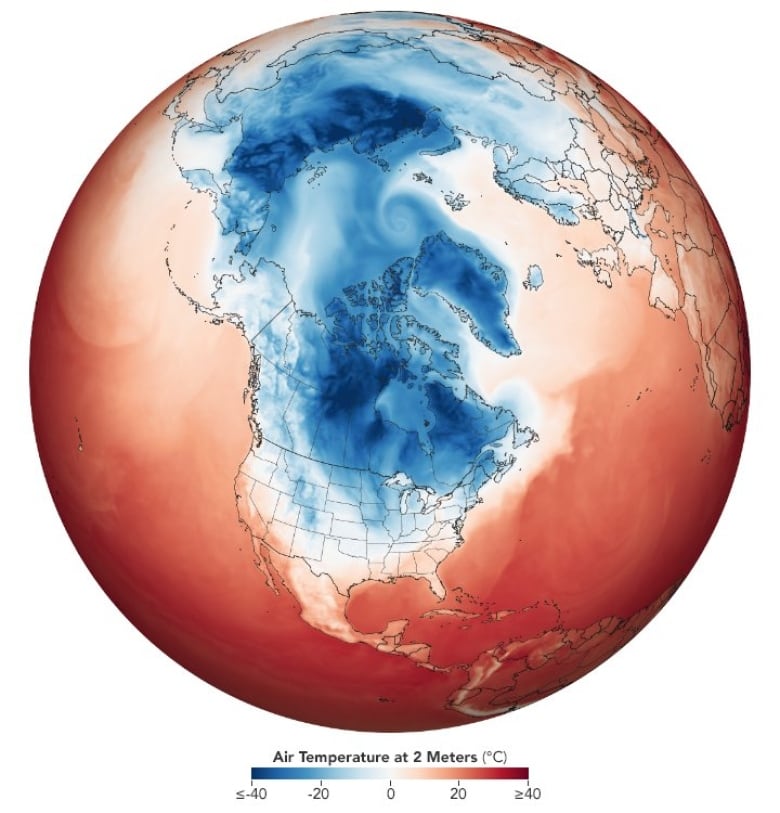 This map shows air temperatures at two metres above ground at 4 a.m. ET on Tuesday. (NASA)