People gathered in Mons, Belgium this weekend to witness celebrations marking the 100th anniversary of the end of the First World War will get a glimpse of an authentic piece of weapons technology history.

An armoured vehicle that took part in the first victory parade following the end of the war — on Nov. 11, 1918 — will roll over the cobblestones once again on Sunday.

The vehicle, which has been in the Canadian War Museum’s collection for decades, was painstakingly put back into working order by the gallery’s restoration team.

The vehicle has been kept in pristine condition since it was acquired; the major hurdle in its restoration involved replacing portions of the carburetor last summer.

The restoration team’s first challenge was to track down a service manual.

“I had no documentation, mechanical documentation, on this,” said Michael Miller, the War Museum technologist who led the restoration team. “A museum, a private auto museum in the States, their curator generously sent me a photostat of a beautiful 1916 manual.”

It was more than enough information because the basic design did not change between 1913 and 1920, he said.

A fully restored 1913 model Autocar Armoured Car that fought with the Canadian Machine Gun Corps and took part in the first victory parade following the end of the First World War is shown here in Ottawa. 0:31

At the outbreak of the First World War, wealthy entrepreneur and journalist Raymond Brutinel approached the Canadian government with a plan to raise and equip a motorized machine gun brigade.

Eventually, 20 vehicles were acquired in the U.S., but years of trench warfare limited their utility — until the Imperial German Army began to collapse and the war became mobile again.

“In the last hundred days of the war, when they were out of the trenches, it saw a lot of service,” said Miller, who noted the bullet holes in the armoured skin of the box-like vehicle, which only had a top speed of 40 kilometres per hour.

The vehicle survived, in part, because of the efforts of one of the men who rode in it: Frank Worthington, a Canadian second-lieutenant (later a major-general). 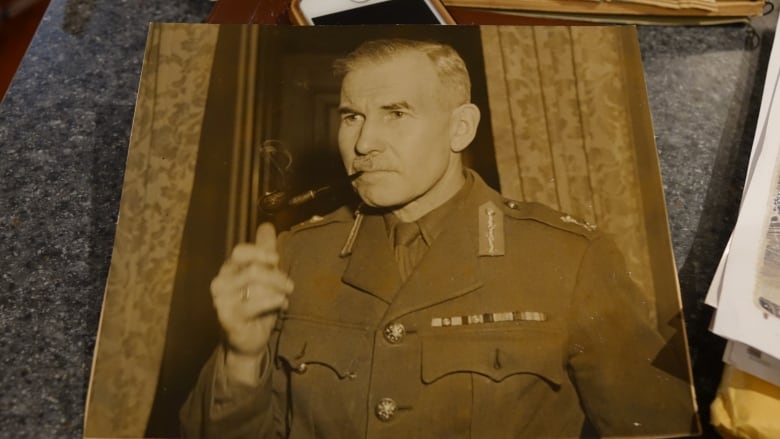 Known as “the father of the Royal Canadian Armoured Corps,” Frank Worthington joined the Canadian Army at the outset of World War I. He went on to organize the Canadian tank corps in the Second World War. (CBC)

Worthington is a legend in Canadian Army circles. He won the Military Medal for actions at Vimy Ridge in April 1917, while serving with the machine gun corps.

Known as “Fighting Frank” and “Worthy” to his men, Worthington is credited with organizing the Canadian tank corps in the Second World War. He used the armoured car for war bond drives in the 1940s.

His high public profile during those years — he appeared on the cover of Maclean’s magazine at one point — was due in part to the loving efforts of his wife, who wrote a book about his exploits.

“I remember him as hugely fun. A bit wild. He was very creative and inventive,” his granddaughter Linette Fawcett told CBC News in an interview. (Worthington’s grandkids knew him as ‘Pico’.) 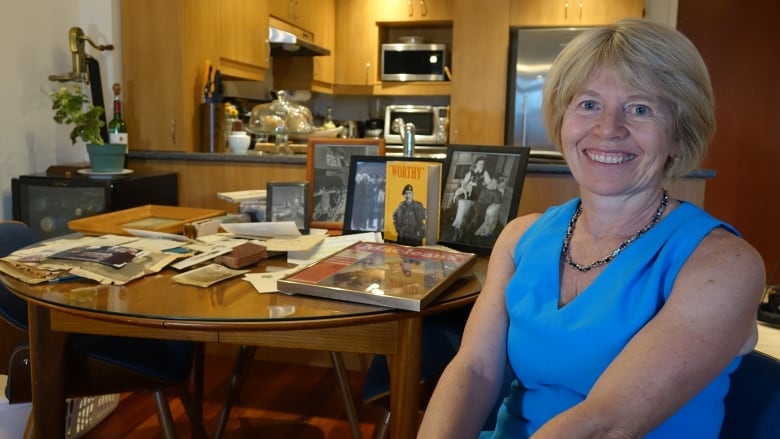 Linette Fawcett, granddaughter of Frank Worthington. “I remember him as hugely fun. A bit wild.” (CBC)

She remembers him vividly and was present at his 1967 funeral, which was the last time the armoured car was used.

A memorial park is named after him at Base Borden in Ontario, but Fawcett said she remembers more than the public figure.

“The man we knew really had nothing to do with the military man,” she said. “My mother really wanted us to not know that man. She wanted us to know just a normal person.”

That “normal person” Fawcett remembers was a typical frumpy grandfather in many ways, who wrestled and told amazing tales. Many of the extraordinary and hair-raising adventures he regaled his grandkids with were drawn from his early life as an orphan in Mexico, where his half-brother was a mine boss and (reputedly) was gunned down by the notorious Mexican revolutionary and outlaw Pancho Villa.

At various points in his early life, Worthington was a mercenary in Nicaragua and Mexico and a gunner in Cuba. He also spent time in jail.

At the outset of the First World War, he tried to make it back to Scotland, his birthplace. He ended up in Montreal, joined the Canadian Army and never looked back. 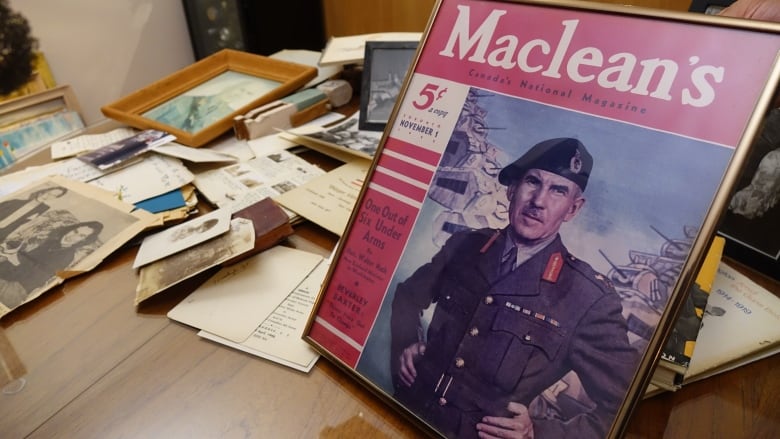 Linette Fawcett’s collection of memorabilia celebrating the legacy of her grandfather, including his Maclean’s cover. (CBC)

Fawcett remembers an extraordinarily warm man, who sent loving, even silly notes to his children and grandchildren.

That gulf between the public man and the private man was particularly important to Fawcett’s mother, who always seemed uncomfortable in the spotlight. She told her children: “You knew him as a man. you knew him as a person and those are things to remember … what a person is.”

Fawcett said her grandfather would be pleased to learn his armoured car is still running 100 years later.