It’s taken nearly three years, but the Brexit debate in Britain is finally exiting the realm of the theoretical.

After Sunday’s historic European Union vote, the divorce document on the table is now live, and Brexit looms on the horizon.

Now that it is better defined — well beyond Prime Minister Theresa May’s “Brexit means Brexit” — all that’s left is the approval of both the EU and British Parliaments.

But as it gears up for a showdown, the latter is set to light up with disapproval, making the often-splintered group of 27 EU countries seem utterly cohesive by comparison.

From the start of her premiership, just after the U.K. voted to leave the EU, May promised to heal Britain’s Brexit-inflicted rifts. Instead, her deal brings them all to life. The debate in Parliament is set to put the many fault lines on full, irate display.

Even in draft form, the deal May brought home from arduous negotiations in Brussels unleashed acrimony from — and within — all sides of the House. As the deal took shape, waves of her own cabinet ministers quit. More than a few Tory MPs even threatened to oust her.

Despite May’s dire warnings — it’s this deal or chaos — few beyond May’s loyalists say they favour the agreement. By most counts, the British Parliament is now almost certain to vote it down. Even the foreign minister says the arithmetic is “looking challenging.”

Ask MPs why they oppose it, however, or how they should proceed from a no vote, and they scatter in all directions. There’s not even agreement on the parliamentary procedure for the coming debate.

But they will have their raucous debate followed by a “meaningful vote.” May is even eager to debate Labour Jeremy Corbyn.

But even as the numbers bode badly for her, the prime minister seemed to acknowledge that the scorekeeping only begins now.

Sunday marked “the culmination of our exit negotiations with the EU, but it also marks the start of a crucial national debate in our country over the next few weeks,” she said.

The British people, she added, “don’t want to spend any more time arguing about Brexit. They want a good deal done that fulfils the vote and allows us to come together again as a country.”

That will be difficult when there isn’t even agreement on whether what’s on the table is better than what Britain has now. The deal has served only to harden positions, like the main Brexit fault lines that run deep through both major parties.

It’s threatened to bring down the voting alliance May cobbled together with a unionist Northern Ireland party, thereby threatening the government itself.

It’s played up the stark differences on Brexit and beyond within the Labour Party. There’s even division in May’s own Conservative Party on whether she could or should survive long enough as prime minister to see any deal through.

There are divisions among Remainers over major parts of the deal, over whether there should be a second vote. Brexiteers disagree too, even those belonging to the same party. Their many divisions play out among citizens too.

Meanwhile, older conflicts over Northern Ireland, Scotland’s independence and migration all bubbled over again, splitting the citizenry and apportioning the blame. 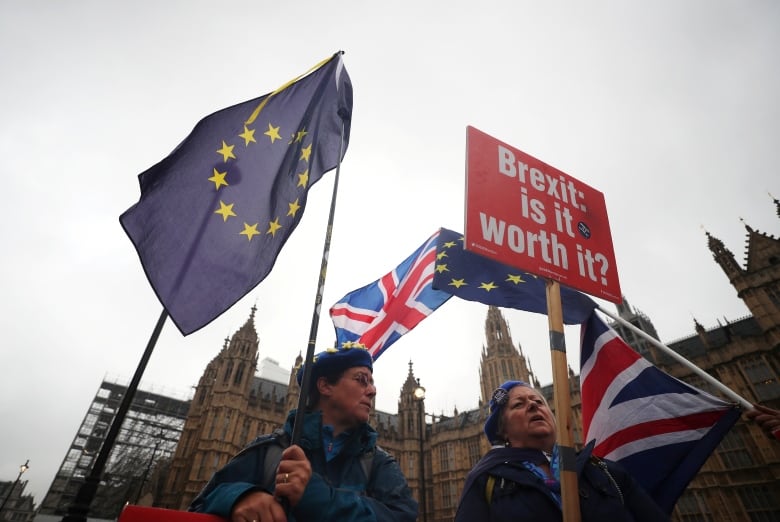 Divisions on a myriad of issues have risen to the surface amid the latest Brexit developments. (Hannah McKay/Reuters)

Stirring some of those older debates can’t be blamed entirely on May or her deal. Her predecessor David Cameron’s decision to try to heal the fault lines in his own party over the EU unleashed a whole host of others. The owners of the outlandish arguments made during the Brexit campaign starting in April 2016 also bear responsibility.

The country has yet to recover. And the Conservatives themselves are clearly nowhere near healed.

“We are divided,” Tory MP Anna Soubry says of the country. It is, she says, the government’s “biggest failing.”

Calls for another referendum

Soubry, a Remainer, wants to build on the dislike for the deal on all sides to cobble together some semblance of a national consensus against it.

The way to address that, says Soubry, is through a second referendum. Make the question simple again — Yes or No on the deal as it stands now.

The call for a people’s vote has grown louder in recent days as many struggled to imagine how the country avoids chaos of a deal rejected by Parliament, and how to get past the divisions. 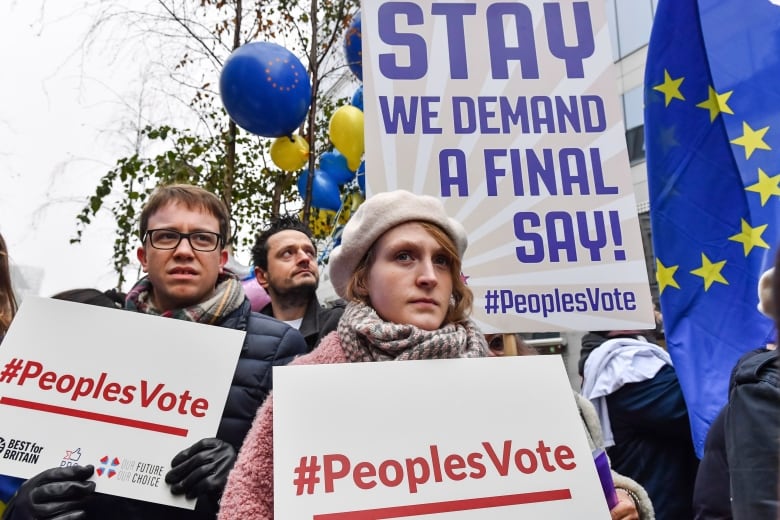 In a sign of the intra-party splintering over the deal, Soubry joked about whether she truly represents the Conservative party. When asked whom he represented, Umunna dryly says “Streatham,” — his constituency.

They both represent a growing number of people who believe the country is headed for danger.

“I’m very worried about my country,” said Umunna in an interview.

That’s why it’s “absolutely right” Soubry told CBC News, “to go back to the people for that final say on what we now see the reality of Brexit to be.”

Faced with a choice between the existing deal and the status quo, she said “most people will see the reality and they will choose remain.”

Pollsters say there may be a basis for consensus; both Remainers and Leavers dislike this particular deal. May, however, has repeatedly rejected the idea of a second vote. The country may still be forced into one if Parliament puts a stop to her plan.

For now, she said she is committed to seeing it through. Inside the Commons and out, she will “make the case for this deal with all my heart and I look forward to that campaign.”

The debate will be had. Since the 2016 campaign, the opinions and grievances around Brexit have multiplied. May now presides over a full-throated airing of every one of them.