Arron Banks’ insurance firm and Leave.EU have been slapped with fines totalling £135,000 for data breaches in the Brexit campaign.

The Information Commissioner said the organisations were guilty of serious breaches of the law, as she unveiled her hotly-anticipated report today.

While over 300,000 emails were sent to customers of GoSkippy containing a Leave.EU newsletter.

The Information Commissioner Elizabeth Denham today told the culture media and sport select committee the organisations could be slapped with further, bigger fines if their audit finds more wrongdoing.

Mr Banks hit back at the findings on Twitter, writing: ‘Gosh we communicated with our supporters and offered them a 10% Brexit discount after the vote! So what?’

The findings pile more pressure on Mr Banks – the self-styled bad boy of Brexit – is facing a criminal probe about the source of the £8million he ploughed into the Brexit campaign. 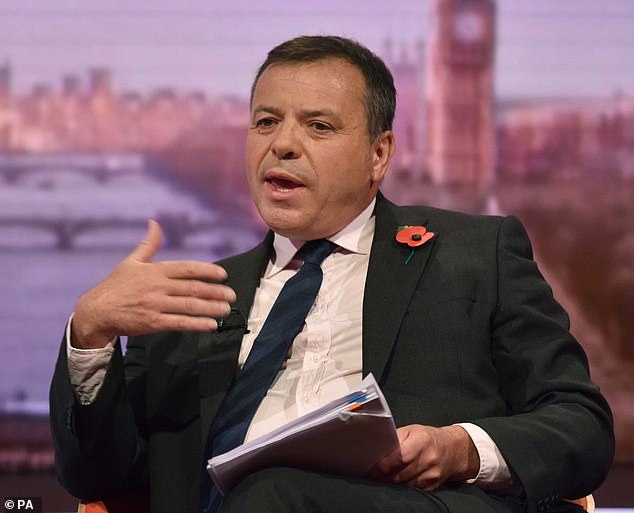 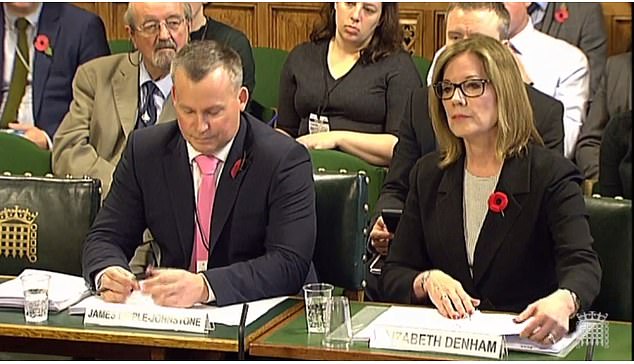 Information Commissioner Elizabeth Denham (pictured, right, today in front of the DCMS select committee in parliament) said Leave.EU and Eldon Insurance could be slapped with further and bigger fines if the results of their audit finds further wrongdoing

Arron Banks, who dubs himself the bad boy of Brexit, hit back at the findings today on Twitter 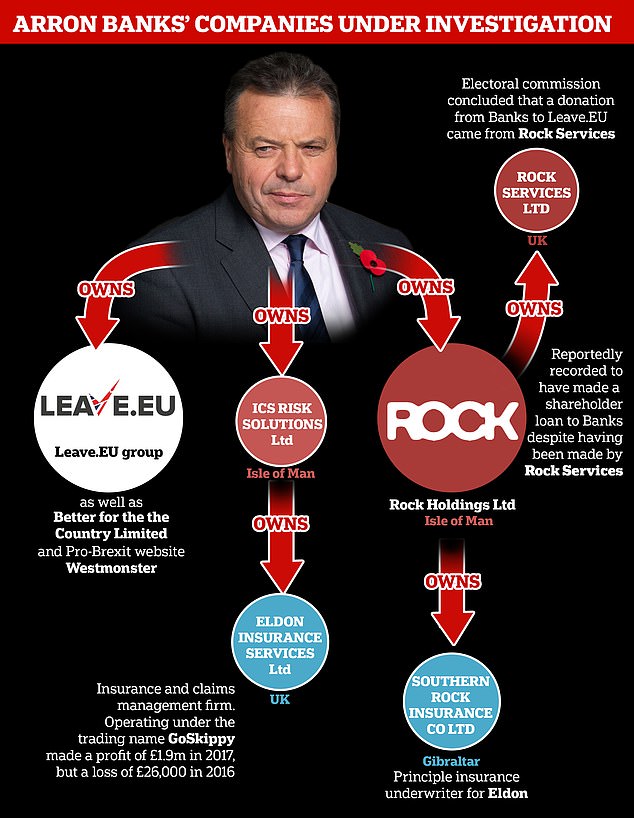 Today’s findings heap more pressure on Arron Banks, who  facing a criminal probe about the source of the £8million he ploughed into the Brexit campaign (pictured, a graphic illustrating the insurance tycoon’s business interests)

Critics have suggested the money could have come from Russia as the Kremlin wanted to sew discord in Europe by seeing Britain break away from Brussels.

A report published by the ICO today said Mr Banks’ organisations were guilty of ‘serious breaches’ of privacy and data protection laws by using each other’s details to drum up business and support for the other.

What are the accusations surrounding Arron Banks and the funding of the Brexit campaign?

Arron Banks is accused of financing loans to Leave.EU from illegal sources.

The Electoral Commission’s review said that, as well as having reasonable grounds to suspect he was not the true source of the cash, loans involved a company, Rock Holdings, based on the Isle of Man. This is banned under the rules.

While the Electoral Commission does not name Russia or any other possible source of the money, Mr Banks has repeatedly denied a link to the Kremlin.

The watchdog said it suspected Mr Banks, and Leave.Eu chief executive Liz  Bilney and others involved in the campaign to have concealed the true details of the financial transactions.

It believes a number of criminal offences may have been committed and passed it to the National Crime Agency.

It said its investigation relates to suspected electoral law offences.

It said: ‘We issued a notice of intent to fine both Leave.EU and Eldon Insurance (trading as GoSkippy) £60,000 each for serious breaches of the Privacy and Electronic Communications Regulations 2003 (PECR), the law which governs electronic marketing.

‘More than one million emails were sent to Leave.EU subscribers over two separate periods which also included marketing for GoSkippy services, without their consent.

‘We also issued a notice of intent to fine Leave.EU £15,000 for a separate, serious breach of PECR regulation 22 after almost 300,000 emails were sent to Eldon Insurance (trading as GoSkippy) customers containing a Leave.EU newsletter.’

In one incident in September 2015 a Leave.EU newsletter was sent to more than 319,000 email addresses on Eldon’s customer database.

A Leave.EU spokesman said: ‘The ICO notice of intent to fine us and due process for a right to reply has effectively been sabotaged by leaking the findings to the press and publishing in advance of the Information Commissioner’s appearance today before the Collins committee.

‘We have today been notified by the ICO that we have received a £60,000 fine over the accidental transmission of a Leave.EU newsletter to a number of potential ‘GoSkippy insurance’ customers.

Eldon Insurance, the firm which trades under the name GoSkippy, said that it had only received the ‘notice of intent’ from the ICO at 4pm on Monday and would be making representations concerning its findings.

Leave.EU told the ICO it was the result of an error in the email distribution system which it reported, but the ICO said it had no record of any such incident being reported to it.

The ICO also found Leave.EU sent emails to its subscribers promoting Eldon, which trades as GoSkippy.

The information Commissioner today blasted Facebook for failing to protect the data of the billions of users it has worldwide.

Elizabeth Denham said the social media giant still has a long way to go in improving its systems.

It comes after she slapped the tech giant with a £500,00 fine – the highest possible –  after the data of up to 87million users was improperly shared with Cambridge Analytica.

Ms Denham said that if new, tougher laws were in pace at the time when Facebook was fined then the financial punishment would have been far steeper.

She told MPs today: ‘I think Facebook has a long way to go to change practices to the point where people have deep trust in the platform.

‘I understand the way we live our lives online now is here to stay. But Facebook need to significantly change their business approach to maintain trust.’

‘We issued the highest possible fine under the previous legislation which we could impose for the Cambridge Analytica breaches.’

And she backed calls for Mark Zuckerberg – Facebook’s fonder and CEO – to be hauled in front of MPs on the committee to give evidence.

She said: ‘I think it would be very helpful to have Mr Zuckerberg appear.’

More than a million emails were said to have been sent between February and July 2017 which included the company’s banner and a discount offer for Leave.EU supporters.

It followed an email sent in August 2016 to 49,000 addresses on the Leave.EU database announcing a sponsorship deal with GoSkippy.

In an appearance in front of the DCMS select committee today, Ms Denham said they fear there could be ‘ongoing misuse of personal data’ at Eldon.

She said their investigation indicates ‘a failure to keep separate the data of insurance clients and messaging to potential supporters and voters and Leave.EU data.’

And she slammed Ukip for refusing to talk to the ICO for their investigation.

She said: ‘We had hoped…they would speak to us. It has been frustrating for us that we haven’t been able to follow that line of inquiry in our investigation.’

She also tore into Facebook for its role in the Cambridge Analytica scandal – which saw the details of 87million users improperly shared with the now wound-up firm.

And she backed calls for Mark Zuckerberg – Facebook’s fonder and CEO – to be hauled in front of MPs on the committee to give evidence.

She said: ‘I think it would be very helpful to have Mr Zuckerberg appear.’

She said that across the worlds of tech, politics and data sharing groups, not enough attention is given to protecting people’s data.

She added: ‘We really need to tighten up the system.’

The findings heap fresh pressure on Mr Banks who is already facing tough questions about whether the £8m he ploughed in the Brexit campaign came from legal sources.

He defiantly appeared on TV on Sunday to insist there was ‘no Russian money and no interference’ after the National Crime Agency – Britain’s FBI – launched an investigation into where the money came from.

The Leave.EU co-founder told BBC One’s Andrew Marr Show that all the cash came from a UK-registered company, Rock Services. 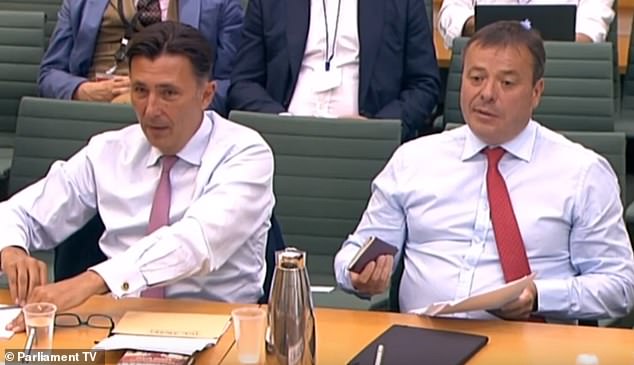 But Commons Culture Committee chair Damian Collins has pointed out that Mr Banks had previously told MPs the company existed to provide services to his other enterprises, and generated no cash of its own.

The Electoral Commission’s review of referendum finances focused on £2million reported to have been loaned to Better For The Country by Mr Banks and his insurance companies and a £6million donation which he made alone.

An NCA probe has been launched into ‘suspected criminal offences’ after the Electoral Commission said it had reasonable grounds to suspect that Mr Banks was not the true source of the cash.

Ms Denham told today’s select committee that the scale of her organisation’s probe into the misuse of data is ‘unprecedented’.

Lib Dems accused of selling the personal data of its party members for £100,000 to Remain campaign

The Lib Dems have been accused of selling the personal data of its members for £100,000 to an anti Brexit campaign group.

The Information Commissioners Office (ICO) said it had received allegations that the party sold the data to Britain Stronger in Europe (BSiE), and a linked data broker.

The Lib Dems deny the allegations and say they w ere working with another organisation to provide an enhanced electoral register service.

The ICO’s report, published today, states: ‘During the course of our investigation, we obtained information that the Liberal Democrats had sold the personal data of its party members to BSiE for approximately £100,000.

‘In June and July 2018, we served information notices on Open Britain, the successor organisation to BSiE, and the Liberal Democrats, under the DPA1998, to investigate these issues.

‘In response to our information notices, the Liberal Democrats stated that they had worked with a third party group which took subsets of the electoral register – which the party was entitled to access – and carried out a simple enhancement service, for example, adding phone numbers where available.

‘The party had further worked with BSiE to model electoral roll data, with a view to highlighting potential voting intentions.

‘Both the Liberal Democrats and Open Britain denied that party members’ personal data had been sold.

‘Instead, both confirmed that the In Campaign bought Electoral Register information from the Liberal Democrats.

‘We are still looking at how the Remain side of the referendum campaign handled personal data, including the electoral roll, and will be considering whether there are any breaches of data protection or electoral law requiring further action.’

Putin thanks Trump for stopping terrorism in Russia

Thunbergs father: Greta is happy, but I worry