By the time Lance-Cpl. James Ernest Muth sailed from Britain back to Canada in the spring of 1919, he had suffered gas attacks and shrapnel wounds. Having fought from Vimy Ridge to Amiens, he returned home to Ontario with painful memories of the Great War.

As traumatic as those experiences were, efforts to help him overcome the strain of what he had endured also gave him an unlikely skill: the ability to do intricate needlework.

Like many other British Empire soldiers injured in the First World War, Muth was hospitalized in England. While recovering, he was introduced to stitching by women from Britain’s Royal School of Needlework and helped make an embroidery that found a home on the altar at London’s famed St. Paul’s Cathedral.

“Both hands were terribly wounded and it was good therapy,” his son, Malcolm Muth, said at his home in Port Dover, Ont. 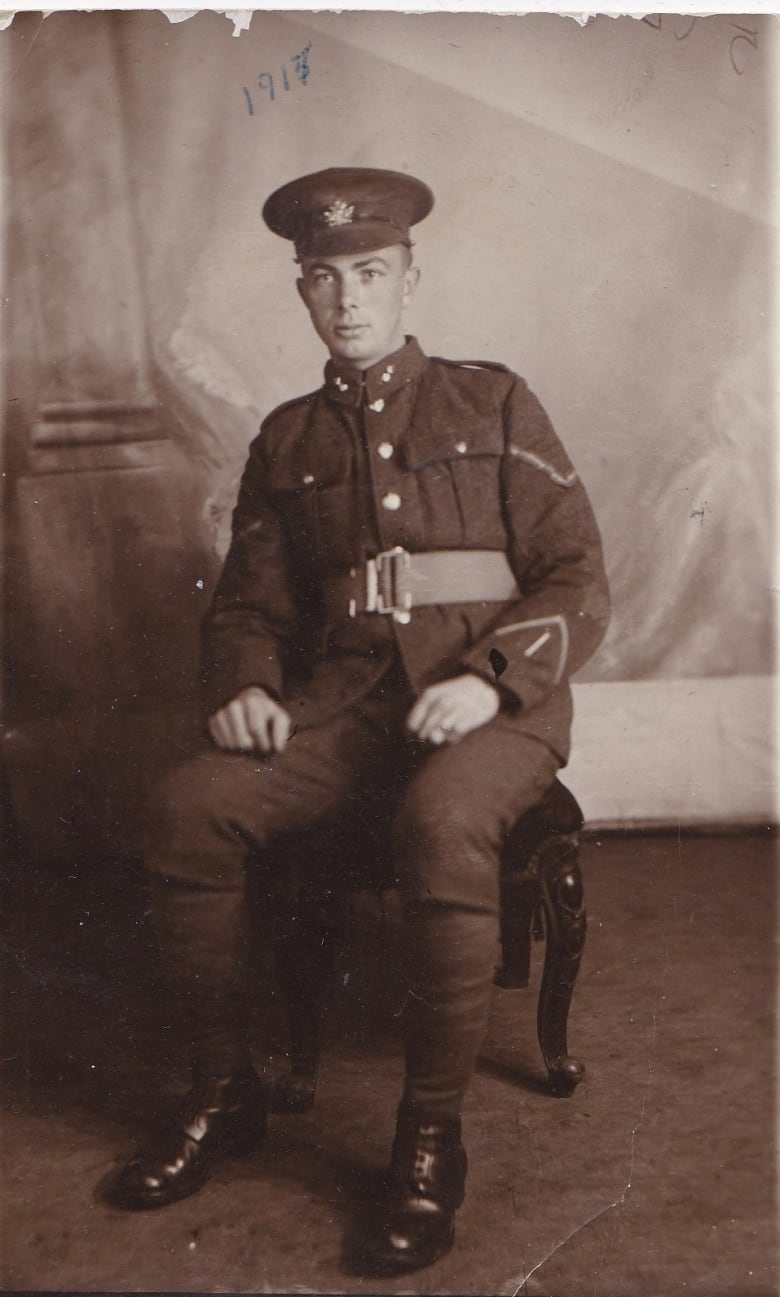 The altar cloth was long feared destroyed. Now, its history is being stitched together piece by piece and a volunteer historian at St. Paul’s is finding the Canadian connections run deep.

“My latest research is suggesting that the first embroiderers to begin work were Canadians,” said Jane Robinson.

Today, the colourful, three-metre wide embroidery sits behind glass in a wooden frame marked “lest we forget.” It serves as the cathedral’s main display commemorating the centennial of the First World War.

Robinson, who describes herself as a friend of St. Paul’s, has spent the past four years researching little-known details of the embroidery’s past.

“Much of the precise history behind the making of the altar frontal … is, sadly, lost to time,” Stephen Barnard wrote in a 2016 book, From the Hands of Heroes, published by Memory Lane Media.

The embroidery is the work of 138 First World War servicemen from Britain, Canada, Australia and South Africa. Wounded in battle, they were taught in hospitals across the U.K. to stitch as a way to improve dexterity and overcome post-traumatic stress disorder.

“The convalescing servicemen at the military hospitals – all dressed uniformly in their ‘hospital blues’ of a blue jacket, blue trousers, a white shirt and a red necktie – would find solace, inspiration and a measure of pride,” Barnard wrote.

“The act of sewing would add focus and purpose to their recovery, while improving their hand co-ordination and allaying boredom and melancholy.”

James Muth is known to have embroidered a yellow tulip for the altar cloth, but it’s unclear exactly which one. (Thomas Daigle/CBC)

Muth embroidered a yellow tulip while other soldiers stitched birds, flowers, a chalice and other motifs. At least 14 Canadians contributed to the altar cloth, according to signatures reproduced in a memorial book on display at St. Paul’s.

The Royal School of Needlework in London pieced together the stitchings collected from hospitals across Britain.

“Women are … the hidden heroines of this story,” Barnard told CBC News. They’re credited as the volunteers who helped the soldiers learn needlework.

“These women were never really acknowledged,” Barnard said, “because we don’t know who they are.”

From the Stanley family?

The cloth was spread across the altar at St. Paul’s ahead of the U.K.’s post-war national service of thanksgiving in 1919, attended by King George V.

Robinson suspects the family of another Briton familiar to Canadians was behind the project.

“The latest research suggests that it was a gift from the Stanley family,” she said, alluding to Frederick Stanley. 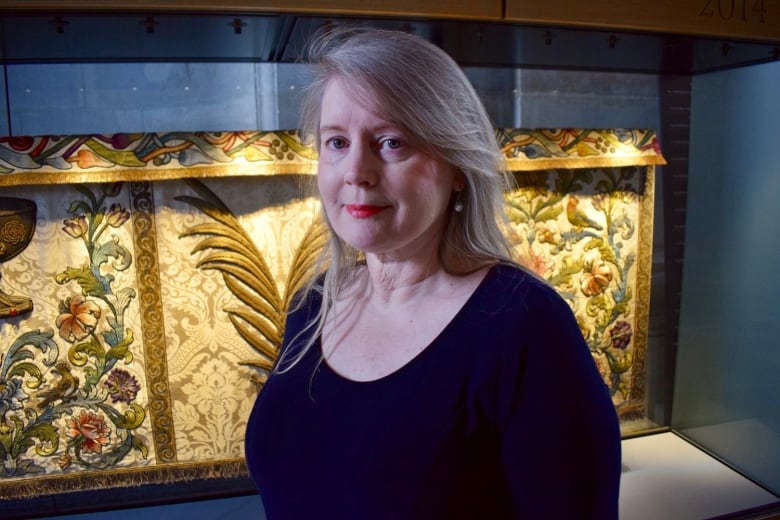 Jane Robinson has spent four years combing through archives and reaching out to families of First World War soldiers to uncover the history of St. Paul’s altar frontal. (Thomas Daigle/CBC)

He was the same British-born governor general of Canada from 1888 to 1893 who gave North American hockey its top prize.

“They decided to put together an altar frontal in the hope that it would actually be used in the chapel,” she said.

James Muth’s son Malcolm recalls hearing his father talk about “how much he’d learned and how he’d enjoyed it.”

‘Good with his hands’

After further recovery in hospital in Burlington, Ont., in 1919, James Muth took up carpentry. His son says the embroidery therapy “gave him dexterity.”

“He became awfully good with his hands,” Malcolm Muth said.

James Muth died in 1976 believing the altar frontal had been lost. 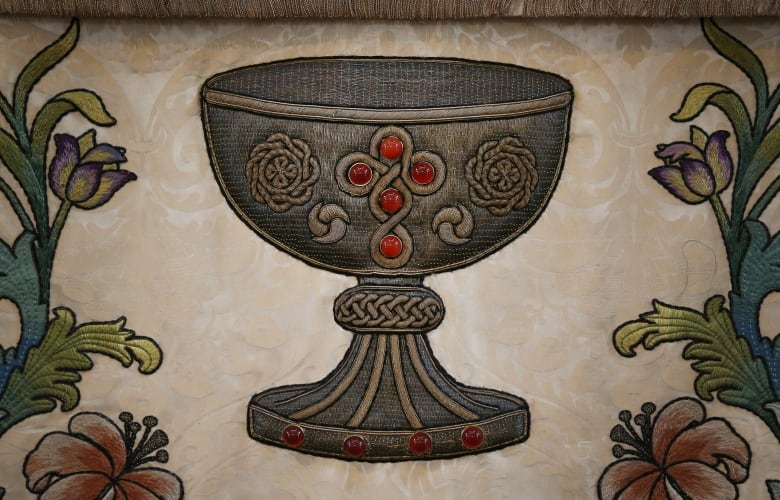 The embroidery work by First World War soldiers on the altar frontal on display at St. Paul’s Cathedral in London includes a chalice. (Peter Macdiarmid/Getty Images)

For decades, the Muth family wasn’t aware that the altar cloth had put in safekeeping and was not damaged during the bombing.

But in 2014, James Muth’s granddaughter Anna Alonso received an email from St. Paul’s about her grandfather’s involvement in the altar frontal and how it had been kept safe.

“I couldn’t believe it,” she said. “It was astonishing.”

The embroidery was restored and put on display again in 2014 to mark 100 years since the start of the First World War.

“I don’t think we think enough about the people who came back with those terrible scars and wounds, both mental and physical,” said Rev. Canon Michael Hempel, who delivered the sermon at the 2014 rededication service and plays an outreach role for the cathedral.

“Here we have something which they were able to focus on to create, to lift them out of the awfulness of what they’d experienced,” he said. 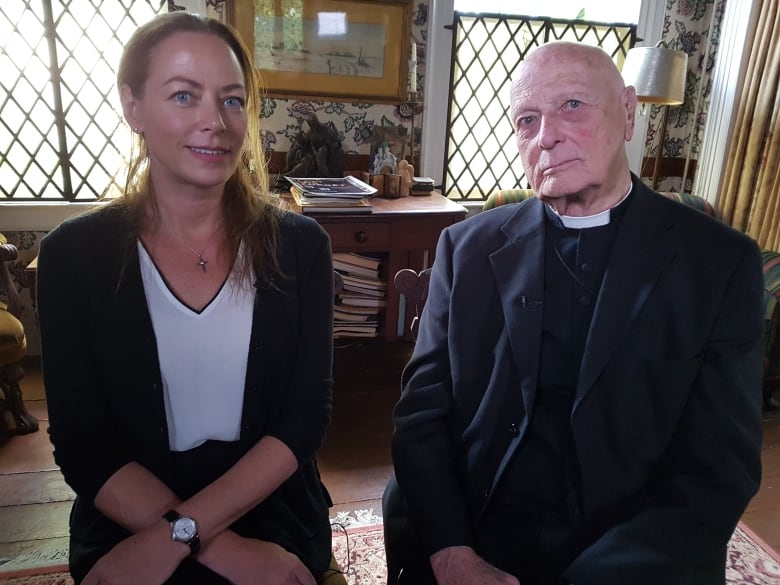 Anna Alonso and her father Malcolm Muth, a retired Presbyterian minister in Port Dover, Ont., learned in 2014 that the altar frontal had not been destroyed when St. Paul’s Cathedral was damaged during the Second World War. (Derek Hooper/CBC)

Alonso and her brother James Muth — a Royal Canadian Regiment lieutenant-colonel who was named after his grandfather — travelled to London for the rededication service.

“To stand before it and see it is a really emotional thing,” Alonso said.

St. Paul’s will use the embroidery again as an altar frontal at a special service on Sunday, 100 years after the armistice that ended the war. 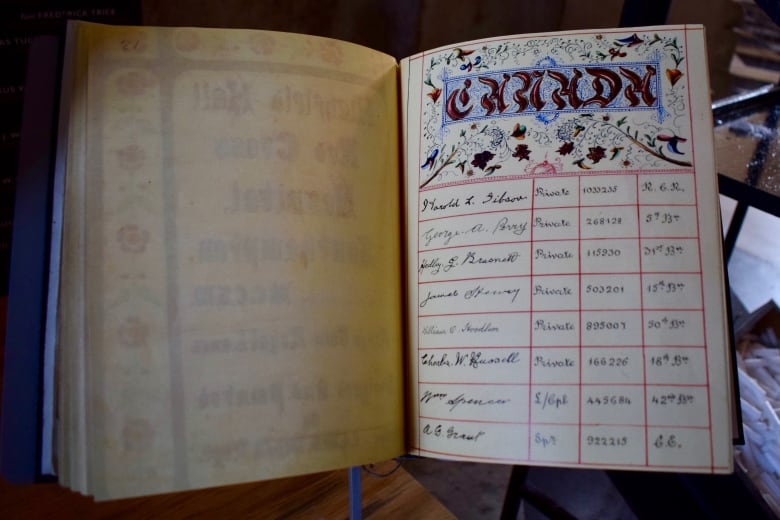 At least 14 Canadian servicemen worked on the First World War altar frontal. Their signatures are featured in a memorial book, reproduced and on display at St. Paul’s Cathedral. (Thomas Daigle/CBC)

It’s unclear, however, what will happen to the embroidery once First World War centennial commemorations are over. The cathedral only committed to keeping it on display until the end of this year.

Its delicate nature may prevent the embroidery from being transported to Canada or elsewhere for display, Hampel said. But he says the piece will always be accessible to visitors in some way.

“Something of great beauty coming out of such great pain is something very important for us to remember.”

1 thought on “Beauty out of pain: How embroidery on a British altar cloth was therapy for battle-scarred Canadian soldiers | CBC News”