Armed police stormed the London HQ of Sony Music as terrified office workers cowered under tables when a fight broke out between two canteen workers in which one man was stabbed.

Sony employees heard screaming coming from the canteen on an upstairs floor of the office on Derry Street in Kensington, West London, which also houses Simon Cowell’s entertainment company. It is not thought he was there at the time.

A man was arrested and two people were injured, with one the casualties taken to a hospital and the other to a major trauma centre. His condition is not thought to be life-threatening.

Footage from the scene shows a casualty being wheeled away in a stretcher, while in another video shows a man being led away in handcuffs.

A Sony Music spokesman said: ‘Two members of the catering team were involved in a violent altercation. The incident is now in the hands of the Metropolitan Police.’ 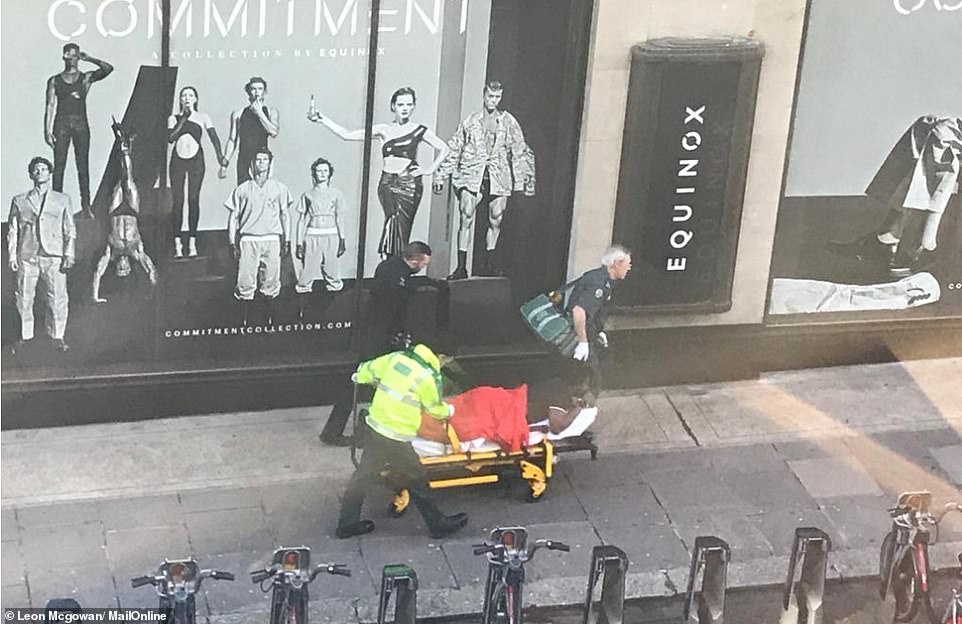 A casualty is wheeled out of the Sony office in Kensington, West London, after firearms officers stormed the building at around 11am 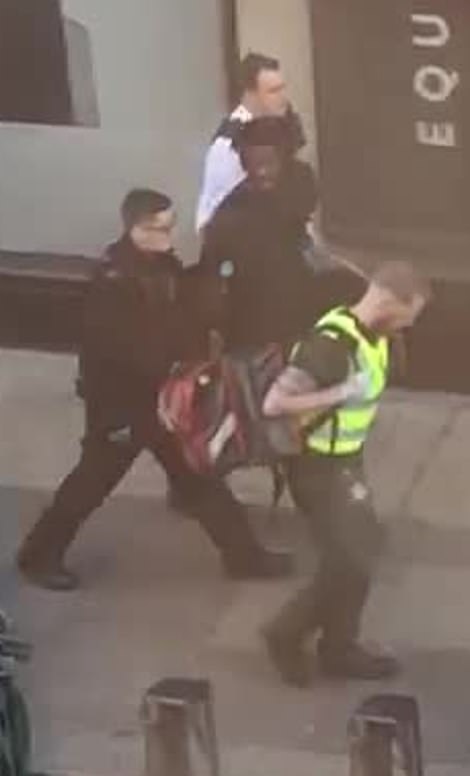 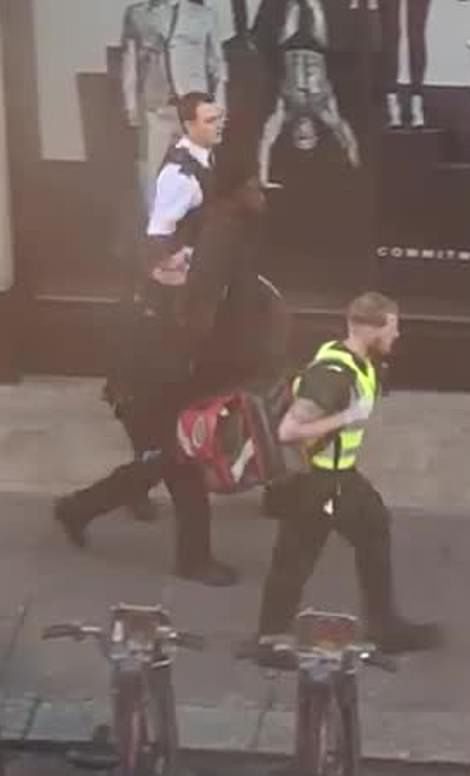 Shocked members of staff inside the Sony building told of the unfolding chaos as police ordered everyone to evacuate.

A Sony employee, who did not want to be named, said: ‘We just heard screaming and running and people slamming doors.’

The men, who are employed by a catering company, were ‘running round chasing each other’ and ‘slashing each other up’, he added.

A worker inside the building tweeted at just after 11am: ‘Under tables in a locked office in the Sony building and there’s banging and screaming downstairs. Freaking out!!!’

She later added: ‘There was a stabbing downstairs. All our remaining in our locked rooms but we think police are now here.’

Another Sony worker told the Standard: ‘It was between two kitchen staff. They were in uniform.

‘There was a lot of shouting and commotion. It looked like they were having a fight. One had fallen over and was on his back and the other was standing over him. I thought he was raining punches down, but then I saw the knife.

‘It was about six or seven inches long, and he was standing over him trying to get him, stabbing downwards as the other man put his arms up to defend himself.

‘He was going nuts. There was a lot of shouting. Other staff were standing around – they didn’t want to get too close because he had a massive knife.’

He said he saw the victim, who worked for a catering contractor, stabbed in the upper thigh, before the pair were separated.

Photos showed a large number of police cars and ambulances in front of the building in the upscale neighborhood.

The witness said there were two areas of blood on the floor, while another woman appeared to have been slightly hurt after apparently falling over in the melee. 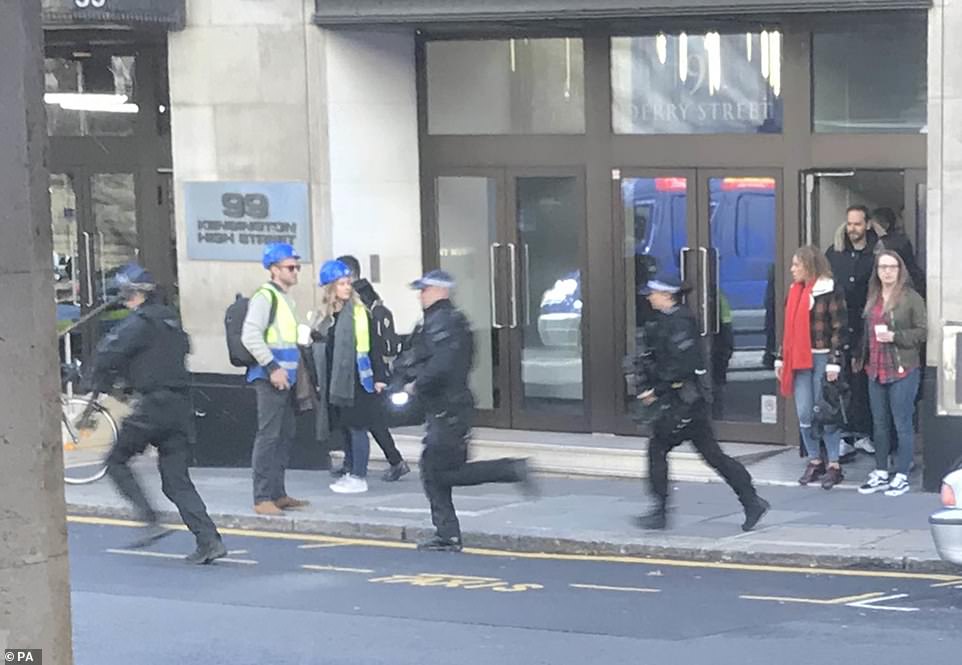 Armed officers sprint towards the building on Derry Street, which is just off Kensington High Street. The building was quickly evacuated 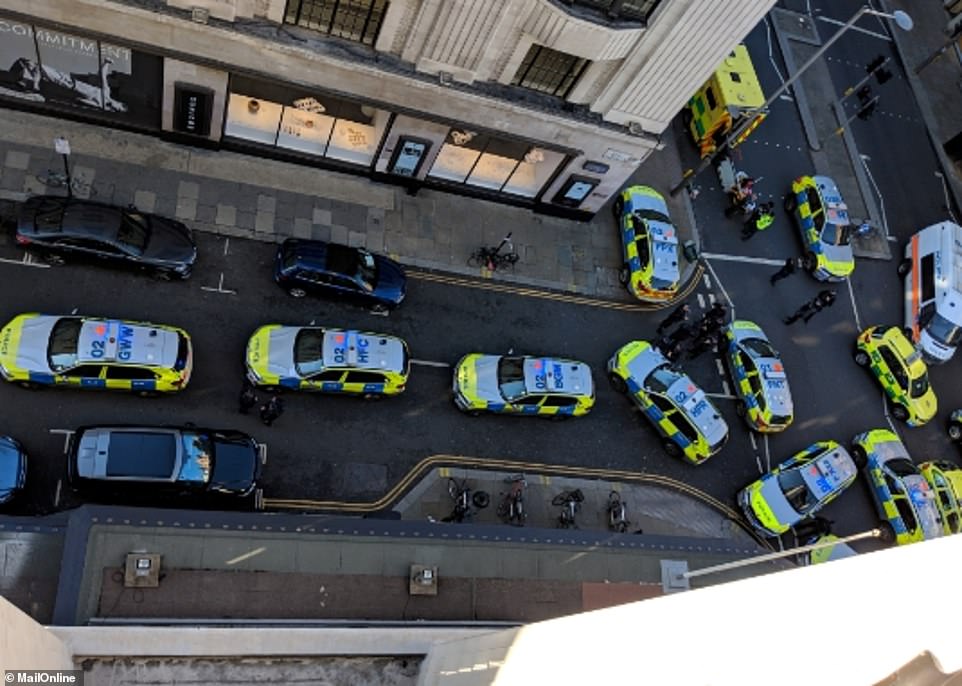 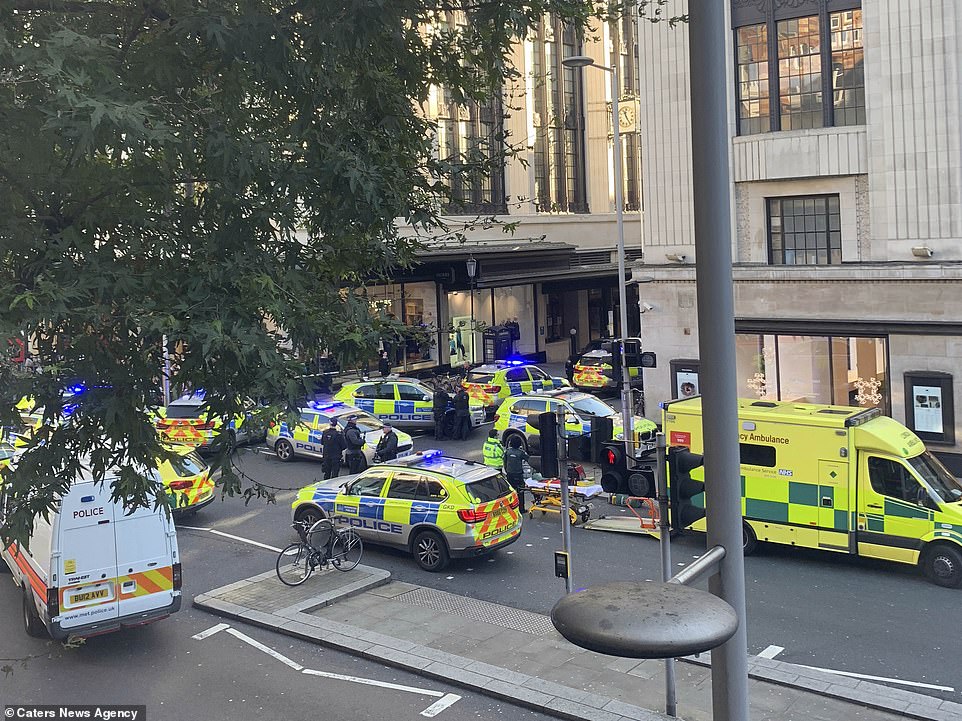 Derry Street is a short road of under 100 yards off Kensington High Street, an upscale shopping street in London’s richest boroughs. 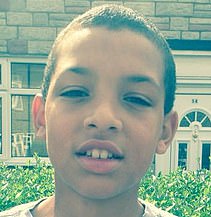 The number of murder investigations opened by the Metropolitan Police reached 116th last night after a wave of knife-related killings.

Jai Sewell, 15, (pictured) had left his home in Bellingham, south-east London, to buy a meal when he was followed by two men in a minicab who jumped out and stabbed him.

It ends in a cul-de-sac before a footpath joins Kensington Square Garden, one of the capital’s oldest garden squares.

‘Most were running, all towards Kensington Square Garden. Several were visibly panicked and some were screaming.’

Another Sony staff member told MailOnline: ‘I heard people screaming and everyone literally legged it, people started pouring out the emergency exits.

‘I don’t know the ins and outs but it was scary. I know there’s lots of knife crime but you don’t expect it to happen around here.’

Another added: ‘We just heard screaming in the canteen. Then we ran for the fire exit.’

Employees of the company were being interviewed by police outside the office.

By 2pm, there were several police cars still present and officers standing outside the building’s front door. 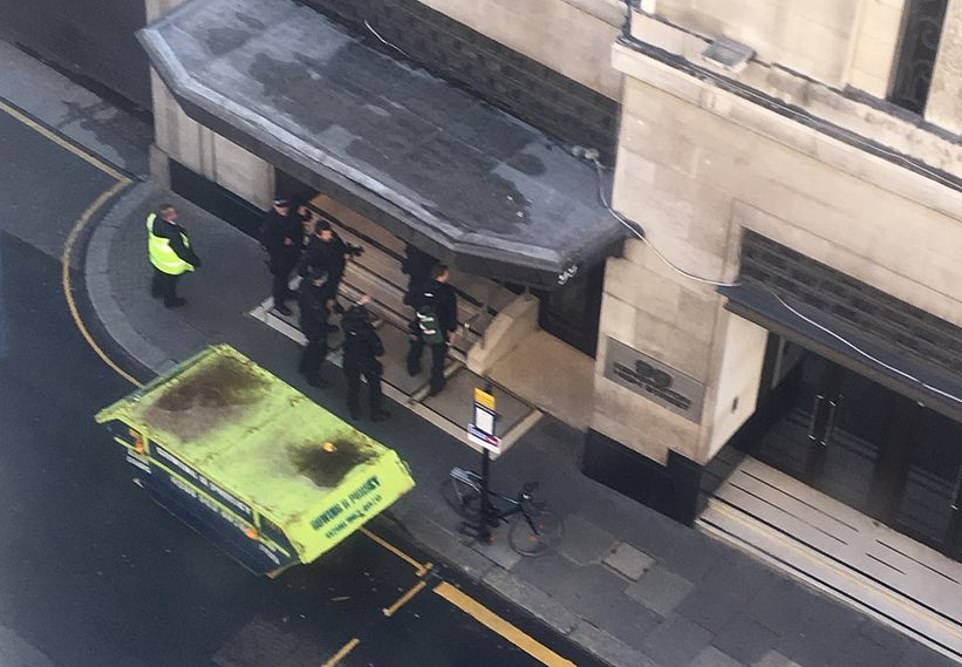 This image shows the moment armed officers entered the building. It was taken from an upstairs floor in the office opposite 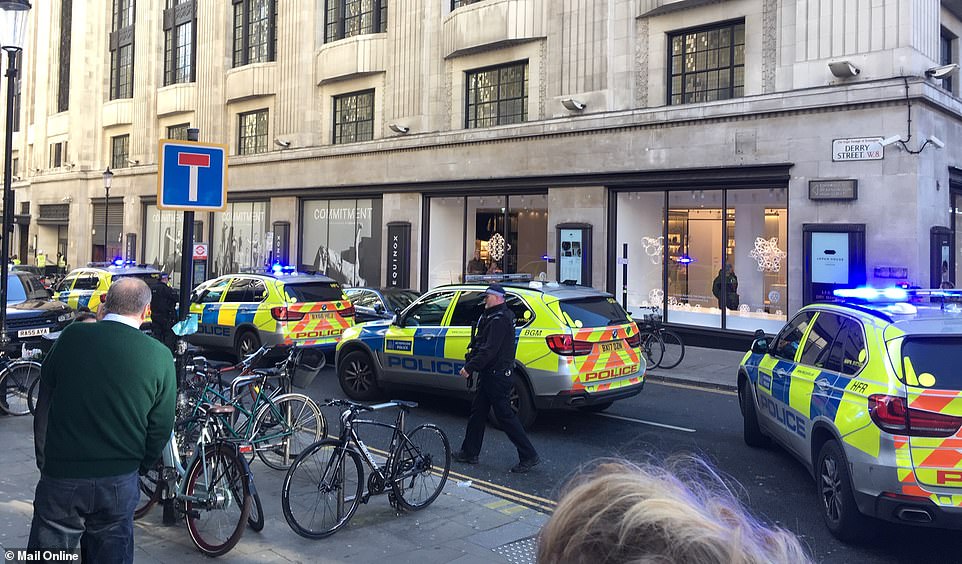 The incident comes amid a surge in knife crime in the capital, with 40,147 knife-related offences recorded from April 2017 to March 2018

Nearly 70,000 children have been wounded in stabbings and beatings in just one year as violence on the streets of ‘Wild West’ Britain continues to spiral.

Jackie Sebire, assistant chief constable of Bedfordshire police, revealed the shocking statistic yesterday as she lamented the ‘constant torrent’ of murders and knife attacks unfolding in the UK.

In the year to June there were 69,000 child woundings, where a youngster aged 10 to 15 was stabbed or seriously injured, a rise of 4,000 on the previous year.

Mrs Sebire, the National Police Chiefs’ Council spokesman for serious violent crime, said: ‘I’ve worked in some really challenging London boroughs. This is different, this level of violence, this constant torrent of every single day there is another stabbing, that we can’t seem to get ahead of.’

Police chiefs believe they are at a turning point, after years of struggling to meet high public expectations and soaring demand.

Recorded crime has risen by 9 per cent – including rocketing levels of knife crime and robbery – as 22,000 officers were lost from the frontline.

Statistics released earlier this month show the number of homicides nationwide is up from 630 to 719, with overall recorded crime up by almost 10%.

The number of offences registered as involving a knife or sharp instrument, 39,332, was the highest since 2011, when comparable records started.

Other witnesses who saw the incident unfold from outside the Sony HQ described hearing shouting before dozens of people poured out after police arrived.

A construction worker said: ‘I saw lots and lots of police arriving and I told my colleague to go take a look ad he said he saw a man dragging a woman from the building by the arm, she look scared. But he could be protecting her, I can’t say.’

Trish Ellis, a personal assistant at the Mail on Sunday, said: ‘It started opposite our building in Derry Street, usual sirens and racket but then we heard shouting, and more and more sirens.

‘A few people came out, then armed police were going in six-plus at a time, and more and more of them, but they seemed to be keeping people in the building.

‘Gradually they started to release people in tens, twenties, and a stretcher turned up with all the medical kit on it, but just stayed outside.’ 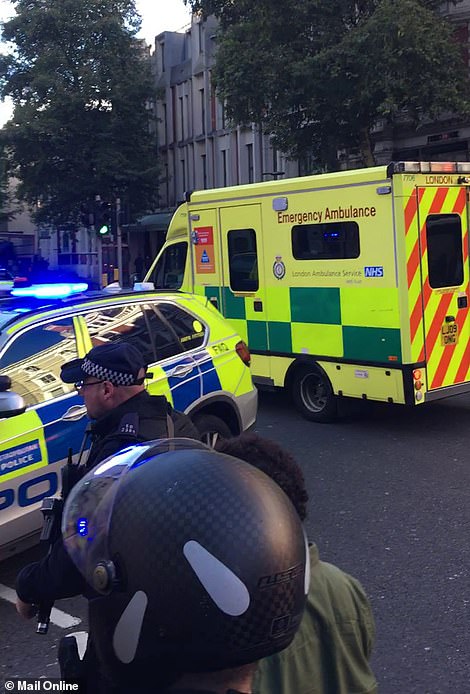 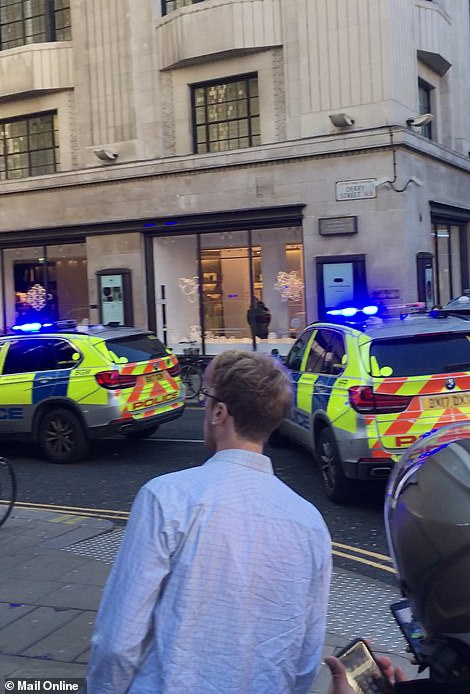 Police, who are seen here on Kensington High Street (left) and on Derry Street (right), said the incident was not terror related 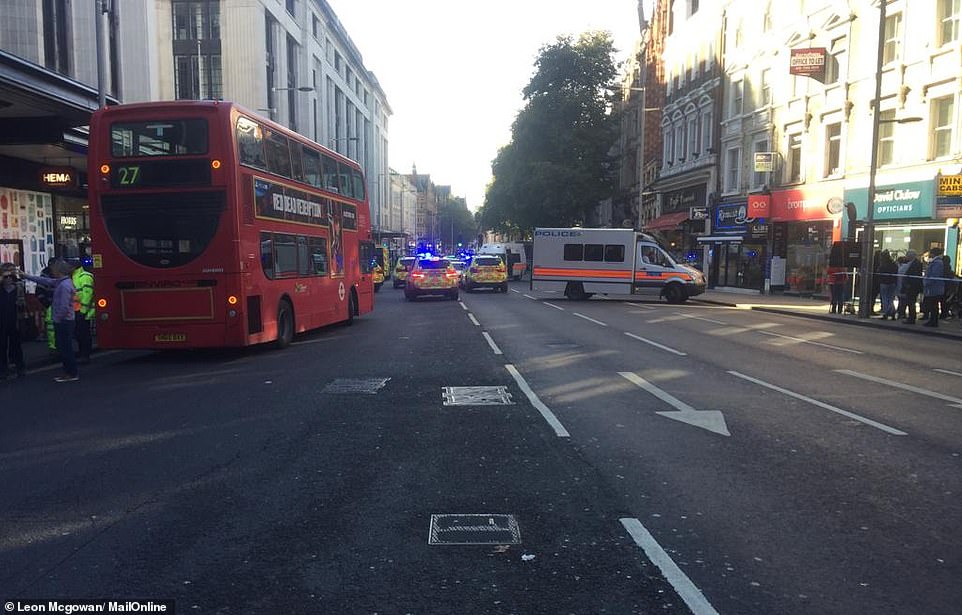 Derry Street is just off Kensington High Street, which is at the centre of the capital’s richest borough

The Metropolitan Police said: ‘Officers were called at approximately 11:00hrs on Friday, 2 November to reports of an incident in Derry Street, W8.

‘Officers, including firearms officers, and London Ambulance Service are in attendance. Evacuations are in place as precaution.

‘At this time we believe two people have suffered injuries. Officer remain on scene and the incident remain ongoing.’

The building at 9 Derry St. contains the offices of Sony Music and associated music companies, including Simon Cowell’s Syco Entertainment.

A London Ambulance Service spokesman said: ‘We were called at 11:01 today to Derry Street, W8, to reports of an incident.

‘We sent an incident response officer, two single responders in cars and two ambulance crews to the scene.

‘We treated two people at the scene. We took one to hospital and one to a major trauma centre.’ 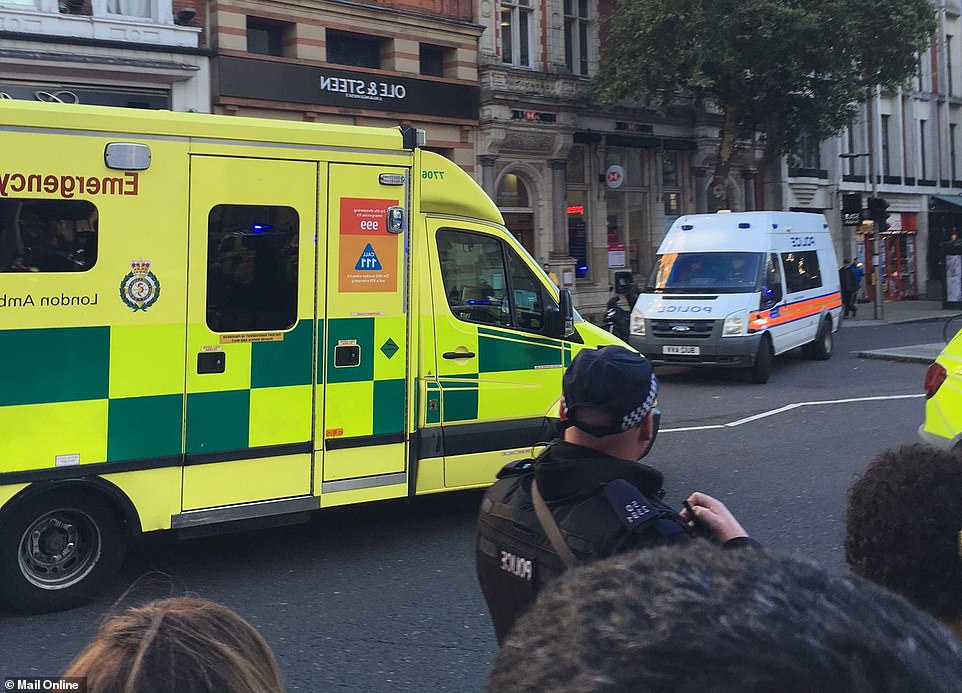 Police and an ambulance on Kensington High Street where the road meets Derry Street. The Metropolitan Police said: ‘Officers were called at approximately 11:00hrs on Friday, 2 November to reports of an incident in Derry Street, W8’ 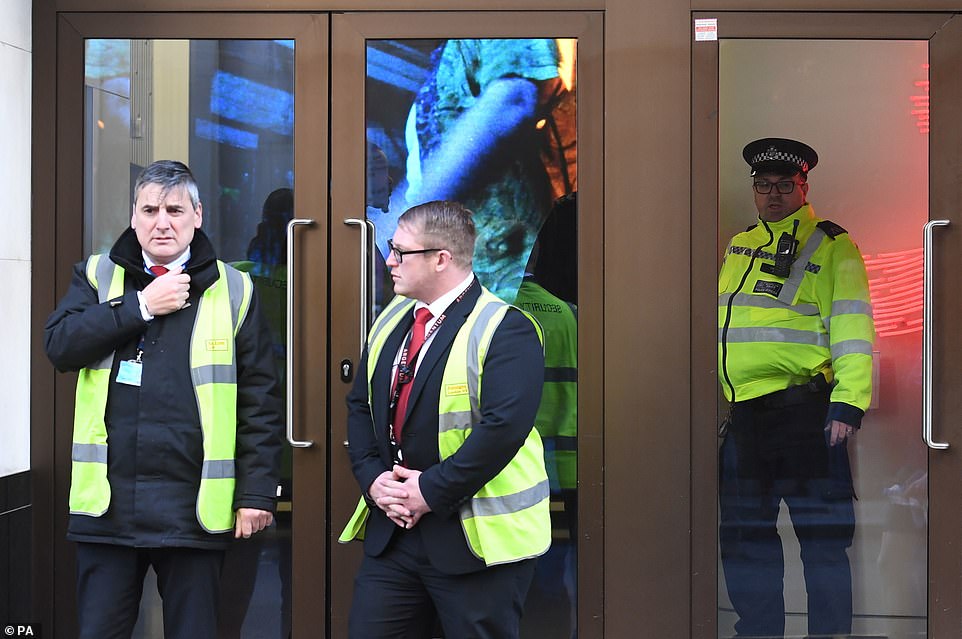 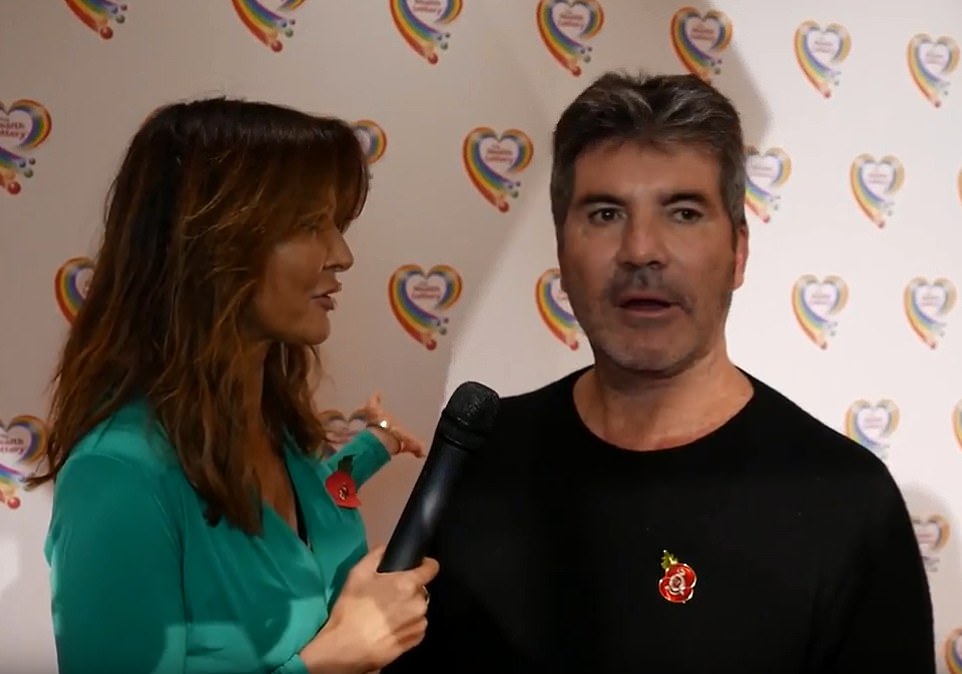 The Sony building also houses Simon Cowell’s entertainment company. He is seen at the Health Awards on Wednesday and is not thought to have been in the building today